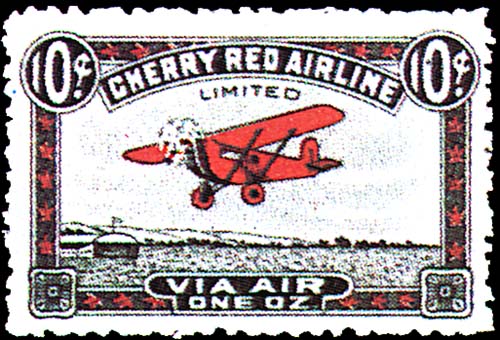 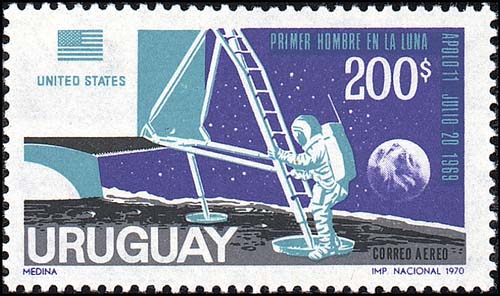 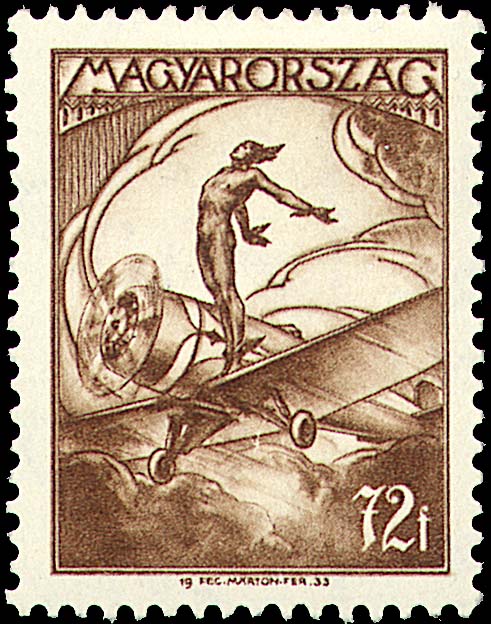 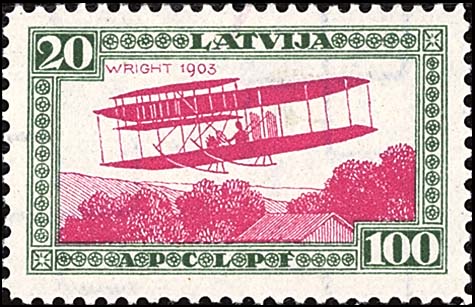 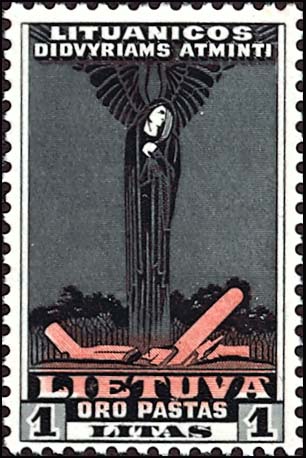 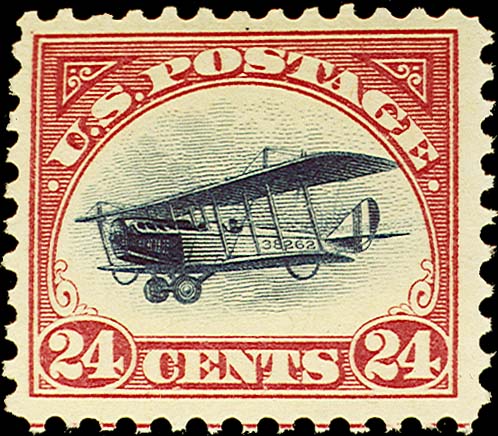 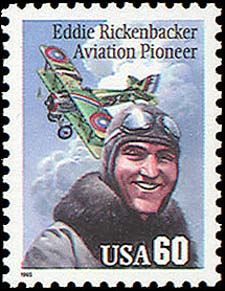 Is this 60¢ Eddie Rickenbacker stamp, Scott 2998, really an airmail stamp? 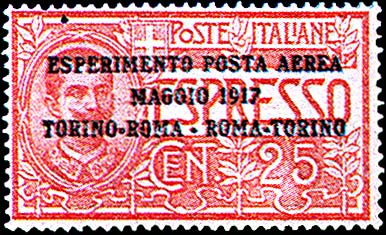 Airmail stamps, once a staple of new issues, today are mostly part of a bygone era, having fallen victim to the general success of aviation.

Icarus, Montgolfier, Lilienthal and other occasional sports managed to slip the surly bonds of Earth and take to the skies, but their methods were ill-suited for use by the masses of the earthbound.Once upon a time there was a world in which humans were confined to the ground, fated to casting envious eyes at the birds, bats and bugs that soared effortlessly through the sky above them.

Then came the genius of a couple of bicycle-repairing brothers from Ohio who gave the world wings.

The first airplanes were fragile constructs of wood, wire and fabric, and the men and women who flew them were steely-eyed, nerveless adventurers, half carny and half grease monkey, with a general disregard for the possibility of sudden violent death. In that era, airmail service for a letter was something special, commanding a special stamp to denote it.

Airmail stamps are postage stamps that are issued to indicate prepayment of delivery of mail by air.

In the early years of the 20th century, the preponderance of mail moved by various means of surface transportation: truck, train, motorcycle, bicycle, pneumatic tube, ship, pack horse, mule train, courier and, if the stamps of Sudan are to be believed, by camel.

Except for short distances, airmail was the speediest and most direct way of transporting the mail from point A to point B (assuming that the plane didn't crash), but it was relatively expensive.

Airmail stamps often include an aviation theme in their design in addition to an airmail inscription.

While the preponderance of world postal authorities have made use of airmail stamps, it is interesting to note that Great Britain, inventor of the postage stamp, has not issued a single airmail stamp.

In the Scott catalogs prior to 1940, all stamps, regardless of classification, were assigned an unprefixed number.

In 1940, the Scott catalog underwent a major revision, and stamps that paid for other or additional services or paid additional fees were given a separate set of numbers that were prefixed by a letter designating the stamp's purpose.

These stamps were grouped in alphabetical order by prefix at the back of the listings after the regular postage stamps, earning the sobriquet, back-of-the-book stamps.

Since 1940, airmail stamps have been prefixed by the letter "C." They are arguably the best known of all back-of-the book stamps.

Hybrid stamps that provide for airmail service plus pay for additional services and fees have been issued by many nations.

In Stanley Gibbons catalogs, airmail stamps are numbered sequentially and chronologically with regular postage stamps but they are assigned the letter prefix "A."

The French-language Yvert et Tellier catalog numbers airmail stamps separately and groups them at the back of the listings, but it does not prefix the number with a letter

The German-language Michel catalog numbers airmail stamps sequentially and chronologically with regular stamps and includes a small airplane symbol beside the catalog number for its airmail listings.

The Sanabria World Airmail Catalogue, a discrete worldwide catalog just for airmail stamps, was last published in its entirety in the 1970s.

The world's first airmail stamp was issued by Italy in May 1917 for an experimental flight between Rome and Turin. The stamp, Scott C1 shown in Figure 1, was created by overprinting the 25-centesimo rose-red King Victor Emmanuel III special delivery stamp.

Austria was the second country to issue airmail stamps. The Austrians found time in the final year of World War I to issue two stamps for an airmail flight from Vienna to Kiev via Cracow and Lemberg (Lviv) on March 31, 1918. This was done by overprinting and surcharging regular postage stamps.

Those inclined to quibble with catalog listings might question why the first airmail stamp should be numbered C3 instead of C1.

Those inclined to quibble even further might question why this stamp is not designated CE1, since it paid both the airmail and the special delivery fees for the experimental airmail service between Washington, Philadelphia and New York.

Modern-day catalog editors are often saddled with the residue of decisions made 60 or more years ago. Changing the numbers today would cause more grumbling and confusion than it would be worth.

Because of the hazardous and romantic nature of aviation in its infancy, pilots who set records or made first flights often became national heroes and the subjects of airmail stamps. An example is Charles A. Lindbergh, honored on many postage stamps for making the first solo nonstop flight across the Atlantic Ocean from New York to Paris, on May 21, 1927.

U.S. postal regulations forbid honoring individuals who are still living. Since the U.S. Post Office Department could not put Lindbergh on a stamp in 1927, it did the next best thing. The 10¢ Spirit of Saint Louis airmail stamp, Scott C10, shown in Figure 3, pictures the airplane in which the Lone Eagle made his flight superimposed on a map showing his route.

Other pioneering American pilots who have been honored on U.S. airmail stamps include Amelia Earhart, the Wright Brothers, Wiley Post, Blanche Stuart Scott and Harriet Quimby.

Two Lithuanian national heroes, Capts. Steponas Darius and Stasys Girenas, on July 15, 1933, attempted the first nonstop flight from New York to Lithuania. They successfully crossed the Atlantic and covered 2,984 miles in 37 hours, but they crashed in Soldin, Germany, less than 300 miles short of their target. Both pilots died in the crash and became national heroes.

In Figure 4, the Dark Angel of Death broods over the wreckage of their plane,Lituanica, on the 1-litas black-and-rose airmail stamp, Scott C82, from the six-stamp set issued by Lithuania in 1934.

For lovers of art deco, the emergence of the airmail stamp corresponds to the height of the movement, and many airmail stamps offer charming examples. One such, the Hungarian 72-filler bister-brown Spirit of Flight on Plane Wing stamp, Scott C31, is shown in Figure 6.

There really is no direct connection between space flight and airmail stamps, but an inordinate number of the stamps picture space themes. A 200-peso Neil A. Armstrong Stepping Onto Moon airmail stamp, Uruguay Scott C372, is shown in Figure 7.

Certainly the great bulk of airmail has been transported by conventional airplanes. A smaller amount has been carried by balloons, autogyros and helicopters.

One type of airmail carrier that spawned a number of special stamps for its service is the zeppelin.

A number of countries, including the United States, issued zeppelin stamps to prepay postage for this service.

With more and more long-distance domestic mail routinely being transported by air, and short-distance mail moving by truck, the U.S. Postal Service discontinued domestic airmail service on May 1, 1977. At that time airmail and first-class mail had become virtually synonymous.

Because airmail service is now the norm for long distances, there is less and less rationale for issuing distinctive airmail stamps.

The USPS still issues stamps denominated for international airmail, but since 1991 it no longer inscribes them for airmail service. Since 1999, however, the stamp designs have included a tiny airplane silhouette.

Several U.S. airmail-rate stamps of 1991-99 lacking either an airmail inscription or an airplane silhouette are not listed as airmail stamps in the Scott catalog.