Stamp collecting has its own terminology

Figure 2. Marginal markings on a block of United States 10¢ Horse Racing stamps include plate numbers, a "Mail Early in the Day" instructional imprint, a Mr. Zip image and "Use ZIP Code" imprint, and ink registration markings. Click on image to enlarge.. 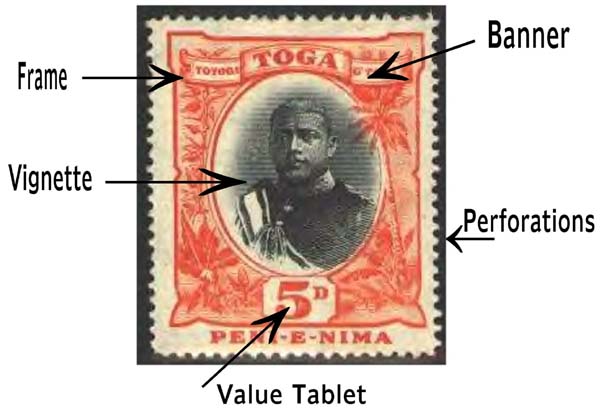 Stamps are small objects, but they can be surprisingly complicated.

Collectors have come up with specialized names for virtually every part of a stamp. The more specialized the collector, the more likely he is to spout a bunch of jargon and acronyms that you might not understand.

It is a bit like watching a medical drama on TV in which you spend half the time wondering what all those medical terms mean.

Fortunately, stamp terms are not as complicated as medical terms, but it is easy to be confused if you don't have a good grasp of some of the basic terminology. This column will summarize stamp design, marginal markings, perforations and gum.

The parts of a stamp design have special names.

A stamp's design can be made up of a frame and a vignette. The frame is the outer decorative ornament of the stamp design, while the vignette is the central part of the design. The vignette is usually a portrait, a scene or some other pictorial element.

There usually also is a value tablet. This is the part of the design that contains the price at which the stamp was originally sold by the issuing postal authority.

Other decorative elements also have names, such as a banner or scroll that contains the country of issue or that identifies the subject of the vignette. In Figure 1, the 5-penny King George II stamp, Scott 45, issued by Tonga in 1897, illustrates the stamp terms frame, vignette, banner, perforations and value tablet.

Stamps are generally printed in large sheets that can

Sheets and panes often have markings in the margins that are of interest to stamp collectors. These markings include plate numbers that identify the plate or plates from which the stamps were printed.

Marginal markings on the block of United States 10¢ Horse Racing stamps, shown in Figure 2, include plate numbers, a "Mail Early in the Day" instructional imprint, a Mr. Zip and "Use ZIP Code" imprint, and registration markings.

Printer imprints in margins can include logos, initials or other markings that identify the printer of the stamps.

Control markings are letters or numbers printed in the margins or sometimes even on the backs of stamps. These assist postal clerks in their accounting of the stamps.

Many other collectible inscriptions have been printed in stamp margins. In the United States this would include the cartoon figure of Mr. Zip encouraging the use of ZIP codes, "Mail Early in the Day" instructional inscriptions, arrows, electric-eye markings to guide perforators, registration markings, and initials of the siderographer, the individual who created the plate from which the stamps were printed, to name but a few.

When you consider all the fascinating information that has been printed in the margins, it makes you wonder why we ever bother to collect stamps.

A stamp is usually (but not always) printed with a margin between it and its neighbors on the sheet. How well centered the design is within its margins is a major factor in determining stamp grade and value. A stamp that is perfectly centered within the margins is much more desirable than one that is off-center.

In 1840 when stamps were first developed in Great Britain, they were printed in sheets of 240 subjects. When postal customers wanted to buy some stamps, they would go to the post office and a clerk would cut the stamps off the sheet.

This was time consuming, and if the clerk was not careful, stamps were sold with parts of the design cut or missing.

It was not long before the problem of separating one stamp from another was tackled, most notably by Henry Archer of Great Britain. Small holes were punched into the margins between the stamps, making it easy for a postal clerk or customer to tear them apart.

Those holes are called perforations, and perforations have a host of terms associated with them that describe their type, appearance or measurements.

Compound perforations are those where the tops and sides of the stamp have different measurements. The horizontal measurement is stated first followed by the vertical measurement.

In stamp parlance, rouletting has nothing to do with a spinning wheel in a gambling casino. Rouletting is another way of separating stamps.

Instead of punching holes between the stamp designs, rouletting applies a series of closely spaced cuts between them, allowing the stamps to be torn or pulled apart along the lines of the rouletting.

In stamp collecting, a grill is neither an appliance for outdoor cooking on lazy summer days nor the front of the automobile that allows air to cool the radiator.

Grills are patterns of parallel lines or dots that were impressed into postage stamps to break the paper fibers and allow them to absorb more cancellation ink, thereby preventing reuse of the stamp.

Gum, the part of the stamp that allows it to stick to the letter or parcel being mailed, has many terms associated with it. Gum that has to be wetted to be used is called moisture-activated. Gum that does not require wetting is called self-adhesive.

When looking at mint stamps, check the gum side to see if the stamp has ever been hinged or if the gum is cracked or discolored. These problems nearly always detract from the value of a stamp.

An exception is older stamps issued and used in a tropical country where heat and moisture-controlled storage was not possible and where tropicalized gum is the norm.

Stamps that are not stored properly can have gum that discolors or becomes toned or cracked. These conditions also detract from the value of a stamp.

Gum also has characteristics not related to condition, such as gum breakers. These are ridges that were impressed into the gum to help keep the stamps from curling.

Gum can also be shiny or dull, depending on the formulation used.

There are also seasonal gums. In the past, hard gum tempered with gelatin was sometimes applied to stamps that were to be shipped and used in the warm summer months when the air has a high moisture content. Soft, less moisture resistant, gum is called winter gum.

Some stamps have printing on the gum side. This practice is called backprinting. If the printing is on top of the gum, it will be ruined or lost when the stamp is used.

There is special terminology to distinguish the various types of paper used to make stamps. Each collector needs to know the definitions of the various papers as they apply to what he collects, including wove, laid, China, soft, hard, chalky, granite, pelure, native and rice.

It does take time to learn the jargon of stamp collecting, but one of the greatest aspects about the hobby is the willingness of its participants to help others. If you don't understand the jargon, ask for an explanation. It is a terrific way to learn, and you just might make a new friend.