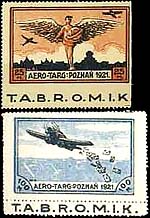 Figure 8. The Aero-Targ company issued these stamps in 1921 for airmail flights contracted with the Polish government. 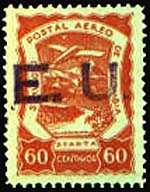 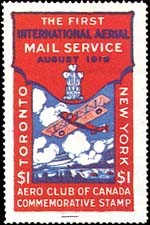 Figure 4. A Canadian Aero Club of Canada $1 red and blue local airmail, Unitrade CLP3, issued for a flight from Toronto to New York. 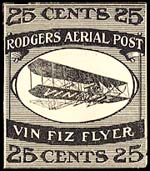 For those whose knowledge of airmail stamps is limited to what is listed in general stamp catalogs such as the Scott Standard Postage Stamp Catalogue, there is a whole vast world of other airmail stamps waiting to be explored.

Collectors who are not put off by the idea of collecting cinderella stamps can reap vast rewards in knowledge and enjoyment from this area of collecting.

Many of the stamps have striking designs, and there are often exciting stories behind the services that the stamps represent.

In fact, as the note in Scott explains, this 1877 issue was entirely private and local.

Balloons had carried mail from the besieged cities of Metz and Paris during the Franco-Prussian War, 1870-71, but regular postage stamps were used to pay for the service.

The world's first adhesive airmail stamp was issued in 1877 for a private flight by American balloonist Samuel Archer King.

The stamp, designed by J.H. Snively, was issued by John F.B. Lillard, a reporter in Nashville, Tenn., for use on mail to be carried on a flight from Nashville on June 18, 1877.

The Buffalo was not a powered balloon and was dependent on air currents for lateral movement. King reportedly dropped some of the letters that he carried over the side, in hopes that they would be found by someone along the route and deposited into the regular mail system.

The wind carried the Buffalo to Gallatin, Tenn., 26 miles from its starting point. The rest of the mail that was not thrown overboard during the flight was posted in Gallatin after landing.

The other American stamp listed in the Scott U.S specialized catalog as a semiofficial airmail is also really a private and local stamp.

In 1911 Calbraith Perry Rodgers traversed the country in his Wright EX biplane, named the Vin Fiz.

Rodgers had a short, if spectacular, career as a pilot. He passed his flight tests on Aug. 7, 1911, and was issued pilot's license No. 49 by the Aero Club of America. He completed the cross-country flight on Nov. 5, 1911. On April 3, 1912, he was killed in a plane crash while attempting to avoid a flock of seagulls.

Rodgers multi-leg cross-country flight was an attempt to win a $50,000 prize offered by William Randolph Hearst for the first flight across the United States to be completed in 30 days or less.

Rodger's flight was sponsored by the Armour Company, a meat-packing firm that was launching a new grape-flavored soft drink called Vin Fiz.

Rodgers took off from Sheepshead Bay, N.Y., on Sept. 17, 1911. His flyer had the Vin Fiz logo emblazoned on its wings and tail.

The 25¢ face value paid for carrying a card or letter aboard one leg of Rodgers' flight. Flown cards were then deposited in the mailstream with regular postage stamps paying for delivery.

Only 13 of the stamps are known to have survived: eight on postcards, one on cover and four off cover.

The flight was halted repeatedly by crashes and mechanical failures. By the time Rodgers reached the Pacific Coast of California, 49 days had elapsed. He failed to win the $50,000 prize, but his place in aviation history as the first pilot to fly coast-to-coast across the United States was secured.

Great Britain's postal service stands out as one of the few long-established postal administrations never to have issued an airmail stamp.

Of course, this is only true if one excludes local and semiofficial airmail stamps.

Some of these stamps are also listed in the German-language Michel catalog.

The British postmaster general authorized the use of this stamp to prepay delivery via the Great Western Railway's airmail service between Cardiff, Wales, and Plymouth, England, starting May 15, 1933. The service was discontinued Sept. 30, 1933.

Canadian local and semi-official airmail stamps are listed in the Unitrade Specialized Catalogue of Canadian Stamps as well as in Sanabria.

Prior to the establishment of regular airmail service in Canada, a number of local aero clubs issued stamps for use on mail carried on inaugural or special flights.

The Aero Club of Canada issued the $1 red and blue Biplane local airmail stamp shown in Figure 4, Unitrade CLP3, for a flight from Toronto to New York on Aug. 25, 1919.

A number of aviation companies formed in Canada were authorized by the Ministry of Postal Services to transport personal and corporate mail during the 1920s.

These companies issued their own semiofficial airmail stamps to pay for delivering commercial mail to destinations that the Canadian postal service did not reach.

The companies worked under contract to and were closely supervised by the postal authorities.

Laurentide Air Service was the first company authorized to transport mail by the Ministry of Postal Services. LAS provided airmail service between Haileybury, Ontario, and Rouyn/Angliers, Quebec, from August to October 1924.

Conditions of the contract required that the mail had to be marked "airmail," so LAS issued an airmail stamp inscribed with the company's name and "SPECIAL AIR DELIVERY."

Semiofficial airmail stamps were placed on the back of the envelope to avoid confusion with the Canadian postage stamp, which was required for local delivery.

Altogether more than 50 Canadian semiofficial airmail stamps were issued, with several varieties existing for most of them.

These companies operated under government contract. The companies maintained their own post offices and issued their own stamps, which were the only legal franking for airmail service during this period.

Compania Colombiana de Navegacion Aerea was only in operation during 1920, but SCADTA continued to provide airmail service until 1932.

Additionally, SCADTA, under contract from the Colombian government, transported foreign airmail from a number of foreign countries to the mountainous interior of Colombia.

This mail was delivered to SCADTA agents or to Colombian consulates and was franked with SCADTA stamps overprinted with an abbreviation for the country of origin (for example "Ca." for Canada; "G.B." for Great Britain; "S" for Switzerland). These are usually referred to as consular overprints and are listed in the Sanabria catalog.

In 1932 the Colombian government began providing all airmail services, and Colombian airmail stamps replaced those of the SCADTA.

Poland was newly independent when the semiofficial airmail stamps shown in Figure 8 were issued in 1921.

The Polish Ministry of Post and Telegraph contracted with the Aero-Targ Co. for delivery of mail between Poznan and Warsaw and Poznan and Danzig during the Poznan Fair.

The 25-marka stamp shows Icarus, the mythological first aviation accident fatality, against a silhouette of Poznan.

The 100m shows a Junkers F3 aircraft scattering mail over Poznan, which harks back to the mail delivery methods of the Jupiter balloon and which hardly inspires confidence in safe delivery of the mail.

An advertising label is attached beneath each stamp inscribed with the initials "T.A.B.R.O.M.I.K.," which stands for a vodka factory, TAdeusz BROnislaw MIKolajczyk.