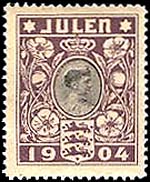 Figure 9. The world's first Christmas seal, issued in Denmark in 1904.

Figure 8. A seal from the 1936 International Philatelic Exhibition in New York City 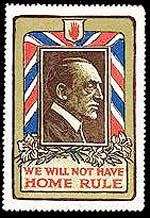 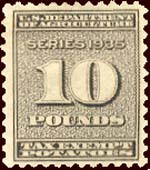 According to Linn's World Stamp Almanac, "A cinderella is a stamplike label that is not a postage stamp. Cinderellas include seals and bogus issues, as well as revenue stamps, local post issues and other similar items."

Some of the problems inherent in discussing cinderella stamps are apparent in this definition, which begins by saying that cinderellas are not postage stamps, but which goes on to include local post issues as cinderellas.

Some collectors define cinderellas as stamps that are not listed in the Scott Standard Postage Stamp Catalogue. However, as we shall see, a great many cinderella stamps are listed by Scott, particularly in the U.S. and Classic specialized editions.

Cinderellas take their name from the familiar fairy tale in which an abused stepdaughter and scullery maid becomes a princess through the intervention of her fairy godmother.

Cinderella stamps probably acquired the name because they are the stepchildren of philately. Or it could be that the name conveys the fond hope that today's cinderella stamp will become tomorrow's stamp royalty.

In a category as broad as cinderella stamps most collectors concentrate on one or two different types. Some collect cinderellas by nationality or topic as an adjunct to their postage stamp collections.

Attempting to analyze such a delightfully anarchic topic can be a daunting task. This general article will just scratch the surface of the subject.

Revenue stamps are avidly collected by a dedicated following who often consider postage stamps to be the true stepchild.

Revenue stamps, also called fiscals or tax stamps are, by definition, stamps that are used to indicate the payment of tax. Revenue stamps have been issued by all levels of government to pay taxes on just about anything you can think of.

Stamps that sometimes get lumped in with revenue stamps, are nonpostal service-fee stamps. These stamps do not show payment of tax — they pay for a service.

Telegraph stamps, such as the British 5/- rose-red Queen Victoria stamp shown in Figure 2, are a type of service fee stamp that paid for delivery of telegrams. They were issued in countries where telegraph lines were operated by the government, often in conjunction with the postal system.

Local postage stamps are stamps that were valid within a limited area or within a limited postal system. Local stamps require the addition of nationally or internationally valid stamps for further service. Locals may be either privately or officially produced.

A local 50-luma Fifth Anniversary of Independence stamp from the disputed province of Nagorno (Mountainous) Karabakh is shown in Figure 3. The province is nominally part of Azerbaijan, although it has been controlled by Armenia since 1991.

Karabakh stamps are used for mail delivery within the province and Armenia, but international delivery requires the addition of Armenian stamps.

Many local stamps, such as U.S. locals, Shanghai Local Post and China treaty port stamps are listed by Scott.

Not all local stamps are postage stamps. For example, in the United States, where telegraph lines were never owned by the government, telegraph stamps were private local issues.

Official seals are cinderellas that are issued by postal authorities. Because of their postal connection, many are listed in postage stamp catalogs.

Official seals do not pay postage. They are stamplike labels that are used to seal registered mail or to reseal mail opened in the dead letter office or mail that was damaged or opened in handling prior to delivery.

In some countries, patrons have had the option of consigning parcels and letters to the railway for partial routing or full delivery outside of the postal system. A Danish railway parcel stamp is shown in Figure 4.

When the railway system is controlled by the government, railway stamps often resemble postage stamps.

Another huge area of cinderella stamps is that of fantasy stamps issued for countries that either do not exist or that do not operate a postal system.

This area of cinderella collecting has exploded with the breakup of the Soviet Union, as reams of stamps have been issued in the name of geographic entities within the Russian Federation that have no postal authority.

For example, the Led Zeppelin stamp shown in Figure 5, which is definitely not your father's zeppelin stamp, purportedly comes from Tuva.

Tuva was an independent republic that issued postage stamps from 1926 until it was annexed by the Soviet Union in 1944. Today it is an autonomous republic within the Russian Federation. It does not have an independent postal system and is not authorized to issue stamps.

It is a good bet that this Led Zeppelin stamp was produced elsewhere and has never been anywhere near Tuva. Notice that, although it is denominated "5," no currency unit is indicated, and the word "postage" does not appear anywhere on the stamp.

While there is no question it has no postal validity, fans of Robert Plant, Jimmy Page, John Bonham and John Paul Jones, will eagerly add it to their cinderella collections.

Poster stamps are miniature posters in the size of a stamp. They usually are issued in panes with gum and perforations. Poster stamps perform all the functions of a normal poster: advertising, promotion and propaganda.

The poster stamp shown in Figure 6, with straightedge at top, advertised the Mid-Pacific Carnival to be held in Honolulu, Hawaii, Feb. 20-27, 1915.

The heyday of poster stamps was from the late 19th century through World War I, although they continue to be produced sporadically to this day.

The poster stamp shown in Figure 7 is of the political propaganda variety.

A bill granting home rule to Ireland was passed by the British Parliament and became law in May 1914.

Protestants concentrated in Ulster in the north of Ireland, however, feared that they would be swamped under home rule by the Roman Catholic majority in the south.

The Ulstermen staged a mutiny to prevent the implementation of home rule. World War I broke out in August 1914, putting home rule on the back burner until after the war, by which time the Easter Rebellion of 1916 made home rule a dead issue.

What stamp collector hasn't dreamed of being able to design his own stamps? Designing a philatelic exhibition seal may be the closest that some will ever come.

Many philatelic exhibition seals from the 1930s and '40s look very similar to postage stamps because they often were produced by the same engraving and printing companies, such as the American Bank Note Co., that produced postage stamps for many nations.

Such seals were often issued in sets of four and served as souvenirs of the exhibition. Sometimes they were affixed to a larger souvenir card.

The blue philatelic exhibition seal shown in Figure 8 is one of a set of four in different colors from the 1936 International Philatelic Exhibition in New York. The elaborate design, an allegory of mail delivery, shows Mercury, messenger of the gods, poised between a steamship and a train.

After the 1940s, philatelic seals with such elaborate designs and high production values became much less common because the cost of producing them became prohibitive.

Charity seals are another huge area of cinderella stamp collecting.

Christmas seals were the idea of a Danish postmaster named Einar Holboll. In 1904, he came up with the idea of making a charity label similar in size, shape and design to a postage stamp. The world's first Christmas seal, showing a profile of Denmark's Queen Louise, is shown in Figure 9.

The seals were sold to the public to affix to their Christmas cards, with the proceeds going to charity, in this case, impoverished children.

Holboll's idea caught on in Denmark and spread from there to much of the rest of the world where Chrismas is celebrated. Other frequently collected charity seals include Easter seals and anti-tuberculosis seals.

The Cinderella Stamp Club, founded in 1959, is affiliate No. 91 of the American Philatelic Society. Membership in the club is £22 annually from Roger Hudson, Box 172, Coventry CV6 6NF England, and includes a subscription to the quarterly journal, Cinderella Philatelist.