Cook's tour: stamps for the offices in China stamps 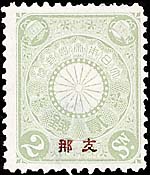 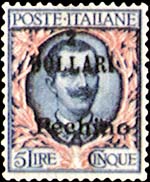 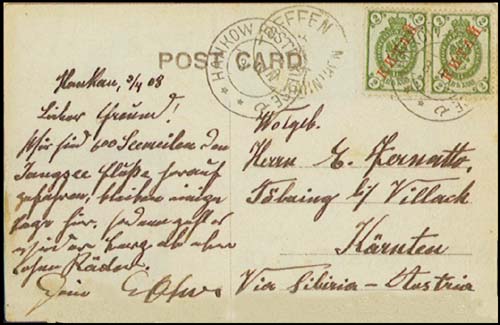 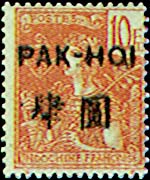 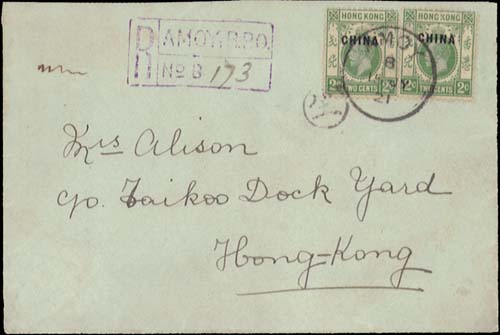 In the 19th and early 20th centuries, the ancient Empire of China was at the mercy of a number of foreign powers.

These countries violated Chinese sovereignty and exploited China for their own benefit through the process of extraterritoriality.

Extraterritoriality refers to one nation having rights within the boundaries of another nation. Historically, China, the Ottoman Empire, Siam (Thailand), Morocco, Egypt, Crete, Zanzibar and other countries conceded or were forced to concede extraterritorial rights to certain other nations.

In the Scott stamp catalogs, post offices operated in one country by another country are called "offices abroad."

Some countries claimed the need to operate a postal system within another country because of the lack of an adequate native postal system for delivery of mail.

In reality, from the late 19th to the early 20th centuries, having offices abroad was also one of the trappings of being a great power. A postal agency operating on foreign soil was a visible manifestation of sphere of influence and a mark of prestige, similar to possessing colonies.

A quirk of the Scott Standard Postage Stamp Catalogue is that listings of offices-abroad stamps of the United States, Poland and Yugoslavia are prefixed with the letter "K," while those of other countries are listed separately without prefix under their own headings immediately following the parent country.

Of these, the United States, Great Britain, France, Germany, Russia, Italy and Japan issued stamps for their offices abroad in China.

Treaty ports were cities on the seacoast or up navigable rivers that were open to foreign commerce and administered by a foreign-run Chinese maritime customs office and municipal council.

The foreign municipal councils of a number of the Chinese treaty ports also issued their own stamps for local mail delivery and delivery between treaty ports. These stamps were first listed in the Scott Classic Specialized Catalogue of Stamps and Covers in the 2003 edition. The Scott classic specialized catalog lists treaty port stamps for Shanghai, Amoy, Chefoo, Chinkiang, Chungking, Foochow, Hankow, Ichang, Kewkiang, Nanking, Wei Hai Wei and Wu Hu.

A 15-candarin blue Otter stamp, Scott 7, from Ichang is shown in Figure 1.

Settlements were designated areas separated from local Chinese cities that were administered by foreign consuls and a foreign municipal council.

Leased areas were leased directly from the Chinese government by the foreign power.

The United States achieved most-favored nation status in China through the treaty of Wangsia in 1844.

Although the Treaty of Wangsia did not specifically give the United States the right to operate a postal agency in China, any nation granted most-favored-nation status could claim any right that had been granted to any other foreign power in China.

The U.S. Postal Agency in Shanghai opened in 1867 under the auspices of the U.S. consul. It sold U.S. stamps at face value for U.S. currency or gold.

A horizontal strip of four $2-on-$1 violet-brown Benjamin Franklin Offices in China stamps, Scott K16, is shown in Figure 2.

The stamps were valid for prepayment of mail dispatched from the postal agency to U.S. addresses.

The stamps were not sold continuously throughout the period. They were available only when the Chinese dollar was worth at least U.S. 50¢ in the going exchange rate.

The U.S. Postal Agency was closed in December 1922 as the result of an international treaty that closed all foreign post offices in China. The United States formally relinquished its extraterritorial rights in China on Jan. 11, 1943.

Like the United States, most other countries with offices in China created stamps for the offices by overprinting their own stamps with the name of the country in which the office operated.

German unification was achieved in 1871 with the victory in the Franco-Prussian War. A latecomer to the Great Powers club, Germany was left scrambling for colonies and other trappings of great-power status.

The catalog listings of German Offices in China comprise about 50 different overprinted or overprinted-and-surcharged stamps.

Great Britain overprinted stamps of Hong Kong for use in its offices in China. Altogether Britain issued 27 different stamps for its offices there.

A French Offices in China 40-centime red-and-pale-blue Liberty and Peace stamp, Scott 40, is shown in Figure 5.

In addition to Offices in China stamps for general use, France also overprinted stamps of Indochina with the name of the treaty port, concession or settlement for Canton, Hoi Hao, Mongtseu, Pakhoi, Chungking and Yunnan Fou and for the leased area of Kwangchowan.

A 10-franc orange-brown-on-green-paper Allegory of France stamp overprinted for Pakhoi, Scott 33, is shown in Figure 6.

Unlike the United States and the European countries that maintained offices in China, Russia shared a long, ill-defined border with China and had designs on permanently annexing some Chinese territory.

This expansionist policy would eventually lead to blows with the emerging power of Japan. The Russo-Japanese War of 1904-05 was fought to control the Liaodong Peninsula of China.

Russia issued approximately 80 stamps for its offices in China by overprinting Russian stamps with "Kitai" (China) in Cyrillic letters or by surcharging them with values in Chinese dollars and cents.

The address-and-message side of a picture postcard mailed April 3, 1908, from the treaty port of Hankow to Carinthia, Austria, is shown in Figure 7.

Italy, like Germany, did not achieve unification until the late 19th century. To assert its place at the table with the Great Powers, Italy embarked upon an expensive program of colonial acquisition and opened offices in China.

Italian Offices in China stamps are overprinted "PECHINO" for Beijing or "TIENTSIN" for Tianjin and are surcharged in Chinese dollars or cents.

Japan emerged as a great power in the late 19th century. Like Russia, Japan had plans for territorial expansion into China, and it maintained a presence in the treaty ports settlements and concessions.

Offices in China stamps offer both a history lesson and a collecting challenge.