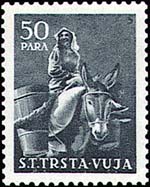 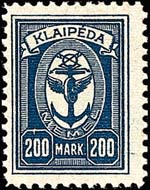 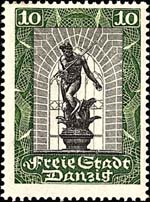 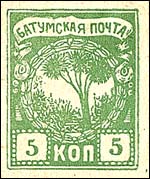 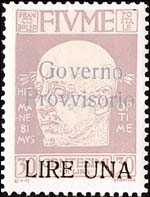 In the 19th and 20th centuries, the ebb and flow of nationalism and imperialism occasionally left islands of one nationality surrounded by seas of another. Sometimes these islands took the form of free or international cities with their own governments and postal systems.

Tangier in northern Morocco across the Strait of Gibraltar from Spain, was founded by the Phoenicians. A free city and capital of Mauretania under the Roman Empire, it was conquered by the Arabs in 705.

When the sultanate of Morocco was divided into French and Spanish zones in the early 20th century, Tangier was given special status.

The Convention of 1923 made Tangier an international city governed by a legislative assembly of 26 foreign representatives from Great Britain, France, Spain, Portugal, Italy, Belgium, Netherlands, Sweden and the United States.

Executive power was vested in the Committee of Control composed of the consuls of the signatory powers.

Mixed courts with French, Spanish, British and Belgian judges administered justice. Arabs and Jews had their own separate court systems.

This jumble of overlapping and contradictory authorities made for the type of wild and woolly environment where just about anything goes.

Foreign powers operated a number of postal systems in the city, and Spain, France and Britain issued stamps for Tangier.

A 75-centimo deep-blue Head of a Moor stamp, Spanish Morocco-Tangier Scott L21, is shown in Figure 1. Looking at this stamp, I can almost hear the jangle of Arab music and catch the acrid scent of burning hashish wafting from the Casbah.

Tangier became a part of the Kingdom of Morocco in 1956.

Italy was a jumble of separate kingdoms and duchies until late in the 19th century when Garibaldi joined forces with Count Cavour and the Sardinian House of Savoy to unite the country as the Kingdom of Italy.

The Papal States in central Italy, which were ruled directly by the pope, were among the predecessor states that lost their independence in the unification. The pope was not at all happy about it.

After King Victor Emmanuel II seized Rome in 1870, Pius IX refused to acknowledge the existence of the Kingdom of Italy. Because he could not travel through a place that he did not admit existed, Pius IX and his successors each became "the Prisoner of the Vatican," unable to leave the 0.17 square-mile papal enclave once they ascended the papal throne.

The impasse was resolved in 1929 by the Lateran Treaty negotiated by Benito Mussolini between King Victor Emmanuel III and Pope Pius XI.

Under this treaty, Vatican City was recognized as an independent state with the pope as its head. Vatican City has its own citizenship, diplomatic corps, flag, currency, and most importantly, a postal system and postage stamps.

Also in the Italian area is the Adriatic port of Fiume. Fiume, on the eastern side of the Istrian Peninsula, came under Habsburg rule in 1466.

Fiume was the main port of Hungary. Croats predominated in the city's population until the 19th century when the Hungarians began to encourage Italian immigration as a counter-balance to the rise of Slavic nationalism.

Italy signed a secret treaty with the Allies in 1915 in which Italy was promised the Habsburg lands on the Adriatic coast in return for coming into the war on the Allied side.

At the end of World War I, U.S. President Woodrow Wilson believed the city should be given to the new Kingdom of Serbs, Croats and Slovenes.

The Italians felt bitterly cheated out of what had been promised to them for their participation in the war.

Gabriel D'Annunzio was a WWI aviator, a fascist and Italy's best known poet. He organized a paramilitary force of demobilized soldiers and thugs, the Arditi, whom he dressed in black shirts. On Sept. 12, 1919, D'Annunzio led the Arditi into Fiume and seized control of the city.

D'Annunzio was proclaimed dictator. He remained dictator of Fiume until December 1920, when the Italian government sent a battleship into Fiume to bombard the municipal palace.

D'Annunzio surrendered and Fiume was proclaimed a "Free State" under a provisional government. A 1-lira Provisional Government overprint and surcharge on a 30-centesimo Gabriele D'Annunzio stamp, Fiume Scott 148, is shown in Figure 3.

Mussolini, taking much inspiration from D'Annunzio's seizure of Fiume, marched on Rome with his own fascist black shirts and seized control of the Italian government in March 1922. Fascists seized control of Fiume at the same time.

In 1924 Mussolini negotiated the Treaty of Rome by which the Kingdom of Serbs, Croats and Slovenes ceded Fiume to Italy. The city was formally annexed to Italy on March 16, 1924.

Fiume was occupied by the Germans in 1943 and was liberated by Yugoslav partisans in 1945. After the war, the Italian population was evacuated and the city was ceded to Yugoslavia. Today, it is the Croatian city of Rijeka.

Fiume issued fewer than 300 stamps. Some are relatively expensive, but most are not.

Batum (Batumi) is a seaport on the Black Sea and is the capital of Adzaristan, today an autonomous republic in the Republic of Georgia.

In 1918 the British took Batum from the Ottomans and declared it to be a free port. As the Allied intervention in Russia wound down, the city was taken by the Bolsheviks after the British withdrew in 1920.

A total of only 65 stamps were issued for Batum, most of them British overprints on Russian stamps, but some are quite pricey. A 5-kopek Palm Tree stamp, Batum Scott 1, is shown in Figure 4.

Centuries of German expansion to and colonization of the east were halted abruptly with the loss of WWI. The reemergence of Poland left large German minorities living in Polish territory. West Prussia, with a sizeable German population, became the Polish Corridor to the Baltic Sea, cutting East Prussia off from the rest of Germany.

Danzig on the Baltic Sea in West Prussia had an overwhelmingly German population of about 400,000 and was a special case.

The League of Nations compromise that created Danzig as a free city (1920-39) satisfied neither the Poles (who wanted the city for its port facilities) nor the German population (who wanted to remain a part of Germany).

Resentment over the status of Danzig helped bring Hitler to power. On Sept. 1, 1939, Germany invaded Poland, beginning WWII, and Danzig was restored to Germany.

In December 1943 the city was conquered by the Red army. The German population that had not fled or been killed was expelled to Germany and the city was given to Poland. Today it is the Polish city of Gdansk.

Danzig issued fewer than 500 stamps, including back-of-the-book stamps. The stamps of Danzig are colorful and attractive. There are a few expensive sets, but most are affordable. A 10-pfennig Neptune Fountain semipostal stamp, Danzig Scott B6, is shown in Figure 5.

A similar situation existed with the German port city of Memel on the Baltic Sea in Lithuanian territory.

Memel was founded in 1252 by the Teutonic Knights, but the surrounding territory was inhabited by Lithuanians.

Memel was detached from Germany by the Treaty of Versailles and was governed by an Allied and Associated Powers Commission. German and French stamps were overprinted for use in Memel.

In January 1923, Lithuania invaded Memel and expelled the French garrison without a fight. A Lithuanian occupation 200-mark Seal of the City stamp, Memel Scott N35, is shown in Figure 6.

In 1924 the League of Nations acknowledged the fait accompli, and Memel was incorporated into Lithuania as a semi-autonomous district.

In March 1939, Hitler sent German warships to Memel and delivered an ultimatum to Lithuania to surrender the city or face war. The Lithuanians surrendered the city. It was to be Hitler's last bloodless conquest before WWII.

After the war, the German population was expelled, and the city was returned to Lithuania. Today it is the Lithuanian city of Klaipeda.

The Adriatic port of Trieste, in the province of Venezia Giulia, was the chief port of Austria prior to World War I.

The population of the region was predominantly Italian. The Italian army conquered Venezia Giulia during WWI, and it became part of Italy after the war.

At the end of WWII in May 1945, Yugoslav troops captured the city. After the war, Trieste and the surrounding territory became the Free Territory of Trieste under United Nations protection during 1947-54. The territory was divided into Zone A, which included the city of Trieste and was under Allied control administered by the United States and Great Britain, and Zone B, the surrounding territory, controlled by Yugoslavia.

The Allied administration overprinted Italian stamps with "A.M.G. F.T.T.," which stands for "Allied Military Government, Free Territory of Trieste." These stamps are listed in the Scott catalog at the back of the Italian listings after the stamps issued for the Aegean Islands.

Yugoslavia issued stamps for Zone B inscribed "S.T.T. V.U.J.A.," which stands for "Military Administration Yugoslav Army, Free Territory of Trieste" in Serbo-Croatian. These stamps are listed by Scott at the back of the listings for Yugoslavia.

A 50-para Peasant on Ass stamp, Yugoslavia-Trieste Scott 23, is shown in Figure 7.

In 1954 Zone A reverted to Italy, while Zone B became a part of the Yugoslavian republic of Slovenia.

With the proliferation of new stamp issues, many collectors are looking for interesting areas with a limited scope to collect. The stamps of free and international cities can fill that need.