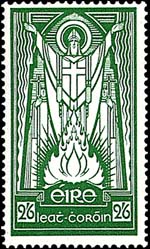 Figure 5. The ultimate green stamp for St. Patrick's Day was issued by Ireland and shows St. Patrick himself. 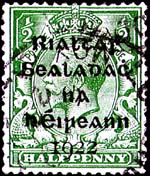 Figure 4. The first Irish stamp, Scott 1, was made by overprinting a ½-penny green stamp of Great Britain. 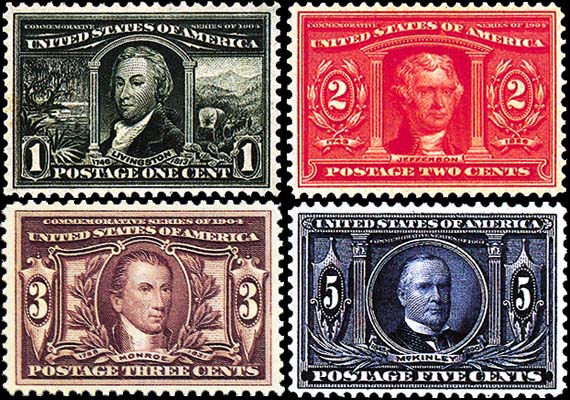 Figure 3. These U.S. Louisiana Purchase Exposition stamps, Scott 323-26, are printed in the UPU color scheme. Click on image to enlarge. 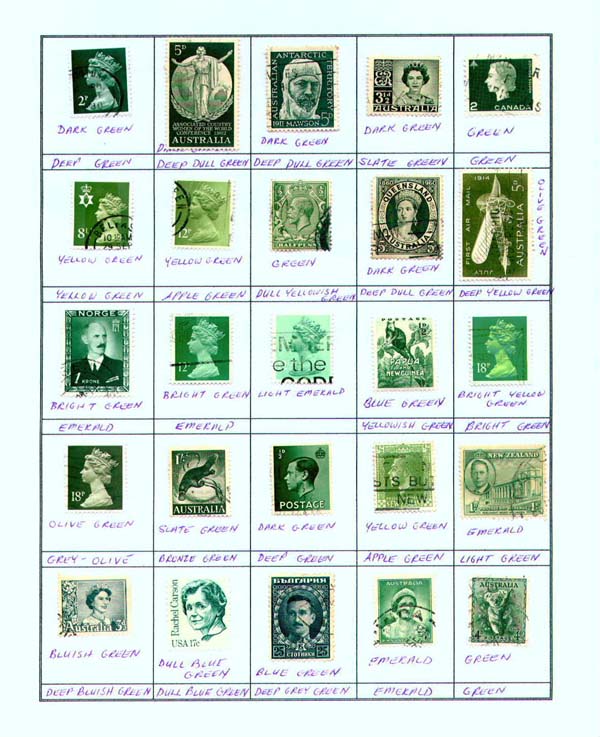 Figure 2. A showing of green stamps, from the author's general color reference collection, a page made by the author. Click on image to enlarge.

Figure 1. Cover of booklet for S & H Green Stamps. The stamps are collectible, but not postal. Click on image to enlarge.
Previous
Next

It's St. Patrick's Day – time for the wearin' o' the green. So what if you aren't Irish? Neither am I, but you can get into the spirit of the holiday by spending some time appreciating your green stamps.

By "green stamps" I don't mean the type that were printed and distributed by Sperry & Hutchinson.

S&H was one of the very first customer loyalty plans ever devised. Begun in 1896, S&H Green Stamps were distributed for purchases made for groceries and other consumer goods.

When I was a child, it was my job to stick the S&H Green Stamps my mother got at the grocery store into savings books, such as the one shown in Figure 1.

It was an exciting day when we collected enough books to go to the redemption center and select something frivolous in exchange for our books of the S&H Green Stamps.

It is said that in 1964 Sperry & Hutchinson printed three times as many stamps as the U.S. Post Office Department.

Shortly thereafter, discount stores undercut the market and S&H stamps fell out of favor, but Sperry & Hutchinson is still in the loyalty marketing business with an online version called S&H Greenpoints.

Although sometimes found in postage stamp mixtures, S&H Green Stamps are primarily of interest to cinderella and paper ephemera collectors. I still get nostalgic when I seem them at flea markets.

The green stamps of greatest interest are those that already reside in your stamp album.

Have you ever spent any time admiring them just for their hues? Green is as good a color to study as any other, and it is seasonal.

So grab a good general color key, your favorite stamp catalog, and your albums and stockbooks, and look for green stamps that will add zest to your collection.

A general color key is a tool used to match color names with specific hues. It looks a lot like the paint chips you might find in the paint department of your local hardware store. A stamp color key is usually bound together or organized on cards. Usually there is a hole in the middle of each patch of color so it can be placed over a stamp to be compared.

It is worth becoming adept at color identification. In some cases, color makes a huge difference in value. The difference between a blue-green stamp and an apple-green stamp might be $10, $100, or much more depending upon the quantity issued, demand and the circumstances surrounding its printing.

Many years ago I began a general reference collection of color as printed on stamps. I use the Stanley Gibbons Color Key and do my best to match the hue of each stamp by placing it beneath the hole in the color chip. I always use natural sunlight or a full-spectrum lamp that replicates daylight. This gives a basic but consistent reading of the colors. Artificial light changes the shades the eye sees depending on the type of light used.

The most ink-saturated part of a stamp is usually the part of the design to try to match with the hues of the color key. It might take several attempts of moving the stamp from one hue to another.

Once I find a match or a near-match to the stamp, I make note of it and cross-reference it with the color listed in the Scott Standard Postage Stamp Catalogue as well as those in the specialized catalogs that I use the most.

I mount the stamps into color families on homemade album pages.

Figure 2 shows one of my pages of green family stamps.

If you do this, you will find that in time you will have created a basic general reference for stamp colors, and you will teach yourself something about color and stamps.

It will also increase your skill at using a color key and a postage stamp catalog. The best way to learn about color is to get in there and try.

Some collectors actually collect stamps just for their hues. A collector might like green, so green stamps are sought.

Collecting stamps by color makes more sense than might at first be apparent because a given stamp's color actually relates to how stamps once were used.

Beginning in 1898, the Universal Postal Union implemented a program designed to expedite postage accounting by all UPU-member countries.

Under this scheme, green was the color designated for stamps used to pay for international printed matter. Red was used for postcards, and blue was used for letter-rate stamps.

In the United States, domestic letter rate stamps were printed in violet.

The UPU stamp color scheme is demonstrated by the four U.S. stamps from the Louisiana Purchase Exposition set of 1904, Scott 323-26, shown in Figure 3.

This color-coding of basic stamps, with a few exceptions, remained in effect in the United States from inception until after World War II. It accounts for the seemingly endless parade of 1¢ greens, 2¢ reds, 3¢ violets and 5¢ blues.

In the late 1950s, modern presses made stamp printing more colorful, but fortunately for those who like grass, leaves and St. Patrick's Day, we still occasionally get green ones.

What could be more appropriate for St. Patrick's Day than green stamps from Ireland? Green is almost a sacred color to the Irish. It relates to St. Patrick and to the idea of nationhood.

Ireland is also called the Emerald Isle with good reason. The high level of rainfall and realtively mild winters and cool summers give the island's landscape a cool, green mantle for most of the year.

Ireland's first stamps were British King George V stamps that were overprinted in Gaelic. The translation of the overprint is "Provisional Government of Ireland 1922."

There were eight stamps in the first series, and the first stamp in the set, the ½d, shown in Figure 4, was green.

As appropriate as that might have been for the country of issue, the color was green in compliance with the UPU guidelines mentioned in previous paragraphs. In fact, the first three values of the set were: ½d green, 1d red and 2½d ultramarine.

Likewise, the first Irish telegraph form issued in 1923, Michel Ireland TB1, is identical to the 1/– olive brown King George V form in use in Great Britain, with the exception that the stamp design on the Irish form is printed in green ink.

St. Patrick was born circa 389 in Britain. At the age of 16 he was captured and taken to Ireland as a slave. After six years of slavery he escaped to Britain. He returned to Ireland as a Christian missionary.

He died circa 461 and is the patron saint of Ireland.

This bright green stamp looks like a cross between Celtic design and Art Deco. It features St. Patrick himself in his finest vestments standing behind the Paschal fire he lit in defiance of the Druids.

The Druids were priests of the pagan religion of pre-Christian Ireland. According to legend, fire was sacred to the Druids and their religion, which forbade anyone other than a Druid from lighting a fire during the pagan Beltaine festival.

St. Patrick was arrested and placed on trial where he used his eloquence to talk his way out of trouble.

One legend is that he plucked a cloverleaf from the ground and used it to explain the Holy Trinity to his accusers, and that is why Ireland is often represented by a shamrock.