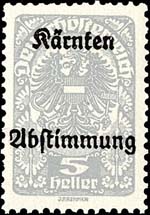 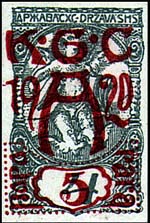 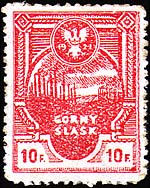 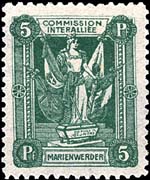 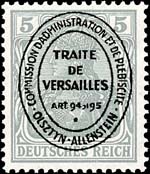 Figure 1. A 5-pfennig green German stamp overprinted by the Inter-Allied Control Commission for the Allenstein plebiscite, Scott 15.
Previous
Next

Do you like collecting dead countries? Are you tired of the endless proliferation of new issues? Are you interested in history and geography? Are you looking for a collecting area with a limited scope that won't totally deflate your wallet?

If so, then plebiscite stamps are for you, along with postal stationery and cinderella stamps.

A plebiscite is defined as "a vote by which the people of an entire country or district express an opinion for or against a proposal, especially on a choice of government or ruler."

It goes on to explain "After World War I, a number of disputed areas were placed under temporary League of Nations administration, pending plebiscites to determine which nation the populace wished to join. Special issues note the upcoming vote in several of these areas."

Prior to WWI, multi-national and multi-ethnic empires comprised much of Europe. These included the Russian, German, Austro-Hungarian and Ottoman empires. At the end of the war, these empires were mostly liquidated along national lines.

During WWI, United States President Woodrow Wilson called for "peace without victory" at the conclusion of the war. He elaborated this idea in his "Fourteen Points" speech to Congress in 1918.

Points V through XIII dealt with the issue of "national self-determination." By this, Wilson meant that the people of each nation should be able to determine how and by whom they would be governed.

At the Paris Peace Conference, Wilson's idea of national self-determination was honored as much in the breech as in the observance. Generally speaking, it was much easier to apply the principle to the territories of countries that were on the losing side than to the winners.

In some areas of the fallen empires where the population was homogeneous or where only small minorities of other populations existed, drawing new national boundaries was fairly easy.

Many areas of the old empires had mixed populations of relatively equally proportions. Following the establishment of the League of Nations, it was decided to hold plebiscites in some of these areas with mixed populations, to allow the people who lived there to determine which country the territory would belong to.

Four of the six territories discussed here were placed under control of the Inter-Allied Control Commission pending the outcome of the plebiscite sponsored by the League of Nations, and postage stamps were issued for them.

In the Scott stamp catalogs, these stamps are listed without a prefix under the names of the plebiscite areas.

Taken alphabetically, the first plebiscite territory is Allenstein (called Olsztyn in Polish). A 5-pfennig green German stamp overprinted by the Inter-Allied Control Commission for Allenstein, Scott 15, is shown in Figure 1.

Allenstein was a district in East Prussia with a mixed German and Slavic population of more than 500,000.

The French and the British were looking for ways to strengthen the new Polish republic as a bulwark against the Soviet threat. The British and French tried to attach Allenstein to Poland, but the Germans objected strongly, so a plebiscite was called.

Although Allenstein had a sizable Slavic minority, these people were not Poles. They were Masurians who shared the Lutheran faith with the German-speaking Prussians. In the plebiscite, the Masurians voted with the Germans for a lopsided return of 97.9 percent in favor of union with Germany.

Allenstein was returned to Germany on Aug. 20, 1920. After World War II, its German population was expelled and replaced with Poles taken from lands in eastern Poland annexed by the Soviet Union. Today, Allenstein is the Polish city of Olsztyn.

Next on the list of plebiscites is Eastern Silesia. Formerly a part of Austria, the territory had a mixed German, Polish and Czech population of more than 680,000.

Both Czechs and Poles lived in parts of Eastern Silesia, and they were unable to reach agreement on where the border should be drawn.

The Allies were asked to arbitrate, but they were unable to arrive at a solution acceptable to all parties, so on Sept. 27, 1919, a plebiscite was called.

The plebiscite was to be held under the auspices of the Allied Powers rather than the League of Nations and its IACC.

The Soviet invasion of Poland in 1919-20 made the Poles more amenable to an arbitrated solution.

The plebiscite was canceled, and the border was set by the Allied Conference of Ambassadors and accepted by both parties in July 1920.

In 1938, at Nazi Germany's suggestion, Poland seized the disputed territory while Czechoslovakia was being dismembered after the Munich Conference.

Germany annexed the territory during WWII, but the previous borders were reestablished after the war.

Marienwerder was a district of West Prussia centered on the town of the same name, just east of the Vistula River.

Had the policy of national self-determination been strictly followed, the new state of Poland would have been landlocked. Because a seaport and access to the Baltic Sea were considered economic necessities for the new state, the Allies awarded most of West Prussia and its sizeable German population to Poland. This strip of land, called the Polish Corridor, cut East Prussia off from the rest of Germany.

Marienwerder in West Prussia had an overwhelmingly German population, and the Germans were able to secure a plebiscite for the area.

A 5pf green Symbolical of Allied Supervision of the Plebiscite stamp, Marienwerder Scott 1, is shown in Figure 3.

The people voted overwhelming for Germany, and in July 1920 Marienwerder was returned to Germany.

After WWII, the German population was expelled and replaced by Poles from eastern Poland, and the city was renamed Kwidzyn.

Schleswig was a grand duchy with a mixed German and Danish population Prussia had acquired Schleswig as a result of wars with Denmark in 1864 and Austria in 1866.

After WWI, the Treaty of Versailles called for a plebiscite to decide the fate of the territory. A 1-mark View of Schleswig stamp, Schleswig Scott 11, is shown in Figure 4.

The Official stamps of Schleswig are the only really expensive plebiscite-area stamps, so if you are on a tight budget, you might want to forego acquiring them at first.

For the plebiscite, Schleswig was divided into Zone 1 in the north and Zone 2 in the south. Zone 1 voted for union with Denmark, while Zone 2 voted to remain part of Germany, where it is still part of the German state of Schleswig-Holstein today.

After the plebiscite, Schleswig stamps were issued in Danish currency and overprinted "1. ZONE" for use in the part of the territory that voted for union with Denmark.

Upper Silesia (Gorny Slask in Polish), with a mixed Polish and German population, was part of Germany before WWI. After the war, fighting broke out between its Polish and German inhabitants, so Italy, France, Great Britain and the United States sent troops to occupy and pacify the area.

In view of the hostilities, the design of the 50pf gray Dove With Olive Branch Flying Over Silesia plebiscite stamp, shown in Figure 5, is a bit ironic.

The plebiscite, held March 20, 1921, was indecisive. The vote was nearly equally divided between Poland and Germany, so the Inter-Allied Control Commission divided the territory between the two countries based on the results of the plebiscite.

The German propaganda labels, one of which is shown in Figure 7, took the form of counterfeit Polish stamps overprinted in German "German value equals 70 pfennigs. Vote German!"

The Polish puppet-state of Central Lithuania also issued a set of six semipostal stamps to support Polish efforts in the Silesian plebiscite.

Upper Silesia has been part of Poland since the end of WWII.

Although the IACC held a plebiscite for Carinthia in 1920, no stamps were issued for the territory. Carinthia was a province of Austria with a mixed German and Slovene population. The IACC divided the province into Zone A in the south with a predominantly Slovene population and Zone B in the north with a German majority centered on the city of Klagenfurt.

A plebiscite was to be held first in Zone A. If that election went against Austria, then a second plebiscite would be held in Zone B. The plebiscite was held in Zone A on Oct. 10, 1920, with 59 percent of the vote going to Austria. Many ethnic Slovenes voted for union with Austria for economic and cultural reasons.

Although no stamps were issued for this plebiscite territory, both Austria and Slovenia issued semipostal stamps to raise money for propaganda prior to the vote.

Today Austrian Carinthia, which still possesses a large minority Slovene population, is a federal state of the Austrian Republic.