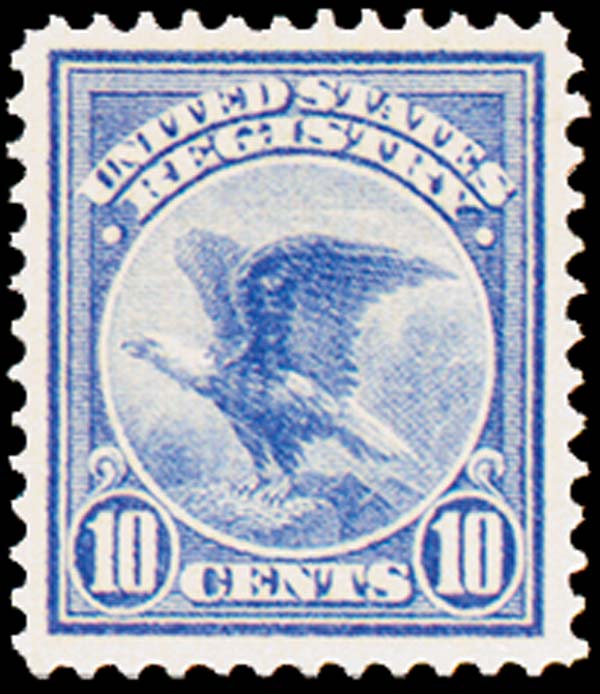 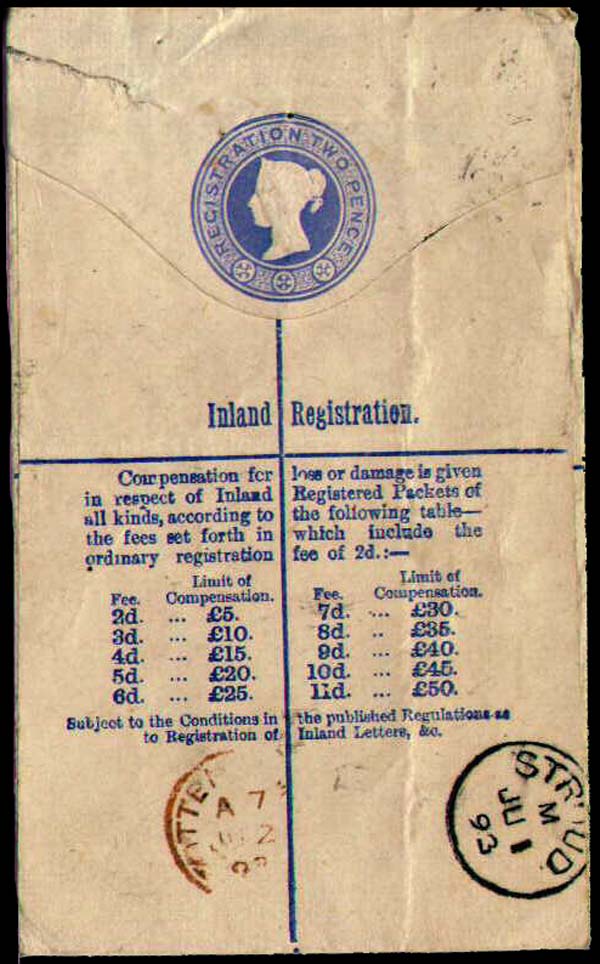 Figure 6. The backflap of the envelope shown in Figure 5 bears a 2-penny imprinted stamp for the registration fee. Click on image to enlarge. 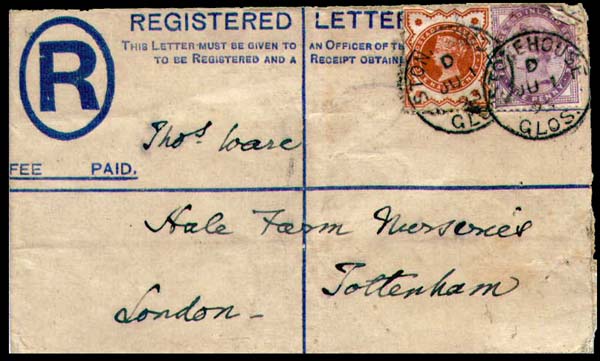 Figure 5. A British registered letter envelope mailed in 1893. The stamps on the front paid only the postage, not the fee. Click on image to enlarge. 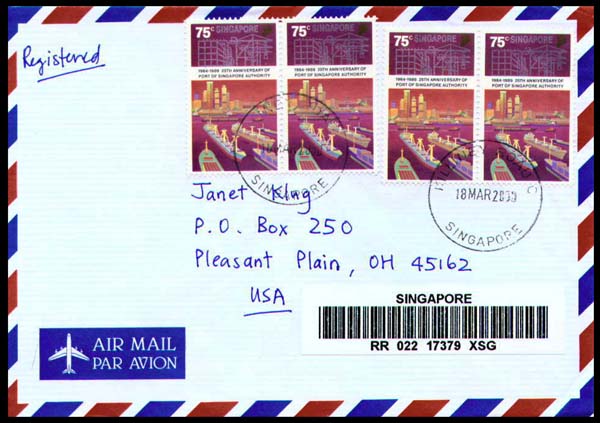 Figure 4. A bar-coded registration label, bottom right, used on a cover mailed from Singapore to Ohio in 2000. The bars on the label are scanned and read by computer. Click on image to enlarge. 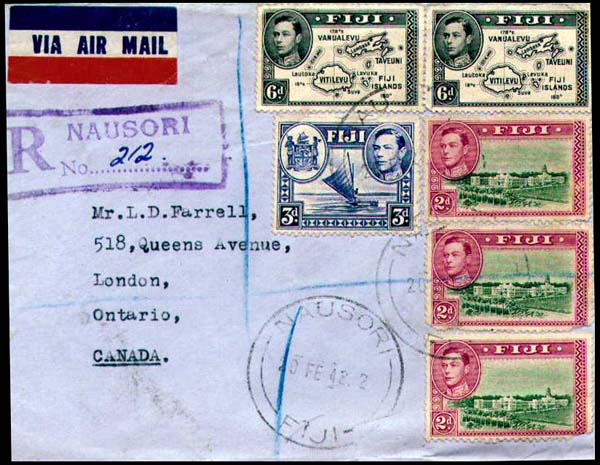 Figure 3. A registration handstamp with a handwritten number was used instead of a label on this registered cover mailed from Nausori, Fiji, to Canada in 1948. Click on image to enlarge. 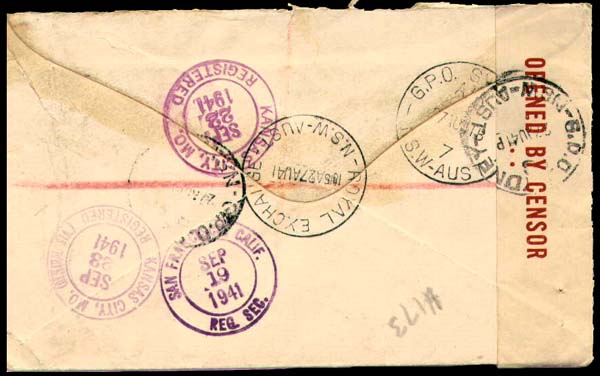 Figure 2. Backstamps on the registered cover shown in Figure 1 document the route the letter traveled. Click on image to enlarge. 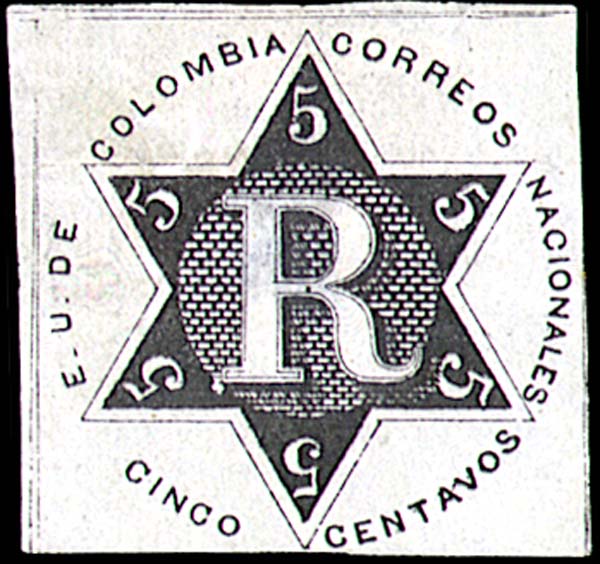 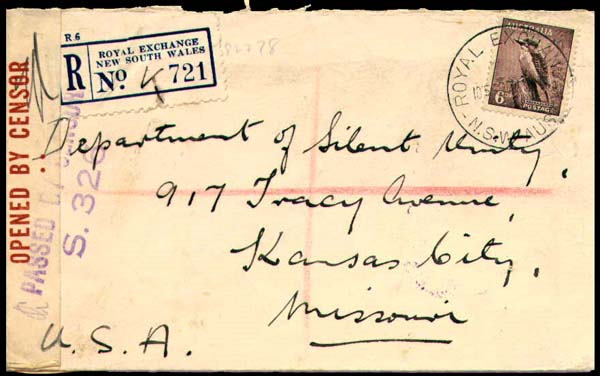 Figure 1. A registered letter sent from Australia to the United States in 1941. The numbered registration label at the upper left and the crayoned crossed lines in the center of the cover denote that this is a registered mailpiece. Click on image to enlar
Previous
Next

Many classifications of mail besides ordinary first-class and bulk-rate mail are familiar to us today.

One such added-fee service is registered mail. This is an extremely interesting specialty for stamp collectors to pursue.

In late 18th-century Britain, money letters were the most secure way to send coins or currency.

Eventually that method developed into the more familiar registration system. Registered mail was developed to assure safe delivery of valuable documents, securities, merchandise and cash that was sent through the mail.

Each letter or package that is sent by registered mail receives a unique number. At each point along the route of delivery, the registered mailpiece is recorded and usually receives a transit marking in the form of a backstamp.

It is this feature that makes collecting registered letters so interesting. By following the dates of the backstamps, it is quite easy to reconstruct the route the letter traveled.

Registration labels are etiquettes that mark a mailpiece as being registered mail. They have no franking power in and of themselves.

In 1882 the Universal Postal Union standardized the design of registration labels.

The prominent "R" and number remained largely unchanged until a few years ago, when many countries, including the United States, began using electronic bar coding.

Figure 1 illustrates a registered cover sent from Australia to Kansas City, Mo., in 1941. Besides being opened and resealed at left by a censor because it was mailed during World War II, the cover also bears a familiar blue and white registration label.

Notice, too, that the cover bears red perpendicular crayon lines.

Many countries marked registered mail with crossed blue or red lines. This practice is a holdover from earlier times when money letters and registered mail were bound with string or ribbon held in place with sealing wax to hinder pilferage.

The back of the cover, shown in Figure 2, bears a number of transit and receiving marks that document the route the cover traveled.

The cover was posted at the Royal Exchange in New South Wales Aug. 27, 1941. It then transited through the Sydney general post office on the same date. The letter transited San Francisco Sept. 19 and finally arrived in Kansas City Sept. 22.

Not all countries used gummed labels for registration. Figure 3 shows a registered airmail cover sent from Nausori, Fiji, to Canada in 1948. The registration marking is a rubber handstamp with the registration number written by hand.

Figure 4 shows an example of a bar-coded self-adhesive registration label from Singapore. The bar codes are read by a hand scanner and can be tracked by computer. This method is both more efficient and more accurate.

Many countries issued postal stationery designed especially for registered mail. These envelopes often come in various sizes and are reinforced with linen or heavier stock paper.

Figure 5 illustrates a registered-letter envelope sent from Great Britain. It was mailed from Stonehouse to London in 1893. The reverse of the envelope, shown in Figure 6, bears not only the

Some countries issued stamps for registration fees. These stamps are listed in the Scott catalogs with catalog numbers prefixed with the letter "F."

Liberia first issued registration stamps in 1893. Those first stamps, such as the nondenominated (10¢) black stamp, Scott F2, shown in Figure 9, looked very much like the familiar numbered registration labels with a large "R" and a place for a handwritten tracking number, but the stamps were sold for 10¢ to pay the registration fees.

In 1919 Liberia began issuing triangular registration stamps. The stamps issued in 1921 illustrate a Gabon viper ready to strike. Presumably this served as a warning to anyone attempting to make off with the mail. A 10¢ Gabon Viper registered mail stamp, Liberia Scott F21, is shown in Figure 10.

Colombia's first registration stamp is a simple imperforate 5-centavo black stamp with a six-pointed star, Scott F1. This stamp, shown in Figure 11, indicated that the registration fee had been paid.

In 1914 registration labels used in German New Guinea were pressed into service as postage stamps for the island of New Britain after the Germans there surrendered to Australian troops.

The New Britain stamps, such as the 3d stamp, Scott 43, shown in Figure 12, are overprinted "G.R.I." (Georgius Rex Imperator — the British monarch's monogram) and are surcharged in British currency.

Collecting registered mail can be a fascinating area of specialization or simply an enjoyable byway.

Either way, if you add a cover or two to your collection, you be having more fun.