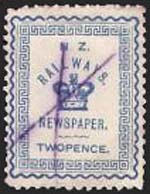 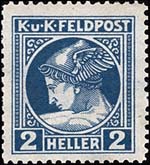 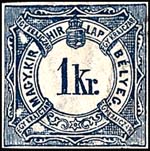 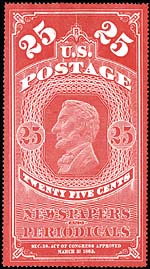 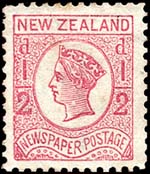 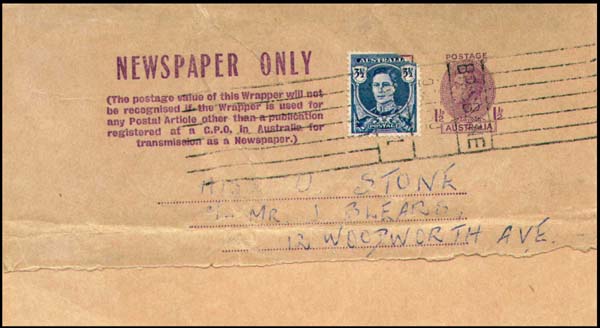 One of my daily rituals is padding down the driveway to collect the morning newspaper.

In today's world, an independent carrier usually makes daily newspaper deliveries. Newspapers such as Linn's Stamp News arrive in the mail without a postal inscription of any kind, thanks to a special periodicals rate offered by the United States Postal Service.

This was not always the way that newspapers were handled by the world's postal authorities.

Realizing that dissemination of news and opinion was beneficial to the commerce and development of a nation, many countries instituted preferential postal rates for newspaper delivery.

With the reduced rates came special stamps to pre-pay the rates.

Austria's first newspaper stamps were nondenominated, and the color of the stamp indicated its postal value. A short-lived rate change in 1856 changed the color for the 6kr stamp to scarlet, making the rare 6kr scarlet newspaper stamp, P4, valued by Scott at $67,500 unused, hinged and $40,000 used. It is the gem of a newspaper stamp collection.

Austria issued many colorful newspaper stamps through the 1920s, most of which bear a portrait of the winged messenger of the gods, Mercury (or Hermes as he is known in Greek).

This series and a later series begun in 1920 are outstanding examples of Art Nouveau illustration popular at the time. The designs were considered very modern when they were issued.

In 1873, New Zealand issued a modest ½-penny rose Queen Victoria newspaper stamp, Scott P1, shown in Figure 3. This stamp is notable not so much because of its design but because of the many collectible varieties that await a collector looking for a challenge.

The 1873 printing was made on NZ-and-star-watermarked paper, but a high percentage of the stamps do not bear any part of the watermark. The smaller stamp size did not match the watermark pattern.

These stamps can be found in perforation gauge 10, gauge 12½, gauge 12½ by 10, and gauge 10 x 12½. All of the 1873 issues were made on horizontal mesh paper, which means the stamps will curl slightly along the horizontal when held by tongs and exposed to a gentle breath. This tip should help you to correctly identify these stamps.

On New Zealand's second newspaper stamp issue, issued in 1875, the watermark was changed to a small star.

New Zealand's final newspaper stamp issue was in 1892. It is on paper watermarked with the NZ-and-small-star-set-wide-apart design and is perforated gauge 12½.

There are many other varieties of the New Zealand newspaper stamps, including double perforations, reversed watermarks and odd compound perforations. This stamp would make an interesting single-issue specialty collection.

Many other countries issued interesting and highly collectible stamps expressly for the carriage of newspapers, and fortunately a great many fall within easy reach of very modest stamp budgets.

Fiume, the Italian city on the Adriatic Sea ruled by fascist dictator and poet Gabriele d'Annunzio, issued very unusual newspaper stamps in 1919 and 1920. They are triangular and are oriented with the apex pointing down.

In 1928 Belgium pressed parcel post and railway stamps into use for newspapers by overprinting them "JOURNAUX DAGBLADEN 1928." This is a bilingual inscription of the French and Flemish words for "newspaper." A 1-franc blue newspaper stamp, Belgium Scott P8, is shown in Figure 5.

These big, beautifully printed stamps were used on receipts to prove postage had been paid on bulk shipments. Once you see any of the U.S. newspaper stamps issued between 1865 and 1897, it is almost a certainty you will have an overwhelming desire to begin collecting them.

Newspaper tax stamps are listed with the prefix "PR" in the Scott catalogs.

Newspaper stamps issued for occupied territories are also listed in the Scott catalogs, prefixed with the letters "NP."

Railway newspaper stamps have been issued in several countries, but generally they are not Scott-listed, yet they are highly collectible.

In many countries, the railroad was a government agency, just as the postal and telegraph services were. Railway and railway newspaper stamps were issued by these government agencies.

The wrapper was secured with its own gummed flap or with a label or a seal. Wrappers are collected as entires, that is, the complete wrapper should remain intact.

Worldwide postal stationery is listed in the looseleaf Higgins and Gage World Postal Stationery Catalog, although most sections of the catalog have not been updated in many years.

In at least one instance a newspaper publisher was so eager to find a reliable distribution method for its publication that the proprietors established a postal delivery service.

The Fiji Times Express was begun in 1870 to distribute newspapers, letters, and parcels throughout the Fiji islands. A crude typeset stamp created by the Fiji Timesin Levuka, Fiji Scott 6, is shown in Figure 11.

A newspaper collection can be surprisingly broad.

It can be made even more challenging if you attempt to find the stamps properly used on a newspaper or a receipt of mailing. The stamps and covers await discovery. You just need to be a philatelic news hound and sniff them out.