Figure 6. The "Cowlick" variety of the 8¢ Queen Elizabeth II stamp, Canada 593. Click on image to enlarge. 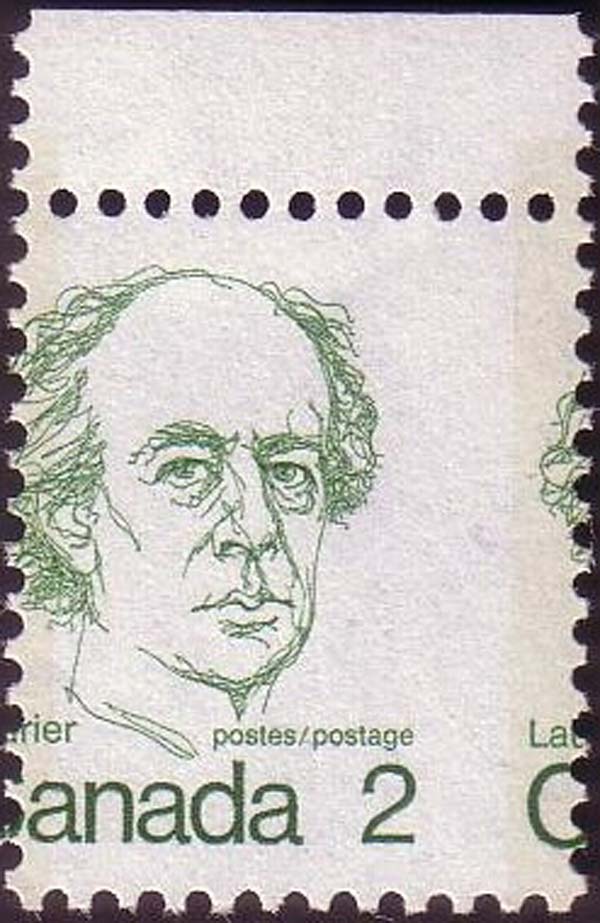 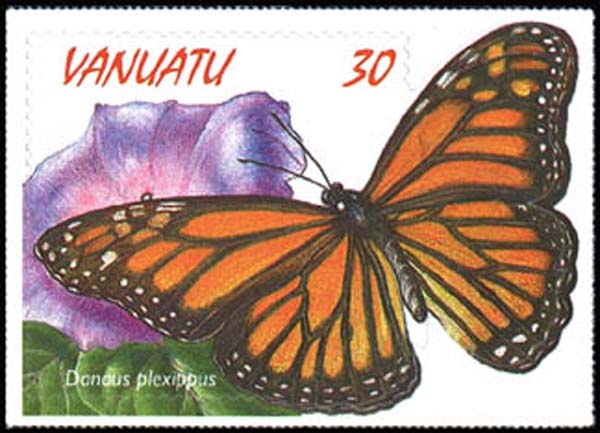 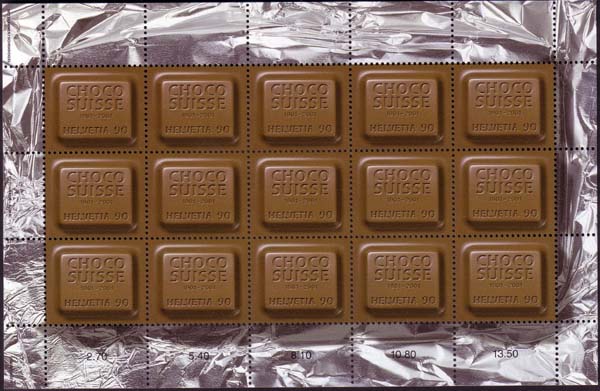 Figure 3. A pane of 90-centime Chocosuisse Centennial stamps, Switzerland 1100. The 15 stamps include a scratch-and-sniff chocolate scent feature. Click on image to enlarge. 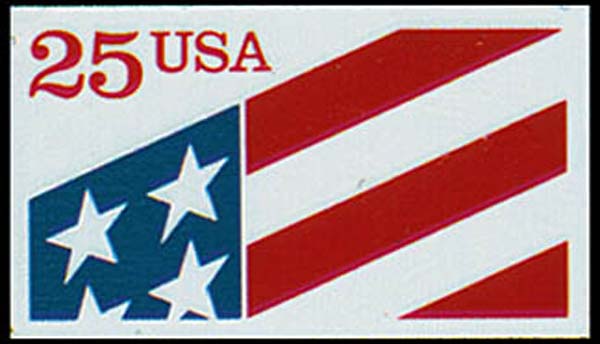 Figure 2. This 25¢ Flag stamp (2475) was printed on plastic instead of paper. Click on image to enlarge. 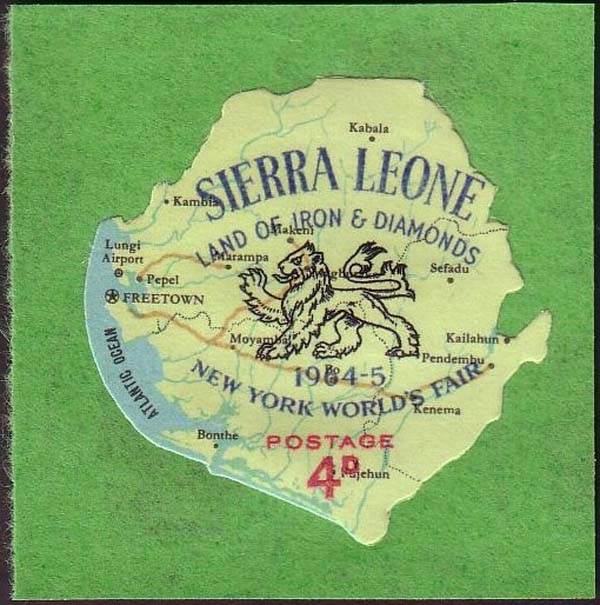 Figure 1. One of the world's first self-adhesive stamps, a 4-penny Map and Lion of Sierra Leone stamp, Scott 259. Click on image to enlarge.
Previous
Next

Modern stamps and covers get a bad rap from some collectors who say that recent stamps are uninteresting, philatelically contrived or not challenging to collect.

It is true that collecting modern stamps is not everyone's cup of tea, but it is false to denigrate the stamps and those who collect them in the name of a myth that fails to pass muster in the light of day.

For this column, I define "modern" as post-World War II to the present.

Some purists would argue for an earlier or later date, but this marker works for most purposes. Let's take a closer look at some of the myths.

Recent stamps are uninteresting. To my mind, this is utter nonsense. Many modern stamps have all the characteristics and as much charm as their century-old ancestors.

In the early 20th century, innovations such as coil stamps and stamp booklets were created to make stamps more convenient for postal customers to use.

Today's equivalent to the early stamp innovations would be the self-adhesive stamp. It is very convenient for mail users, and it is easy to collect most self-sticks as used singles. But many collectors are baffled over how the mint stamps should be collected.

The new technology made perfect sense for the hot and humid tropical climates where stamps with traditional water-activated gum can quickly adhere to one another and become unusable for either postage or collecting.

Once used, the stamp was forever stuck to its envelope paper, no matter how long a collector might soak it. Some tried using lighter fluid to dissolve the adhesive. It didn't work.

The only solutions were to collect Tongan and Sierra Leonean stamps on cover or to clip the stamp from the envelope and mount the piece.

Note that the stamp shown in Figure 1 is on piece.

The United States explored self-adhesive stamp production with a 10¢ precanceled Dove Weather Vane Christmas stamp in 1974 (1552). The stamps had crossing die-cuts in the middle so they would self-destruct if anyone tried to remove and reuse them.

That would have been an unlikely scenario. The die cuts were unnecessary. The gum on these stamps was so tenacious that, once stuck, a stamp wasn't going to come off the paper. The Scott Standard Postage Stamp Catalogue notes that the stamp will separate into layers when soaked.

Time has shown that as the gum used on these stamps aged, it leeched, yellowed and left stains on the stamps. Thirty years later, there are probably no 1974 10¢ Dove Weather Vane stamps left with full original gum in pristine condition. Covers with the stamps show that the gum has migrated and left dirty stains.

In 1992, the Postal Service addressed collector complaints about soaking self-stick stamps for collecting purposes. Stamps were printed with a water-soluble layer that released when soaked.

The layer of self-adhesive gum stuck to the paper as the stamp floated free.

That is the theory, anyway. In practice, soaking results with U.S. self-stick stamps are not uniform. With patience, most U.S. self-adhesives will release in a warm water bath, if left to soak long enough.

Gum technology is only one of the more interesting aspects of modern stamp production. Add to that security measures such as microprinting and holography, or mail handling technologies such as luminescence and bar coding, and you have a treasure-trove of very interesting subjects that are available only on modern stamps.

Modern stamps are philatelically contrived. Sure, some are. So what? Some of the classics were contrived for collectors.

In 1893, the United States issued a set of 16 stamps to promote the Columbian Exposition. The values were 1¢ to $5, and the total face value for the entire set was $16.41, an extraordinary sum of money in those days.

Collectors of the day complained bitterly that the U.S. Post Office Department was engaging in a form of extortion.

In 1930, the United States issued three airmail stamps depicting the Graf Zeppelinairship. The total face value of the three stamps was $4.55, also a high price during the Great Depression. There were again complaints about the stamps being frivolous and philatelically contrived.

Yet today, both the Columbians and the Zeps are key items in any U.S. collection.

Modern stamps have pictured Mickey Mouse, scratch-and-sniff chocolate bars and butterflies so lifelike they almost look as though they could take flight.

A pane of 90-centime Chocosuisse Centennial stamps, Switzerland 1100, is shown in Figure 3.

Collectors of classic stamps may very well turn up their noses at such modern stamps, but these are the very issues that can capture the imagination and attention of many future collectors.

In my opinion, the U.S. Postal Service does a pretty good job of appealing to the diverse interests within the United States.

Sure, I would love to see a stamp commemorating my fellow-Cincinnatian Daniel Carter Beard (founder of the Boy Scouts of America) or Elbert Hubbard, one of the best-selling authors of all time. But I am also pretty happy that Mickey and Donald are receiving their moment in the sun in the 2004 stamp program. I think it is an advantage stamp collecting has over many other hobbies that we can say there truly is something for everyone.

Modern stamps are not challenging. Who in their right mind could possibly say this? The pages of Linn's are filled with reports of varieties of modern stamps that have just been discovered.

Some of the stamps were also precanceled.

Specialist catalogs spell out even more challenges. There are perforation varieties and different types of paper, including one with a very distinctive ribbing.

There are tagging varieties and errors and a host of printing freaks ranging from foldovers to misperforated examples, such as the 2¢ green Sir Wilfrid Laurier stamp, Canada 587, shown in Figure 5. Keen-eyed collectors can find plate varieties, such as the 8¢ Queen Elizabeth II variety (593) known as the "Cowlick," shown in Figure 6.

The variety takes its name from a line emerging from the queen's crown at the top right on the bottom of the two joined stamps.

Such varieties can be found with diligence and patience. Because the stamps are modern, none are going to require a second mortgage on your home to acquire for your collection.

In fact, if you are really patient, you might be able to assemble a good collection of interesting modern Canadian stamps and their various permutations by seeking them in cheap, on-paper mixtures.

A real challenge lies in finding good commercially used covers bearing the stamps. Why is that? When the stamps were in use, they were quite ordinary and ubiquitous.

The lower denominations were used to make up other rates in effect at the time of their issuance. The stamps were considered ordinary and common, so the covers were not saved.

Thirty years later the stamps are sometimes still called "modern" and "cheap," and the covers to which they were affixed are not worth the time or trouble for most dealers to handle.

This makes such covers devilishly difficult to find, especially those showing the stamps properly used in period on covers that illustrate various rates, services and destinations. In this case, modern and cheap do not equate to plentiful and common.

Today's modern and cheap stamps and covers might very well be tomorrow's rarities.

Those who continue to perpetuate the myth that collecting modern stamps is not real or serious collecting do their fellow collectors and the hobby a great disservice.

Let's all be a little more tolerant and realize that stamp collecting has worthy challenges, no matter what era's stamps you chose to collect.