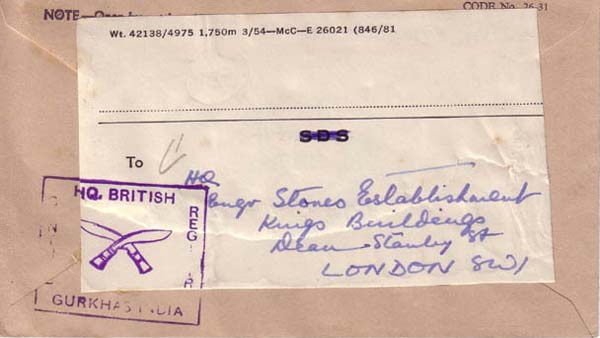 Figure 5. The back of the Figure 4 cover shows that it was originally addressed to India but was rerouted to London. It also bears an "HQ British Gurkhas India" handstamp depicting crossed Gurkha knives. Click on image to enlarge. 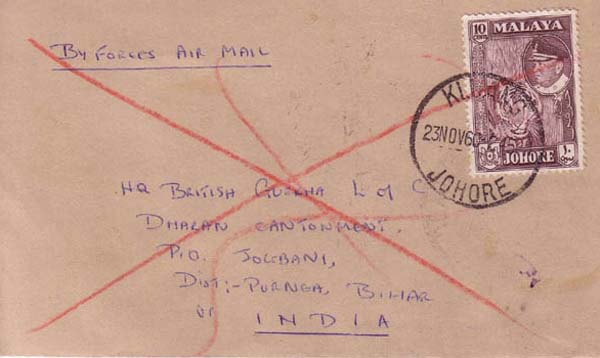 Figure 4. This 1960 cover to a British Gurkha headquarters unit in India was mailed from Malaya a little more than three months after the war against communist insurgents ended. Click on image to enlarge. 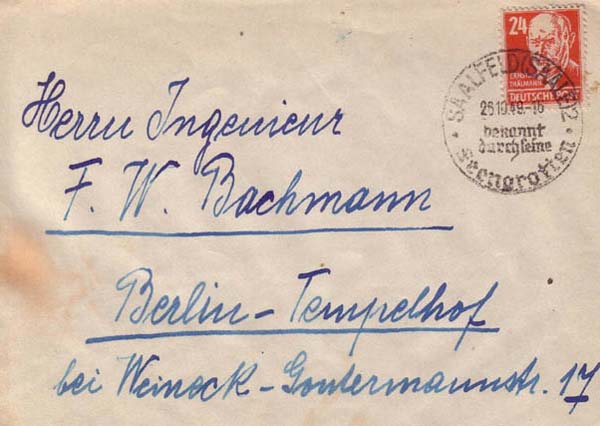 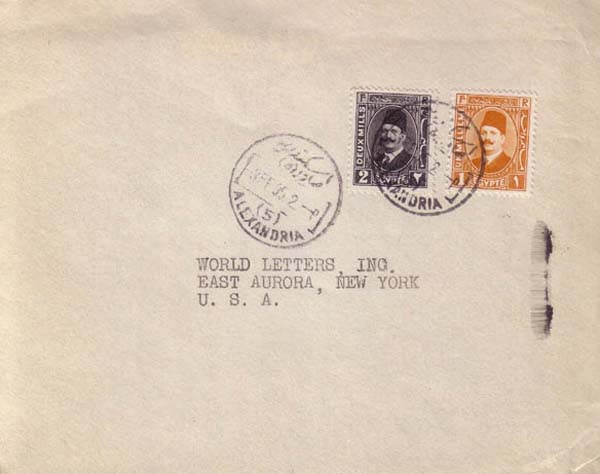 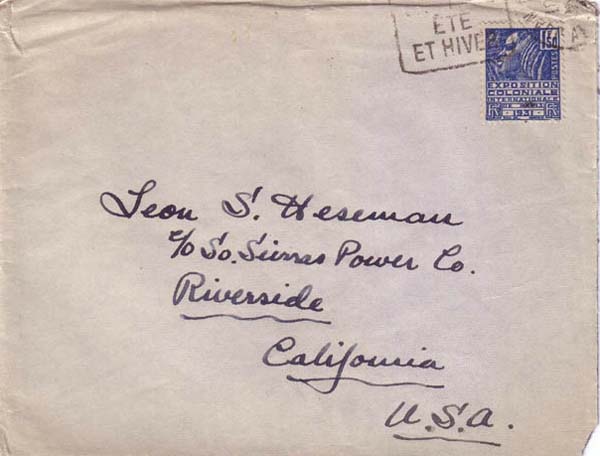 Figure 1. This cover from a dealer's dollar box was mailed in 1931 from France to Riverside, Calif. It still contained an interesting letter and photographs. Click on image to enlarge.
Previous
Next

It is amazing what a couple of dollars will buy at a stamp show.

I attended one recently and decided to look for interesting items that didn't cost more than $2. At first it looked like this was going to be a problem. I was looking at items that would immediately fit into my collections, but they were priced well above my self-imposed limit.

"Think outside of the box," I told to myself. I did so by opening my eyes to areas that I don't collect. These are countries or subjects that I usually pass over when I'm at a show, and that means I miss seeing a whole lot of interesting material.

So I began anew, looking for covers of interest from places I don't generally collect.

I was hoping to find something completely new that would require some research. I wanted to come away from this show with at least one or two new challenges for myself, and a few good stories for Refresher Course readers.

So I had a mission. The next step was to find some covers of character and not spend more than two bucks a pop. Fortunately, several dealers at the show had bargain bins that nicely met my cost criteria, and I wondered if there was undiscovered treasure to be found.

It didn't take long to make my first purchase — the cover shown in Figure 1. It was mailed in 1931 from France to Riverside, Calif. My reason for selecting this prize was not because of the stamp, which is a quite ordinary 1.50-franc deep blue Fachi Woman stamp, Scott 261, from the Colonial Exposition issue.

Nor was it the postmark that caught my eye. In fact, it is so badly struck that the date and place are not on the cover.

So why did I buy it? I bought it because it was thick.

I could tell by the feel of it that there was probably a letter enclosed. One of the forbidden pleasures of stamp collecting is that you sometimes get to read other people's mail.

It turned out to be an even better bargain than I expected, because there was not only a long, two-page letter but also a dozen small black and white photographs of yachts in the harbor at Cannes.

The letter is from a young man who was traveling in France. It is unclear whether one of the yachts was his, or if he was simply bedazzled by the beauty of boats and the harbor.

What is clear is that the sender was having the time of his life.

He begins by saying that he has been behaving himself: "My conduct has been spotless." But in reading the next sentence, I wondered if this report is entirely accurate. He continues, "I found one place where one can absorb Champagne Cocktails at 8fr [francs] (about 32¢ — the price of an egg-malted-milk in the USA). And not only that but the glasses in which said cocktails are served hold as much as the aforementioned malted-milk glass, and not only that, but they fill said glass right up to the brim!"

In a letter such as this, you can easily make a connection between sociology and philately and see the appeal of a new branch of the hobby called "social philately." Philately gives a hold-it-in-your-hands connection with real people from the past and insight regarding how they lived their lives.

My next purchase is illustrated in Figure 2. This cover was mailed Feb. 3, 1935, from Alexandria, Egypt.

The selection factor was nearly the same as for the cover shown in Figure 1. It felt thick.

Additionally, it was sent to an address in East Aurora, N.Y., home of Roycroft, an arts and crafts community I have written about previously. So for a sum that fit my self-imposed budget, I bought the cover.

The letter inside proved to be a surprise. It was a neatly mimeographed travelogue signed by someone named Rex Barton. He obviously was traveling around the world and was augmenting his travel expenses by sending these letters once a week to subscribers.

Receiving one of the "World Letters," as he called them, must have been a real armchair adventure when coupled with the stamps and postmarks on the letters, especially in 1935 in the depths of the Great Depression.

The letter itself is richly detailed and provides much information about the way people lived, what they wore, the language they spoke, the crops they grew, the subjects taught in school and more. The letter begins with an account of an insurrection that he witnessed at the border between Ethiopia and Somaliland.

I was on a roll, having found two frugal treasures and receiving change back from my $5 bill. I continued on my quest, rifling through more boxes.

I latched on to the item illustrated in Figure 3. This was a letter that was sent in 1949 from Saalfeld in the German Democratic Republic to Berlin using a 24-pfennig Soviet occupation of Germany stamp (10N37).

After the defeat of Germany in World War II, the victorious Allies divided the country into zones of occupation. There were American, French, British and Soviet zones. The Allies designed the occupation by zones at the Potsdam Conference.

The Allied plans for a common policy in Germany failed because France wanted to permanently partition Germany and prevent German reunification. There was also a breakdown in the alliance between the United States and Great Britain on one side and the Soviet Union on the other.

The breakdown escalated when the Allies began to organize their occupation zones as a nation, the Federal Republic of Germany, and prepared to return sovereignty to the Germans.

The Soviet Union reacted by organizing the Soviet occupation zone as a Soviet-style communist dictatorship, the German Democratic Republic.

The cover illustrated in Figure 3 was mailed Oct. 26, 1949, 19 days after the German Democratic Republic (East Germany) was officially declared on Oct. 7.

The front of the final $2 treasure is illustrated in Figure 4. It is a cover sent Nov. 23, 1960, from Kiluang, Johore, in Malaya. The cover is addressed to "HQ British Gurkha L of C" in Bihar, India.

I might have passed this by, if I hadn't noticed the red crayon "X" through the address to India. There was no new mailing address on the front of the cover.

I flipped the cover over and got a great surprise when I looked at the back, shown in Figure 5.

There was a mailing label with a new address to London, but what makes this cover special is the boxed marking showing crossed Gurkha knives called kukris. The boxed handstamp reads "HQ British Gurkhas India."

Gurkhas are superb warriors from Nepal. Since the early 19th century, Britain has enlisted Gurkhas to serve in the British and Indian armies in the Gurkha brigades.

At the partition of India in 1947, six regiments of the Gurkhas transferred to the Indian army, and four regiments remained in the British army to form the Brigade of Gurkhas.

When the communists attempted to gain control of Malaya during 1948-60, the British Gurkhas battled communist guerrillas known collectively as the Malay Races Liberation Army in fierce jungle warfare.

The war, known as the Malaya Emergency, was one of many post-WWII wars.

Malaya became independent on Aug. 31, 1957, which robbed the communists of much of their support. On July 31, 1960, the Malayan government declared that the emergency was over, but British forces remained.

I figure I got my money's worth from these items.

Now here is my challenge to you.

Take yourself to a stamp show and see what you can find for $2 or less.

I'll do a follow-up article using some of the treasures found by Refresher Course readers. Happy hunting.