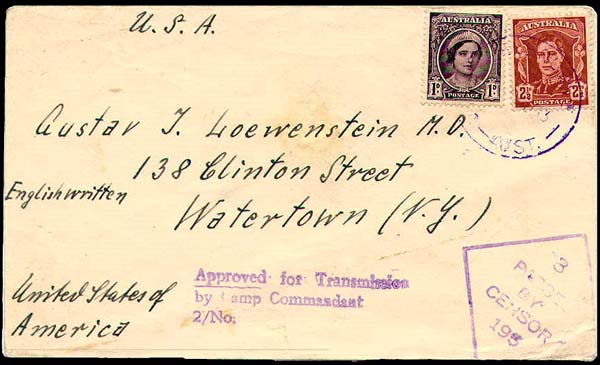 Figure 6. A censored cover sent in 1943 from an internee at Tatura, Victoria, Australia, to Watertown, N.Y. Click on image to enlarge. 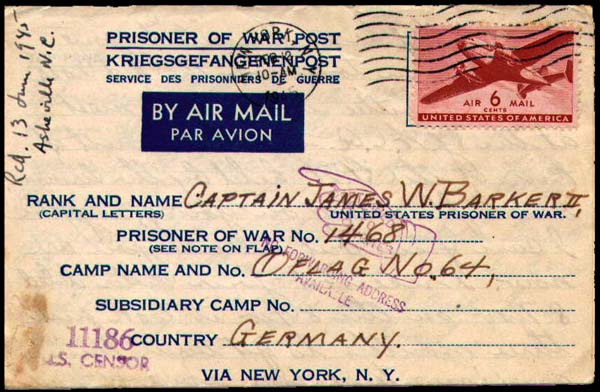 Figure 5. A WWII airletter specifically designed for airmail to POWs. This one was sent to an American officer held at Oflag No. 64, a German prison camp for officers. Click on image to enlarge. 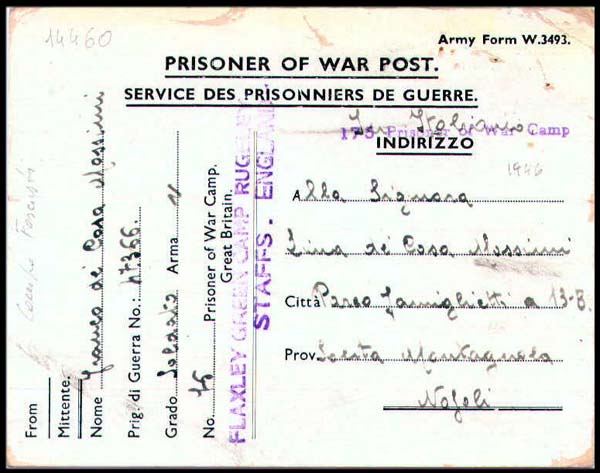 Figure 4. A 1946 postcard sent by an Italian POW from Prisoner of War Camp No. 75, located in Rugeley, England. Click on image to enlarge. 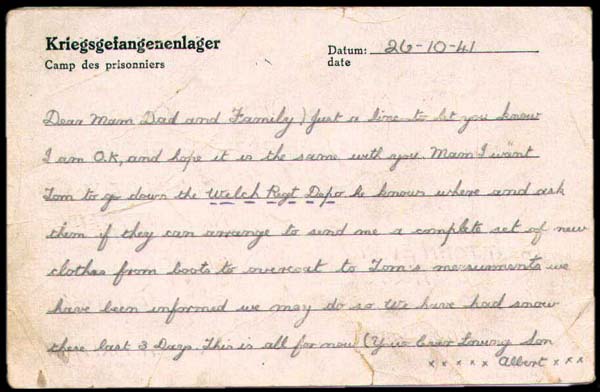 Figure 3. The message side of the POW postcard shown in Figure 2, sent from a Welsh soldier to his family. Click on image to enlarge. 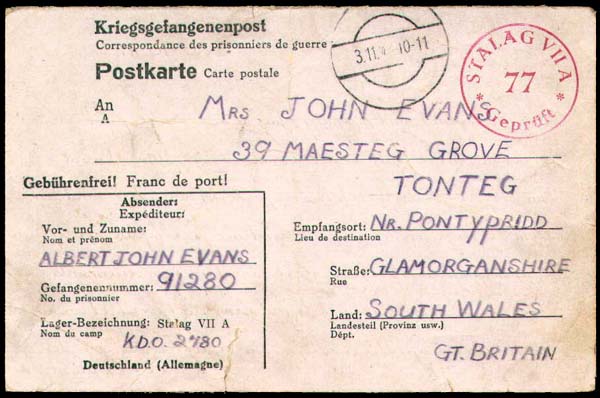 Figure 2. A WWII 1941 POW postcard from a Welsh prisoner held in Stalag VIIA to his family in Glamorganshire. Click on image to enlarge. 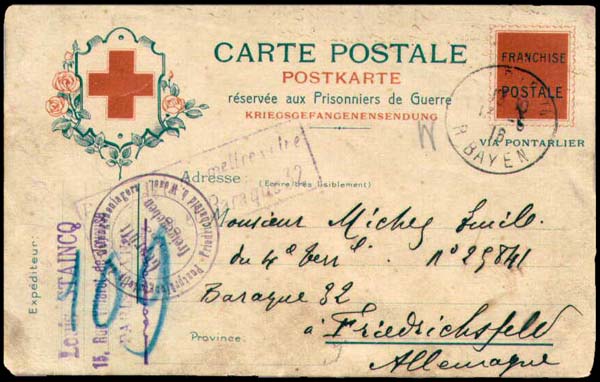 Figure 1. A World War I censored POW transmission card sent in 1916 from Paris to Friedrichsfeld, Germany. Click on image to enlarge.
Previous
Next

Previous Refresher Course columns have told how war interrupts, delays, suspends and otherwise affects the sending and receiving of mail.

One of the more gripping ways that stories of war can be told in the stamp hobby is through the letters and cards of prisoners of war.

Prior to relatively recent times, the treatment of POWs was up to the nation holding the prisoners.

In antiquity, enemy combatants taken in war were often sold as slaves or made galley slaves and forced to row the warships of the capturing nation. Many were executed or tortured to death for whatever information they could provide or simply for entertainment.

One of the most famous stories of cruelty to prisoners of war is that of the Byzantine Emperor Basil, called the "Bulgar Slayer." In July 1014 at the Battle of Kleidion, Basil routed the Bulgarian Tsar Samuel's army, taking more than 14,000 Bulgarian prisoners.

To ensure that these soldiers would never bear arms against the empire again, Basil had 99 out of every 100 men blinded.

The 100th man in each group was blinded in only one eye so that he could still lead his compatriots home.

In more recent times similar barbarism was evidenced during the American Civil War, most infamously at the Fort Pillow Massacre. The unsanitary and inhumane conditions under which prisoners were kept by both sides made the names of Libby and Andersonville synonymous with cruelty.

The formation of the International Red Cross and other relief agencies focused attention on the problem. During World War I, the International Red Cross became involved in providing prisoners of war comfort and aid, and it became an intermediary in the transmission of mail to and from POWs. Figure 1 illustrates a World War I censored POW transmission card sent in 1916 from Paris to Friedrichsfeld, Germany.

In 1929, a prisoners-of-war convention was held in Geneva, Switzerland, to discuss and write a mandate on the humane treatment of war prisoners.

Among the many rules prescribed by the Geneva Convention was one that gave POWs the right to advise next of kin and the International Red Cross that they had been captured. Additionally the convention allowed that prisoners might correspond regularly with their relatives.

By World War II, a system was developed whereby newly captured prisoners could notify the Central Prisoners of War Agency of the International Red Cross by using a standard card called a "capture card" or "carte de capture."

These cards were filled out in duplicate. One was kept on file by the International Red Cross and the other was sent to the next of kin. The cards established postal communication between the prisoner and his immediate family.

Mail to and from POWs was channeled through the International Red Cross or some other neutral intermediary such as the Vatican through the Apostolic Nuncio in Lisbon, Portugal.

The number and frequency of mailpieces each prisoner was permitted to send varied by country and sometimes by camp and by military rank.

Civilians writing to POWs were encouraged to keep messages to a minimum. In Great Britain, for example, families of POWs were instructed to limit letters to no more than two a week, and the letters must only deal with purely personal matters. The senders were specifically warned against references to naval, military, aerial, economic or political matters, or to movements of troops, ships or planes.

Regular POW mail was usually sent free of charge, but this varied among nations. Sometimes airmail and other services were available to POWs at the regular rates in effect at the time of mailing. Most frequently, POWs were provided forms, cards or other items of stationery, the use of which was compulsory.

Figure 2 shows a postcard sent in 1941 by a British soldier held at Moosburg prison. It was sent to Tonteg, Glamorganshire, Wales.

The card bears a red circular "STALAG VIIA" marking that identifies this as originating from Moosburg, a prison that held 80,000 Allied soldiers.

The cover bears a double-circle postmark with a bar through the middle. This is called a "bridge type" postmark, and this particular example is mute, meaning it does not convey the place of mailing within the two semi-circles above and below the bar.

One interesting aspect of these postcards and some other types of postal stationery is that the postal markings are interesting to figure out, and the messages are there to be read, giving insight to what life was like in the prison.

The message on the reverse of the Figure 2 card is shown in Figure 3.

The card is addressed to "Mam, Dad & Family" asking them to get the Welsh Regiment to send a new set of clothes and books.

Figure 4 shows a 1946 card from an Italian POW held in Britain. The marking on the card indicates that it was sent from "Prisoner of War Camp No. 75," which was the Flaxley Green camp located in Rugeley, Staffordshire, England.

Figure 5 illustrates a folded airletter sheet specifically used to send mail by air to POWs. This card was sent to an American officer held at Oflag No. 64 in Germany, a camp for captured officers.

Airletter sheets similar to the one shown in Figure 5 were used by other countries. Australia developed nonfranked letter sheets called "Notelopes" and even Christmas and New Year greeting cards that were distributed for use by POWs in Australia.

Of course, ordinary envelopes were used too, such as the one shown in Figure 6, sent in 1943 from an internee at Tatura, Victoria, Australia, to Watertown, N.Y.

In Germany, prison camps were separated for specific purposes. An "Oflag," such as the one mentioned in connection with the cover shown in Figure 5 was a camp for officers. A "Stalag" was a camp for soldiers and noncommissioned officers, and a "Dulag" was a transit camp.

There were other types of POW camps too. Some were for civilian prisoners or other internees, such as the concentration camps that held political enemies of the Nazi Party, criminals, Jews, Gypsies and other people the Nazis considered undesirable.

These nonmilitary prisoners were not protected by the 1929 Geneva Convention mandate, and the names of those prisons — Bergen-Belsen, Dachau, Auschwitz and others — have become synonymous for man's inhumanity to man.

Just after the Japanese bombing of Pearl Harbor, western U.S. citizens and residents of Japanese ancestry were sent to relocation camps. Letters to and from concentration and relocation prisons are highly collectible, although they are not plentiful.

When hostilities ceased, other types of camps were established to handle the multitude of displaced persons and refugees.

All tell an unpleasant but important story of how prisoners sent and received messages during times of war.