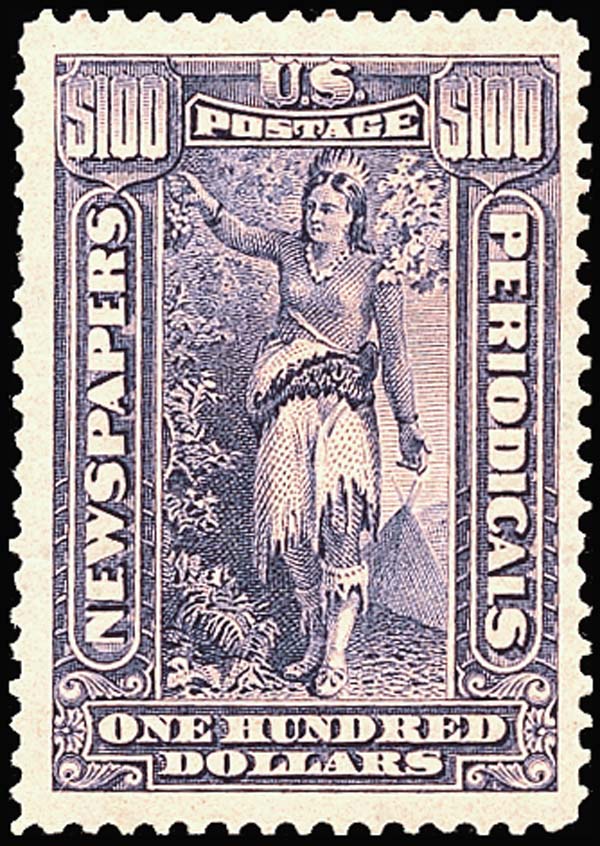 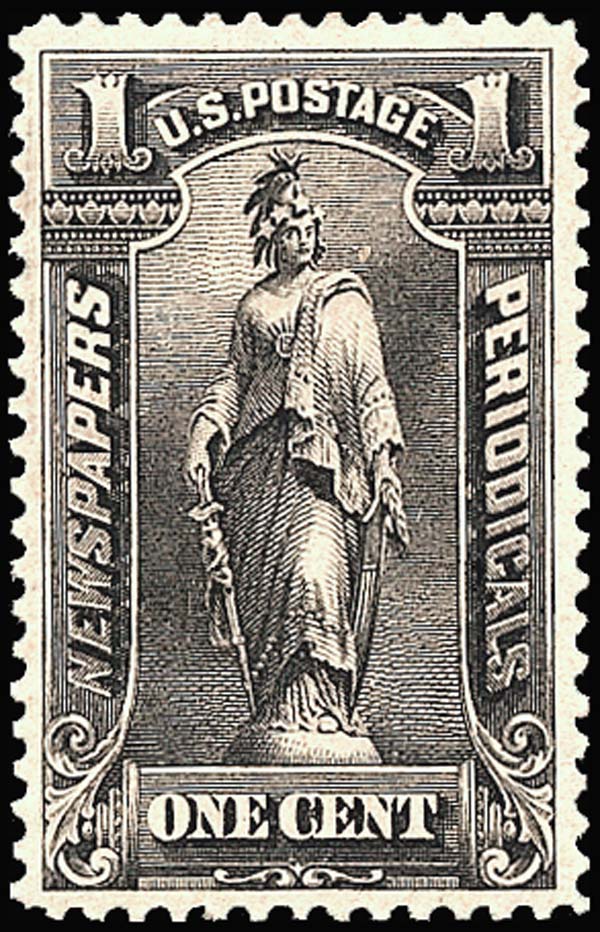 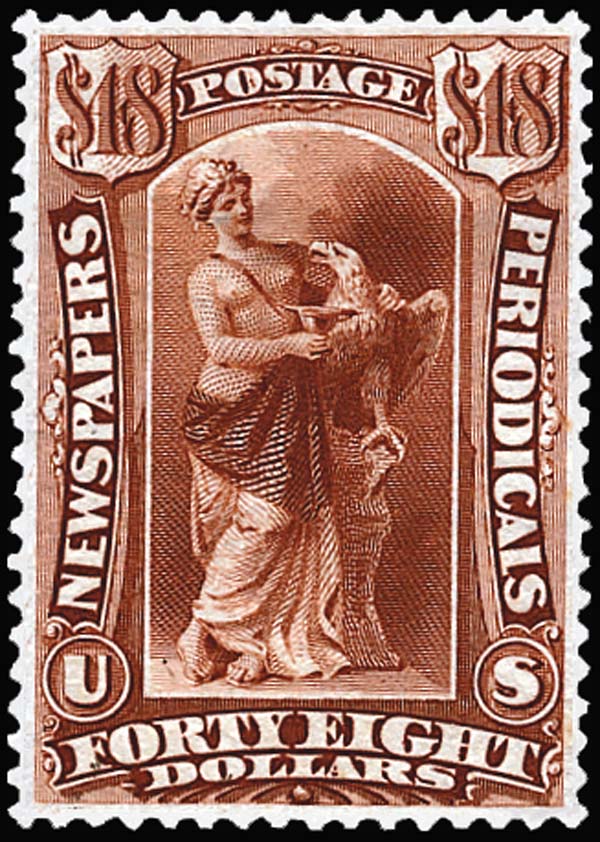 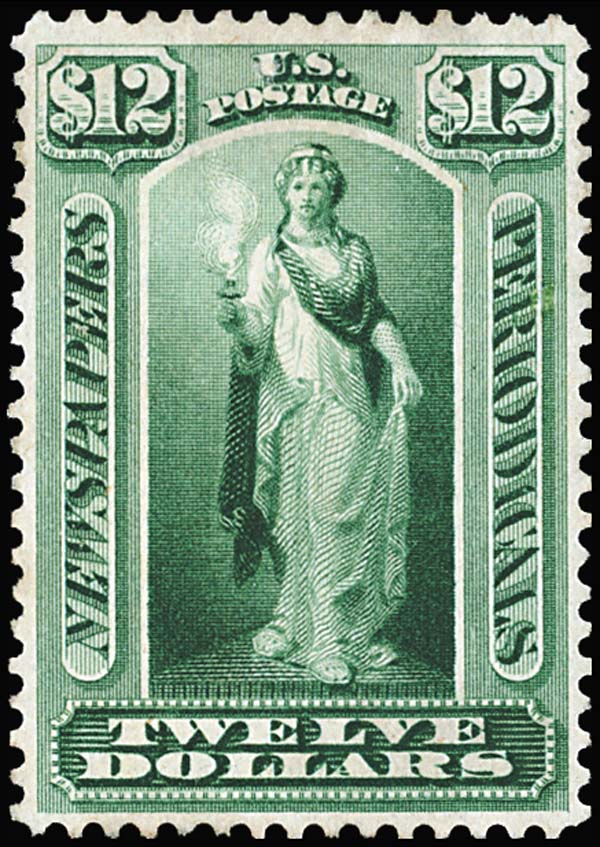 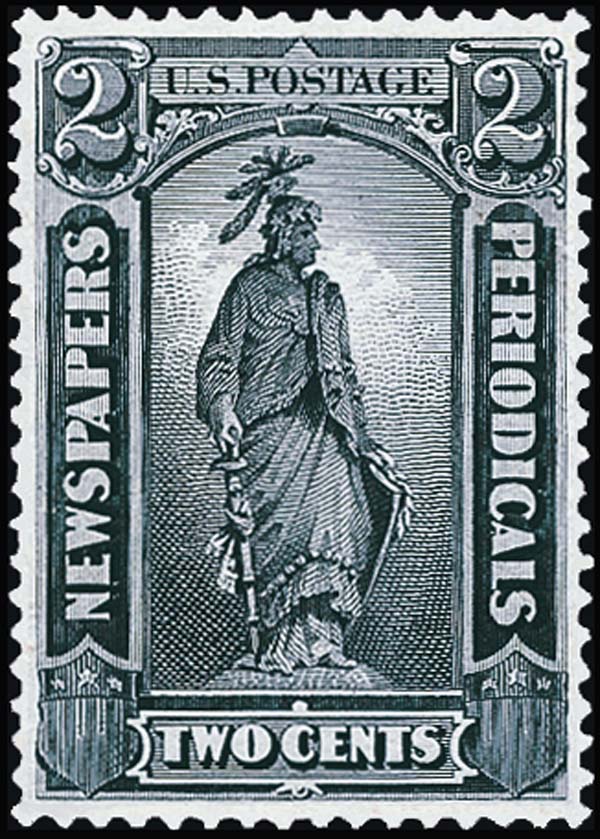 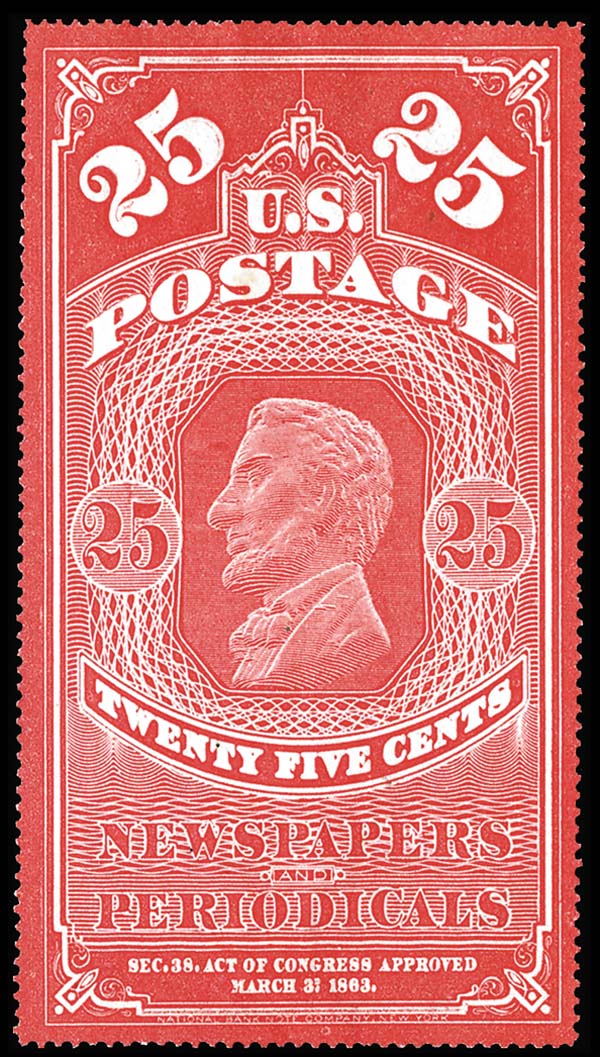 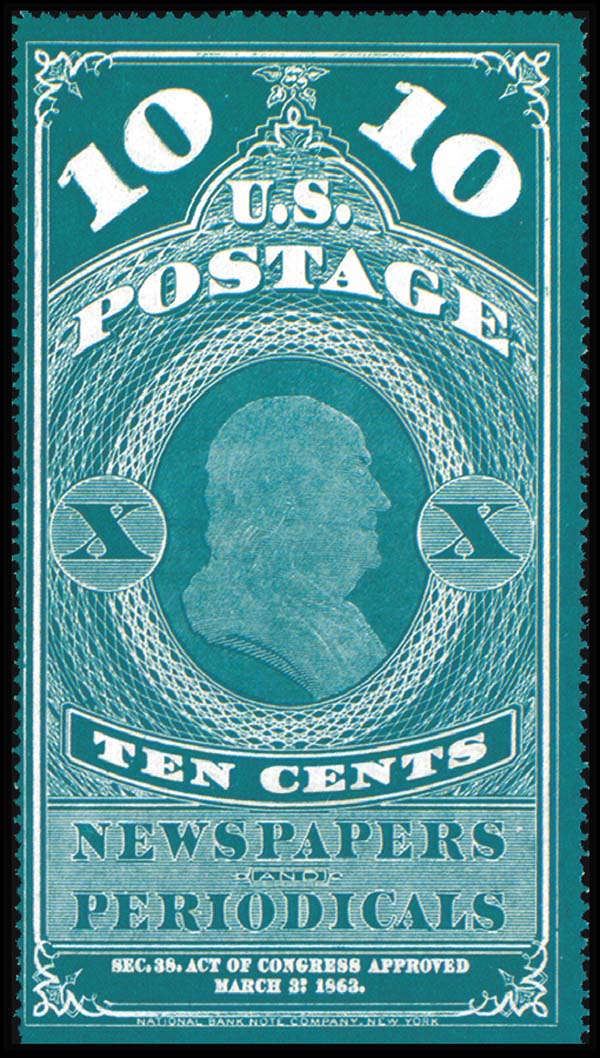 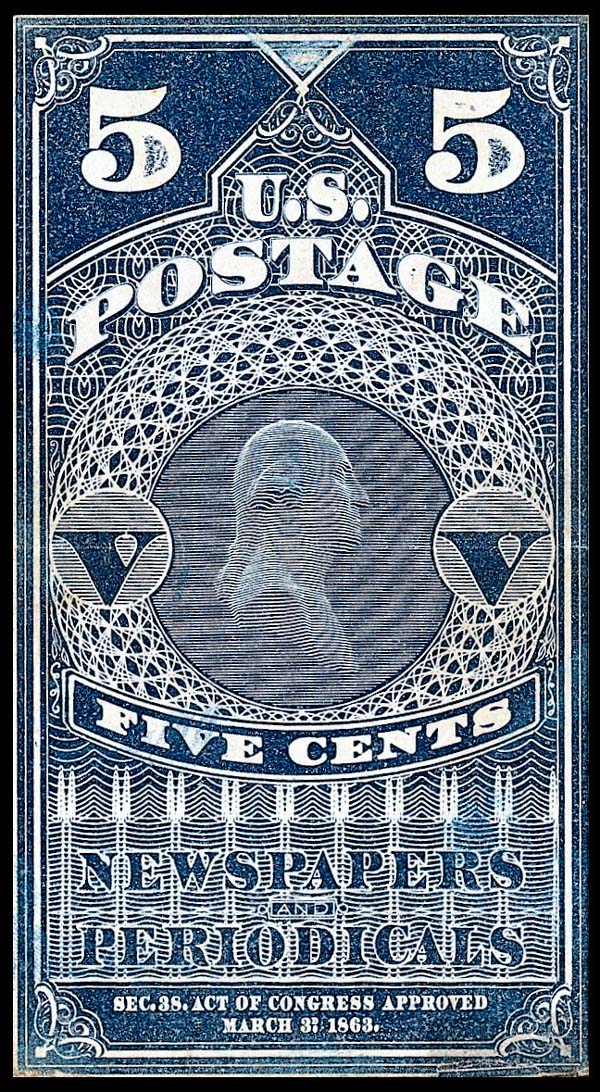 Some of the most beautiful postage stamps ever issued by the United States were never valid for prepayment of letter postage. They were used solely for prepayment of bulk shipments of newspapers and periodicals.

The first newspaper stamps were issued by Austria for use beginning Jan. 1, 1851.

The United States issued its first newspaper stamps 14 years later in 1865, but unlike most foreign newspaper stamps, the U.S. stamps were intended for bulk parcels of periodicals rather than for individual newspapers.

In 1863, Congress passed an act that allowed route agents (postal employees who worked on trains or vessels) to accept newspaper parcels at the train or vessel and turn them over for delivery from the train or vessel without having to physically route them through a post office. Postage fees were paid in cash upon presentation of the parcels to the route agent.

In 1865, the Post Office Department introduced newspaper and periodical stamps as an accounting tool to preclude unscrupulous agents from pocketing the fees.

The typographed and embossed stamps were printed on thin, hard paper and were issued without gum. At 2 inches by 3¾ inches, they are among the largest postage stamps ever issued.

The stamps were large and colorful so that, like private express company labels, they would be easily seen when they were glued to large bundles of newspapers.

The striking designs were highly intricate to discourage forgery. Issued in denominations of 5¢, 10¢ and 25¢, they were sold to periodical publishers and news agents.

The 10¢ blue-green Benjamin Franklin newspaper stamp, U.S. Scott PR2, is shown in Figure 2. The stamp has a straightedge at bottom.

Given Franklin's history as a printer, editor and publisher, his appearance on a newspaper stamp is most appropriate.

The 25¢ orange-red Abraham Lincoln newspaper stamp, Scott PR3, shown in Figure 3, rounds out the first U.S. newspaper stamp issue, which was in use until 1869.

The 5¢ Franklin stamp was also issued on yellowish paper with a white border and as such is listed as U.S. Scott PR4.

The 10¢ and 25¢ stamps and the 5¢ stamp with the white border were also printed on pelure paper and are listed as such as varieties with minor numbers.

Very few of the used first newspaper stamps survived beyond their immediate purpose. They were usually discarded with the bundle wrapper when it was cut open to remove the papers.

The Scott catalog notes that virtually all used examples of Scott PR1-4 are canceled by blue brush strokes and that used stamps are rare.

Scott values the stamps only in unused condition.

Usage of the stamps was discontinued in 1869, and the old system of paying postage in cash was resumed.

By the Act of June 23, 1874, Congress again authorized the use of newspaper and periodical stamps after a recommendation from the postmaster general estimated that as much as two-thirds of the postage collected for newspapers and periodicals was never turned in.

The new newspaper and periodical stamps were printed on thin, hard paper by the Continental Bank Note Co., which delivered them to postmasters in December 1874. The stamps were placed in use effective Jan. 1, 1875.

Twenty-four stamps were issued in values ranging from 2¢ to $60. The stamps are listed as Scott PR9-32.

The denominations were designed to provide for the payment of postage for up to 1 ton of newspaper parcels of either class through the use of no more than five stamps.

Again the stamps are large, and the designs are elaborate and attractive. They feature female allegorical figures ("Freedom," "Justice," "Victory," "Peace" and "Commerce") and goddesses from Greek mythology (Ceres, Clio, Minerva, Vesta, and Hebe). The high-value $60 stamp portrays an Indian maiden.

The newspaper stamps of 1875 and later were never designed or intended to be affixed directly to bundles of papers.

At first the stamps were sold in advance to publishers, who would turn in the required amount when shipments of papers were presented for mailing.

A receipt was issued to the publisher, and the stamps were affixed to the receipt stub maintained by the post office and were canceled, initially by punching and later by pen cancellation.

Later, the sale of newspaper stamps to anyone was forbidden. The publisher paid the postage in cash, and the postal employee affixed the required number of stamps to the receipt stub and canceled them.

Stubs with affixed stamps were periodically turned in for accounting and destruction. The used newspaper stamps of this era in collector hands today were salvaged from postal rubbish.

In 1875, the POD produced special printings of all stamps issued up to that time in conjunction with the Centennial Exposition to be held in Philadelphia, Pa., in 1876.

The American Bank Note Co. issued newspaper stamps using the same plates that had been used by Continental, but the stamps were on soft, porous paper and in slightly different colors. The 9¢ stamp was not among the 1879 issues. The stamps are listed by Scott as PR57-79.

By the Act of March 3, 1879, effective May 1 of that year, the newspaper and periodical rate was adjusted to 2¢ per pound regardless of the periodicity of the publication.

An 1883 special printing of the 2¢ black Statue of Freedom stamp by the American Bank Note Co., is listed by Scott as PR80.

Effective July 1, 1885, the rate was again reduced, to 1¢ per pound for any bulk periodical mailing.

This necessitated production of a new 1¢ stamp. The American Bank Note Co. produced the new stamp using the same Statue of Freedom design as the earlier low-denomination newspaper stamps.

On July 1, 1894, the contract for producing United States postage stamps was awarded to the Bureau of Engraving and Printing.

Using the plates from the previous printers, the Bureau produced 12 newspaper stamps in face values from 1¢ to $6 on white, semi-transparent paper. The plates were cleaned up and re-entered, and the stamps produced have a generally clearer impression and were printed in slightly different colors.

At the same time that the Bureau was printing newspaper stamps from old plates, its designers and engravers were working on producing new stamps from new designs.

With the exception of the 1¢ through the 10¢, the central vignettes from some of the earlier stamps were re-used, but with new framing designs and devices. The low-denomination stamps still showed the Statue of Freedom, but from a frontal rather than a profile view as on the earlier stamps.

New Bureau-produced stamps were issued in 1895-97 on double-line "USPS" watermarked paper. These stamps are listed by Scott as PR114-25.

The use of newspaper and periodical stamps was discontinued as of July 1, 1898, and the stamps were demonetized.

U.S. newspaper and periodical stamps are undeniably attractive, but collecting them is not for everyone. None of them are cheap, and some are howling rarities with only a single example known.

But even if we all can't afford to collect newspaper stamps, we can all enjoy looking at them and wishing.