Kick it up a notch: how to get specialized 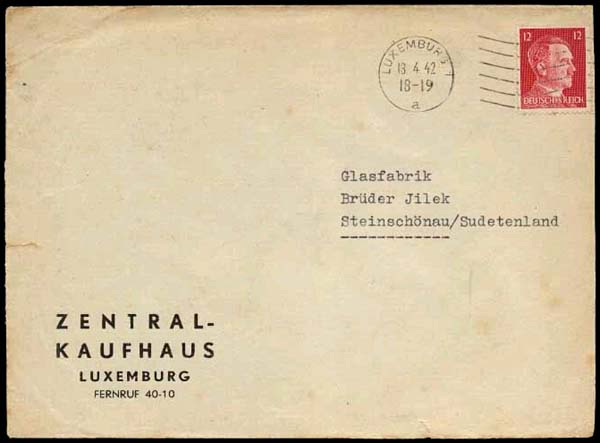 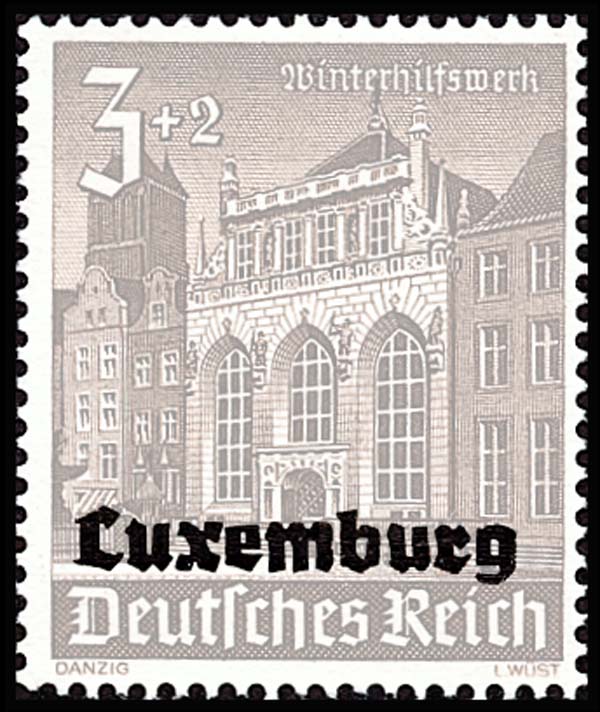 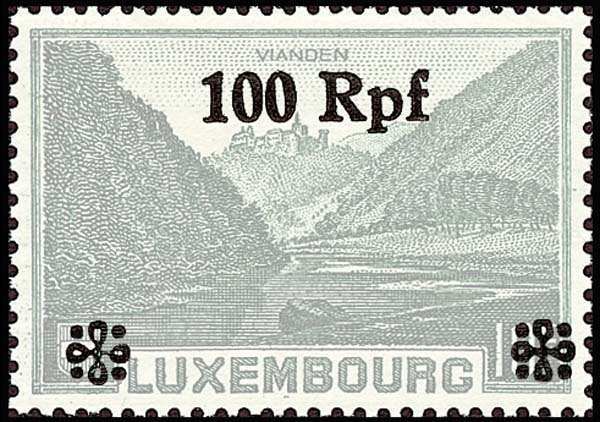 Figure 3. A 100rpf-on-10fr Castle From Our Valley occupation stamp, Scott N32. Click on image to enlarge. 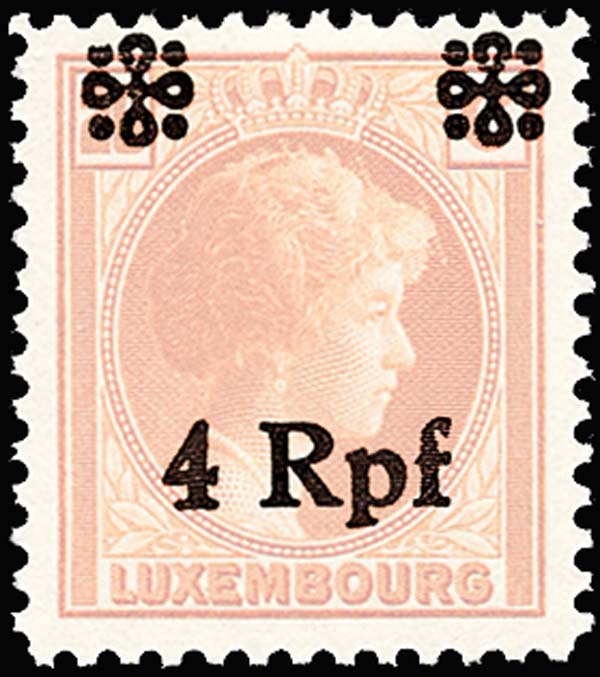 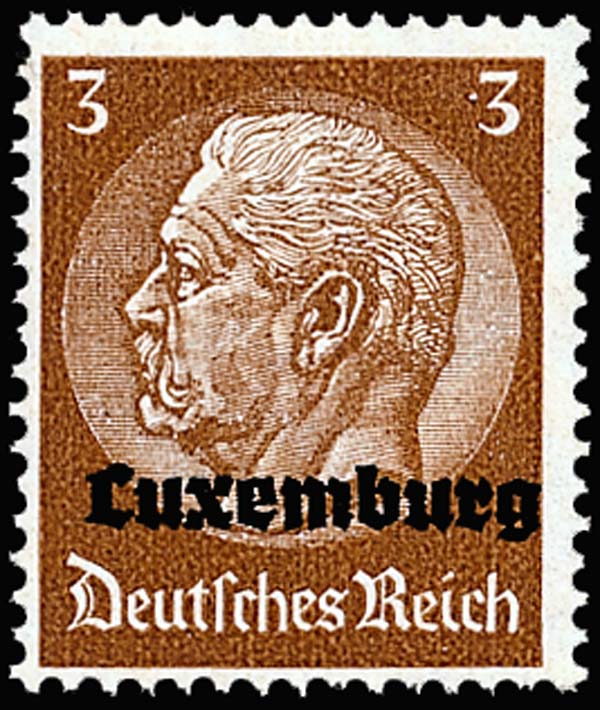 It doesn't happen to every stamp collector, but eventually some of us want more out of our collections than simply putting stamps into a preprinted album. One day you might feel that the thrill is gone and collecting just isn't as much fun as it once was. When this happens, you need to "kick it up a notch," as a famous TV chef is wont to say.

But where do you go from here? Maybe concentrating on one area of your collection for a while will suffice. Or maybe you will decide to specialize.

Linn's reader Francois Steicher put it nicely, "I have been a collector of Luxembourg since I was about 5 years old. I started to look around for an area, still within Luxembourg, which might engage my interest more robustly. I settled on the stamps of the German occupation of Luxembourg because they appeared to be under-collected and not very well researched.

"Unfortunately, my purchasing and research have been rather scattershot. If I were to study this era philatelically, how should I start? What questions should I be asking? Who was in the habit of sending mail from Luxembourg during the war? Were these mostly administrative or military officials? What postal history books should I start with?"

The Grand Duchy of Luxembourg is located in Western Europe between Belgium, France and Germany. It was occupied by Germany during both world wars.

In 1914 the German army moved quickly through Luxembourg, stationing troops at important railway junctions as well as at Luxembourg City.

There was no resistance because Luxembourg's army was little more than a ceremonial palace guard.

Although occupied for the duration of World War I, the day-to-day running of the country was left to the Luxembourg government.

No occupation stamps were issued and the administration of the posts was left to the Luxembourgers.

On May 10, 1940, the German Blitzkrieg rolled through Luxembourg, conquering and occupying the country in less than a day.

Initially the German army administered the country under martial law. German President Paul von Hindenburg stamps were overprinted "Luxemburg" for use in the occupied country. A 3-pfennig bistre overprinted stamp, Scott N1, is shown in Figure 1.

All of the above information is available from general sources, such as the Scott Standard Postage Stamp Catalogue and basic encyclopedias.

I wanted to help Steicher, but my philatelic knowledge of the German occupation of Luxembourg is decidedly limited. So I began thinking about what I did when I last started collecting a new area in a specialized way. The first thing I did was research the subject.

One of the most awesome tools available to any collector beginning a new project is the American Philatelic Research Library. Its card catalog and article index are online and available to anyone who wants to use them at

Searching the card catalog and article index is not difficult, but there are some tricks to doing it well. Using symbols to better delineate your search parameters will make your search much more effective.

For example, for Steicher's German occupation of Luxembourg, I accessed the article index and in the box labeled "Keyword" I entered "Luxembourg & occupation."

The "&" sign means both the words "Luxembourg" and "occupation" need to be present, so the results that were returned included both words.

Had I used a "/" instead of "&," either or both words need to be present, thus enlarging the number of search hits, but not necessarily hitting on the occupation of Luxembourg.

These symbols and others are clearly explained by accessing the "Help" button at the bottom of the screen.

Several offerings were suggested by the search. The most likely are: Michel's Atlaz zer Deutschland — Philatelie, Katalog der Stempelmarken von Deutschland VIII. Besatzungsausgaben 1914-1919/ 1939-1945 by Martin Erler; "German Occupation of Luxembourg in WWII" by George MacKenzie published in Postscript in 1995; and"Occupation of Luxembourg" by M.C. Gilhausen, published in the May 1995 issue ofGerman Postal Specialist.

For me, this service alone, provided by the friendly, helpful staff of the APRL, is worth the price of APS membership.

The next thing I would do when beginning a specialized collection is to try to find other kindred spirits with whom I can interact, swap stamps and learn. I wondered if there was a society for Luxembourg collectors.

Google, located at www.google.com, is certainly the most popular and arguably the most effective general search engine available on the Internet.

I did a Google search and came up with the Luxembourg Collectors Club, located on the web at www.luxcentral.com/stamps/LCC.

The Germany Philatelic Society is another useful resource for studying the occupations of Luxembourg. For more information write to Christopher D. Deterding, Box 779, Arnold, MD 21012-4779 or visit the society web site located at www.gps.nu.

The Third Reich and the German occupations are of interest to many members of this society, which publishes specialized articles on such subjects in its monthly journal, German Postal Specialist.

When researching postal history of any area, one is often drawn into the social history of the place as well.

This adds a great deal of dimension to the project you are working on because you get insight into the way people lived, how events affected their lives, and the importance of communication. These social aspects, however, can often be exceedingly difficult to investigate.

Reading social, economic or military histories of the place you are collecting can be very useful, and even more useful are the bibliographies that often accompany such works.

If the books you are reading are recent, you can sometimes contact the author. I have been very pleasantly surprised on several occasions to receive helpful responses from authors who patiently answered questions I had and shared information sources.

In one instance I tracked down the last known address of a woman who wrote a book in the 1930s about several sea voyages she and her husband took across the South Pacific and around the world.

Her book had a profound impact on a project that interested me. I wrote to her at the last known address, and within a couple of weeks, I had a response signed by the author. Her letter became an additional treasure in my collection.

I have found that local museums can be a great resource, and many have archives that can be accessed directly through the Internet.

One of many useful web sites is that of the National Museum of Military History in Diekirch, Luxembourg, at www.luxembourg.co.uk/NMMH/.

In no time at all I was reading about the German invasion and subsequent occupation of Luxembourg in WWII.

It was here that I learned that Luxembourg was incorporated into the German Reich as Gau Moselland in 1941, which explains why no further occupation stamps were issued for Luxembourg after that date.

Once Luxembourg became a German district (Gau), German stamps were used there.

A cover mailed April 18, 1942, from Luxembourg City to Steinschoenau, Sudetenland (formerly in Czechoslovakia), is shown in Figure 5. The cover is franked with a 12pf carmine Adolf Hitler stamp, Scott 511B.

There was also information on the resistance movement within Luxembourg, the Battle of the Bulge and the final liberation of the country.

Often museum web sites have contact information where you can send e-mail. I have found many museums to be very helpful in answering questions and in some cases providing access to files from their archives that have proved to be useful to my collecting.

Approaching the museums should be done carefully. Be careful not to waste their time.

Explain that your interest is in postal communications, and be as specific as possible as to the kind of information you need. If you request photocopies, books or other reference material, be prepared to pay for these items. And most importantly, never forget to say thank you.

Once you start delving into archives held by museums, post office records and government documents, you are using primary sources for your research.

Primary sources can be a double-edged sword. Official records document the way things were supposed to be. However, adding the human factor sometimes makes unraveling history difficult.

For example, perhaps you find the post office postal rates for an area you collect during a certain time period, and yet you have some covers that are either overfranked or underfranked.

How do you explain that? Did a postal clerk misunderstand the rates? Were there shortages of certain necessary denominations of stamps in the post office? Was there another rate or a service that was not included on the official document from which you are working?

Sometimes further research will be needed. Occasionally you will be left to speculate about what happened. On rare occasions, a first-hand report gleaned from an interview with someone who remembers or a letter or diary will shed more light on the mystery. The process of seeking the answers is as engaging and engrossing as collecting the stamps and covers themselves. Getting there is half the fun.

Most of the advice in this column recommends using the Internet to help find the information you seek. The Internet is a great tool that will make things faster and easier, but you can go about all of this the old fashioned way too.

You can contact the American Philatelic Research Library by mail at Box 8000, State College, PA 16803 and ask for help that way.

You should also consider joining some specialist societies that will help in your quest. You can personally visit museums and make an appointment to use the archives.

The telephone and ordinary mail still do work and should not be overlooked as research tools.

If, like Francois Steicher, you are looking for something that will "engage your interest more robustly," you should decide what part of your collection you find to be the most intriguing, and then "kick it up a notch."