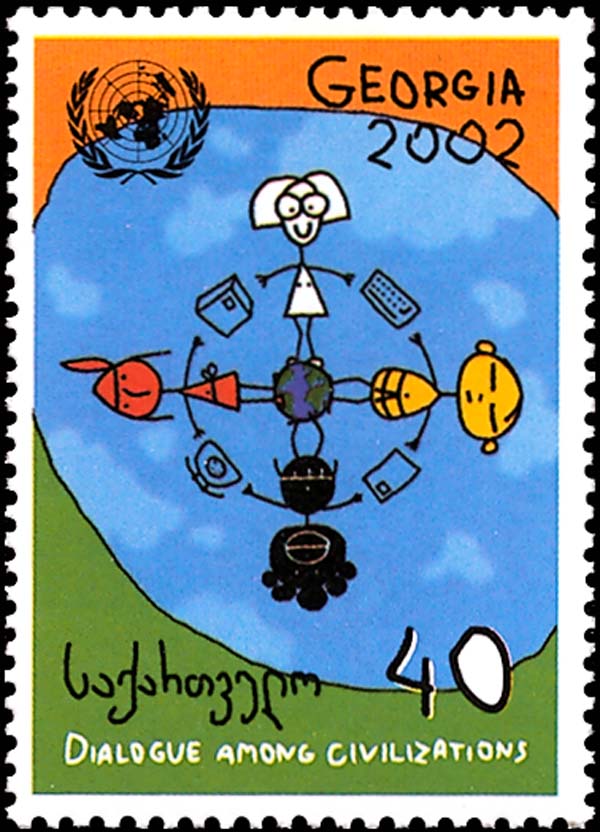 Figure 9. A Georgian 40-tetri Year of Dialogue Among Civilizations stamp (287). At least 63 postal administrations participated in this omnibus issue, with most using this design for at least one stamp. Click on image to enlarge. 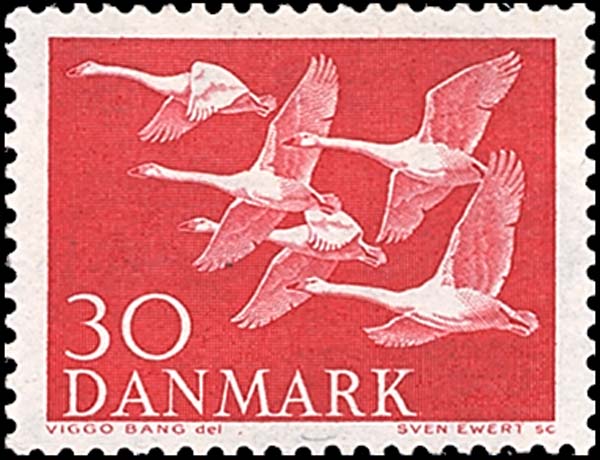 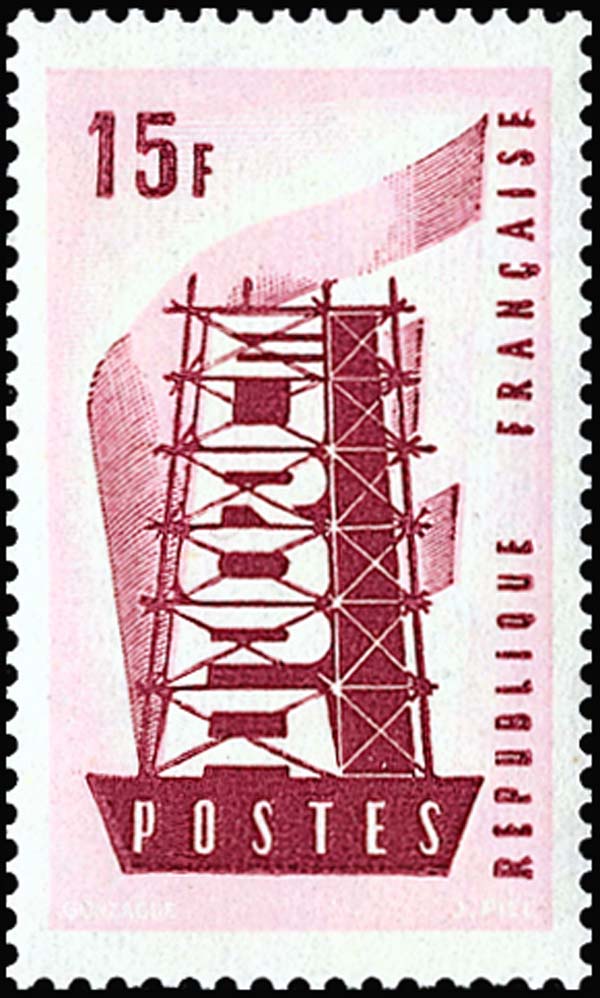 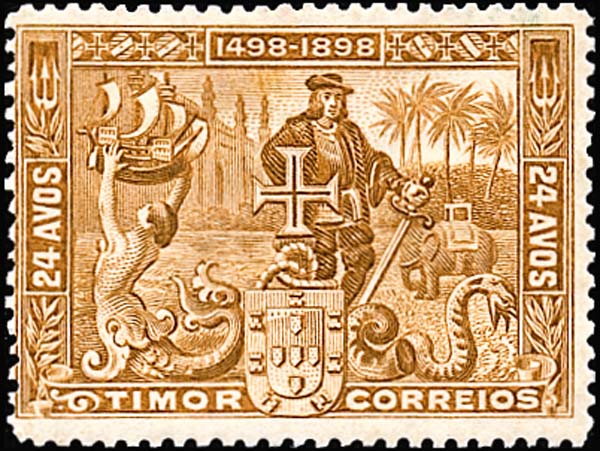 Figure 5. A Timorese 24-avo bister Vasco da Gama stamp (52) from the world's first omnibus issue produced for Portugal and its colonies. Click on image to enlarge. 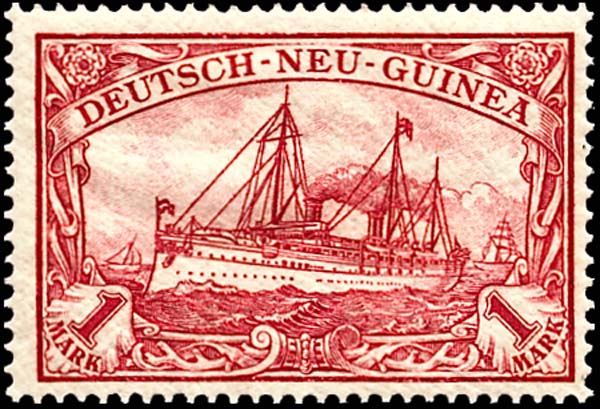 Figure 4. A 1-mark carmine Kaiser's Yacht Hohenzollern stamp (German New Guinea 16). Germany issued definitive stamps with the same designs for all of its colonies. Click on image to enlarge. 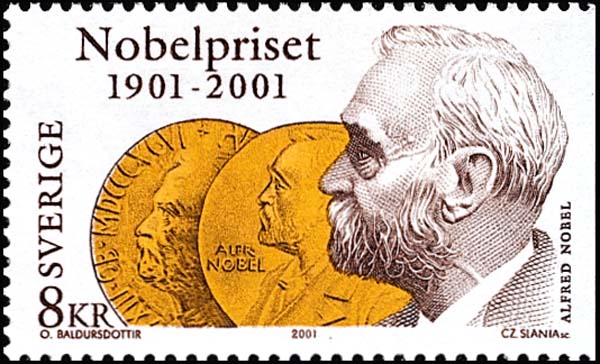 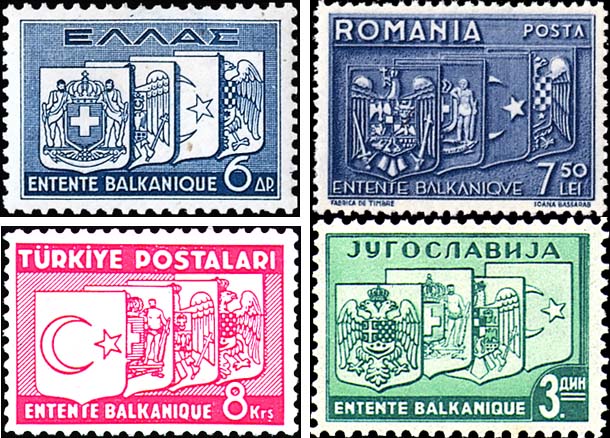 Figure 2. These stamps issued by Greece, Romania, Turkey and Yugoslavia in 1937-38 to commemorate the Balkan Entente are probably the world's first joint-issue stamps. Click on image to enlarge.

Figure 1. Although they have very similar designs, these 1851 3-penny stamps from New Brunswick and Nova Scotia are considered stamp twins rather than a joint issue. Click on image to enlarge.
Previous
Next

Finding a good working definition for a joint stamp issue is harder than you might think. Many of the standard philatelic references, including the reference section of Linn's web site, do not provide one.

Neither do the Standard Handbook of Stamp Collecting by Richard McP. Cabeen,Fundamentals of Philately by L.N. Williams and All About Stamps by Wayne L. Youngblood.

But Michael Baadke, in the recently published Linn's Complete Stamp Collecting Basics, comes to the rescue with this definition: "An officially sanctioned stamp or postal stationery issue by two or more countries to commemorate the same subject. Joint issues are often stamps bearing similar designs issued on the same day by both countries."

The qualifier "often" in the second sentence of the definition is important, because many joint-issue stamps have different designs and many were not issued on the same day.

Some collectors might consider the Crown and Heraldic Flowers of the United Kingdom stamps issued by New Brunswick and Nova Scotia in 1851 as the first joint issue. The 3-penny red stamp, New Brunswick Scott 1, and the 3-penny bright blue Nova Scotia stamp (2) are shown in Figure 1.

Most collectors would consider these stamps to be "stamp twins," not a joint issue. Stamp twins are stamps with similar designs that were not issued as a result of a formal agreement between postal authorities to commemorate the same subject.

The Balkan Entente, signed Feb. 9, 1934, was an interwar collective security pact intended to protect the signatories from Bulgarian or Albanian revanchism or aggression.

Although they all commemorate the same subject, the stamps were not all issued on the same date. Turkey and Yugoslavia each issued two stamps Oct. 29, 1937, Greece issued a single stamp Feb. 8, 1938, and Romania issued two stamps Feb. 10, 1938.

Notes in the Scott catalog following the listings for both stamps, say that the stamps are a joint issue and give a cross reference to the catalog numbers.

The Scott catalog provides this information for many joint stamp issues after World War II.

All U.S. joint issues through 2001 are listed in the book Linn's Complete Stamp Collecting Basics.

The original omnibus issues are the 1898 Vasco da Gama stamps and postal stationery (issued by Portugal for itself and its colonies) and the 1935 George V Silver Jubilee stamps (issued by an agent for many British Commonwealth members). Both have common designs, with only the name of the country or colony and the denomination and currency being different.

The basis of an omnibus issue is that it is planned and that there is an overseeing authority: Portugal in 1898, Crown Agents in 1935. For Europa issues, the authorities are the joint postal conferences of the European national postal administrations.

Sometimes the postal administrations producing an omnibus issue are linked by a colonial relationship or by having their stamps produced by the same agent, such as the Inter-Governmental Philatelic Corp. of New York City, but this is not a requirement.

The Europa stamp issues, commemorating the theme of European unity, began in 1956 with Europa stamps issued by Belgium, France, Germany, Italy Luxembourg and the Netherlands. The scope of European unity has grown considerably since then. A total of 55 postal administrations participated in the 2000 Europa omnibus issue.

The French 15-franc rose and rose-lake Rebuilding Europe Allegory stamp (805) in the first Europa omnibus issue is shown in Figure 7.

The Scott catalog illustrates the stamp designs of some omnibus issues in the Common Design Types section at the front of the catalog. The stamps illustrated in this section are not shown in the country listings of the individual countries. A note with the listings for these stamps refers the user back to the Common Design Types section to see what the stamp design looks like.

Not all omnibus issues are illustrated in the Common Design Type section. This section is limited to the omnibus issues of Europa, Portugal and Colonies, France and the French Community, and the British Commonwealth.

Other omnibus issues, such as the Year of Dialogue Among Civilizations omnibus coordinated by the Universal Postal Union in 2001-02, are not noted as such in the Scott catalog.

The Georgian 40-tetri stamp (287) from the Year of Dialogue Among Civilizations omnibus issue is shown in Figure 9.