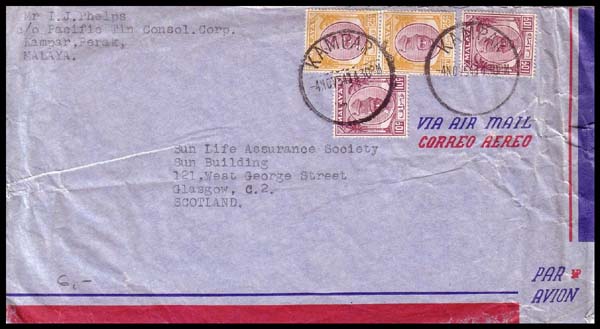 Figure 5. A cover mailed Nov. 4, 1954, from Kampar, Perak, to the Sun Life Assurance Society in Glasgow, Scotland. Click on image to enlarge. 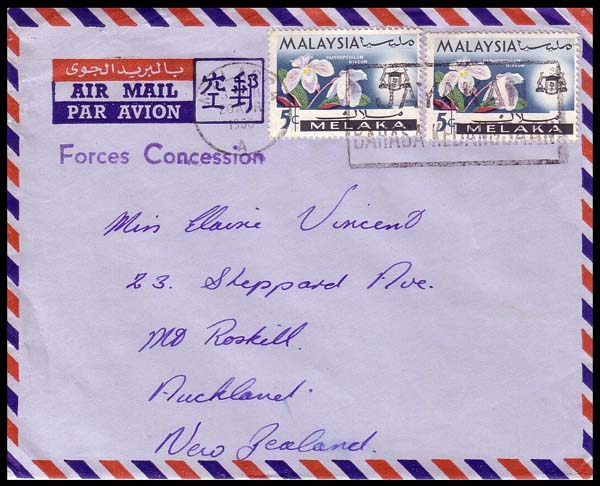 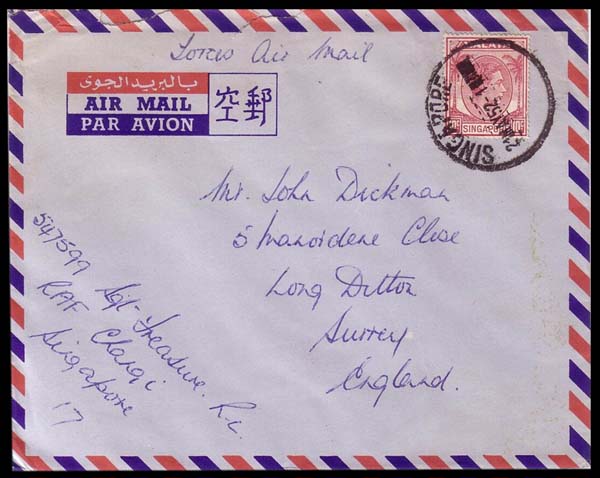 Figure 3. A letter posted from Singapore May 21, 1952, to Surrey, England, from a British noncommissioned officer stationed at the British air base at Changi in Singapore. Click on image to enlarge. 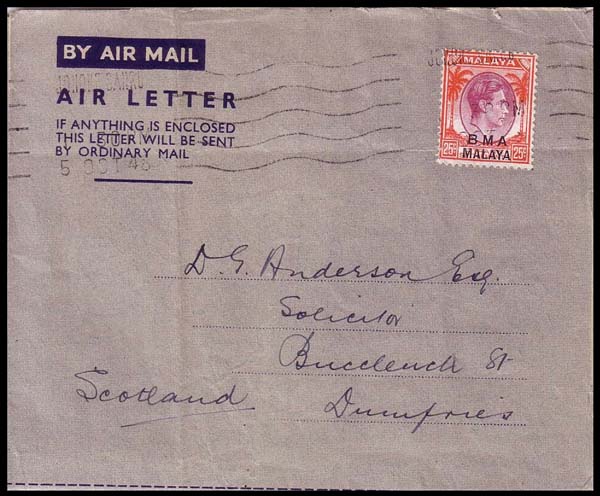 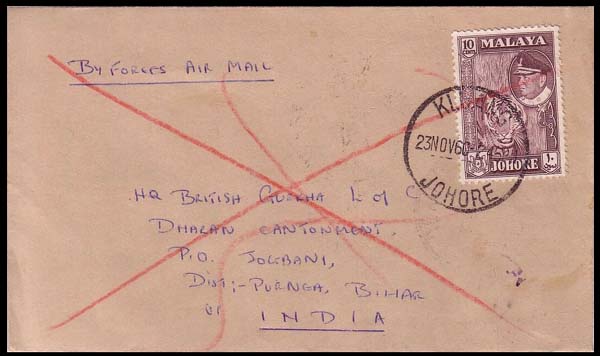 Figure 1. A 1960 cover sent from a Gurkha unit in Kluang, Johore, Malaya, to the British Gurkha headquarters in India. The cover was forwarded to a Gurkha unit in Britain. Click on image to enlarge.
Previous
Next

Sometimes we collectors fall into a rut. The longer we collect, the more difficult filling those spaces becomes. That glorious feeling of having a bunch of new stamps or covers to add to the collection becomes merely a happy memory from the past.

Last year I stumbled onto a new collecting area that has rekindled the excitement and caused me to exercise some collecting muscles that had very nearly atrophied. It has been exhilarating.

It all started with a purchase of a little cover, shown in Figure 1, that was sent in 1960 from a Gurkha unit in Kluang, Johore, Malaya, to the British Gurkha headquarters in India. The address was crossed out, and a label was added to the back of the cover, forwarding it to a Gurkha unit in Britain.

The Gurkhas are superb, highly decorated soldiers from Nepal who are part of the British army.

The princely sum I paid for this gem gleaned from a dealer's dollar box at the Indypex show in Indiana in July 2004 was unquestionably the best buck I ever spent.

Questions immediately ran through my mind, the most pressing of which was "what were the Gurkhas doing in Malaya in 1960?"

When I got home, I ran a Google search on my computer for "Gurkha" and "Malaya," and before long I was reading about a Malayan 12-year civil war from 1948 to 1960 that involved communist insurgents intent on converting Malaya to communism.

Malayan villagers called the insurgents "bandits." The insurgents terrorized villagers to insure their compliance and quickly retreated into the surrounding jungle.

This guerrilla warfare was both terrifying and successful, at least for a while.

Ironically, the Malayan communist terrorists, 90 percent of whom were ethnic Chinese, honed their jungle fighting skills under the direction of the British. During World War II, the British supplied them with arms and munitions to fight the Japanese who had conquered and occupied Malaya.

By the time the Japanese capitulated, the force that was known as the Malayan Peoples Anti-Japanese Army (MPAJA) was a unit of 10,000 well-trained, well-armed and well-organized guerrillas operating from jungle camps throughout Malaya.

At the end of WWII, the MPAJA restyled itself as the Malayan Races Liberation Army (MRLA) and focused terrorist activities against hapless residents of small villages on the fringes of the jungle.

The first attacks by the MRLA occurred during the first week of June 1948. A dozen rubber estates in Perak, Pahang and Johore fell victim to sabotage and murder.

Anyone who resisted was made to watch the torture and murder of their families before they themselves were executed.

The MRLA concentrated its efforts on the rubber plantations and tin mines because both were of strategic military importance.

The air letter shown in Figure 2 was sent from a plantation in Johore Bahru, Johore, to Dumfries, Scotland, in October 1948.

The writer reports: "It's more a police matter than an army one. True, there are bands in the jungle and probably most of the raids are hatched there — but there are few large bands and most of their numbers are living in the squatters' huts. They've got the whole Chinese population scared stiff."

The Malaya police force was coping to the best of its ability, but the counterinsurgent effort needed reinforcement.

Gurkhas were a part of this force. British, New Zealander, Australian, Rhodesian and Fijian soldiers were also brought to Malaya to augment the Malayan regiments, police force and home guards.

The primary task of the military forces was to assist the government in restoring law and order. During the peak of the emergency, 250,000 military personnel were serving in Malaya.

Military personnel far from hearth and home generate a lot of mail.

In Malaya, the security forces had reduced postal rates called "concessionary rates," and they used Malayan stamps on their mail.

To receive the concessionary rates, the letters had to be inscribed "Forces Mail" and bear the sender's name, rank, serial number and address. This makes identifying military mail from the Malaya emergency a little easier.

A letter posted May 21, 1952, to Surrey, England, from a British noncommissioned officer stationed at the British air base at Changi in Singapore is shown in Figure 3.

This is explained by simply looking at the number serving from each contingent. The British were the most numerous.

Director of operations General Briggs developed a controversial yet ultimately successful plan to relocate Chinese plantation workers and squatters to what were called new villages.

Those who were relocated were provided with a house within the village and a piece of property outside the village, which was deeded to them if they stayed.

The villages were actually armed camps that were designed to protect the inhabitants from the insurgents and to cut off supplies to the MRLA. Eventually more than 400 Briggs plan new villages were established, housing a half-million people.

Postal evidence of these Briggs plan villages must surely exist, although I have yet to find anything that can be attributed to them. This is something for me to keep looking for.

As I worked my way through the history of this nearly forgotten war, I was struck by how thoroughly interesting and complicated collecting Malaya can be.

The country has a multicultural population of Malays, Indians, Chinese and British who write and speak dozens of different languages. Letters can be addressed in Malay, Chinese, Tamil, Hindi, English or other languages.

Malaya, formerly Straits Settlements, was made up of federated and nonfederated states, each of which had its own stamps.

Malaya was occupied by Japan in WWII and had occupation stamps inscribed in Japanese. At the end of the war, Malaya came under British Military Administration for a time, and old Straits Settlements stamps overprinted "BMA" were used.

When independence came in 1957, Malaya became independent Malaysia, ending 83 years of primarily British rule. The insurgents continued to attack sporadically for a few more years, but independence knocked the wind out of the sails of the guerrillas and they found they had little real influence or support.

Many of the MRLA fighters were wooed to the other side by large rewards for turning in their fellow insurgents.

The Malay emergency was officially declared over in 1960.

One of the most interesting facts I found out about this civil war is why it was called an "emergency" instead of a war.

That was in deference to the plantations and mines that carried British insurance. Damages suffered in a war were excluded from coverage, but damages inflicted during a civil uprising were covered.

A cover sent Nov. 4, 1954, from the Pacific Tin Consolidated Corp., in Kampar, Perak, to the Sun Life Assurance Society in Glasgow, Scotland, is shown in Figure 5.

All of this proves to me that a single cover and a pinch of curiosity can be the inspiration piece for a completely new collection.