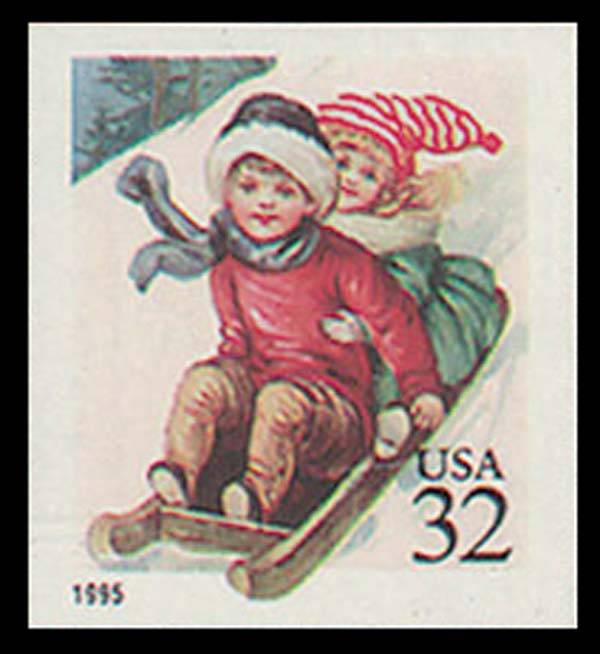 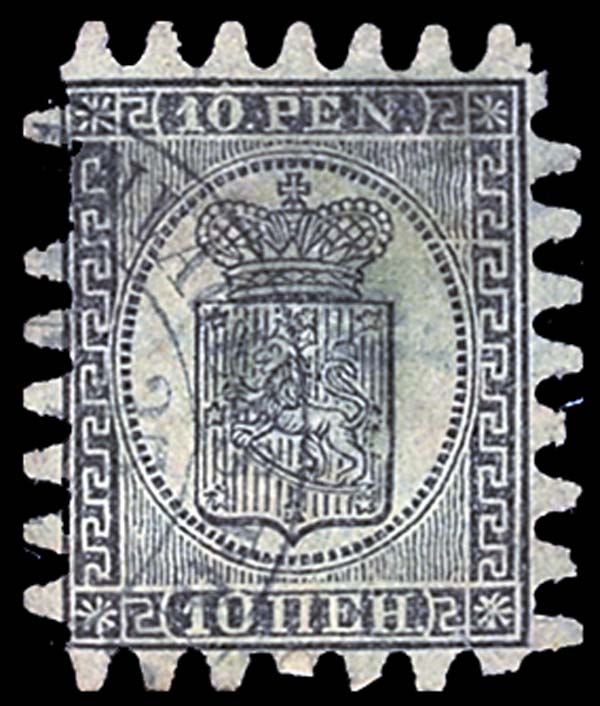 Figure 8. A Finnish 10-pennia black on buff paper Coat of Arms stamp with serpentine rouletting. Click on image to enlarge. 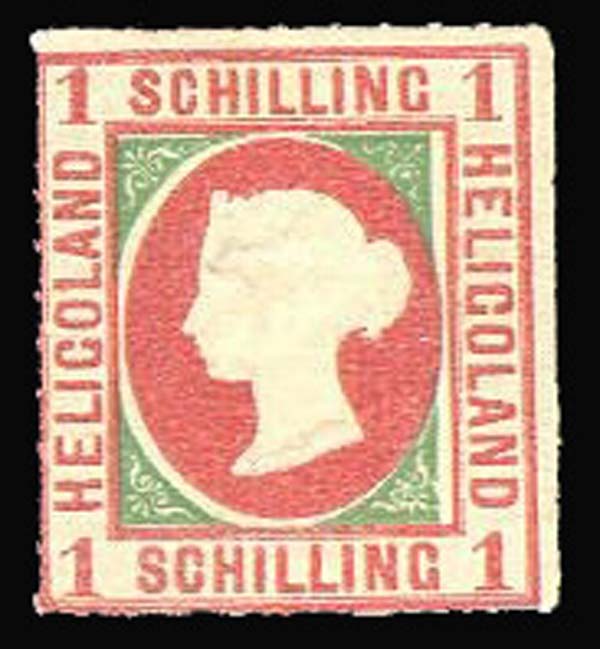 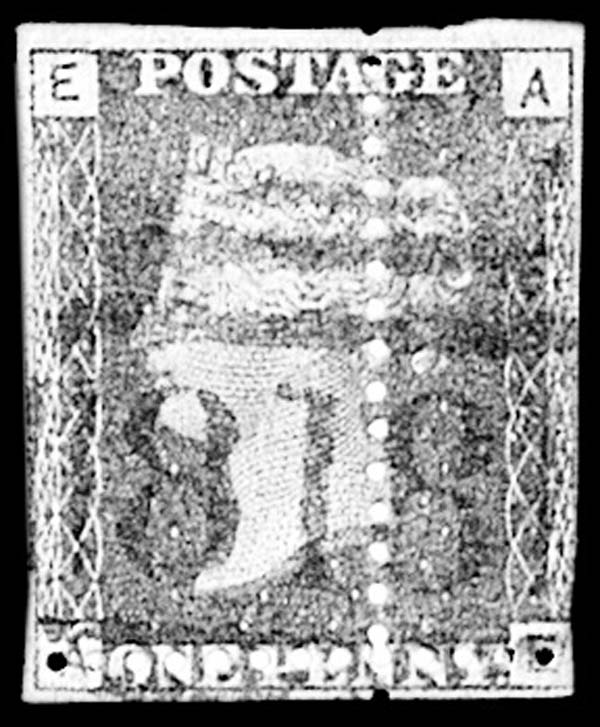 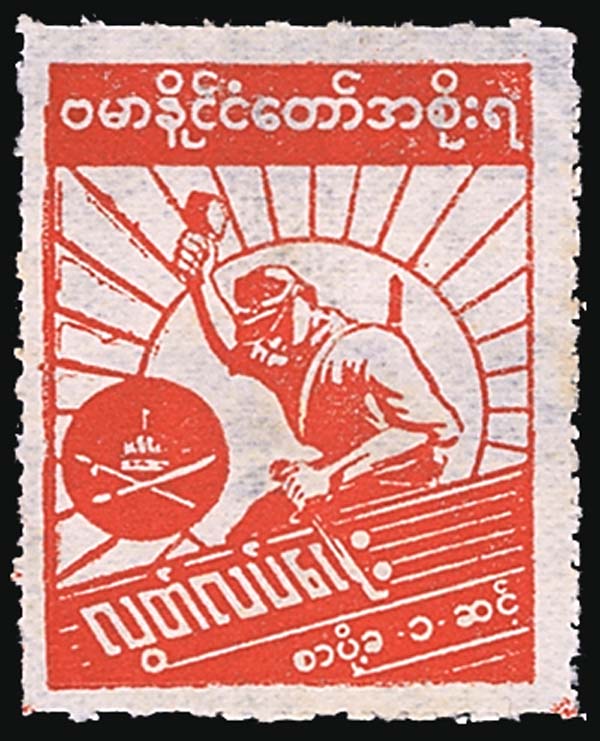 Figure 4. A Japanese occupation of Burma stamp with hyphen-hole perforations. Click on image to enlarge.
Previous
Next

With few notable exceptions, such as the early stamps of Portuguese India that were handstamped from a single die, most stamps are printed as multiples. They might be printed in sheets as small as six or 12 stamps or as large as 400.

One of the defining characteristics of stamps is their separations. Separations are a manufactured characteristic that allows stamps to be removed from a sheet or pane.

The first stamps were printed without any ready-made method of separation. To be used, stamps had to be cut or torn from sheets or panes.

Stamp collectors call such stamps "imperforate," a word that is really a back-formation from the time after which most stamps began to be perforated.

An imperforate strip of three Indian 4-anna red and blue Queen Victoria stamps (Scott 6) is shown in Figure 1. Note that there are no manufactured means of separation between the three stamps.

This strip of three stamps was cut from the lower-left corner of a sheet of 24 stamps, probably with scissors.

Some countries, notably France and French colonies, Hungary and Latvia, have had policies of issuing stamps of the same design in two formats: both with a means of separation and imperforate.

Perforations were the first type of separations to be generally adopted for use on postage stamps.

Henry Archer patented a perforating machine in 1850 in England, and British postage stamps began to be issued with perforations in 1855, although some had been experimentally perforated or rouletted earlier.

Perforations are applied by perforating machines that use pins pushed into counterpart dies to punch out small bits of paper. The stamps can then be torn apart along the lines of perforations.

How neatly and easily the stamps can be separated from each other can be affected by several factors, including the gauge of the perforation (how close together or how far apart the perforation holes are) and the type of paper being used.

If the perforation holes are too far apart, the stamps do not separate from each other easily and can be torn. If the holes are too close together, the stamp panes can separate and fall apart after being handled a bit.

One of the ways that stamp collectors identify and classify stamps is by the gauge of the perforations.

Most perforated stamps have been issued with perforations that gauge between 8 and 16.

Stamps with perforations that gauge differently at the top and bottom from those at the sides are said to have "compound perforations."

A number of different styles and types of perforation gauges (tools) are available for measuring the perforations of stamps. The gauge of a stamp's perforations can have a big effect on how much it is worth. For example, a United States 5¢ blue George Washington stamp with compound perforations gauging 12 by 10 (Scott 423C) is shown at the left in Figure 3.

When collecting multiples of perforated stamps, such as plate number blocks, cross-gutter pairs or the U.S. 2¢ Battle of White Plains souvenir sheet (Scott 630), the condition of the perforations is key to the multiple's value.

Sometimes very badly misperforated stamps have some value as freaks to collectors of errors, freaks and oddities.

Shown in Figure 5 is an oddity from a misperforated sheet of Great Britain 1d Queen Victoria stamps (Scott 33). The sheet's perforations were so badly aligned with the stamp designs that whoever used the stamp ignored the perforations and cut around the design with scissors. There is one line of perforations to the right of center and another along the bottom through the denomination. Had the stamps been torn apart along the perforations, each would have included images from four different stamps.

Until fairly recently, perforations were the preferred method of separation for the great majority of postage stamps issued. People are so used to seeing perforations on postage stamps that stamps with other types of separation are sometimes designed to mimic perforations. For example, the imperforate Lithuanian 15-kopek dull green and black Vytis the White Knight stamp (Scott 385) shown in Figure 6 has simulated perforations printed as part of the design.

Rouletting is another type of separation. Experimental rouletted stamps actually preceded stamps with perforations, but rouletting has been used much less frequently than perforating.

In rouletting, machines with sharp notched bars or toothed disks cut slits in the paper between the stamps. Rouletting differs from perforating in that perforating actually removes small bits of paper (the perforation holes) from between the stamps, while rouletting cuts the paper between stamps at intermittent intervals without actually removing any of it.

Straightline rouletting is the norm, but different types of roulettes can be made by setting the rouletting bars or disks in different patterns.

Serpentine rouletting is made by a machine with curved cutting blades faced in alternating opposition so that the undulating roulette pattern resembles a slithering snake. A Finnish 10-pennia black on buff paper Coat of Arms stamp with serpentine roulettes is shown in Figure 8. The stamp has a tooth missing.

In recent years, the proliferation of U.S. self-adhesive stamps has essentially replaced the old standby perforations with a new type of separation called die cutting.

Self-adhesive stamps are manufactured on release paper, so they no longer have to be attached to each other to keep the pane together until the stamps are ready for use. Each die-cut stamp is already separated from adjoining stamps and selvage. It just has to be peeled from the release paper to be used.

Die cuts need not be made in a straightline. The dies can be placed in a serpentine pattern to produce a serpentine die cut that looks similar to serpentine rouletting.

Even more imaginative use of die cuts can be used to cut stamps in odd or irregular shapes or even to cut to the shape of a stamp design.