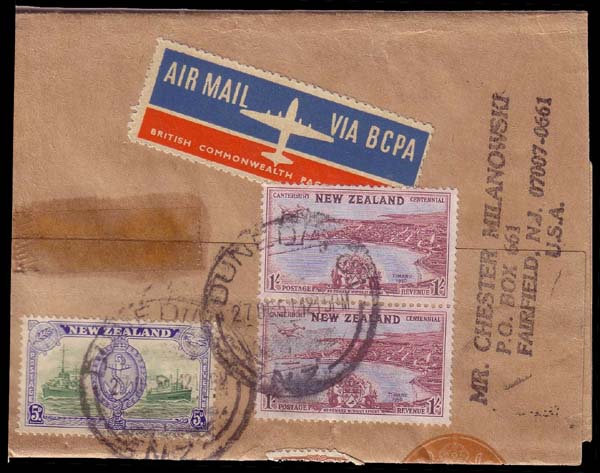 Figure 6. The back of the wrapper shown in Figure 5 showing additional stamps that uprated the wrapper to 2 shillings, 6 pence, paying the airmail rate. 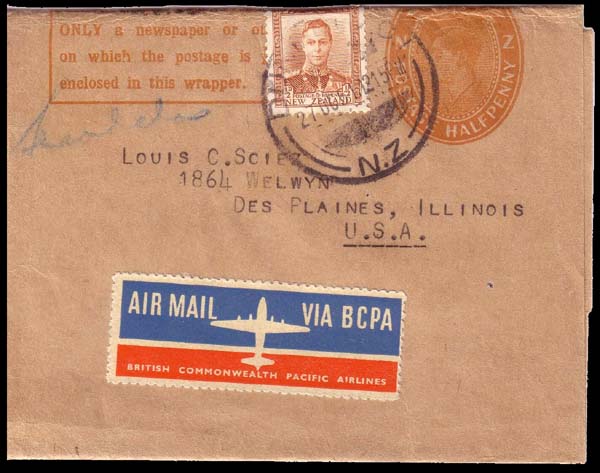 Figure 5. The front of a wrapper that was mailed to the United States by airmail from Dunedin, New Zealand. 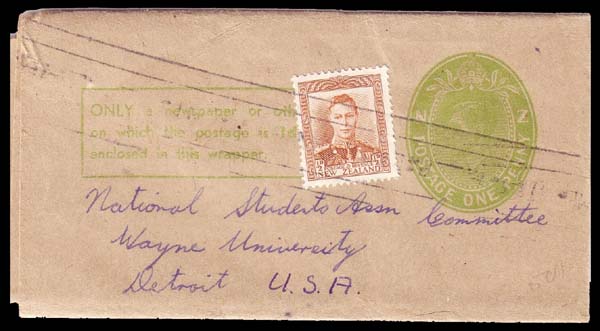 Figure 4. A 1d green King George VI wrapper uprated with a ½d stamp to pay postage to the United States by surface mail. 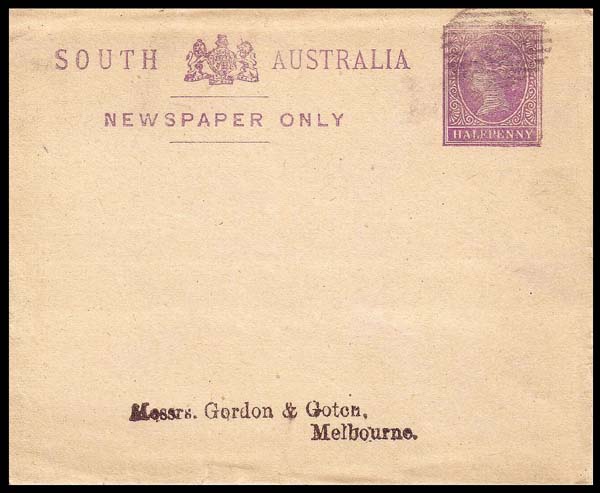 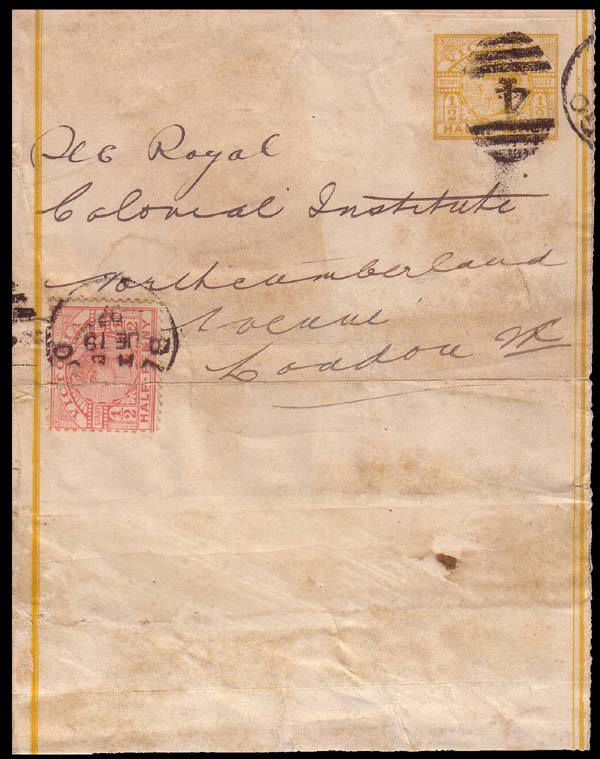 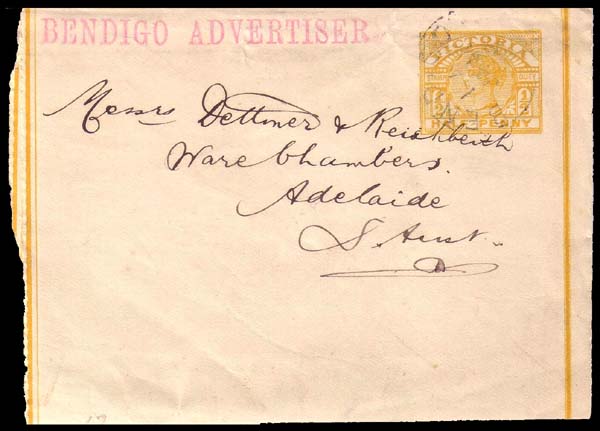 There are other limbs on the tree of philately besides postage stamps. One of the limbs is postal stationery.

The postal stationery limb has many branches that include post office issued items such as postal cards, envelopes, aerograms, registered envelopes and letter cards.

Some of these branches are more popular than others, but each has adherents and each offers collectors fascinating areas of specialization.

Wrappers often have a gummed edge. The sheet is addressed by the sender and wrapped around a folded or rolled newspaper or circular.

The free edge is fastened onto an area of the wrapper that is clear of the address and the stamp.

Wrappers should always be collected intact. In years past, it was the practice of some collectors to cut the imprinted stamp from postal stationery and collect only that printed design. That practice thankfully has fallen out of favor, although older collections often include wrapper cutouts that beginning collectors sometimes mistake for imperforate stamps.

For many decades, collectors have saved the entire piece of stationery, which is called, logically enough, an "entire." Unfortunately, boatloads of postal stationery have suffered the fate of the dreaded scissors. Such items now are curiosities from the past, and they usually are of little interest or value to collectors of today.

Wrappers and other kinds of postal stationery have a lot of similarities to stamps. There are collectible printing varieties, paper types, watermarks, flaws, shades and pre-production material such as proofs and essays.

Wrappers can be collected either mint or used. In some ways, it is easier to collect them mint, although they are fairly large when unfolded.

Used examples are frequently in less than perfect condition. They were sometimes roughly treated in the mailstream. What is worse, the wrappers were often mangled by the recipient who was trying to get to the newspaper it contained.

Collecting used wrappers can be difficult to find because the great majority of them went straight into the rubbish as soon as they were removed from the newspaper.

I like wrappers despite their often homely exteriors. Generally speaking, used wrappers are affordable, and they are challenging.

The United States issued its first wrappers in 1861 using the same stamp design as the postal stationery envelopes of the period. The Scott Specialized Catalogue of United States Stamps and Covers lists envelopes and wrappers together, but it gives envelope catalog numbers the prefix letter "U" and wrapper catalog numbers the prefix letter "W." U.S. wrappers were discontinued in 1934.

My collecting specialty includes those countries that fall within the British Pacific region. Australia and some of the former Australian states issued newspaper wrappers.

Figure 1 shows a wrapper from Victoria. We can tell that this wrapper once embraced an issue of the Bendigo Advertiser. The faint postmark informs us that it was an issue that was published on or about Jan. 14, 1897.

The ½-penny imprinted stamp is identical to the Queen Victoria stamps issued concurrently. The wrapper's stamp is orange, and there are orange border stripes on both sides of the wrapper. This rate covered the cost of mailing a newspaper weighting up to 10 ounces and within Australia.

Figure 2 shows a wrapper uprated for mailing a newspaper posted to an address outside of Australia. It is uprated by the addition of a ½d rose Queen Victoria stamp, and it carried a newspaper to London, England. This wrapper also originated from Bendigo, on June 19, 1897.

South Australia, another British colony in Australia, also issued wrappers. An example that was sent to Melbourne in the colony of Victoria is illustrated in Figure 3. This type of wrapper was issued beginning in 1882, and it is known with and without the period after the word "ONLY" at the top center.

The old Higgins & Gage World Postal Stationery Catalog is widely used by postal stationery collectors, although the listings only go up to about the mid-1970s. Its values are outdated. This multipart catalog is available from the publisher (Classic Philatelics, Box 5637, Huntington Beach, CA 92615), and it is sometimes offered at auction.

Comprehensive catalogs or studies have been published for the postal stationery of some individual countries. To see what is available in your specialty, check the card catalog of the American Philatelic Research Library, online at www.stamplibrary.org.

Many British Commonwealth collectors concentrate on the postal issues released during a particular monarch's reign. Going beyond the reign of Queen Victoria for the first time in this Refresher Course, Figure 4 shows a wrapper issued during the reign of King George VI.

The New Zealand wrapper has a bilious acid-green imprinted stamp. It was uprated with a ½d brown-orange King George VI stamp to pay postage to the United States by surface mail.

What about airmail? Figure 5 shows a wrapper from New Zealand that was sent Oct. 27, 1951, by air from Dunedin. Two airmail etiquettes shows that it went by airmail.

The front shows that the ½d brown-orange King George VI wrapper was supplemented with a ½d stamp.

The back of the wrapper, shown in Figure 6, bears additional stamps that total

2 shillings, 5 pence, for a total franking of 2sh6d to mail the wrapper and its contents to the United States by airmail.

Both of these New Zealand wrappers are printed on thick brown paper. They don't exactly sing of beauty and splendor, but they were extremely functional.

Both bear an instructions box, printed in the same color as the stamp design, that advises "ONLY a newspaper or other matter on which the postage is 1d (or ½d) may be enclosed in this wrapper."

Newspaper wrappers might be unlovely, and they might go unloved by the majority of collectors, but wrappers offer collecting challenges.

To find out more about collecting wrappers and other kinds of postal stationery, contact the United Postal Stationery Society, Box 1792, Norfolk, VA 23501 or visit the society's web site at www.upss.org.