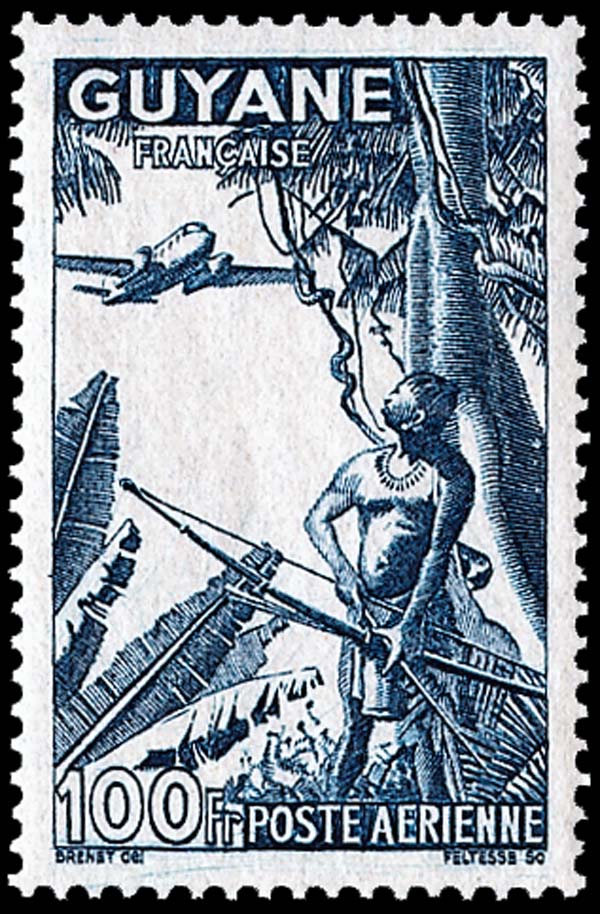 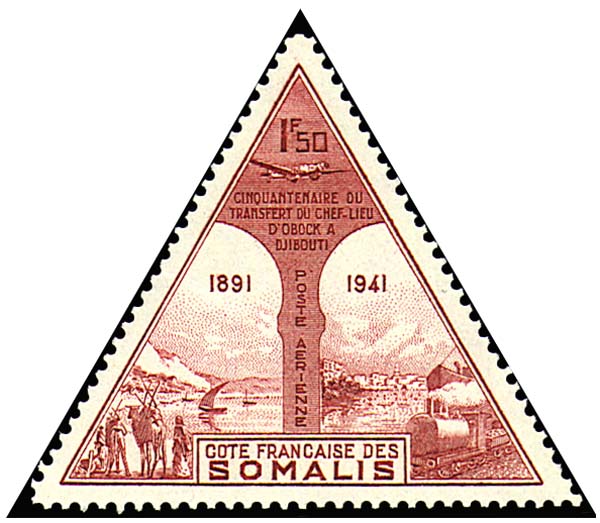 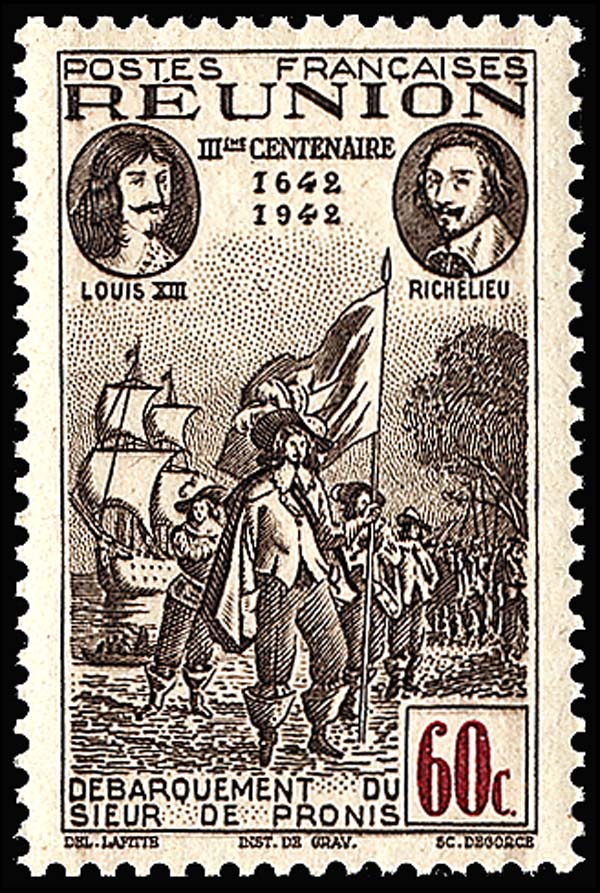 Figure 5. A France-Reunion 60-centime De Pronis Landing on Reunion stamp (Scott 177B), issued in 1943. Click on image to enlarge. 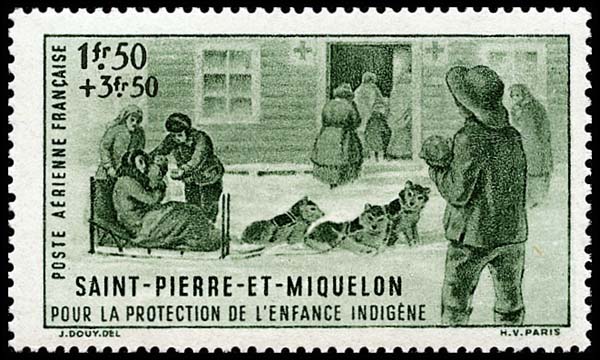 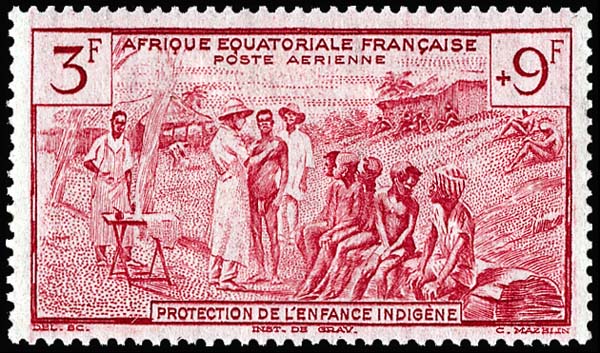 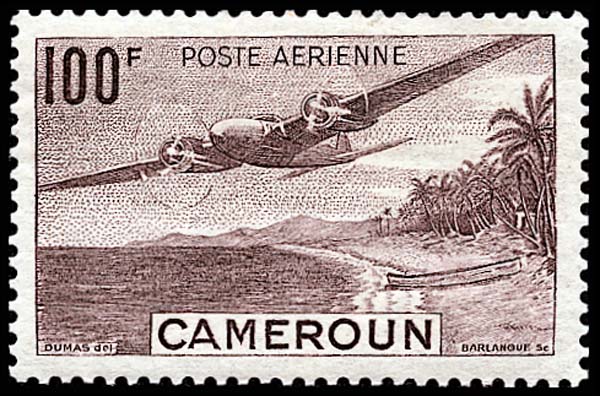 Figure 2. A Cameroon 100fr lilac-brown Plane Over Coast airmail stamp (Scott C7I), issued by the Vichy government in France but not sold in Cameroon. Click on image to enlarge. 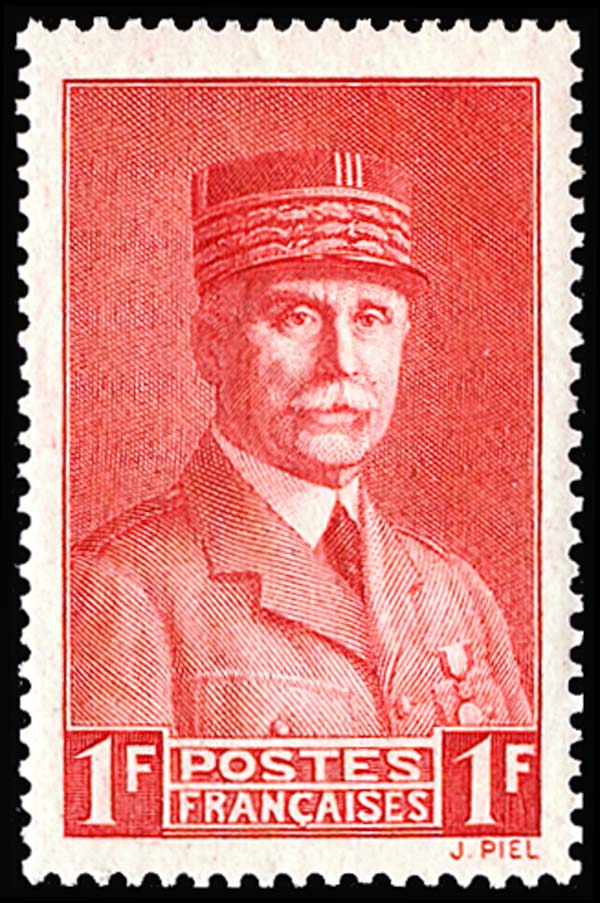 Toward the end of the movie Casablanca, Captain Renault (the French prefect of police played by Claude Rains) reaches for a bottle of Vichy water and pours himself a drink. But he stops, looks at the bottle in disgust, drops it into a rubbish bin and kicks the bin away. The gesture symbolizes his change of allegiance from the collaborationist Vichy French government to the Free French Forces at war with the Nazis.

In the 2004 edition of the Scott Standard Postage Stamp Catalogue, Scott catalog editors symbolically pulled part of Vichy France back out of the rubbish bin of history and put it in the catalog.

In his editor's letter at the beginning of the 2004 edition of Vol. 2 of the Scott standard catalog, Scott catalog editor James E. Kloetzel discussed the rationale for adding these stamps to the listings: "These issues were prepared by the French authorities and were intended to be placed on sale in the colonies when Vichy control was established. Of course, most of the empire remained in Allied hands, and the majority of these stamps, issued during 1942-44, were sold in Paris but never reached the colonies. Because of this, most of these issues have been treated as 'prepared but not issued' items and have not been listed by Scott.

"Over the years, exceptions were made, and some items were listed, while most were not. The Scott editors decided that the best approach would be to list all of these issues, with appropriate explanatory notes."

Vichy France was spawned in the ruins of France's defeat by Nazi Germany in 1940.

Great Britain and France declared war on Germany on Sept. 3, 1939, in answer to Germany's invasion of Poland two days earlier. France did very little in the way of fighting, conducting what has been called the "Sitzkrieg" and the "Phony War" on the Western front, while the Germans and their Soviet partners in crime liquidated Poland.

France's turn came in May 1940, as Hitler shifted his focus to the west. The Germans bypassed the vaunted Maginot Line and swept ruthlessly through the Netherlands and Belgium and across France's unfortified northeastern border. By June 14, the German Army had occupied Paris.

The French government fled Paris ahead of the Germans. French Premier Reynaud advocated evacuating the government to French territories in North Africa to continue the fight, but he was overruled by Vice Premier Henri-Philippe Petain and Gen. Maxime Weygand, the French military commander, who argued for an armistice with the victorious Germans.

After Reynaud resigned, President Lebrun appointed Petain as premier of France. Petain negotiated a separate peace with Hitler and on June 22 signed an armistice.

Under the terms of the armistice, the Germans continued to occupy the three-fifths of France that they had conquered. The remaining southeastern two-fifths of the country was placed under the administration of Petain's government with its capital at Vichy.

Vichy France became a German satellite and was forced to bear the expense of the German occupation.

When Allied forces invaded the Vichy-held territories of Syria, Lebanon, Tunisia and Algeria, Vichy French forces fought their former allies on behalf of their Nazi masters.

Many French soldiers escaped from France and joined the Free French forces led by Charles De Gaulle. Some brave Frenchmen joined the Resistance and continued to fight the Germans at home, but others enthusiastically collaborated with the Nazis, especially in rounding up French Jews for the final solution.

Marshal Petain, president of Vichy France, was the hero of the Battle of Verdun in World War I. The aged hero of the last war, pictured on the 1941 French 1-franc red Marshal Petain stamp (Scott 417), shown in Figure 1, was 83 in 1940 when he surrendered France to Germany.

Petain replaced the French Revolution slogan "Liberty, Equality, Fraternity" with his own slogan "Work, Family, Country." The Milice (the French secret police equivalent to the Gestapo) ruthlessly stamped out dissent and arrested, tortured and executed dissenters and Resistance fighters.

When Petain surrendered to Hitler, all French colonies were at least nominally under the control of the Vichy government. Felix Eboue, the governor general of French Equatorial Africa, was the first colonial governor to declare for De Gaulle and the Free French, on July 16, 1940.

By the autumn of 1940, the colonies of Chad, Cameroon, French Congo, French Equatorial Africa, French India, French Polynesia and Oubangi-Chari had all joined the Free French cause.

These colonies' defections notwithstanding, Vichy postal authorities continued to issue postage, semipostal, airmail, airmail semipostal and postage due stamps for some of them well into 1944, hoping that the fortunes of war would return the colonies to Vichy control.

The Cameroon 100fr lilac-brown Plane Over Coast airmail stamp (Scott C7I) shown in Figure 2 was issued in 1943 or 1944, three to four years after Vichy lost control of the colony. The note following the Scott listing says, "Nos. C7A to C7I were issued by the Vichy Government in France, but they were not placed on sale in Cameroun."

The Vichy colonial governments were as authoritarian and antidemocratic as the parent government in France. The majority of the population was often in sympathy with Free France.

Where the Vichy governors remained in power, they did so through the same ruthless police state methods employed in unoccupied France.

In November 1940, Gabon became the first Vichy-controlled colony to be liberated by Allied (primarily Free French) forces. Syria and Lebanon were liberated in June-July 1941 and were established as independent countries before the end of the war.

French colonies in the Pacific liberated from Vichy in 1942 included New Caledonia, Wallis and Futuna Islands, and Reunion.

That didn't keep Vichy France in 1943 from issuing a 12 stamp set (France-Reunion Scott 177B-77G and C13A-C13F) marking the 300th anniversary of the French settlement on Reunion. The 60-centime black-brown and red De Pronis Landing on Reunion stamp (177B) from the set is shown in Figure 5.

In November 1942, Madagascar was liberated by the British and Allied forces that landed in Algeria, Tunisia and French Morocco in North Africa, and the remaining colonies of French West Africa changed allegiance.

The war surged back and forth across North Africa, leaving it firmly in Allied hands by May 1943.

On Nov. 11, 1942, the German and Italian military occupied Vichy France in response to the Allied invasion of North Africa. The Vichy administration continued to collaborate with the Axis powers in the civil administration of what was no longer unoccupied France.

In the Horn of Africa, French Somali Coast was liberated Dec. 28, 1942 by Free French forces. Nonetheless, Vichy was not dissuaded from issuing the Somali Coast 1.50fr red-brown airmail stamp (Scott C7A), shown in Figure 6, on June 21, 1943, to celebrate the anniversary of the transfer of the capital of the colony from Obock to Djibouti.

Vichy saw its last colonies slip away in 1943.

On March 16, 1943, French Guiana in northern South America declared for the Free French. The French Guiana 100fr dark blue Native and Airplane airmail stamp (Scott C8C) shown in Figure 7 might have been issued before the colony switched allegiance, but it was never delivered to the colony for sale.

On Bastille Day, July 14, 1943, Martinique and Guadeloupe joined the cause of Free France.

A Martinique 30c violet-brown Tropical Fruit postage due stamp (Scott J36D) issued in France in 1943 is shown in Figure 8.

One French colony where neither Vichy nor Free France had much success was Indochina. On Aug. 30, 1940, Vichy was forced to sign an agreement with Japan allowing Japanese troops to operate there.

In January 1941, Thailand invaded Laos and Cambodia with Japanese backing. Also in 1941, Communist and nationalist guerrillas in Vietnam under the leadership of Ho Chi Minh began fighting the Japanese and Vichy French.

On March 9, 1945, Japan seized the remainder of Indochina outright.

After D-Day, Petain fled to Switzerland. Returning to France in April 1945, he was tried for treason, found guilty and sentenced to death. In deference to his WWI service, the charge was commuted to life in prison. He died in prison in 1951.

Laval was tried, convicted and executed in October 1945.

My thanks to Linn's reader Edric Clarke for suggesting the topic of this Refresher Course column.