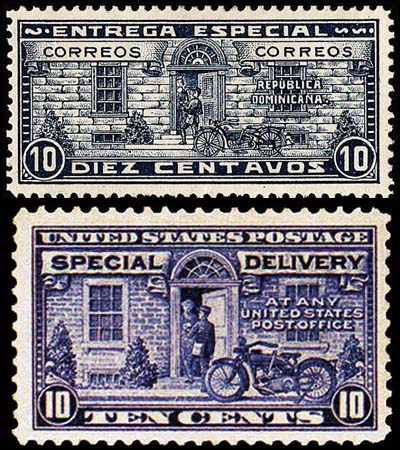 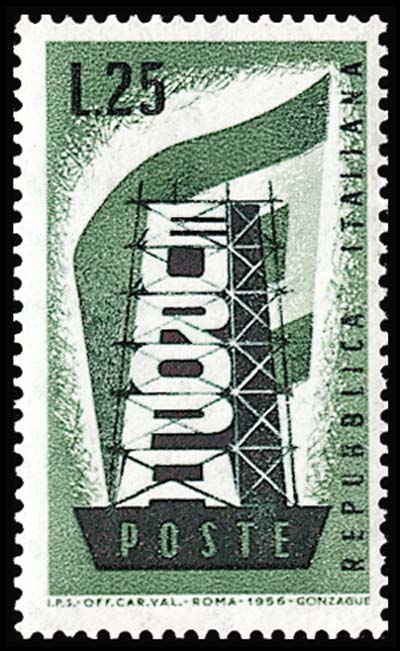 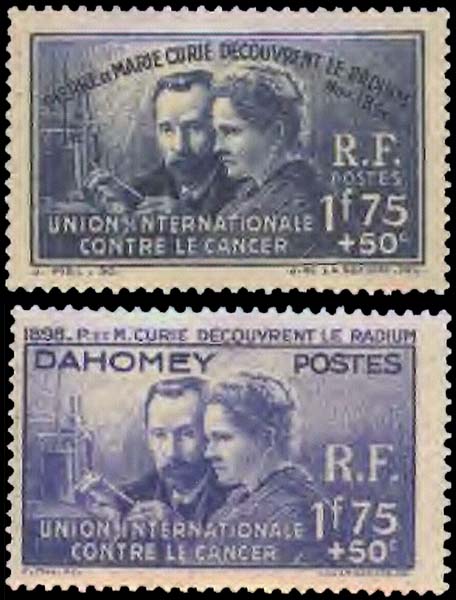 Figure 5. Two 1.75-franc+50-centime Pierre and Marie Curie semipostal stamps, one from France (Scott B76) and one from Dahomey (B2). Click on image to enlarge. 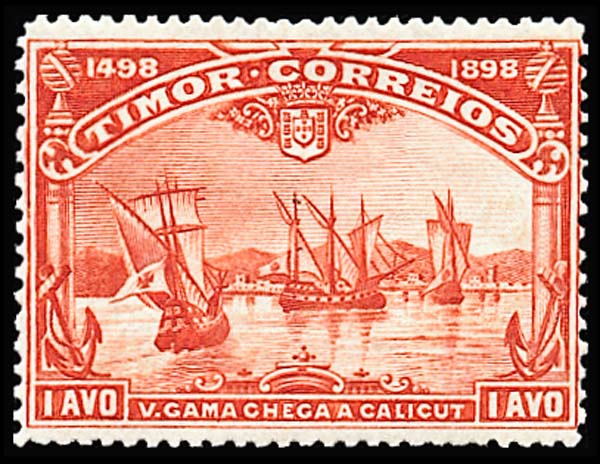 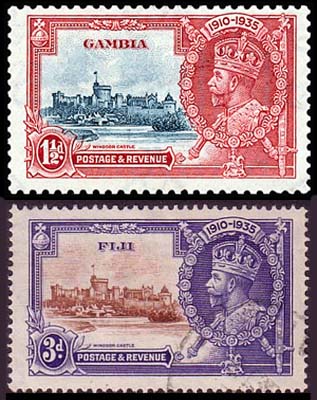 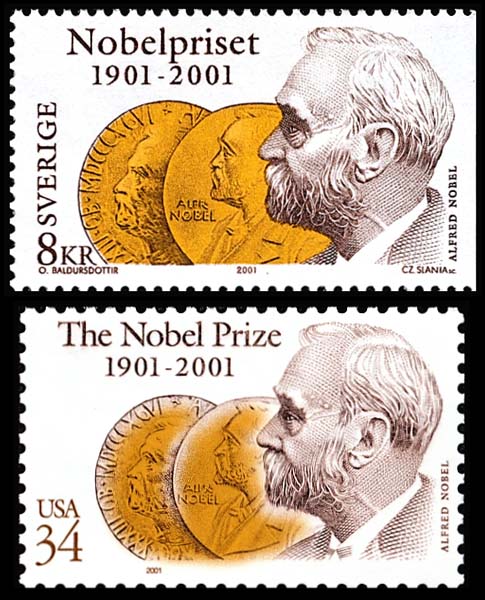 Figure 1. A Swedish 8-krona stamp (Scott 2415) and a 34¢ United States stamp (3504), a joint issue for the centenary of the Nobel Prize. Click on image to enlarge.
Previous
Next

Stamp twins are stamps issued by different postal administrations that have the same or similar designs. There are several different kinds of stamp twins.

Most stamp collectors are probably familiar with joint issues — stamps that often have a common design and are issued jointly by two or more countries. Modern joint issues usually commemorate people or events that the issuing countries have in common.

The stamps were issued in 2001 to commemorate the centenary of the Nobel Prize. The stamps share a common design showing Alfred Nobel and Nobel Prize medals.

This type of joint issue helps demonstrate commonality between nations. I like to think that, in a small way, these stamps help foster world peace, but that is probably an idealistic notion.

Joint issues are not a new idea. They date to the 19th century when many British colonies used a common design featuring a portrait of Queen Victoria.

Keytypes were an economical way for small colonies to have their own quality stamps.

France, Portugal, and Spain also used the keytype method to create stamps for some of their colonies.

Some joint issues are called "omnibus" stamps, a term that is used primarily throughout the British Commonwealth to describe stamps of a common design issued by a group of countries to commemorate the same topic.

The British Commonwealth's first omnibus issue came in 1935 and celebrated the silver jubilee of King George V. A common design of four values was issued by 44 nations and colonies.

Each horizontal stamp features an ornate frame with the king's portrait in an oval on the right and a vignette of Windsor Castle.

Since 1935 the British Commonwealth has issued many omnibus issues. Most commemorate royal events such as weddings, coronations, birthdays and anniversaries. Other notable commemorations include the centenary of the Red Cross, the Peace issue to mark the end of World War II and Shakespeare's 400th birth anniversary.

Portugal and its colonies issued eight-stamp sets using common designs in 1898 to commemorate the 400th anniversary of Vasco da Gama's discovery of the route to India. A Timorese 1-avo red Fleet Arriving at Calicut stamp (Scott 46) is shown in Figure 4.

France and its colonies have also participated in a number of omnibus issues, including an important 1938 semi-postal that honored Pierre and Marie Curie's discovery of radium. Twenty-three French colonies participated in this issue that raised money for the International Union for the Control of Cancer.

Two 1.75-franc+50-centime semipostal stamps from the issue, one from France (Scott B76) and one from Dahomey (B2), are shown in Figure 5.

In 1956, six European nations (Belgium, France, Germany, Italy, Luxembourg and the Netherlands) each issued a set of stamps to symbolize European cooperation.

This set is considered to be the first Europa joint issue, although it was not called that at the time of issue. Figure 6 shows an Italian 25-lira Rebuilding Europe stamp (Scott 715) from the issue.

Common-design Europa stamps were issued annually from 1958 through 1973.

After 1973, an increasing number of European countries issued Europa stamps, but the stamps did not necessarily share common designs and the issuers were not necessarily part of what was called the Common Market.

The stamp twins noted so far were deliberately released as common designs by the issuing nations. Other stamp twins have very similar designs but were not intended as joint or omnibus issues.

It has been said that imitation is the sincerest form of flattery. Sometimes a postal authority will base a stamp design on the design of a stamp of another country. These emulators, as I call them, are fun to look for and are often surprising when you find them.

The four corner ornaments are exactly the same. The design of the numerals is nearly identical. The one key change on the New South Wales stamp is the removal of the two shields containing "U" and "S" from the sides of the large central oval. In their place are a kangaroo on the left and an emu on the right.

The former colonies of Queensland, New South Wales, Victoria, Tasmania, South Australia and Western Australia federated in 1901, but the individual state postage stamps remained in use until 1913, when the famous Kangaroo and Map stamps were issued for Australia.

Postage due stamps predated postage stamps in Australia by 11 years.

Sometimes only some stamp design elements are copied and used by another country. In 1930, Spain issued several stamps showing Columbus' vessel the Santa Maria.

The attractive and unusual stern view of the ship showed up 30 years later (minus the Spanish flag) on a three-stamp set of St. Lucia. Figure 9 shows the 2-centavo Spanish stamp (Scott 419) and the 8¢ St. Lucian stamp (173).

It is clear that good design grabs attention and admiration, but I have to wonder how it would even occur to those responsible for stamp designs to snatch previously used ideas, rework them and create a new stamp. Did postal officials go to stamp printers and tell them "we want a stamp just like this one"?

Evidently they did. An example is stated in correspondence received in 1896 by stamp printers Thomas De La Rue and Sons, London. The postmaster general of the Kingdom of Tonga wrote to De La Rue: "I have also to request that you will execute the stamps in the same style of perfection as the North Borneo. I . . . trust that no effort will be spared to make the issue equal to those of North Borneo."

The North Borneo stamps mentioned in the instruction were indeed spectacular examples of the art of engraving. The bicolor stamps stand out even today.

De La Rue set about preparing the designs and plates, but a competitor named Waterlow and Sons eventually was chosen to print the Tongan stamps.

Whether you call them joint issues, stamp twins, omnibus, or emulators, once you investigate them you will find there is more to collect than you originally expected. Give it a try.

Scott Standard Postage Stamp Catalogue helps with a listing of common designs in the front of each volume.