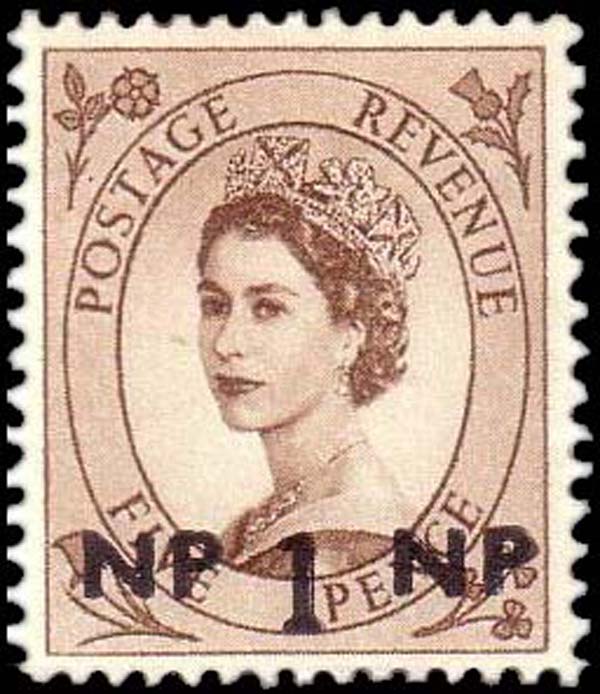 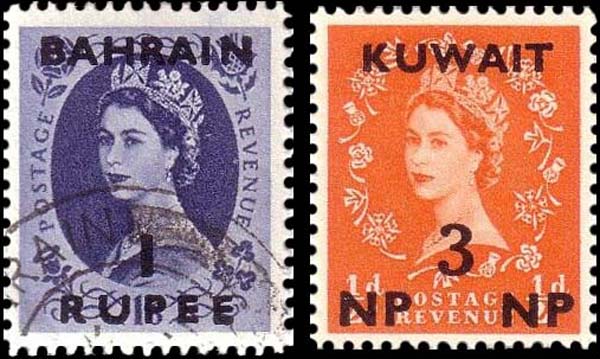 Figure 7. A strip of three Nauru 2d King George V stamps (Scott 4). The middle stamp in the strip is the "NAUP.U" error stamp created by a broken letter "R" in the overprint. Click on image to enlarge. 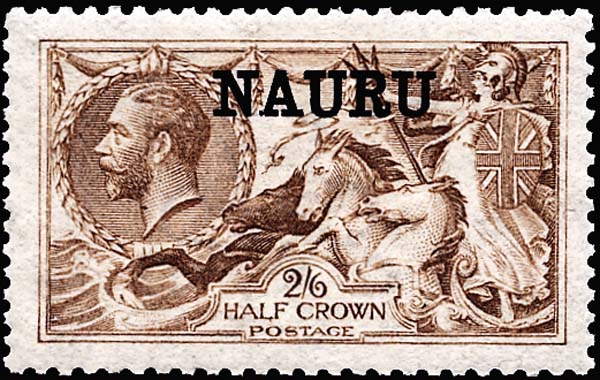 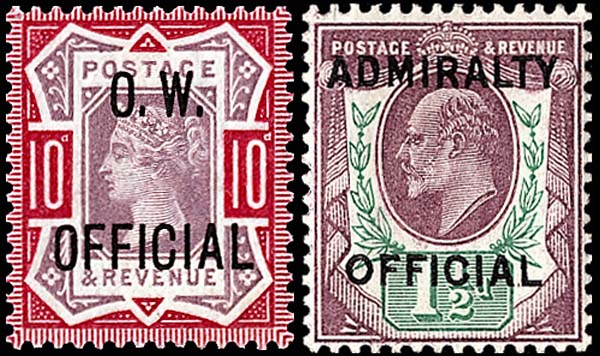 Figure 5. British Official stamps overprinted for the office of works and the admiralty (Scott O47 and O80). Click on image to enlarge. 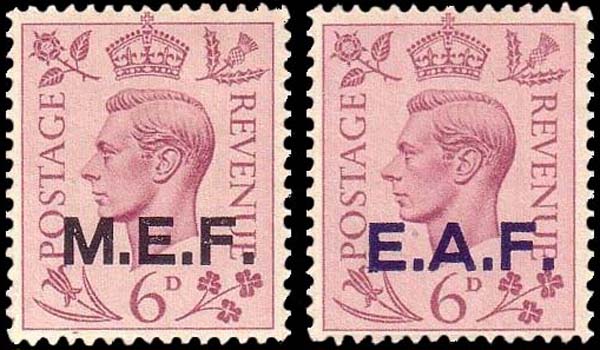 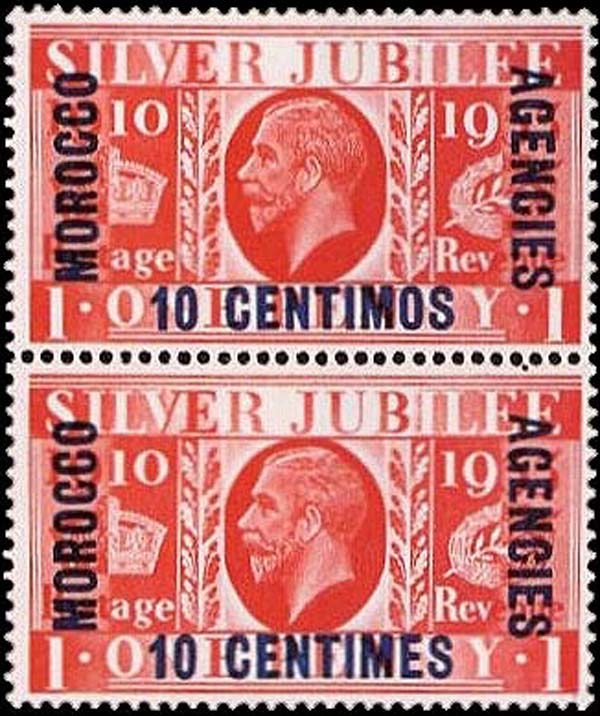 Figure 3. An error pair of British Offices Abroad-Morocco stamps (Scott 68a). Click on image to enlarge.

Figure 2. A pair of 10-centimo-on-1d Edward VIII stamps. The top stamp is the longer overprint variety. Click on image to enlarge. 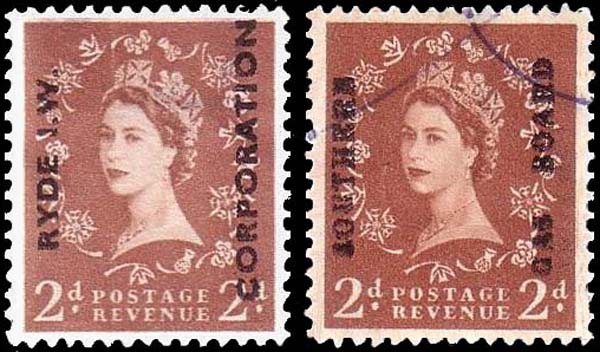 Many of the overprinted stamps were for use in British post offices located in and operating out of foreign countries. These stamps for offices abroad are listed in theScott Standard Postage Stamp Catalogue under Great Britain, immediately following the listing for British stamp booklets.

Arguably the most common overprint a collector is likely to find on British stamps will say "Morocco Agencies."

The Morocco Agencies overprints were made on British stamps beginning in 1907 during the reign of King Edward VII. Britain's interests in Morocco began decades earlier when several European powers established trade or protection agreements with Morocco.

Britain, France, Germany and Spain all set up post offices in various cities throughout Morocco. Great Britain's Morocco postal presence began in 1857 with British stamps without overprints being used. Later British post offices in Morocco used stamps of Gibraltar overprinted "Morocco Agencies." The overprinted British stamps in British currency issued in 1907 were intended primarily for use on parcels.

Overprinted British Offices Abroad-Morocco King Edward VIII stamps denominated in all three currencies are shown in Figure 1. From left to right, they are a 1-penny crimson stamp (Scott 144), a 5-centime-on-½d dark green stamp (437) and a 15-centimo-on-1½d red-brown stamp (80). All of these overprints and surcharges provide a challenge for collectors.

There are lots of varieties, some of which are easy and inexpensive to acquire while others are scarce and pricey.

For example, in 1936 the King Edward VIII stamps were overprinted with "Morocco" printed up the left side and "Agencies" down the right side of the stamp. Some late printings in 1937 contained variations in the length of the word "Morocco" in the overprint.

For a majority of the stamps on each sheet, the overprint measures 14½ millimeters, while a smaller number of overprints measure slightly longer at 15½mm.

This variety occurs on stamps denominated in British, Spanish and French currencies. Shown in Figure 2 is a vertical pair of 10-centimo-on-1d Edward VIII stamps (Scott 79) in which the top stamp has the longer "Morocco" overprint and the bottom stamp is the variety with the shorter overprint.

These varieties are not difficult to find, and the stamps with the longer "Morocco" overprint are worth only a small premium over the shorter version.

This variety is something that you might find in your present stamp collection, and it is worth seeking if only to experience the thrill of the hunt.

Ease of acquisition is not the case with the pair of stamps shown in Figure 3. The 1935 King George V Silver Jubilee issue was overprinted and surcharged in both Spanish and French currencies.

The Spanish currency 10-centimo-on-1d stamp (Scott 68) was printed with one position in the sheet reading "10 Centimes" (French currency) rather than the correct "10 Centimos" (Spanish currency). The Scott standard catalog values an unused pair (68a) with one normal stamp and one error stamp at $1,400. The scarcity of this error has resulted in forgeries.

Tangier, Morocco, is located on the Atlantic side of the Straits of Gibraltar on the north coast of Africa. The convention of 1923 made Tangier an international city governed by a body of foreign representatives. The city reverted to the Kingdom of Morocco at the kingdom's independence in 1956.

British stamps, quite similar in appearance to the Morocco Agencies overprints, were overprinted and issued three years later in 1927. British stamps for Tangier are listed in the Scott standard catalog as British Offices Abroad-Morocco, Scott 501-611.

Like those from Morocco, the "Tangier" overprints have a number of collectible varieties, some common and some not.

Also listed in the Offices Abroad section are Offices in Africa stamps overprinted for use by British military personnel serving with the Middle East Forces and with East Africa Forces.

A far more thorough discussion of the overprinted British stamps can be found in the unpublished Overprints on British Stamps for Use Abroad by Tom Current, which is available for loan from the American Philatelic Research Library, 100 Match Factory Place, Bellefonte, PA 16823 or through the web site at www.stamplibrary.org.

British postage stamps were also overprinted for official use by various government agencies.

The Inland Revenue, the British equivalent of the U.S. Internal Revenue Service, used stamps overprinted "I.R. Official" from 1882 to 1904. Stamps were also overprinted for use by the office of works, the army, the royal household, the board of education and the admiralty.

Several countries used British stamps overprinted with the country name. Stamps for Cyprus in the Mediterranean, Nauru in the South Pacific (Figure 6), and stamps for countries in Asia and Africa were created by overprinting and sometimes surcharging British stamps.

The first "Nauru" overprints contain a constant error "NAUP.U." The error occurred as a result of a broken letter "R" in the overprint. A strip of three Nauru 2d orange King George V stamps (Scott 4) with the error stamp in the middle is shown in Figure 7.

There is also a variety in which the overprint was applied twice, once with ink and once without so that an albino ghost is impressed into the stamp along with the inked overprint. It is worth looking for this variety because it is not always obvious. You could get lucky and find one among the stamps already in your own collection.

Some of the smaller places within the new British Postal Agencies in Eastern Arabia used British stamps surcharged in local currency with no country name. These stamps were used in Muscat, Dubai, Qatar and Abu Dhabi until such time as they issued their own postage stamps. The Scott standard catalog lists these stamps under "Oman." An Eastern Arabian 1-naye-paise-on-5d Queen Elizabeth II stamp (Scott 79) is shown in Figure 9.

Offices abroad, military occupations, and the changing status of countries are not the only reasons why British stamps received overprints or surcharges.

Security overprints, designed to prevent pilferage, are very similar in function to perfins (perforated initials or insignia). Businesses and utilities overprinted stamps that they used for paying receipt and other taxes. Once overprinted, the stamps were no longer valid for postage. Two British 2d Queen Elizabeth II stamps with security overprints are shown in Figure 10.