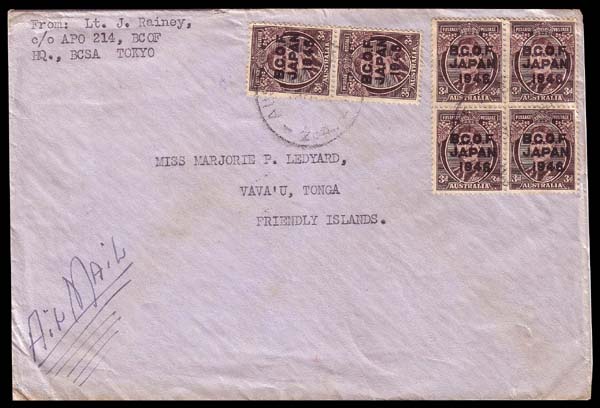 Figure 4. This cover from an Australian officer serving in occupied Japan was mailed to Tonga, an unusual destination in the Pacific. The recipient was a well-known author. Click on image to enlarge. 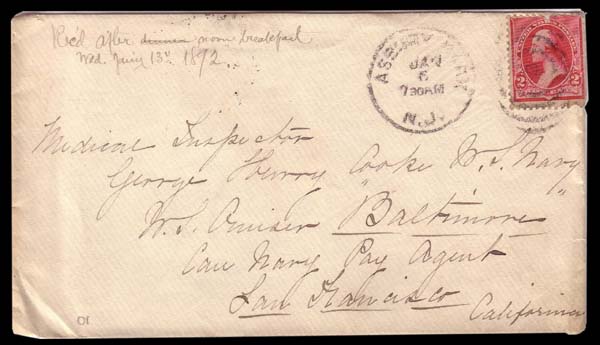 Figure 3. A cover mailed Jan. 6, 1892, to George Henry Cooke aboard the USS Baltimore. Cooke served in the Civil War, was a Navy medical director and left an early report of the giant stone heads found on Easter Island. Click on image to enlarge. 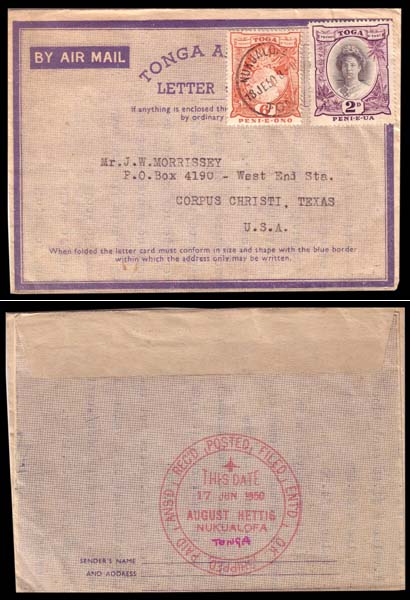 Figure 2. This airletter was mailed June 18, 1950, from Tonga by photographer and stamp dealer August Hettig. Hettig took the picture of Queen Salote that was used as the basis for the design of the 2-penny stamp that franks the airletter. Click on image

Figure 1. This Tahitian cover was mailed in the 1920s from Carl Spaatz to his father, Charles Spatz. Carl Spaatz would later rise to become head of the United States Air Force. Click on image to enlarge.
Previous
Next

My Refresher Course column in the July 18 Linn's elicited a surprising result. That column, about French colonial stamps, illustrated the cover sent in the 1920s from Tahiti to Boyerstown, Pa., shown again in Figure 1.

Shortly after publication, I received a letter from the Boyerstown Area Historical Society expressing an interest in my Tahitian cover. The cover was addressed to a prominent citizen of Boyerstown, "Hon. Charles Spatz," also "Spaatz."

The museum's collections director was reasonably certain that the cover was sent by Spaatz' son, who turned out to be an even more prominent citizen of Boyerstown.

Carl Spaatz, who changed the spelling of his last name by adding an "a" in 1937, was a 1914 graduate of the United States Military Academy at West Point. His first active-duty posting was to Scofield Barracks, Hawaii. In 1916, he became one of the Army's first 26 U.S. pilots, and he served in France during World War I, where he was in charge of the aviation training center in Issoudon.

In the 1920s, Spaatz set many aviation flying records and was awarded the Distinguished Flying Cross.

Spaatz was an official observer in Britain during the 1940 Blitz and the Battle of Britain. After the United States entered the war, Spaatz served as head of the Air Force Combat Command and later commanded the Western Desert Air Force in Africa.

In December 1943, he was appointed commander of the U.S. Air Force in Europe where he was responsible for the aviation aspects of Operation Overlord (the D-Day Normandy invasion).

Spaatz was promoted to general, and in 1946 he succeeded Gen. Hap Arnold as commander of the U.S. Army Air Forces. In 1947, when the U.S. Air Force became a separate branch of the military services, he served as its first commander. Suddenly, my fairly ordinary cover bearing a pretty stamp took on new meaning.

Collectors of postal history (used envelopes and cards) sometimes concentrate so much on the stamp, postmark, destination, rate, route and auxiliary postal markings that they sometimes forget the human interest story that lies in the sender and recipient. Sometimes something important gets missed.

Collectors really are curators of historical documents. Besides telling a postal story, there might be just as compelling a human story hiding in your collection.

This important lesson was reinforced to me a couple of weeks later when Texas postal historian Rex Stever gave me the cover shown front and back in Figure 2. At first glance it looks like a fairly ordinary airletter with added stamps mailed June 18, 1950, from Tonga to Corpus Christi, Texas. When I looked at the back of the airletter, however, an obscure story about Tonga was revealed.

The sender, as noted by the large circular marking on the back, was August Hettig, who by the 1950s was selling Tongan stamps to collectors. Indeed, the sale of stamps was the topic covered in the airletter.

Hettig was the son of a German merchant trader and his Tongan wife. Hettig was born in Tonga in 1896, and by 1915 he was working as a photographer. In fact, he was the only photographer in the Kingdom of Tonga for more than 50 years, and his photographs were published in newspapers and magazines throughout the world.

One of his photographs of the coronation of Tonga's Queen Salote was sent to De La Rue & Sons, London security printers. The printer used the photograph as the basis for the design of the definitive stamps, first issued in 1920, bearing the portrait of the new queen. A late printing of one of the 2-penny Queen Salote stamps franks the airletter, tying the story of Hettig, the photographer, into a neat package.

Later I started thumbing through some covers I had set aside for further investigation someday. What stories were waiting there to be discovered? One cover that caught my eye is shown in Figure 3. It looks pretty ordinary at first glance. It bears a U.S. 2¢ Washington stamp postmarked with a Jan. 6 (1892), Asbury Park, N.J., duplex cancel. The handwritten inscription at the upper left is what intrigued me. "Rec'd after dinner (crossed out) noon breakfast Wed, Jan'y 13th, 1892."

I had always assumed this missive contained something important because it notes not only the date but also the time of receipt. I also figured the recipient had a somewhat late night the evening before, so much so that it left him confused about what meal he was having at noon on the day this letter arrived.

The recipient was "Medical Inspector George Henry Cooke, U.S. Navy." The cover was addressed in care of the Navy pay agent aboard the cruiser USS Baltimore.

There were lots of clues here. I began by searching the Internet for George Henry Cooke.

After just a couple of clicks, I arrived at the Naval Historical Center's web site and was reading about the USS Baltimore.

The pertinent part of its history is that the vessel, launched Oct. 6, 1888, became the flagship of the North Atlantic Squadron May 24, 1890. After cruising in European and Mediterranean waters, the USS Baltimore was sent to Valparaiso, Chile, to protect American citizens during the Chilean revolution. The cruiser returned to Mare Island Navy Yard in Vallejo, Calif., on Jan. 5, 1892, the day before this letter was mailed.

Even though he had been retired for some time, in 1906 he was advanced to the rank of rear admiral based upon his services during the Civil War. He died in 1924.

It is interesting that there is an article written by Cooke available online at www.rongorongo.org/cooke/791.html.

The article is about the giant stone heads on Easter Island, which he saw while on a cruise aboard the USS Mohican in 1886. Cooke was a thorough observer, and he left a detailed record of what he explored. The Smithsonian Institution eventually published this account in Miscellaneous Papers.

I now know a lot more about Cooke, but I am still wondering about his noon breakfast on Jan. 13, 1892.

My current favorite cover is shown in Figure 4. The reason it is my favorite is because it combines an old interest with a new interest.

I have collected stamps and postal history from Tonga for a very long time — more than 30 years. About 10 years ago, I began collecting the stamps and covers sent by the Australian forces who occupied Japan at the end of WWII. Australian stamps overprinted "B.C.O.F." (British Commonwealth Occupation Force) were issued for their use. As you can imagine, most of the stamps were used to send mail back to loved ones or business colleagues in Australia. Finding the stamps properly used on a cover to anywhere but Australia is a rarity.

When I found the cover sent from an Australian officer serving in Japan and mailed to one of the outlying islands in the Kingdom of Tonga, I thought I was hallucinating. Additionally, the addressee is someone of fairly significant fame for those who have any interest in Tonga. The recipient, Marjorie P. Ledyard, is also known as "Patricia Ledyard" and later became Patricia Ledyard Matheson.

Ledyard arrived in Tonga shortly before this letter was mailed to her. In Tonga, she met a physician many years her senior, Dr. Farquhar Matheson. They fell in love and eventually married. He was a Scotsman who lived and worked on the idyllic island of Vava'u. It is quite a romantic story in and of itself, made even more romantic knowing that Matheson was a young American writer and recorded her experiences in many books of personal recollection, such as Friendly Isles — A Tale of Tonga, and Utulei, My Tongan Home.

Patricia Matheson also had an extensive correspondence, with friends and fans throughout the world. She must have been a collector or a pack rat — is there any difference? — because she seems to have saved all the correspondence she received.

A few years ago, much of that correspondence was sold, providing collectors the chance to get letters from all corners of the globe mailed to the exotic destination of Vava'u, Tonga.

Many stories wait to be told by the covers you have in your collection and that you will someday buy.

Be a good curator and make sure that you conserve the human history alongside the postal history.