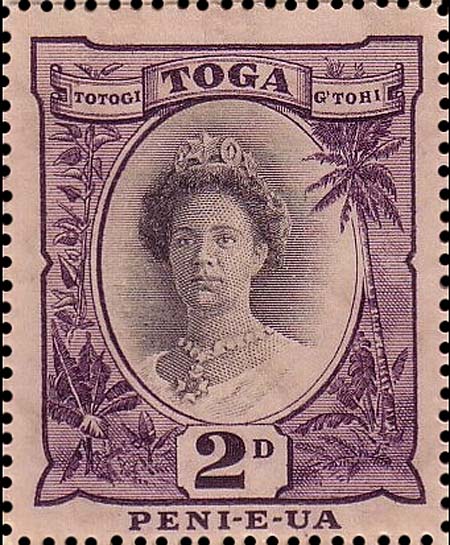 Figure 4. A Tongan 2d Queen Salote die II stamp (Scott 56a) with a larger ball of the numeral "2" and a spur on the "U" in the bottom inscription. Click on image to enlarge. 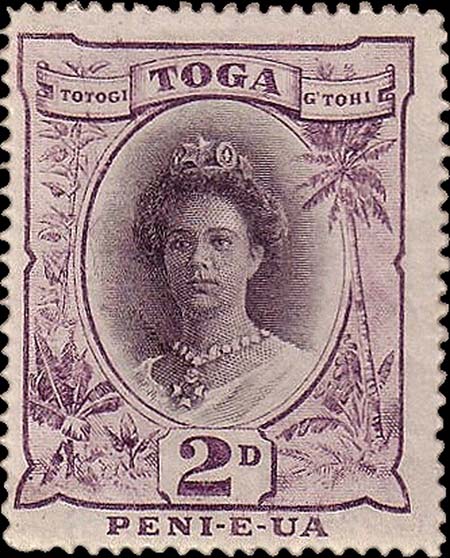 Figure 3. A Tongan 2d Queen Salote die I stamp (Scott 56) with the numeral "2" small ball and no spur on the "U" inthe bottom inscription. Click on image to enlarge. 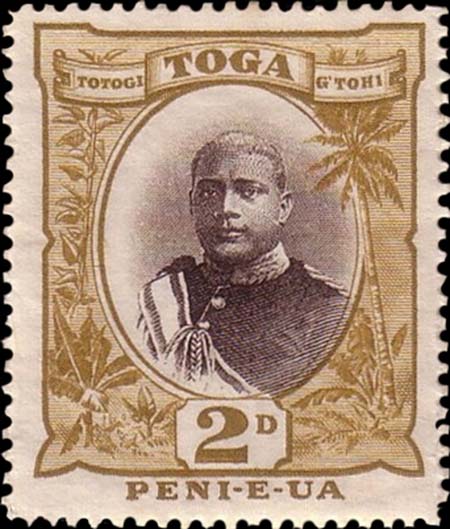 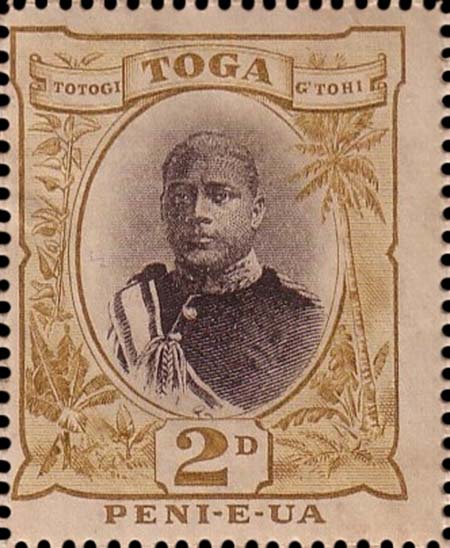 Figure 1. A Tongan 2-penny King George II type I stamp (Scott 41), with the hilt of the king's sword visible at the bottom of the oval frame. Click on image to enlarge.
Previous
Next

When I resumed my childhood stamp collection as an adult, I spent a lot of time toying with the areas in which to specialize.

I would find something that appealed to me and then I would look it up in the appropriate volume of the Scott Standard Postage Stamp Catalogue. Some of my grand plans were economically unfeasible. Others seemed too difficult because of minute differences in the stamps.

Wait a minute — too difficult? What kind of attitude is that?

Difficult stamps are a challenge, but with that challenge comes opportunity.

You can discover something new. You can find a prize lurking in an inexpensive mixture. You can create a great collection.

There is really only one trick that will help you tame the stamp issues that, at first glance, seem to be too intricate to tackle.

Everything that needs to be done to correctly identify the stamps within any series can be broken down into steps. Concentrate on completing one step at a time, and before you know it, you will be taming the beast.

Let's look at a specific example.

Thirty-five years ago I became enamored with a long set of beautifully engraved bicolor stamps issued by Tonga beginning in 1897. I did what I considered to be a smart thing and bought the handbook The 1897 Issue of Tonga by Eric E. Mann.

As I read it, my enthusiasm waned. I thought it was too complicated, but the truth was that I had not put any of my own sweat equity into the project.

At this point, the Scott standard catalog listings became invaluable. I saw that the issue also included stamps issued in the 20th century, Scott 38-69 and 73-81.

That's a lot of stamps.

All the stamps had gauge 14 perforations, so I did not need to use my perforation gauge to identify varieties.

The stamps were produced on paper with two different watermarks, so I sorted the stamps I had by watermark.

In one stockbook, I put the stamps with the multiple tortoise watermark, which the Scott standard catalog incorrectly calls "turtles."

The stamps with multiple crown and script "CA" watermark went into another stockbook so they would not get mixed up as I worked on them.

Next I looked again at the catalog listings and started searching the listed minor number varieties among the stamps I had at hand.

There are two types of the Tongan 2-penny King George II stamps. Type I (Scott 41), shown in Figure 1, has the tip of the hilt of the king's sword visible at the bottom of the vignette within the oval of the frame. Type II (41a), shown in Figure 2, lacks the sword hilt.

Because the Scott standard catalog does not illustrate these types, the specialized handbook, which does, comes in handy.

I read the section of the specialized handbook about the 2d varieties and saw the illustrations. Then I began looking for them among my stamps.

Bingo! I found several examples of each and was very proud of myself. I was learning.

Like Scarlett O'Hara, I decided to think about them later.

I had many examples of this 2d stamp, so I started looking at each numeral "2" in every stamp. Eventually I figured out that the smaller ball in the "2" referred to the round ornament at the top end of the numeral. And guess what? I found that I had examples of them as well.

I was on a roll and becoming much more confident in my abilities. As I continued to read the specialized handbook, it started making sense.

Every difficult series can be properly identified and then studied in more detail in just this way.

One of the best instructions for step-by-step identification is the Micarelli Identification Guide to U.S. Stamps by Charles Micarelli, published by Scott Publishing Co.

Subscribers to Linn's Stamp News receive a discount when they purchase this essential book through the Amos Advantage program.

The guide breaks identifying the stamps of the United States Washington-Franklin regular issues down into achievable steps, with each step described in language a beginner can understand. Figure 5 shows various stamps in the 1908 issue.

The guide walks you through the differences between offset printing and engraved printing and how to determine if the plate used to print the stamps was rotary (curved) or flat.

Further steps complete the identification: measure the gauge of the perforations, check for the Scott-listed types in the Scott Specialized Catalogue of United States Stamps and Covers and check the watermarks.

As you work your way through the steps, you will become adept at properly identifying these complex stamps.

You might even find a treasure hidden away in your collection. You will finally be able to place your stamps correctly in your album. And best of all, you will have slain the dragon.

For collectors with access to a computer and the Internet, a similar tool is available at the marvelous U.S. Stamps 1847 USA Knowledge Is Power web site at www.1847usa.com.

Click on the Washington-Franklin worksheet link from the home page and follow each step to its conclusion. While you are there, explore the entire site. It is a veritable treasure trove for U.S. stamps.

Whether your collecting pleasure is the Hradcany Castle series of Czechoslovakia, Australia's Map and Kangaroo stamps, Mexico's Exporta series, or something equally daunting, you can do it.

Gather the proper tools for the job: a perforation gauge, a watermark tray and fluid, an ultraviolet lamp for stamps with tagging, a color chart, and the appropriate Scott catalog.

Work in steps. Take your time. And remember to relax and enjoy yourself.

When you have learned the basics of the issue, you might want to take it a step further by acquiring and using a good handbook or a specialized catalog.

You can find out what is available on your chosen subject by checking the online card catalog of the American Philatelic Research Library at www.stamplibrary.org.

Taken in steps, no collecting area is too difficult.