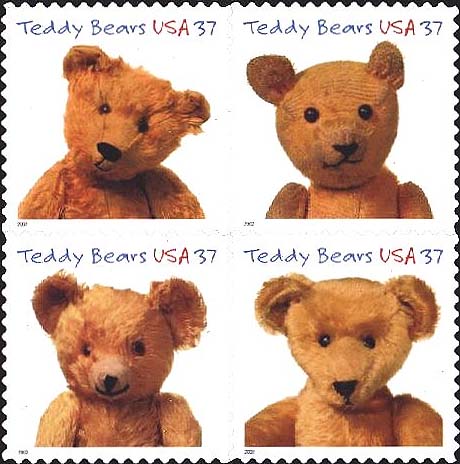 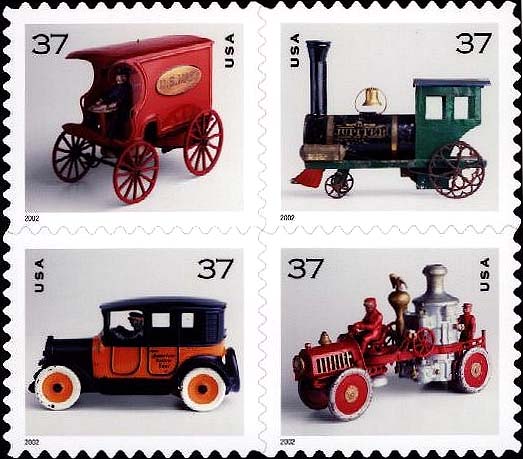 Figure 6. A block of four U.S. 37¢ Antique Toys definitive stamps (Scott 3645a). The designs were first issued nondenominated. Click on image to enlarge. 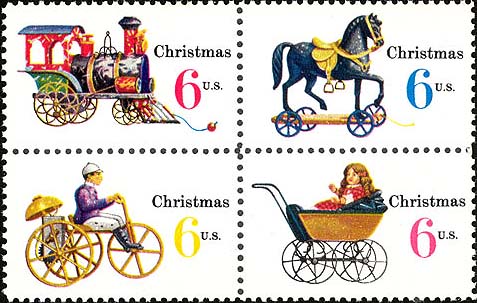 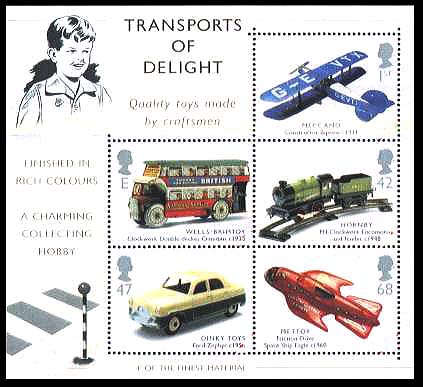 Figure 4. A British Toys souvenir sheet (Scott 2157a), part of the set issued in 2003 that includes the stamps shown in Figure 3. Click on image to enlarge. 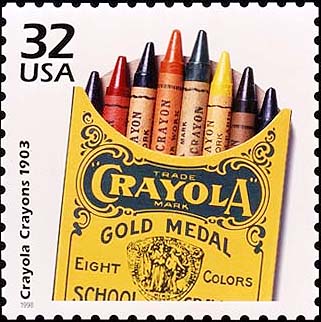 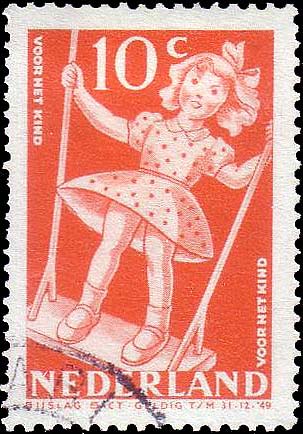 Remember when you were a kid and waited for Santa to bring you that one special toy?

My favorite toy of all was a swing set installed in our backyard by my father when I was about 4 years old.

I spent most sunny days swinging on the swing set with local neighbor kids, just like the little girl on the 1948 Netherlands 10¢+5¢ Swinging semipostal stamp (Scott B192) shown in Figure 1.

Every Christmas I got a box of Crayola crayons, usually one of the big boxes of 64 with a built-in sharpener.

I loved opening that box, seeing the bright colors, smelling the wax and imagining all the great stuff I could make with the package of construction paper that came with the crayons.

In 1998, the United States Postal Service honored Crayola crayons with a 32¢ stamp (Scott 3182d), shown in Figure 2, part of the 1900s pane of its Celebrate the Century series.

The stamp was part of a set issued in 2003 that included several other transportation-theme toy stamp designs, including the 42-penny Hornby M1 Clockwork Locomotive and Tender stamp (Scott 2155), shown in Figure 3, right. Its subject is another of my husband's favorite toys, a toy train.

The five British Toys stamps were also issued as a souvenir sheet (Scott 2157a), shown in Figure 4.

Collecting the British Toys stamps in all of their formats is a wonderful way to begin a toys topical stamp collection.

I had never really thought much about it, but different forms of transportation seem to be recurring themes in popular toys, especially toys that are considered boys' toys.

The block of four U.S. 6¢ Antique Toys Christmas stamps (Scott 1418b) shown in Figure 5 depict four transportation-theme toys: a toy train, a wheeled toy horse, a wind-up tricycle and a doll in a baby carriage.

These stamps were also issued with wavy-line precancels (Scott 1415a-18a).

The precancels were used in 68 cities across the United States to see if issuing stamps as precancels would speed the processing of the great influx of holiday greeting cards.

Four more transportation-theme toys rolled their way onto U.S. stamps in 2002. A block of four 37¢ Antique Toys definitive stamps (Scott 3645a) is shown in Figure 6.

The toys featured on the small definitive stamps are a locomotive, a mail wagon, a fire pumper and a taxicab. They were issued in several formats for the convenience of mailers.

Stamps with these designs were first issued June 27, 2002, as nondenominated (37¢) self-adhesive booklet stamps. The following month, after the postal rate increase took effect, the stamps were issued as 37¢ stamps in both coil and booklet formats.

The 100th birthday of the teddy bear, one of the most endearing and best-loved toys of all time, happened to fall in 2002.

I must confess that I have a small collection of teddy bears. Many of them live atop the desk where I wrote this article.

I love the Teddy Bears stamps so much that I used them on my holiday mail in 2002 instead of the Snowmen Christmas stamps issued that year.

Good little girls might hope to receive a doll from Santa this year.

Dolls have been popular stamp subjects too.

I was too old for a Barbie doll when it first made its appearance on the toy scene, but every year of my childhood Santa brought me a baby doll not unlike the doll pictured on the 32¢ Doll by Martha Chase stamp (Scott 3151d) shown in Figure 9. The stamp is one in the pane of 15 American Dolls stamps issued in 1997.

Many countries, such as French Polynesia, have depicted indigenous dolls on their stamps. The ones showing children in traditional costumes are great ways to teach kids about people in other countries.

I knew that I was getting older when I began to see the toys I played with as a child being offered in antique shops.

With today's electronic toys, I wonder how much longer today's children will enjoy really old-fashioned playthings that have been feature on stamps, such as tops, kaleidoscopes and Flexible Flyer sleds.

At least these toys are now enjoying a second life as antiques and collectibles for the nostalgia-minded.

If you are looking for a family project over the Christmas holidays, why not flip through your stamp albums and see what stamps you can find that illustrate toys.

It will be a treasure hunt for your children or grandchildren, and you can explain what your favorite childhood toys were. What better way to spend quality time with the family, reminisce, play with your stamps, and mentor new collectors all at once?