Even the most ordinary stamps can yield extraordinary collecting fun 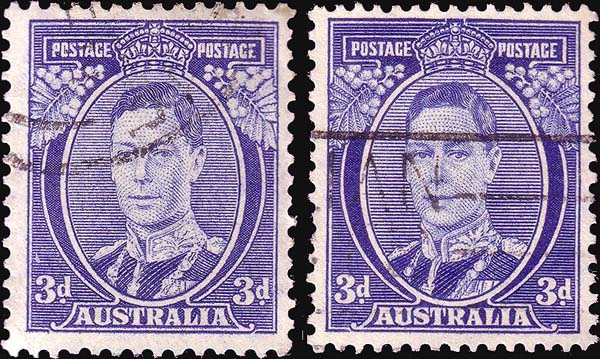 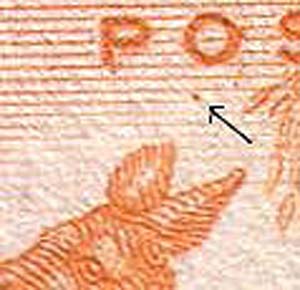 Figure 5. A close-up of the dot of color between the kangaroo's ear and the "O" of "POSTAGE" variety of the ½d orange Kangaroo stamp. Click to view all eight images. 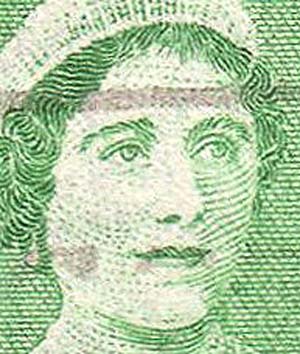 Figure 4. A close-up of the detail showing the white face variety of the type II 1d Queen Elizabeth stamp. 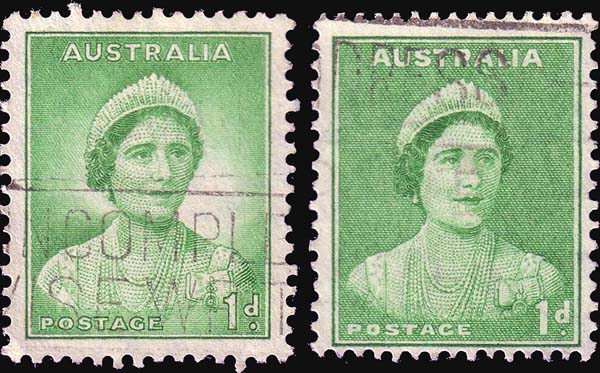 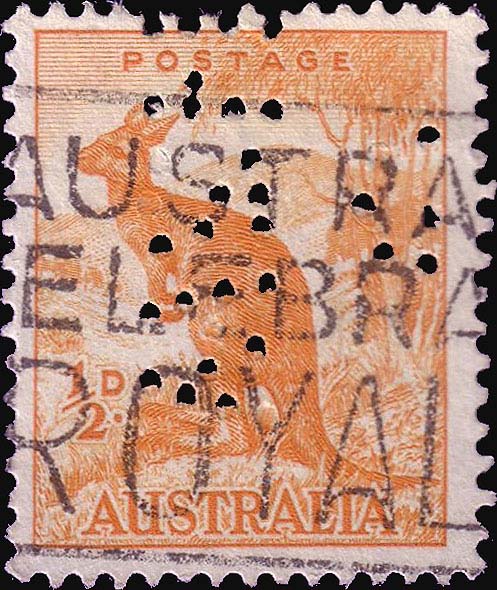 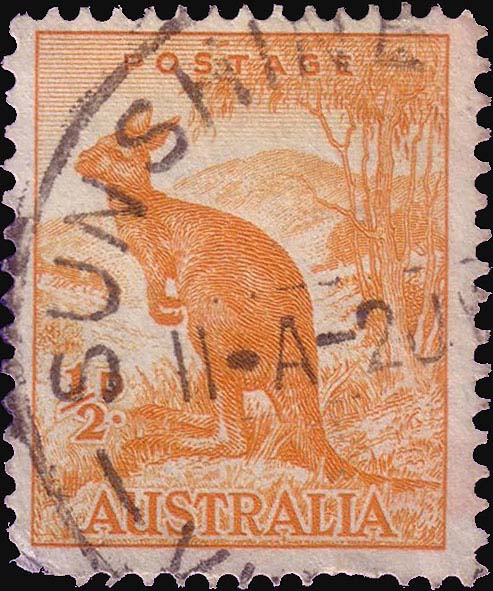 A few years ago, a friend gave me a box crammed full of common Australian regular-issue (definitive) stamps from the 1930s and 1940s.

Even though these stamps are 60 to 70 years old, like most stamps that reside in stamp albums, they have little cash value or catalog value.

Couple that with the fact that these are not the most beautiful stamps ever issued and you will perhaps have forgiven me for pushing this box deeper into the dark recesses of my stamp room closet.

One rainy day, for no particular reason, I dug the box out and started poking through the stamps.

I began by sorting them by denomination to see what I had.

I noted some interesting postmarks, such as the Sunshine, Victoria, postmark on the ½-penny orange Kangaroo stamp shown in Figure 1. That helped to brighten the rainy day.

Out of curiosity, I looked up Sunshine and found that it is a suburb of Melbourne.

I also found some stamps with perforated initials, known by collectors as "perfins."

The ones I found had the initials "G. N.S.W." (Government New South Wales) or "V.G." (Victoria Government). These initials indicated the stamps were used on Official mail of the state governments. A ½d orange Kangaroo stamp with the

Private companies also have used perfins on their office stamps to deter theft and noncompany use by employees.

Once I had done the sort by denomination, I was ready to consult a catalog. I used both the Scott Standard Postage Stamp Catalogue and The Australian Commonwealth Specialists' Catalogue published in Australia by Brusden-White.

For these stamps, I first pulled out Scott standard catalog Vol. 1.

That did not deter me. I was determined to have fun working with these very ordinary-looking stamps and seeing what I could learn from them.

I had several hundred examples of the emerald green 1d Queen Elizabeth stamp.

She was the wife and queen consort of King George VI and the mother of the current queen.

Checking the catalog listings, I noted that the 1d emerald stamps all had the same multiple crown and CA watermark, so watermarking the stamps was unnecessary to sorting.

I immediately noticed that some of my stamps had what looked like a halo behind the queen's head, while some did not. A quick check of the Scott standard catalog informed me that type I (Scott 167) had a highlighted background and outlines around the numeral and letters in the inscriptions.

The same design with a background that appeared solid and no outlining around the inscriptions was type II (Scott 180).

After finishing the main sort, I wondered if I was missing other varieties that were not featured in the Scott standard catalog.

There are varieties called "retouch around the letters 'USTRA' " (in "Australia") and one called "retouched shading at right" for the type I stamps with highlighted background, neither of which I found in my accumulation.

I had better luck with the minor varieties listed for the type II stamps.

The specialized catalog listed three varieties: "white face," "retouch on neck and hair" and "colored flaw on face." It was not a lot of detail to go by, and there were no illustrations, but I began examining the type II stamps with a magnifying glass.

At long last I came across two stamps that looked quite different from all the others. One of them, a detail of which is shown in Figure 4, has almost no shading lines on the queen's nose and chin. Could this be the white-face variety?

By this time, I was getting weary of looking at green, so I turned my attention to the ½d orange Kangaroo stamps.

Use of this stamp became commonplace during World War II when Australia imposed a ½d war tax on all letters. The tax was usually paid by affixing a ½d Kangaroo stamp to the letter in addition to the stamp for regular postage.

This time I was able to sort the unwatermarked stamps from those with the multiple crown and CA watermarks. It was an easy task and did not require the use of watermark fluid. The watermarks can be clearly visible when the stamps are placed face down on a dark background.

Those were the easy steps. More difficult was checking for varieties listed in the specialized catalog.

I found only one, a dot of color between the kangaroo's ear and the "O" of "POSTAGE," a close-up detail of which is shown in Figure 5, but others in the specialized catalog sound interesting enough to keep me looking for them: "fungus flaw on branch behind 'roo," "foggy hills," and a

I'm sure that all of these can be found by taking the time to look for them. The specialized catalog affixes hefty premiums for them, so they are worth looking for.

My mixture also had dozens of the 3d ultramarine King George VI stamps on multiple small crown and CA watermarked paper (Scott 170). A thin-paper variety is listed as 170a. The stamps come in two gauges of perforation: 13½ by 14 and 14 by 13½.

A dark ultramarine stamp with the same design and watermark but perforated gauge 15 by 14 is listed as Scott 183.

The design of this stamp also differs from the earlier one in that shading lines on the king's right eyebrow go down and the uniform epaulette is longer. The longer epaulette is the much easier characteristic to spot.

You don't have to spend a lot of money to form a specialized collection. Start with what you have at hand.

What stamp accumulations do you have gathering dust in your closet? Start sorting them and see if you have hidden treasures and the makings of a specialized collection.