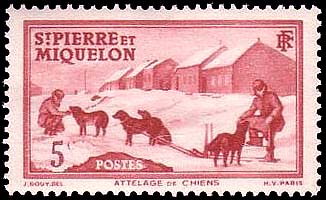 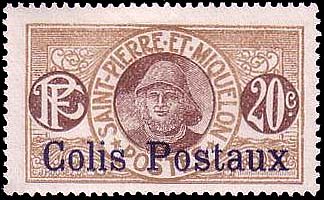 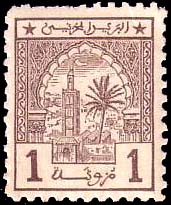 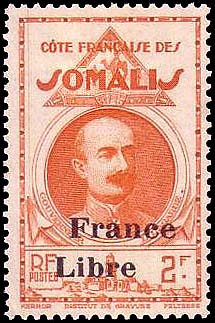 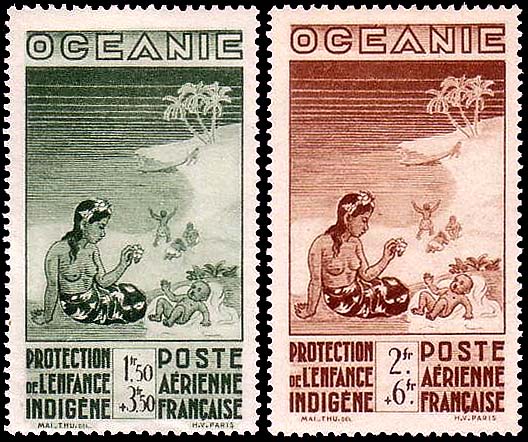 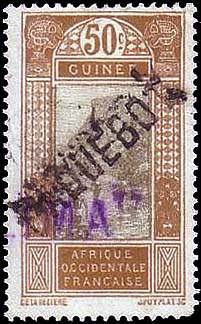 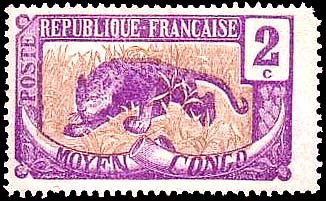 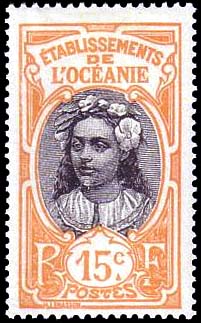 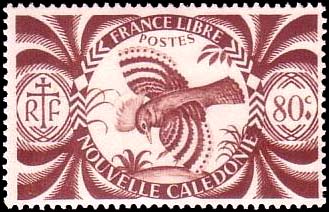 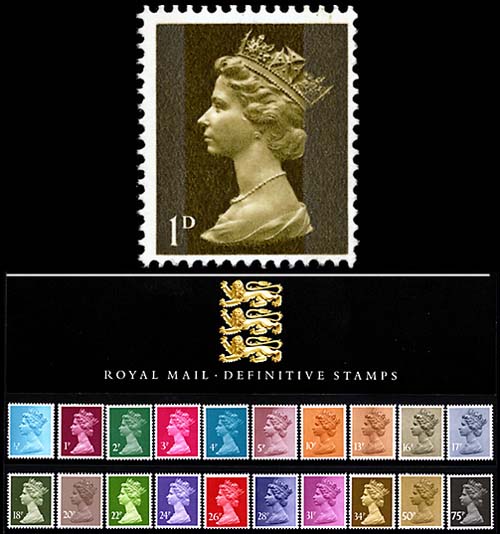 I collected stamps as a youth. An adult collector a few doors down also collected stamps. He had what appeared to my young eyes to be a fabulous collection housed in gigantic Minkus albums.

He also had stock books full of duplicates that he would sell to neighborhood kids for a few cents each. I was his best customer. I would spend hours agonizing over how I would spend my allowance of 25¢, and almost always ended up with some French colonies stamps. They were my favorites.

All of this came flooding back into my memory as I worked my way through a recently acquired France and colonies collection that contained some of my old favorites.

The French Polynesia 15-centime orange and black Tahitian Girl stamp (Scott 29) shown in Figure 2 features a lovely Polynesian maiden with a flower behind her ear.

The colors on French colonial stamps are often brilliant and in unusual combinations: fuchsia and turquoise, blue and orange, purple and bistre.

Seeing them all again was like renewing an acquaintance with long lost friends.

As I continued thumbing through the collection, I saw some nice postal markings on the used stamps.

The stamp bears a very clear straightline "Paquebot" handstamp applied diagonally across its face. The paquebot marking indicates that the stamp was affixed to a letter that was posted on board a ship.

Next to capture my attention was the set of two French Polynesian airmail semipostal stamps (Scott CB2-3) shown in Figure 5. The stamps, which I had not seen before, are inscribed "Protection de L'enfance Indigene," which translates roughly as "native child welfare."

These stamps, produced by the government of Vichy France during World War II but not issued in the colony, were not listed in the Scott Standard Postage Stamp Catalogue until the 2004 edition.

In the past, the Scott listing policy for unissued Vichy stamps was inconsistent. Some of the unissued stamps were not listed, but some were. The Scott catalog editors dealt with the problem by listing all Vichy stamps, issued and unissued, starting with the 2004 edition of the Scott standard catalog.

The Vichy government, headed by Marshal Petain, was officially neutral, but it actively cooperated with the Germans.

Ironically Operation Torch in November 1942, one of the America's first battles in the European Theater in WWII, was against Vichy forces in French Morocco and Algeria.

During the fight, some Vichy military officers switched sides and joined the Allies. Hitler responded by occupying the remainder of France and disbanding the Vichy military, although the Vichy government continued the civilian administration of the country.

The Vichy government produced stamps for most French colonies, including the colonies that were controlled by the Free French.

Free French colonial administrations proudly overprinted stamps "France Libre" for use in the colonies they controlled.

Continuing my perusal of my new French colonies collection, I found another mysterious stamp that I could not recall having ever seen before.

It took some time to work out the Middle Eastern inscriptions, but eventually I narrowed it down to French Morocco.

Consulting the Scott standard catalog, I found the stamp, shown in Figure 7, illustrated, noted and valued, but not listed. The catalog states: "Stamps of this design were issued by the Cherifien posts in 1912-13."

The Cherifien post was a local post that operated in Moroccan cities and in Tangier from 1892 to 1919, at first using handstamps on the letters.

In 1912, the Cherifien post issued adhesive stamps in values from 1 centime to 50c. A Cherifien local post 1c Tower and Palm Tree stamp is shown in Figure 7.

My French colonies collection was becoming more interesting every time I turned a page, even though the stamps I was seeing are inexpensive.

Stamp collecting is great that way. You can have all sorts of fascinating stamps in your collection without having to spend a lot of money.

The 20-centime Fisherman stamp shown in Figure 8 was issued in 1925 for St. Pierre and Miquelon, two small French islands off the coast of Newfoundland.

If you had even a rudimentary exposure to French in high school, you might be able to translate the "Colis Postaux" overprint and figure out that this is a parcel post stamp (Scott Q4).

The Scott standard catalog notes that a double-overprint variety of this stamp exists. I examined mine very carefully and can safely say mine is an ordinary example, with a Scott catalog value of $2.10, but I am very pleased I have it in my collection.

In fact, the small collection I acquired contained many stamps from St. Pierre and Miquelon that filled a good number of spaces in my album.

These are wonderful stamps with snow, dog sleds, boats, fish and ice. It made me cold just looking at them. A 5c carmine-lake Dog Team stamp (Scott 175) is shown in Figure 9.

I flipped the album back a few pages and was instantly transported to New Caledonia, a tropical island in the South Pacific.

New Caledonia is a large island about 1,200 miles northeast of Brisbane, Australia.

It is rich in deposits of nickel, which has been mined in New Caledonia for more than a century with devastating effects to the environment.

The natural habitat of the endangered kagu bird is threatened.

The stamp has an Art Deco design that also nicely reflects the indigenous Melanesian art and design.

The "France Libre" inscription arching over the bird helps date the stamp. The stamp was issued in 1942 at a time when New Caledonia was a vital staging area for Allied forces in the Asia-Pacific Theater of WWII.

Collecting French colonial stamps is a great way to have a worldwide collection. You have the benefit of worldwide representation but with a much more manageable scope. Best of all, the stamps are pretty.

To join with other collectors interested in collecting this area, write to the France and Colonies Philatelic Society, Edward Grabowski, 741 Marcellus Drive, Westfield, NJ 07090 or visit the web site at www.fcpsonline.org.