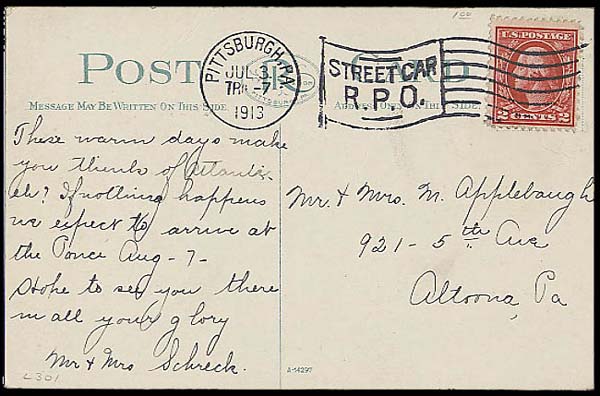 Figure 2. The address side of a picture postcard processed by a streetcar RPO. The postcard bears a Pittsburgh, Pa., July 3, 1913, streetcar RPO waving flag machine cancellation.

The carriage of mail by railway predates the first postage stamp. Mail was carried by rail in 1830 on the Manchester and Liverpool Railway in Great Britain.

At first, the mail was carried as freight and sorted for delivery after off loading.

But then someone got the idea of putting route agents aboard the trains to have them sort the mail en route, and the railway mail car was born.

In England, the first regular sorting of mail aboard a train began in 1838 on the London-to-Birmingham run. By the 1860s, most countries in the world with railways had some railway mail service.

There was some sorting of mail on the line between Washington and Philadelphia as early as 1838, but according to most sources, the first railway post office in the United States, which began July 28, 1862, was on the Hannibal and St. Joseph Railway in Missouri. This service lasted only a few months before being disrupted by the Civil War.

George B. Armstrong, the assistant postmaster of Chicago, next took up the idea, and a mail sorting car went into service Aug. 28, 1864, on the Chicago and North Western Railway on the run from Chicago to Clinton, Iowa.

Using the technology of the day, railway mail service became the quickest way to deliver a letter from point A to point B.

The popularity of the service grew rapidly, and in less than 10 years, 57 railroads were operating mail cars over more than 15,000 miles of track in the United States.

Typical railway mail service duplex cancelers used in the United States had the route endpoints, or an abbreviation for them, at the top of the postmark, the letters "R.P.O." for "railway post office" at the bottom of the postmark and the letters "RMS" for "Railway Mail Service" between the bars of the killer part of the marking.

A cover from the Enid & Waurika railway post office postmarked May 19, 1909, is shown in Figure 1, with "RMS" between the killer bars of the cancel.

On Nov. 1, 1949, the name of the Railway Mail Service was changed to Postal Transportation Service. New cancelers supplied after that date had "PTS" between the killer bars, but "RMS" cancelers remained in use after the name change.

Closed-pouch mail was sorted and postmarked at a post office and shipped as freight. It was not processed by the RPO.

Initial-terminal mail delivered to the RPO at the beginning point of the line was sorted and postmarked en route by the RPO. Processed mail was bagged and off-loaded at the appropriate stations along the line or passed on at the end of the run for forwarding.

Between-terminals mail was picked up at stations after the train began its run. This mail was sorted, postmarked, and if appropriate, off-loaded while the train was en route. At stations where the train did not stop, mail pouches were hooked at speed from small cranes. On some trains, passengers could mail letters or postcards by dropping them through a special slot in the mail car.

In 1942, there were still about 1,000 railway mail routes. On April 30, 1971, seven of the last eight railway mail routes were terminated. The last remaining railway post office, a high-speed mail-only train between New York City and Washington, D.C., made its last run June 30, 1977.

The Railway Mail Service also operated RPOs at terminal and transfer offices. Although mailpieces processed at these facilities bear RPO postmarks and RMS cancellations, they were not actually processed in railway mail cars.

Not all of the mail moved under the auspices of the Railway Mail Service was moved by trains.

Streetcar RPOs operated on city streetcars or trolleys. The first streetcar RPO service in the United States began in 1892 in St. Louis. Mail was picked up at the beginning of the route and at stations along the route and processed en route and delivered to mail trains.

In 1899, the jurisdiction for most streetcar RPO service passed from the Railway Mail Service to local postmasters, but "RPO" was retained in the cancels.

The address side of a picture postcard processed by a streetcar RPO is shown in Figure 2. The postmark reads "Pittsburgh, Pa., July 3 1913 TR-7." The waving flag machine cancel is inscribed "Streetcar R.P.O."

Some Railway Mail Service routes were actually carried by boats on inland waterways.

In the 1890s, most Ohio River and Mississippi River steamboats carried RPOs. RPOs also operated on many lake steamers and packets.

The longest boat RPO routes were between New York City and San Juan, Puerto Rico; New York and the Panama Canal Zone; and several routes from Seattle, Wash., to several ports in Alaska.

A picture postcard processed by the San Juan-to-New York boat RPO is shown in Figure 3. Addressed to Fairfield, Maine, it is postmarked Jan. 30, 1906, and bears a Feb. 5, 1906, Fairfield receiving mark.

Most boat RPO service ended with the outbreak of World War II. The last year-round boat RPO service, the Phila. & Norfolk RPO aboard the vessel Elisha Lee, terminated after its final run on Feb. 28, 1953.

Although airmail field offices were not mobile post offices, from 1927 to 1953 many of them operated under the auspices of the Railway Mail Service.

In 1927, government operation of transcontinental airmail routes was discontinued and taken over by private contractors. At that time, the Air Mail Service ordered the closing of all airmail field offices.

The decline of passenger train service led the U.S. Post Office Department to seek to replace RPOs with highway post offices, but that is a subject for another Refresher Course.

This article has dealt primarily with the U.S. Railway Mail Service, but equivalent services operated in most countries having a rail system, which also is a possibility for a future Refresher Course.

Annual membership in the society is $23 in the United States and Canada and $38 elsewhere.