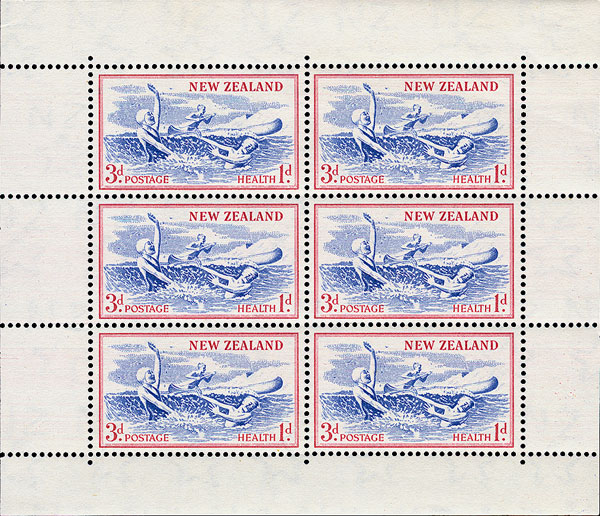 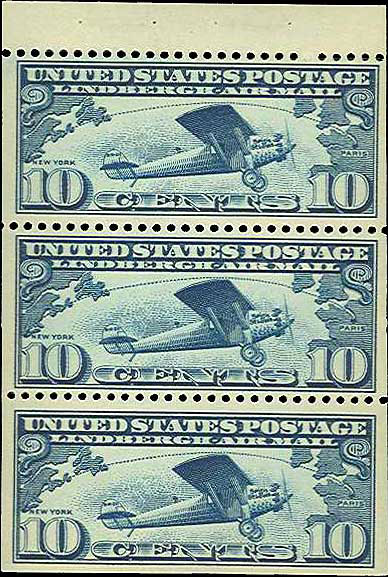 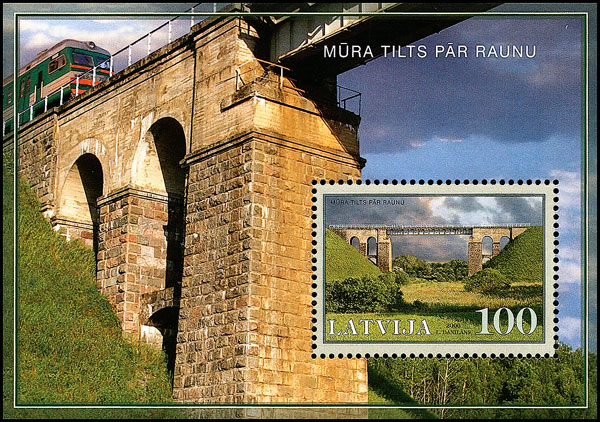 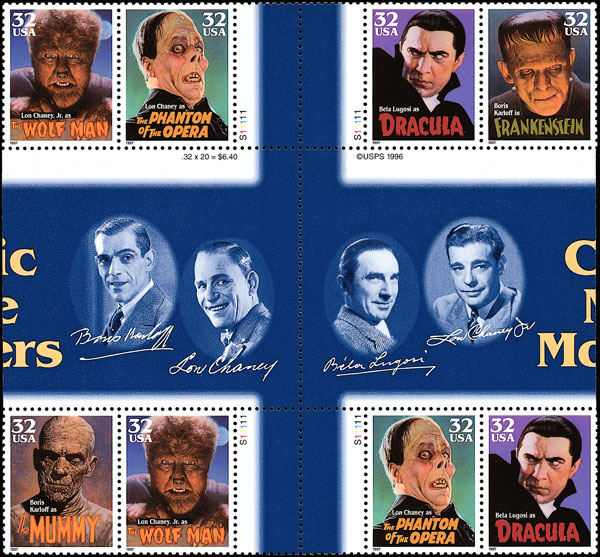 Figure 2. A cross-gutter block of eight 32¢ Classic Movie Monster stamps. This is a position piece cut from a press sheet, such as the Figure 1 sheet. Click on image to enlarge. 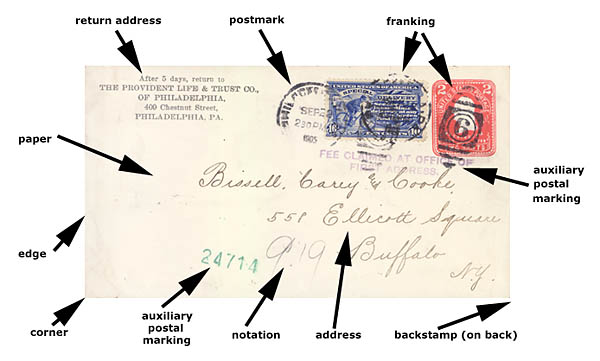 Figure 1. An uncut press sheet of 1997 United States 32¢ Classic Movie Monster stamps (Scott 3168-72). There are nine panes of 20 stamps each in the uncut press sheet. Some collectors cut the large sheets into position pieces. Click on image to enlarge.
Previous
Next

One of the most misunderstood and misused terms in stamp collecting is "sheet of stamps."

In common parlance, what collectors and noncollectors alike often refer to as a sheet of stamps is in fact a pane of stamps.

The sheet is the complete printing unit of stamps as it comes off the press, either as a sheet or part of a long roll called a web.

Sheets usually comprise two to 12 (or more) panes. Panes are the units into which sheets are divided before delivery to the post office for sale. Many recent United States commemorative stamps, for example, have been produced in 240 stamp sheets that were divided into 12 panes of 20 stamps each.

The U.S. Postal Service (and its predecessor the U.S. Post Office Department) have occasionally sold full uncut sheets of stamps to the public. A sheet of 180 1997 U.S. 32¢ Classic Movie Monsters stamps (Scott 3168-72) is shown in Figure 1. Notice that there are nine panes of 20 stamps each in the sheet.

The first U.S. stamps to be sold in uncut sheets were the imperforate 1¢ green Benjamin Franklin stamp and 2¢ carmine George Washington stamp (Scott 343-44) issued in December 1908.

Uncut sheets of these stamps were sold to vending- and affixing-machine companies to be cut into strips and used as coil stamps. Collectors demanded that the uncut sheets be sold to the public as well, and they were.

Other U.S. regular-issue stamps were sold as uncut imperforate sheets into the 1920s.

In 1935, uncut sheets of the special printings stamps (nicknamed Farley's Follies) were sold to the public.

In 1994, the Postal Service offered uncut press sheets of the 29¢ Legends of the West stamps (Scott 2869), and it has offered some issues in this format every year since.

Not all uncut sheets sold still exist in that format. In fact, few of those sold before 1994 do. Collectors like to cut the sheets up into position pieces that, by the position of the stamps and the selvage in the piece, show where it came from in the sheet. Such pieces usually fit on an album page.

What distinguishes a souvenir sheet from a pane is that, although the stamps are postally valid, the postal authority that issued it generally intended it to be saved as a souvenir, rather than to be used for postage.

A Latvian 2006 100-santims Raunu Railroad Bridge souvenir sheet (Scott 644) is shown in Figure 3. Unlike the U.S. International Philatelic Exhibition souvenir sheet of 1926, this Latvian souvenir sheet contains only a single stamp that was not sold in any other format.

The distinction between a pane and a souvenir sheet is often rather hazy. Some collectors and dealers refer to the U.S. Celebrate the Century panes (Scott 3182-91) as souvenir sheets or even as souvenir panes. They do have many of the characteristics of a souvenir sheet, including a large area of selvage with a lot of information about what is being commemorated.

But most collectors and dealers judge that they were issued primarily for postal use and consider them to be stamp panes rather than souvenirs.

In addition to normal panes, some stamp sheets are cut up into booklet panes for sale in stamp booklets. These are usually collected as either entire booklets or as booklet panes. The panes are often identifiable by the selvage or the way they are perforated or die cut.

This booklet pane is distinguishable from a vertical strip of three regular sheet stamps by the selvage at the top (complete with staple holes) and by the lack of vertical perforations. The sheets used for this booklet were perforated only horizontally, skipping every third row, and they were cut apart vertically and between every third row horizontally. The top and middle stamps in a pane are perforated horizontally, while the bottom stamp has straightedges at both sides and at the bottom.

The selvage at the top of this pane is important. Most collectors would not accept a booklet pane that did not include the selvage.

"Miniature sheet" is also a term that suffers from imprecise usage by many dealers and collectors.

A miniature sheet is a smaller-than-normal pane of stamps issued in that form in addition to being issued in full panes. The smaller size and fewer stamps are what distinguishes it from a regular pane.

A miniature sheet is usually without marginal markings or text saying that the sheet was issued in conjunction with or to commemorate some event, which is what distinguishes it from a souvenir sheet.

In practice, many dealers and collectors refer to both small regular panes and souvenir sheets as "miniature sheets."

New Zealand has been perhaps the world's most prolific issuer of miniature sheets, regularly issuing them with its semipostal issues from 1957 to 1990.

Collectors and dealers also often use the words "mini-sheet" and "sheetlet."

They can mean just about anything. Linn's does not use them in its stories.