Basic collecting terms: what you don't know can hurt you 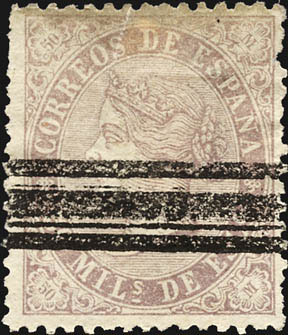 Figure 5. A Transvaal 2-penny olive-bister Coat of Arms stamp (Scott A13). The stamp has a pulled perforation at lower left. Click on image to enlarge. 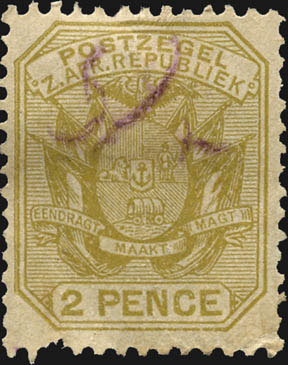 Figure 4. The heavy black horizontal lines on this Spanish 50-milesima Queen Isabella II stamp (Scott 99) show that it was remaindered. Click on image to enlarge. 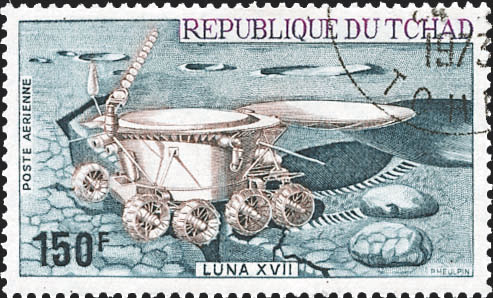 Figure 3. A canceled-to-order Chadian 150-franc Lunokhod on Moon airmail stamp (Scott C141). CTO stamps are generally worth less than the same stamps that have been postally used. Click on image to enlarge. 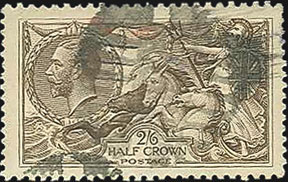 Figure 2. A heavily canceled British 2-shilling, 6-penny olive-brown Seahorses stamp (Scott 179). Because of the heavy cancel, this stamp is worth much less than its Scott catalog value. Click on image to enlarge.

Figure 1. A United States $2.60 blue Zeppelin Passing Globe airmail stamp (Scott C15). If this stamp is mint, never-hinged, it has a Scott catalog value of $1,275. If it is unused, hinged, the catalog value is only $750. Click on image to enlarge.
Previous
Next

Stamp collecting is laced with terms peculiar to it. Not knowing the meaning of such terms can hurt you.

Mint: A mint stamp is a stamp that has not been used for postage and that retains its completely undisturbed original gum. This condition is also known as "mint, never-hinged," but the "never-hinged" is implied by "mint."

Many collectors are willing to pay very high premiums for classic stamps that are mint, never-hinged.

Unused: An unused stamp is a stamp that has not been used for postage but has disturbed gum.

Hinged: This describes an unused stamp that has had a stamp hinge applied to its back.

Hinge remnant: This is the part of a stamp hinge remaining on a stamp. Some remnants seem to be embedded in the gum.

Original gum. A classic stamp that still has part of its original gum remaining is preferred to a stamp that has been regummed or that has no gum.

Cracked gum: As gum ages, if often becomes brittle. Unused stamps that have been improperly handled or stored might display gum that has cracked.

Glazed gum: Sometimes the gum of a stamp that has been exposed to heat and moisture melts into this shiny, hardened state.

Without gum: When mint stamps are improperly stored, they often become stuck together and have to be soaked apart. Moisture in the air or too much moisture used when applying a hinge sometimes causes unused stamps to become stuck down on an album page. Often such unused stamps are soaked to free them from whatever adheres to them. Such stamps are unused, without gum.

Some stamps were issued without gum.

The British 2-shilling, 6-penny olive-brown Seahorses stamp (Scott 179) shown in Figure 2 is heavily canceled. Although this used stamp has a Scott catalog value of $75, it might sell for as little as a tenth of that, if it would sell at all.

On piece: This is a used stamp (or stamps) still attached to part of the envelope or card it was used on.

On cover: A used stamp or stamps still affixed to the cover on which they were used.

Canceled-to-order: Stamps canceled in full sheets without doing postal duty and sold at a steep discount from face value to dealers are CTO.

The cancels might be printed on the stamps at the same time that the stamp design is printed. A stamp with a cancel and with full gum is likely a CTO stamp. CTO stamps are often lightly canceled in one corner.

CTO stamps are generally worth less than equivalent stamps that have been postally used.

Remaindered: Stamps withdrawn from postal use and demonetized are sometimes sold in bulk to stamp dealers as remainders. Remainders are often marked with lines or obliterators to indicate that they are no longer valid for postage.

Flaw: A flaw is a pre-existing blemish resulting from the stamp production process, such as a paper inclusion, a preprinting crease, blind perforations or an ink smudge.

While small flaws generally detract from the desirability of a stamp, very noticeable or spectacular flaws can be of interest to collectors of errors, freaks and oddities.

Constant plate flaws resulting from a defect in the printing plate are a different matter, and they can sometimes bring a premium.

Damaged: A stamp that has had bad things happen to it after the stamp production process is considered damaged. Damage can occur at any point in the life of a stamp.

Separation can be especially traumatic. Stamps that are hastily torn apart often suffer damage to their perforations.

Pulled perf: This describes paper that was removed below the base line of the perforation holes.

The Transvaal 2-penny olive-bister Coat of Arms stamp (Scott A13) shown in Figure 5 has a pulled perforation at its lower left.

Color changeling: This is a stamp whose ink or inks have changed colors since it was produced. Collectors often hope that such stamps are previously unknown errors of color or missing color errors, but they are merely damaged stamps.

Bleaching by prolonged exposure to sunlight is the most common source of a color changeling. Some inks can disappear almost completely, while others are only lightened and some are barely affected.

Some orange, yellow and red inks used to print stamps in the early 20th century are prone to leaching sulfides from the atmosphere, turning them black or brown. The original color can often be restored to the correct hue by a short bath in hydrogen peroxide solution.

Other types of damage include tears, scuffs, folds, creases, stains and other damage to the stamp paper or design.

When you are engaging in a stamp collecting transaction — buying, selling, trading — make sure that you understand the terms being used. In stamp collecting, what you don't know can definitely hurt you.