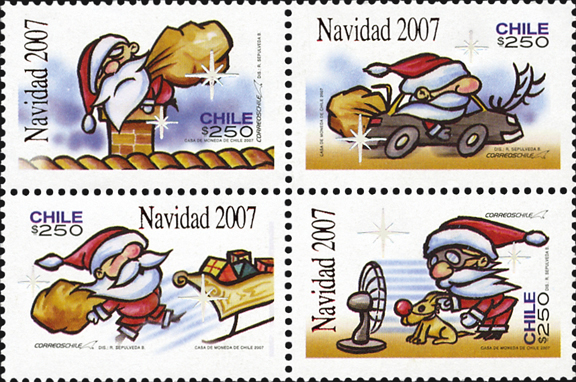 Figure 5. Aland issued this nondenominated Santa Claus Christmas stamp on Oct. 9. It pictures a Santa from a Coca-Cola ad. Click on image to view all eight. 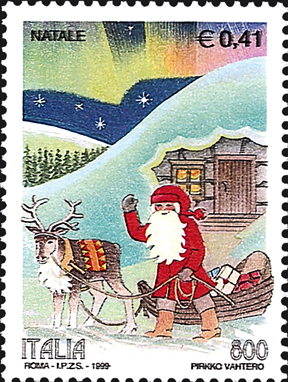 Figure 4. Round Icelandic 60-krona and 80k Christmas Flatbread stamps issued in 2007 picture a bread served with smoked meat. Click on image to enlarge. 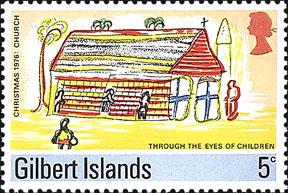 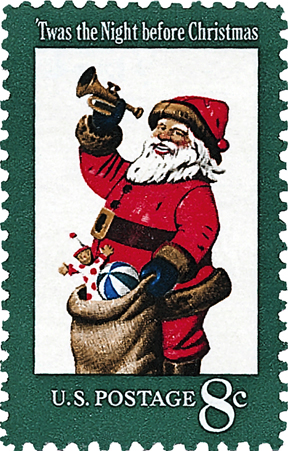 Figure 2. A Pitcairn Islands souvenir sheet of four Christmas stamps desiged by youth. The scenes on the stamps depict gift giving. Click on image to enlarge. 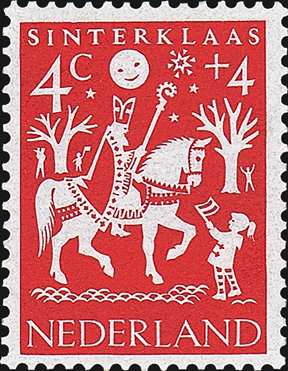 As in many recent years, the stores were ablaze with Christmas decorations before Thanksgiving. Shelves and racks groaned under the weight of goods vying to be taken home, wrapped and given to delighted (or bewildered) friends and family members.

In a nutshell, this describes the commercial aspects of Christmas in North American and probably most of the rest of the Western world.

When holiday hubbub becomes overwhelming, I like to flip through my stamp albums. Most of the nations of the world have issued holiday stamps, and the best of them illustrate local Christmas customs and decorations.

The St. Lucia Festival of Light is held Dec. 13 throughout Scandinavia in honor of St. Lucia, a fourth century Sicilian who was martyred for her faith.

The stamp shows the way St. Lucia Day is celebrated. The youngest daughter in the household dresses as St. Lucia. She wears a white robe that signifies purity and a red sash signifying the martyr's blood. On her head, the little girl wears a crown of evergreens or lingonberry twigs to which candles are attached. In bygone days many unfortunate accidents occurred when the wax candles were lit. Today the candles are artificial with battery-operated lights.

The boys in the household join little St. Lucia in procession through the house. The boys are dressed in white robes or pajamas. They wear cone-shaped hats with gold stars and carry a wand onto which a large gold star has been affixed.

The children sing a traditional song: "Now the light is carried forth, proud on its crown, in every house, and every home, the song shall ring." They awaken the parents and bring them hot coffee and a traditional breakfast of sweet saffron and raisin buns called lussekattor.

Who would have thought one could learn all of that from a single postage stamp?

The youth of Pitcairn Islands provided illustrations for the 1979 souvenir sheet (Scott 191a) shown in Figure 2.

The youngsters' designs depict gift giving on Pitcairn. All the gifts are gathered and taken by wheelbarrow to the main square where they are hung on trees. At sunset on Christmas Day, the island residents gather at the square. The gifts are cut from the trees and distributed, and then all the people return home with their gifts.

In 2007, Iceland issued the 60-krona and 80k round Christmas stamps shown in Figure 4 that depict a traditional flatbread made at holiday time. A decorative leaf pattern is cut into the bread, which is served with smoked meat.

I like traditions, but so many of the Christmas traditions of my youth have disappeared. My mother used to take me to see the animated Christmas window displays in the biggest department store downtown. The big department stores have moved to suburban malls that have no display windows, animated or otherwise.

Santa was always a big part of Christmas for my two brothers and me. Close to Christmas, I looked forward to receiving the weekly Life magazine, because there would be Coca-Cola ads that featured the best, most Christmasy Santas.

These Santa scenes were created by a first-generation American illustrator named Haddon Sundblom, whose father emigrated from Aland in the 1880s.

Sundblom created Santa paintings for Coke for more than 30 years, and the Coca-Cola Co. still brings out the old paintings each year for Christmas.

The stamp features one of Sundblom's wonderfully evocative Santas.

Just looking at the stamp will bring back memories of your youth. You can almost smell the Christmas cookies baking.

I like traditional holiday decorations. Every year the shops seem to have some new ideas for decorating a Christmas tree. One year all the stores were pushing tartan plaid ribbons and gold ornaments. Another year the decorations were pink and white feathery concoctions.

I marvel at those who change their decorations from year to year, when my own Christmas tree is loaded down with handmade ornaments provided by family members over decades, as well as delicate German-made hand-blown silvered glass ornaments that belonged to my grandmother: a reminder of her German heritage.

Four Pitcairn Islands Christmas stamps of 2005 (Scott 627-30) are shown in Figure 6. They depict ornaments with Pitcairn themes including the infamous HMAV Bounty. If I were a Pitcairn Islander, those would be the ornaments I would cherish.

Collecting Christmas on stamps brings the holiday spirit to your hobby 12 months a year.