Collecting advertising covers can be your window on a vanished world 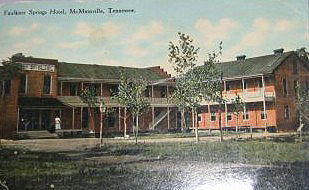 Figure 4. The picture side of a picture postcard showing a color photograph of Tennessee's Faulkner Springs Hotel. Click on image to enlarge. 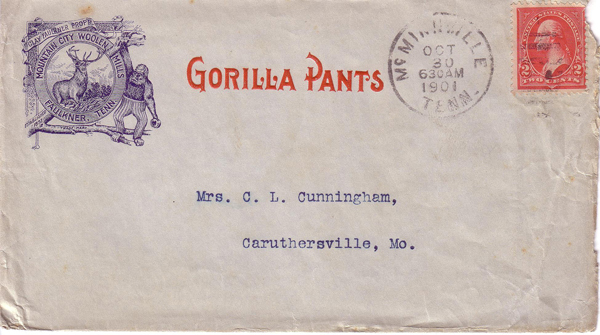 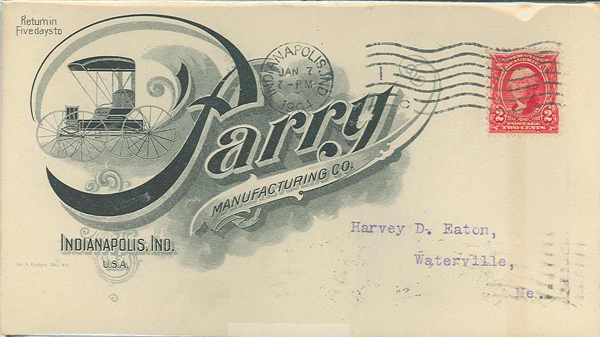 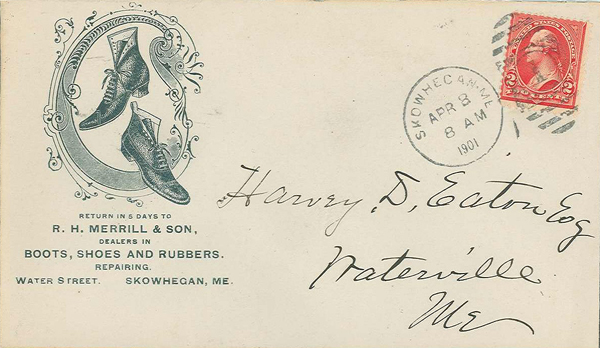 Figure 1. An advertising cover for "R.H. Merrill & Son Dealers in Boots, Shoes and Rubbers." The cover was mailed April 8, 1901, at Skowhegan, Maine. It pictures a pair of lady's shoes. Click on image to enlarge.
Previous
Next

Advertising covers from the 19th and early 20th centuries bring out the historian in me.

It is fun to see and collect mail that touts archaic goods such as whalebone corset stays or high-button shoes, including those pictured on the advertising cover shown in Figure 1.

The advertiser's return address, illustrations and list of goods or services available is called a "corner card."

The corner card on this cover, in addition to showing a pair of high-button shoes, advertises the business of "R.H. Merrill & Son, Dealers in Boots, Shoes and Rubbers. Repairing. Water Street. Skowhegan, Me."

The cover is franked with a 2¢ carmine George Washington stamp tied by an April 8, 1901, Skowhegan, Maine, duplex killer postmark.

Envelopes supplied to guests along with stationery are among the most common advertising covers. You can often find them in dollar boxes at stamp shows.

Advertising covers can be collected topically by the subject being advertised or by the motifs used in the designs.

You can also collect them just because they catch your eye, strike your fancy or otherwise compel you to take them home.

I am partial to covers that give a glimpse into the daily lives of the generations of the not-too-distant past.

Products that were part of their daily lives, but that have passed from use today, were routinely promoted on advertising envelopes at the end of the 19th century. These covers both remind me of charming days gone by and give insight to the way our grandparents and great-grandparents lived, dressed, worked and played.

Today the only places we are likely to see horse-drawn buggies, such as the one pictured in the corner card of the advertising cover for the Farry Manufacturing Co. of Indianapolis, Ind., shown in Figure 2, are in rural Amish communities or theme parks.

In the era when this cover was mailed, Jan. 7, 1904, from Indianapolis to Waterville, Maine, many people used horse-drawn buggies to get around.

Henry Ford's motor car company had only been in business for six months, and many people looked upon horseless carriages with distrust. Why rely on a machine when you could hitch up the horse and take the family where it wanted to go?

The advertisement shows a magnificent stag in an oval frame. A large gorilla wearing striped pants grasps with one foot and hangs by one arm from tree limbs that extend from behind the frame.

The cover instantly brought a smile to my face when I first saw it. The thought of gorilla pants provoked a vivid mental image that still makes me chuckle. How would you go about putting striped pants on a gorilla? Why would you want to?

Every stamp and every cover has a story. I figured there had to be a really great story behind gorilla pants, so I began searching the Internet for the history of the Mountain City Woolen Mills and its founder Clay Faulkner. I was not disappointed.

Faulkner was born in 1845, one of 19 children of Asa Faulkner, a flour mill owner.

Faulkner was trained as a machinist. In 1866, he went into business with one of his brothers as owner and operator of another flour mill. These mills were powered by mill wheels that were turned by water power from mill races on nearby creeks. His training as a machinist was invaluable to the success of the business.

In 1873, Faulkner installed new machinery and converted the flour mill into a wool and cotton mill known as Faulkner Woolen Mills. Ten years later he began building the Great Falls Cotton Mill that would eventually manufacture, spin, weave, bleach, dye, print, finish and sell goods made from cotton and wool.

The building housing the Great Falls Cotton Mill is on the National Register of Historic Places.

When his father passed away, Faulkner took over the family businesses, which had grown to include four separate mills, the most famous of which was the Mountain City Woolen Mills. It was described in 1896 as one of the best-equipped and best-managed manufacturing plants in Tennessee.

The same report, published in the Southern Standard newspaper, noted, "Its product of Jeans and Gorilla Pants are growing in popular favor and demand."

Faulkner also ran a farm that provided fresh produce, milk and meat for his employees. He was a pioneer in establishing a factory outlet store where nearby residents could purchase locally made goods directly from the factory at a discount.

In April 1902, a scant six months after the illustrated cover was mailed, hammering rains flooded the entire area. The dam was breached, and the mill race became a raging torrent that killed several people. Of the 32 water-powered mills that operated in the area at the time of the flood, fewer than a dozen survived.

Faulkner was a true entrepreneur, and he diversified into many kinds of businesses.

In the early 1900s, a mineral spring was discovered on Faulkner property. Faulkner promoted the water as having properties that would restore health.

By 1906, he was shipping mineral water from his McMinnville property at $4 a barrel.

In 1908, Faulkner converted the old Mountain City Woolen Mill into a health resort, claiming that the mineral water was even more beneficial if the waters were taken fresh from the source. The business was called the Faulkner Springs Hotel.

A photograph of the hotel, taken from a 1910 color picture postcard, is shown in Figure 4.

In the mid-1890s, Faulkner tired of his daily five-mile round-trip commute from McMinnville, several miles north of the Mountain City Woolen Mills.

Faulkner purchased land across the street from the mill and began construction on a grand late-Victorian house that became known as "the Biltmore of Tennessee."

Although the Faulkner residence was a mere 10,000 square feet, the house was built with many of the same features as the sprawling Biltmore Estate constructed a decade earlier by George Vanderbilt near Asheville, N.C.

Today the Faulkner house, known as Falcon Rest, operates as a bed and breakfast and historic mansion offering daily tours. It certainly sounds as though it is worth a visit.

So what about those gorilla pants? Were they really meant to gird the loins of gorillas?

In reality, the name was selected to indicate that the pants were tough and would withstand hard wear.

The advertising logo of a dapper gorilla in striped trousers swinging from a branch still tickles my funny bone.

Will today's mail that advertises software titles on CD-ROM or state-of-the-art iPods, cell phones and Blackberries be looked upon with bemused interest by collectors and historians 100 years from now?

Is anyone saving today's advertising mail for the collectors of the future?