Collecting covers: in period, proper use, single use and related terms 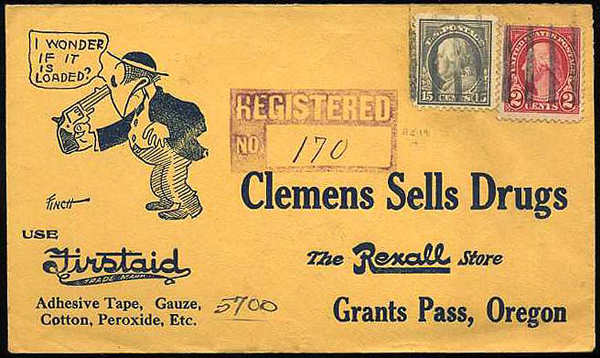 Figure 5. A component-franking registered mail advertising cover addressed to a drugstore in Grant's Pass, Ore. Click on image to enlarge.

Figure 4. A censored airmail cover mailed April 9, 1945, from Washington, D.C., to Ipswich, England. The cover is a single-use of the 30¢ Twin-Motored Transport Plane airmail stamp. Click on image to enlarge. 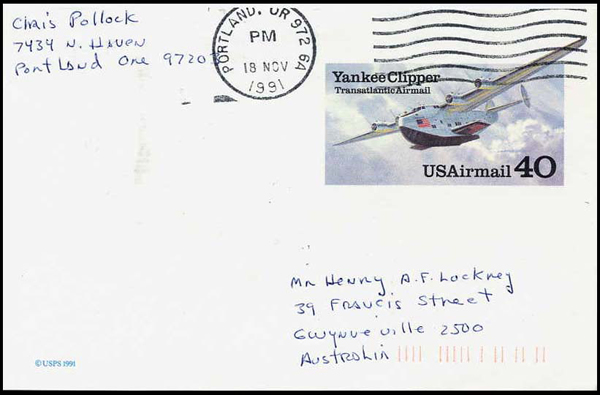 Figure 2. This 40¢ Yankee Clipper airmail postal card mailed from Oregon to Australia was properly used in period. Click on image to enlarge. 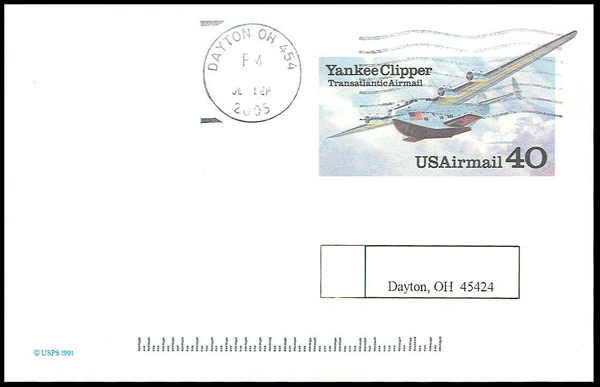 Figure 1. This United States 40¢ Yankee Clipper airmail postal card (Scott UXC25) was mailed from Dayton, Ohio, to a Dayton address in 2005, not during its normal usage period of 1991-95. Click on image to enlarge.
Previous
Next

Not too long ago, I was browsing an online selection of used United States postal stationery.

I was struck that a number of sellers had no idea how to interpret the catalog values of the items that they had posted for sale.

Almost without exception, what was being offered were up-rated, out-of-period uses priced at or near the Scott values for postal stationery used in-period in the ScottSpecialized Catalogue of United States Stamps and Covers.

Many modern U.S. postal stationery items, especially airmail postal cards, have much higher catalog values in used condition than in mint condition. This is because very few of them were used as intended during their periods of use.

For the Scott U.S. specialized catalog value to apply to this airmail postal card, it would have to be used to pay the rate in effect during 1991-95.

Look again at the Figure 1 card. It was mailed Sept. 6, 2005, from Dayton, Ohio, to an address in Dayton. That is more than 10 years after the normal usage period for this postal card ended.

As shown here, most of the address is electronically obscured.

I suspect that the sender of this postal card might have noticed the difference between the mint and used catalog values for it and decided to increase its value, so he thought, by mailing it to himself.

Mailed from Dayton to Dayton and overpaying the domestic postcard rate by 17¢, this international airmail postal card cannot be considered a proper use.

A proper in-period use of the 40¢ Yankee Clipper airmail postal card is shown in Figure 2.

The postal card bears a Portland, Ore., machine cancel dated Nov. 18, 1991, about seven months after the 40¢ airmail postcard rate went into effect and more than three years before it ended. Therefore, it is an in-period use.

The postal card is addressed to Australia, a typical destination for an international airmail postal card, so it was properly used.

A buyer who wanted this used airmail postal card could reasonably expect to pay about Scott U.S. specialized catalog value for it.

Postal stationery items that have been used with additional stamps added are said to be "up-rated."

Unlike the 40¢ Yankee Clipper airmail postal card, a 29¢ Star postal stationery envelope properly used in period does not have significant catalog value.

Catalog value aside, most collectors of used postal stationery probably would not pay money for this envelope because it was up-rated and used out of period.

Some cover collectors like to form postal rate collections with covers that exemplify the different postal rates in effect at a given time.

The ways the rates were paid can have significance for rate cover collectors.

Covers with all the postage and fees paid by a single stamp are called "single-use" or "solo-franking" covers.

Collecting of covers bearing single-uses of stamps of the Presidential series of 1938-39, the Liberty series of 1954-68, and the Transport airmail series of 1941-44 has grown increasingly popular in the past 20 years.

The stamp paid the ½-ounce airmail letter rate to Europe.

This is not an uncommon or valuable cover, according to The Transports by G.H. Davis. It says, "Single franked 30¢ Transport covers to Europe are fairly common, especially to the United Kingdom."

Covers bearing different stamps used to pay different fees and services are called "component covers," although not many collectors use the term.

Figure 5 shows a registered mail component cover, also an advertising cover. It is addressed to a drugstore in Grant's Pass, Ore.

As required by postal regulations for registered mail, the stamps were canceled with undated mute killer cancels. Dated postmarks are on the back.

The term "mixed franking" has a number of different meanings to cover collectors.

In the broadest sense, it is used to describe a cover that bears stamps from two or more different countries or postal administrations that combine to pay postage on the cover.

Covers called "subsequent single-uses" (also known as subsequent solo-franking covers) are interesting curiosities, but they are not greatly sought after unless a distinguishable new printing occurs to serve the new rate.

Subsequent single-use covers occur when a stamp or postal stationery item issued to pay one postal rate happens to exactly pay a different postal rate after one or more rate changes.

For example the 29¢ blue Sandy Hook Lighthouse stamp (Scott 1605) issued April 14, 1978, happened to pay the first-class letter rate that went into effect on April 3, 1991. A use of this stamp to mail a letter during the 29¢ rate period would be a subsequent single use.