Soaker's remorse: here's what to check before ripping a stamp from its cove 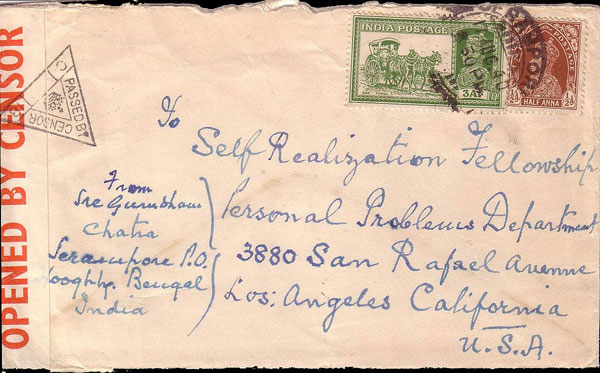 Figure 4. A cover mailed Aug. 17, 1940, from Serampore, India, to Los Angeles, Calif. The cover is addressed to a religious organization that still operates from the same address it occupied in 1940. A censor marking and censor tape are at the left. Click on image to enlarge. 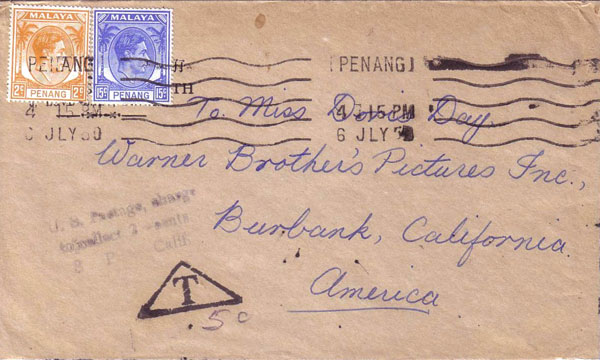 Figure 3. A cover mailed July 6, 1950, from Penang, Malaya, to singer and film star Doris Day, in care of Warner Bros. The cover was underfranked, and 2¢ postage due was to have been collected upon delivery in California. Click on image to enlarge. 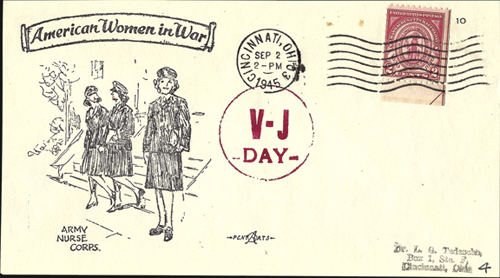 Figure 2. A cover postmarked Jan. 11, 1930, Assawoman, Va. The cover is franked with a United States 2¢ 150th anniversary of the Battle of Monmouth stamp, with the "Molly Pitcher" overprint. Click on image to enlarge
Previous
Next

How many interesting, valuable or historically significant old folded letters or envelopes with stamps and postmarks (known as "covers" to stamp collectors) do you suppose have been destroyed by people who did not know what they were doing?

As a youth, I remember rifling through old letters my parents and relatives let me have. I would cut the stamps from the covers and soak them from the paper to mount in my album.

All these years later, I have a bad case of soaker's remorse. I have no idea whether or not I vandalized historic documents or important covers.

I assuage my guilt with the knowledge that my family members were not the sort of people who were likely to have received a letter carried by the pony express, nor did they know people wealthy enough to have voyaged across the Atlantic in a zeppelin.

Nevertheless, when I look at the sort of material in a stamp dealer's stock that captures my attention today, some of it looks ordinary and certainly would no longer exist had it come my way during my early collecting days.

So what makes a cover interesting, valuable or historically significant enough to keep it intact?

The stamp is certainly important. It is best to leave classic stamps on cover, even if the stamp is not especially scarce or valuable. Look in the Scott Specialized Catalogue of United States Stamps and Covers and the Scott Classic Specialized Catalogue of Stamps and Covers 1840-1940, and you will see that even common 19th-century stamps are generally worth multiples more on cover than off. So it just makes sense to keep them on cover.

Even yesterday's mail might be worth saving. It has become increasingly difficult to find recent U.S. commemorative stamps used on cover. Is anyone saving them? Will they become scarce collectibles of the future? You should save covers you receive that are franked with contemporary-use commemoratives. Consider using recent commemoratives on your mail, even bill payments.

In addition to the stamps, postmarks might also contribute to the desirability of a cover. Postmarks can be applied by handstamp, machine or even by pen. Pictorial postmarks, slogan cancels and postmarks from discontinued post offices are collectible.

In the past, some postmark collectors clipped and saved a rectangular piece of the cover bearing the postmark and the stamp. Today, nearly all collectors agree that postmarks are better collected as entire covers.

The irresistible cover shown in Figure 1 bears a common U.S. 2¢ George Washington definitive stamp of the Fourth Bureau issue. The stamp is tied to the cover with a handstamped postmark with four-bar killer cancel from Polkadotte, Ohio.

Polkadotte, located near the Ohio River halfway between Portsmouth, Ohio, and Parkersburg, W.Va., had a post office from 1890 to 1950, but it no longer has a post office of its own. The post office at Scottown (ZIP code 45678) now serves Polkadotte. That makes this a discontinued post office or DPO usage.

Look a bit more closely at the postmark. Notice anything unusual? The year is upside down and the date "12" is handwritten.

The cover was sent to the W.W. Gavitt Medical Co. in Topeka, Kan. When it was received at the company, "Testimonial" was handstamped at the lower right of the cover.

W.W. Gavitt Co. was a manufacturer of patent medicines, the most popular of which was Gavitt's System Regulator, a laxative that was advertised as curing kidney, liver and stomach problems. The company also marketed a card game called Gavitt's Stock Exchange.

I am glad that no one tore the stamp from this envelope and threw the rest away.

The cover shown in Figure 2 bears a slightly less common "Molly Pitcher" overprinted 2¢ Fourth Bureau issue stamp (Scott 646), issued in 1928 to commemorate the 150th anniversary of the Battle of Monmouth.

Mary Hays, nicknamed Molly Pitcher by the soldiers, became a hero by bringing pitchers of water to quench their thirst during the battle.

The Jan. 11, 1930, postmark is another handstamp with a four-bar killer. The postmark is from a place with the unusual and somewhat suggestive-sounding name of Assawoman, Va. I became instantly curious about the name when I saw this cover.

Assawoman is one of Virginia's barrier islands, overshadowed by its more famous neighbors, Chincoteague and Assateague, known for their wild ponies.

The name Assawoman is from the Algonquin language, although the exact meaning has been lost. It was sometimes spelled "Assawaman" until 1966 when the current spelling was standardized. There is also an Assawoman Bay and Little Assawoman Bay.

The stamp and the postmark both make this cover a keeper.

Sometimes the sender or recipient of a letter offer reason enough to keep a cover intact.

The cover shown in Figure 3 was sent July 6, 1950, from Penang, Malaya, to movie star Doris Day in care of Warner Bros. The cover is franked with two Malaya-Penang King George VI definitives totaling 17¢.

In the 1950s, Doris Day was the No. 1 box office star in the world. She sang, danced, and acted in comedy and dramatic roles that brought her fans everywhere, including Malaya.

The fan who sent her this letter, however, did not do her any favors, because he affixed insufficient postage. According to a handstamp on the cover, 2¢ postage due was collected in California. That postage due handstamp and the triangle containing a "T" (which stands for "Taxe" or postage due) add to the interest and desirability of the cover. The famous recipient and the postage due markings make this a cover worth keeping intact.

A cover mailed Aug. 17, 1940, from Serampore, India, to Los Angeles, Calif., is shown in Figure 4. The letter is addressed to the Self-Realization Fellowship's Personal Problems Department.

I had never heard of the Self-Realization Fellowship so I did a search on the Internet and discovered that it was founded in 1920 by Paramahansa Yogananda.

Yogananda followed the teachings of Kriya Yoga, a form of spiritual meditation. Interestingly, the religious organization still operates from the same address in Los Angeles that is on the 1940 cover.

The cover has other interesting features: resealing "Opened by Censor" tape and a triangular "Passed by Censor" marking.

Americans sometimes forget that World War II did not begin Dec. 7, 1941. Great Britain, of which India was a crown colony, had been fighting since September 1939. As a result, most of the British Empire had invoked censorship of the mails from that time.

Advertising corners or illustrations, added decorations on envelopes called "cachets," backstamps, auxiliary markings and even the method or route of delivery can make an otherwise ordinary-looking cover extraordinary.

We will explore more of those in a future Refresher Course. In the meantime, remember to look at the stamp, postmark, sender, recipient and any other postal markings that appear on an envelope before removing a stamp from a cover to put into your album.