The evolution of franking: different ways to indicate postage was paid 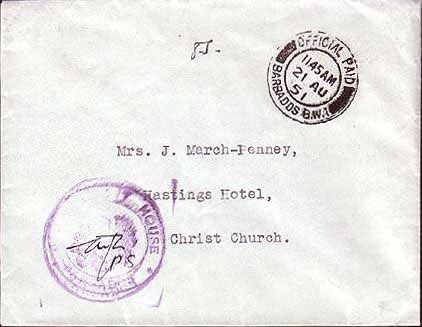 Figure 6. A Barbados Official mail cover mailed Aug. 21, 1951. The cover is franked by the "Official Paid" postmark in the upper-right corner. The other marking is an authorization. Click on image to enlarge. 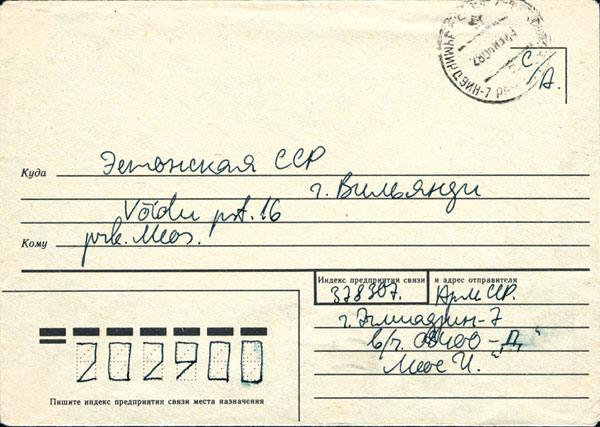 Figure 5. A cover from an Estonian conscript in the Soviet army stationed in Armenia to his family in Estonia. The initials "CA" in the upper right corner of the envelope stand for "Soviet Army." Click on image to enlarge.

Figure 4. A free-franked cover mailed May 24, 1951, from Washington, D.C., by Sen. Richard M. Nixon. Sen. Nixon's printed signature in the upper-right corner franks the cover. Click on image to enlarge. 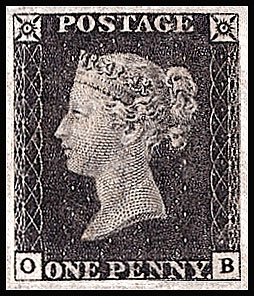 Figure 3. A Penny Black, the world's first adhesive postage stamp, issued by Great Britain on May 6, 1840. Click on image to enlarge. 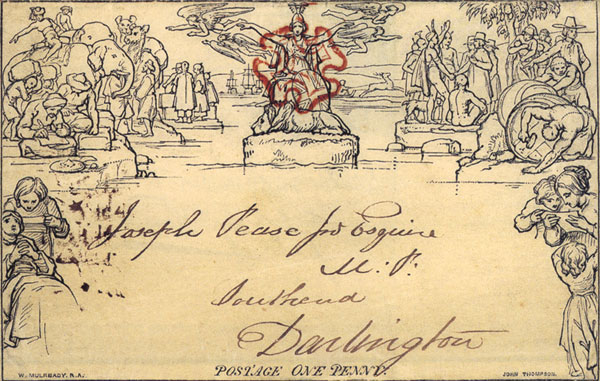 Figure 2. A first-day cover of the British Mulready 1-penny letter sheet, used May 6, 1840. The Mulready letter sheet is recognized as the world's first postal stationery item. Click on image to enlarge. 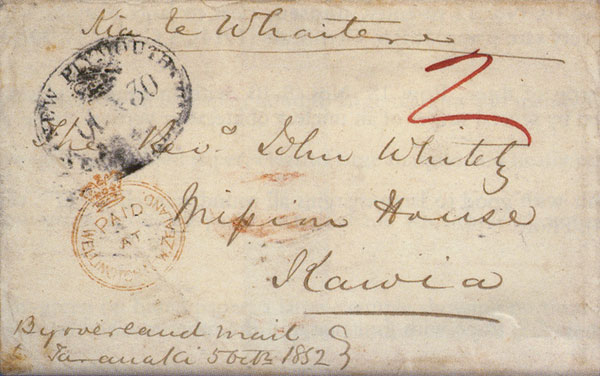 Figure 1. A cover mailed from Wellington to Kawia, New Zealand, on Oct. 5, 1852. The crowned circle "Paid at Wellington, New Zealand," handstamp in red at lower left franks the cover by showing prepayment of the postage. Click on image to enlarge.
Previous
Next

Merriam-Webster's Collegiate Dictionary, 11th edition, defines the noun frank as, "1a: the signature of the sender on a piece of franked mail serving in place of a postage stamp" and "b: a mark or stamp on a piece of mail indicating postage paid."

It defines frank used as a verb as, "1 a: to mark (a piece of mail) with an official signature or sign indicating the right of the sender to free mailing" and "c: to affix to (mail) a stamp or a marking indicating the payment of postage."

Most stamp collectors probably think primarily of postage stamps when it comes to franking, but there are many different ways that a piece of mail can be franked.

Originally there was not much need for franking, because most mail was sent postage due to be paid for by the recipient upon delivery. But on those occasions where the postage was prepaid by the sender, the means of marking that fact on the cover gave rise to the first frankings, usually a manuscript or handstamped "Paid" marking (or the equivalent in other languages) and the amount paid.

The cover shown in Figure 1 was mailed from Wellington to Kawia, New Zealand, on Oct. 5, 1852. It was carried overland in New Zealand by the famous Maori foot post. The crowned circle "Paid at Wellington, New Zealand," handstamp in red at lower left franks the cover by showing prepayment of the postage.

In the 1830s, Sir Rowland Hill was responsible for two major innovations in postal franking. Hill became interested in reforming the inefficient British postal system. He wrote and distributed a pamphlet, Post Office Reform: Its Importance and Practicability (1837), that eventually led to major postal reform in Great Britain.

In his pamphlet, Hill demonstrated that most of the cost of delivering a letter came from the cumbersome methods of handling the letter at the point where it was mailed and at its destination.

Hill argued that the cost of delivering a letter could be dramatically reduced by having the sender prepay the postage using either adhesive stamps or letter sheets with printed designs.

The Mulready 1-penny letter sheet, recognized as the world's first postal stationery, was issued May 6, 1840. Figure 2 shows one of the letter sheets used on the first day.

On its front, the cover bears a red Maltese cross cancel. A London Lombardy Street May 6, 1840, datestamp is on the back (not shown).

It could be argued that the letter sheet is franked by the entire intricate design printed on its front, but it is the "Postage One Penny" inscription at the bottom below the address that gives the letter sheet its postal value.

The Mulready letter sheets were not popular with postal patrons. The idea of postal stationery fell by the wayside temporarily, to be resumed more successfully years later.

Hill's other franking innovation, the adhesive postage stamp, was very popular from the start and remains so today, although other forms of franking have made steady inroads against it.

A British 1d black Queen Victoria stamp (Scott 1) is shown in Figure 3. The world's first adhesive postage stamp, known as the "Penny Black," was issued May 6, 1840.

The first stamps were issued with moisture-activated gum, but lacked a built-in means of separation. They had to be cut apart to be used, usually with scissors. Over time, various means of separation were introduced including perforations (tiny holes punched in the unprinted margins between the stamp designs), rouletting (slits cut into the paper between the stamp designs) and die cuts (a process that cuts through self-adhesive stamp paper, but not the backing paper that keeps the stamps together).

A method of franking that predates both "Paid" markings and adhesive stamps is the free frank.

Over time and around the world, the privilege of sending mail free of charge has been extended to various persons by virtue of who they are or what office they hold.

Those granted the franking privilege have included presidents, first ladies, cabinet members, congressmen, postmasters, members of parliament, and (especially in time of war or while serving in combat zones) military personnel.

An elected official or other government functionary usually exercises the franking privilege by signing his name in the upper right corner of the envelope where a stamp would normally be placed.

A cover from Sen. Richard M. Nixon that was mailed by free frank is shown in Figure 4. The cover is postmarked Washington, D.C., May 24, 1951.

The printed return address reads: "United States Senate, Committee on Labor and Public Welfare, Free." The cover is franked by Sen. Nixon's printed signature, at right above the printed "U.S.S." for U.S. Senate.

U.S. military personnel were simply required to write "Free" in the upper right corner of the envelope.

The cover shown in Figure 5 was mailed June 28, 1983, from an Estonian conscript in the Soviet army from a base in Armenia to his family in Viljandi, Estonia. The sender exercised his free frank by writing "CA," the Cyrillic initials for "Soviet Army" in the upper right corner of the envelope.

In the United States, the printed statement franking on Official mail is often called a "penalty franking," because the penalty for private use is included in the statement.

Other countries have used handstamped seals or postmarks to frank Official mail.

The Official cover shown in Figure 6 was mailed Aug. 21, 1951, in Barbados. It bears a handstamped seal in purple ink at lower left indicating the government department originating the correspondence. It is franked by a strike of an "Official Paid Barbados B.W.A." postmark in the upper-right corner.

A future Refresher Course will discuss other methods of franking.