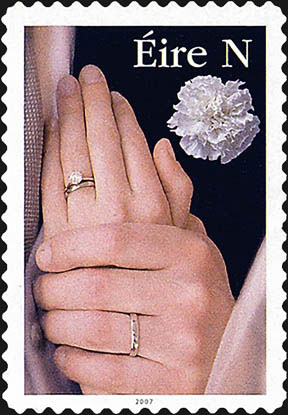 Figure 6. The picture side of a postcard demonstrating the romantic coded meanings assigned to postage stamp placement. Click on image to enlarge.

Figure 5. Switzerland's 2003 70-centime Diddl love stamp (Scott 1156). The cartoon mouse is a favorite in Switzerland. Click on images to view all eight.

In 1967 when the Beatles sang "All You Need is Love," some of the world's postal administrations heeded the advice and began issuing love stamps.

The first United States Love stamp (Scott 1475), shown in Figure 1, is as minimalist as the lyrics of the Beatles song. The 8¢ stamp, issued in January 1973, was a colorful graphic of the word "LOVE" designed by Robert Indiana. The U.S. Postal Service promoted the stamp as useful for many occasions.

When you really think about it, conveying the concept of love on a postage stamp is a nightmarish design challenge. Thick novels and widescreen movies are devoted to the subject with varying degrees of success. How can a postage stamp illustrate love, or for that matter, any other emotion?

Some stamps do a better job than others. The United States has used many flowery designs that hearken back to Victorian displays of romantic love. The flowers are augmented with birds that bill and coo, and the word love repeated over and over, similar to the ending of that Beatles song. Do any of these design elements really convey the emotion love?

Brides like pretty love stamps to use on their wedding invitations, but some of the bright, bold graphic U.S. love stamps did not fill the bill. In recent years, the Postal Service has issued Wedding stamps as well as love stamps.

The 58¢ stamp, shown in Figure 2, pays the rate for letters weighing up to 2 ounces, the category into which the invitation with all of its enclosures usually falls.

The 41¢ Wedding Hearts stamp is for use on the stamped, addressed envelope sent with the invitation for return of the R.S.V.P. card.

The Postal Service's Love stamp for 2007 met with some disapproval. The 39¢ Hershey's Kiss Love stamp (Scott 4122), shown in Figure 3, features a commercial product.

The chocolate confection wrapped in silver paper is instantly recognizable. For those who are chocoholics, love and chocolate go hand in hand. It is too bad the stamp is not chocolate scented.

The 39¢ Hershey's Kiss stamp was probably not used on many wedding invitations, but it is a perfect stamp for Valentine's Day cards. Chocolate kisses without calories — what could be better?

Venezuela had explored the same design in 1972 with the 1-bolivar Globe in Heart Shape stamp (Scott 995), shown in Figure 4, which was issued for World Health Day.

The designs are different, buy the common design theme might make these stamps of interest to those who collect stamp twins.

In the stamp design, Diddl and the object of his affection are shown reading love letters that they sent to each other. That excitement we used to feel when collecting a love letter from the mailbox is almost nonexistent nowadays because letter writing is becoming a lost art.

The post office was an important purveyor of romance in bygone days through the delivery of love letters. There were no love stamps in the late 19th or early 20th centuries, but stamps were nevertheless used to convey emotions.

The picture postcard shown in Figure 6 illustrates how the position of a stamp on an envelope could convey not only love but also a kiss — and even a kiss off.

Try to remember this when you send your tax return to the Internal Revenue Service this year. If you put the stamps on straight, you are telling the tax collectors that you love them. Turn the stamps on their right sides and that sends the message "Do not write to me anymore." I have a feeling this won't work, but it might be worth trying!

One of the more novel presentations of love is the Slovenian 180-taler Heart stamp (Scott 514) issued in 2003, shown in Figure 7. The perforations are somewhat complicated and might make this stamp difficult to use in quantity, but it is a fun stamp to have in your stamp album.

Ireland has issued a number of interesting love stamps. The one that captures my attention (and my heart) is the nondenominated (0.48-euro) Hands With Wedding Rings stamp (Scott 1700) shown in Figure 8. What the stamp illustrates is perfect for wedding invitations. It is reminiscent of thousands of wedding photographs.

Make this Valentine's Day a collecting adventure. Send your sweetie a love letter using a love stamp. Angle the stamp to the left to send a kiss, and then get out your wedding album to see if you have a picture that matches the one shown on the stamp from Ireland.

Stamp collecting can be very romantic. Have a happy Valentine's Day.