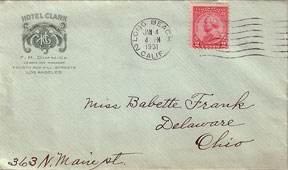 Figure 3. A cover with a Hotel Clark corner card mailed from Long Beach, Calif., on Jan. 4, 1931, to an 8-year-old girl in Delaware, Ohio. Click on image to enlarge. 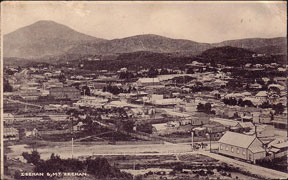 Figure 2. A picture postcard showing a view of Zeehan, Tasmania, and franked with a common stamp. The author found the postcard inside a cover she bought from a dollar box at a stamp show. Click on image to enlarge. 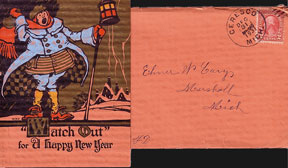 You have probably heard the old adage "beauty is only skin deep." The implied message is that inner beauty should be more revered.

But that's not always the way it is in life, nor is it often true in stamp collecting, where outer beauty accounts for bigger price tags and greater appreciation, especially by those who have the financial means to own the best of the best.

For the rest of us, there is that inner beauty to seek.

If you have ever been to a stamp show, you may have noticed collectors flipping through boxes of covers.

They may also be seeking postmarks, auxiliary markings or mail that was carried by a special service, such as Express Mail.

Some collectors are looking for covers illustrated with designs advertising a product, or with designs called cachets that celebrate the issuance of a new stamp or some other event. There are many good reasons to add covers to a stamp collection.

The outer beauty of a cover can be stunning, but even downright dog-eared examples can have an inner beauty if the contents are still inside the envelope. Finding such a cover makes looking through thousands of them worthwhile.

At a recent stamp show, I spent a couple of hours looking through dollar cover boxes, picking out the covers that still had their original contents.

The first one I found was hard to miss. The bright orange cover shown in Figure 1 is franked with a 2¢ carmine Washington stamp (Scott 554) and is postmarked Ceresco, Mich., Dec. 31, 1931. Ceresco is in south central Michigan, lying along the Kalamazoo River. It has had a post office since 1843. This cover was sent to Marshall, Mich., just five miles from Ceresco.

I liked the cover's cheery color and New Year's Eve postmark. When I peeked inside, I liked it even better. It contained a card printed on the same orange paper as the envelope. The card shows an old-fashioned town crier ringing in a happy new year greeting. The artwork is so colorful and appealing, it is difficult to believe that I acquired it for $1.

My next $1 bargain was not nearly so attractive. In fact, it is rather unattractive. This cover was mailed from Zeehan, Tasmania, to Beaumont, Texas, in 1946. The envelope is toned, the postmark is not legible and the stamp is a common 3-penny King George VI stamp first issued in 1942.

But inside the cover was a four-page letter written in careful penmanship by a young teenager named Colin who lived in Zeehan. He was writing to his Texas pen pal named Dick.

In addition to the letter, there is a picture postcard of Zeehan, shown in Figure 2, with a pinprick in the card that signifies the location of Colin's home.

Figure 3 shows the real prize from my recent foray into bargain box shopping. It is a pretty green linen cover with a corner card from Hotel Clark in Los Angeles franked with a 2¢ General von Steuben (Scott 689) stamp.

The cover is postmarked Long Beach, Calif., Jan. 4, 1931. It was sent to Miss Babette Frank in Delaware, Ohio.

The prettiness of this cover first caught my eye. I also could tell as soon as I picked it up that it had an enclosure.

Later in the day, I took a break from bargain hunting and started looking through the covers to see what was inside them. I opened the cover and could not believe my eyes.

A $1 bill, Figure 4, dropped out of a folded piece of letterhead stationery from the Security Trust Bank in Long Beach.

This wasn't just any dollar bill. It was a 1928 silver certificate called a "funny back" because of the odd reverse on it that looks nothing like today's dollar currency. This dollar was as crisp as the day it was printed, folded in half, but otherwise in perfect condition. It had been a long time since I had even seen a silver certificate.

I read the letter that Uncle Eddie had sent to his niece. It said he was sending her a dollar for her eighth birthday, and wished her much joy and happiness. A dollar was a great deal of money for an 8-year-old child in the midst of the Great Depression. And the little girl set the letter aside and never spent the dollar. How extraordinary!

I could not wait to get home and investigate this further. Searching the Internet, I discovered this 1928 $1 silver certificate is worth $50 to $75. Not bad for a day's work.

I figured Uncle Eddie had to be faring reasonably well in the Great Depression to be sending dollar bills to 8-year-olds.

I did a search for him and discovered that he and his brother Maurice had a furniture store in Long Beach that catered to high-end customers. Ed and Maurice Frank were internationally renown retailers of midcentury modern furniture. They advanced the careers of such notables as Charles and Ray Eames and Mies van der Rohe.

The moral of this story is simple: Always look inside a cover. Treasure sometimes awaits.