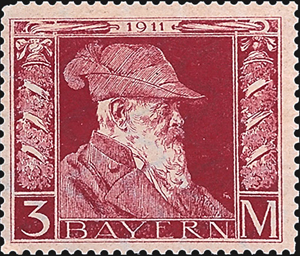 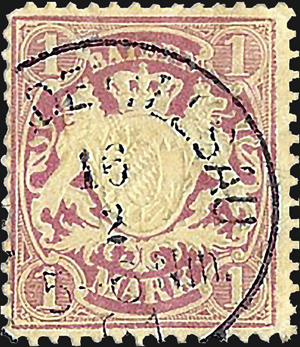 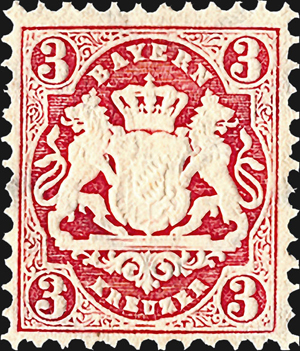 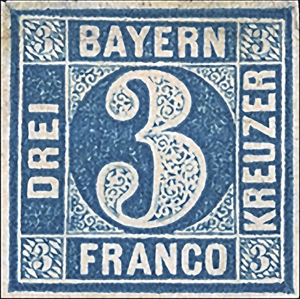 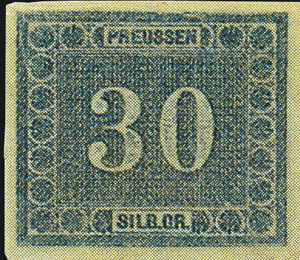 Figure 3. An 1866 Prussian 30-silbergroschen Numeral stamp (Scott 22), with the reversed design showing through the paper. This stamp is photographically cropped from a larger block. Click on image to enlarge. 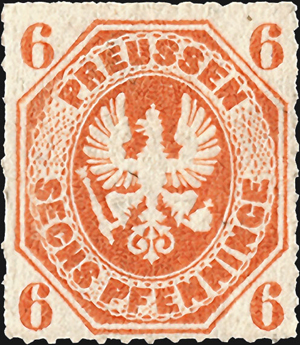 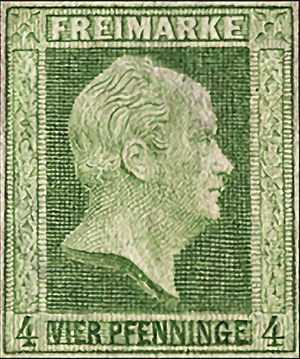 The Smithsonian's National Postal Museum has a new feature on its web site called "Collecting Ancestral Homelands." The direct link to the web site is www.postalmuseum.si.edu/homelands/index.html.

The web site shows several stamp collectors who collect the stamps of the countries from which their ancestors came. Each page within the web site focuses on a single collector who tells a little about himself, his ancestral home and his stamp collection.

Clicking on the stamps at the top of the home page takes you to stories that go with the stamps. Each fascinating story gives a taste of what it is like to collect ancestral homeland stamps. You can add your own story to the mix.

Both Prussia and Bavaria had their own stamps during the time my great-great-great grandparents were immigrating to the New World. The Prussian stamps are a good bit more challenging to collect than those of Bavaria, partly because of cost, and partly because Prussia only had its own stamps from 1850 to 1868, while Bavaria issued hundreds of stamps from 1849 to mid-1920.

Frederick William IV opposed unifying all German states in a greater Germany, which put him at odds with German liberals. As an alternative, he attempted to establish a Prussian-led German union, which alienated some other German kingdoms.

Frederick William IV died in 1861. The Prussian stamps issued in October 1861 had a Prussian Coat of Arms design. A 6pf Coat of Arms stamp (Scott 16) from this issue is shown in Figure 2.

There is a another reason why collecting stamps from Prussia is difficult: the 10-silbergroschen and 30sg stamps (Scott 21-22) issued in December 1866.

They were printed by typography with the design in reverse on a transparent paper similar to goldbeater's skin. The gum was applied over the backwards printing, and when the stamp was affixed to an envelope the printing showed through with the design facing the right way.

However, removing the stamp from the envelope usually results in a badly damaged or destroyed stamp. This method of stamp production prevented the reuse of stamps to protect postal revenue, but finding these stamps in decent condition today is extremely challenging. A 30sg Numeral stamp (Scott 22) is shown in Figure 3, with the design showing through the thin paper.

The existence of forgeries to deceive collectors complicates the process of collecting them even further.

Bavaria has no such stamps designed to self-destruct, and many of the stamps have minimal catalog values. The first issues of Bavaria were nearly square, with a large numeral as the main design element.

The first 1-kreuzer stamp, Bavaria Scott 1, is pretty expensive and would be difficult to collect on a tight budget. There are also many known forgeries of this issue. But other stamps, such as the 3kr Numeral stamp (Scott 2) shown in Figure 4, are inexpensive.

The Coat of Arms issue launched in 1867 has greater possibilities for wallet-conscious collectors. An added bonus is that they have attractive designs with embossed centers and lots of varieties to collect. The Coat of Arms issues of 1867 were imperforate and produced on paper with silk threads running through it.

Although my family archives have no correspondence from relatives who remained in Germany, I fantasize that these were the stamps that were used on letters from the German relatives to those who were establishing themselves in southwestern Ohio.

In 1870, Coat of Arms stamps of the same design but perforated gauge 11½ on paper watermarked with a diamond pattern called lozenges were issued. A 3kr Coat of Arms stamp (Scott 24) is shown in Figure 5. There are two different collectible types of lozenges watermarks.

A currency change prompted new stamps of a similar, but not identical design, to be issued in 1874-75 and denominated in pfennigs and marks. A 1-mark Coat of Arms stamp (Scott 32) is shown in Figure 6.

These later issues of the Coat of Arms stamps are numerous, with enough varieties to keep a keen specialist happily occupied for years.

Germany was unified in 1870, but Bavaria continued to issue its own stamps into 1920. My favorites are those bearing the portrait of Prince Regent Luitpold, a man who rather unwillingly ruled Bavaria for 26 years. Luitpold took over for his nephew, King Louis II, who was declared unfit to rule. Luitpold remained Prince Regent for the rest of his life, which ended in 1912. Prince Regent Luitpold's reign is considered the golden age of Bavarian culture.

These stamps honoring Luitpold reflect the arts and crafts style popular at the time of issue. A 3m Prince Regent Luitpold stamp (Scott 88) is shown in Figure 7.

At the time these stamps were current, my immigrant ancestors had gone to their great reward, and my grandparents, third-generation American citizens, were courting.

Collecting stamps from my ancestral homelands has added depth to my hobby and greater appreciation of my ancestors.

Perhaps a similar collection would affect you the same way.