A closer look: magnifiers are indispensable tools for collectors 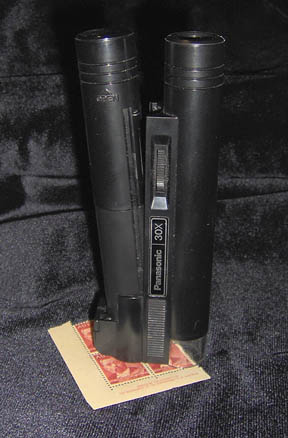 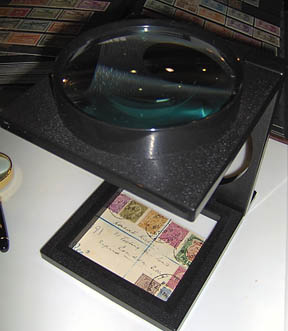 Figure 4. A large stand magnifier useful for side-by-side comparisons of stamps, or for viewing a cover under magnification. Click on image to enlarge.

Figure 3. The author's loupe that she carries to stamp shows. Click on image to enlarge.

Figure 2. A Crystal View magnifier, which uses a dome of lucite. Click on image to enlarge.

Figure 1. A simple magnifying glass with a convex lens. Click on image to enlarge.
Previous
Next

About 15 years ago, I was working on a plating study of some Tongan stamps.

A plating study compares identical-looking stamps with one another to see if minor printing differences occur in the same position in a sheet. This documents varieties that occurred in the plate from which the stamp was printed.

A plating study is tedious close-up work, and is not for everyone. In practically no time at all, I realized my eyes were not as good as they once were, even with my then newly acquired bifocals. Doing this plating study made me realize the importance of a really good magnifying glass or even stronger magnifying devices.

We are probably all familiar with the kinds of magnifying glasses that one frequently sees associated with Sherlock Holmes. That would be a convex round glass (or plastic) lens attached to a wooden, metal or plastic handle like the one shown in Figure 1.

Magnifying glasses can be purchased for next to nothing, but a good glass is not inexpensive. Cheap plastic ones are fine for occasionally delving into the local telephone directory, but as tools for a stamp collector they are practically useless.

In selecting a magnifier, it is not just the X number that is important. The quality of the lens can make a world of difference. When magnified, you want the stamp to be as crystal clear as possible. An inferior lens can make the stamp appear fuzzy, and that is not helpful when doing work that involves detail.

High-quality magnifying glasses are expensive. Some of the best made are used during medical procedures or in precision industrial applications and consist of two or three perfectly ground lenses sandwiched together. These might be overkill for stamp collectors, but once you see what they can do you will realize that the one you bought for $2 just isn't sufficient. Shop around and try several magnifiers before you buy.

You might want to choose a magnifying glass that has a light. These can be quite useful to illuminate the stamp you are trying to view up close, because the magnifier itself can sometimes block light from the field of view.

Many dealers who sell stamp collecting supplies carry ranges of magnifying glasses, and you might find what you need there. You can also check with drafting suppliers and dealers in scientific equipment.

One of my favorite sources is Edmund Scientific, 60 Pearce Ave., Tona-wanda, NY 14150. The company has a web site at www.scientificsonline.com. This outfitter carries a lot of products that stamp collectors would find useful, including all sorts of magnifiers. It is fun to look at all the supplies and equipment available.

The magnifying device I use most often is not one of the Sherlock Holmes type with a circular lens and a handle. My Crystal View magnifier that magnifies 4X is shown in Figure 2. This magnifier uses a dome of lucite for magnification. Its design allows light to collect through the top and sides, and it is perfect for examining and appreciating a single stamp.

The dome has a flat bottom that sits directly on the stamp that is to be magnified. When not in use, it has a wooden base that helps protect it from scratches. These are available from a number of sources, including Amos Advantage, where Linn'ssubscribers receive a discount. Write to Amos Advantage, Box 828, Sidney, OH 45385-0828; or visit www.amosadvantage.com.

I also have a loupe, shown in Figure 3, that I take with me to stamp shows. It is a neat little package that slips easily into a purse or pocket with an excellent two-lens system that folds into itself.

The only problem is that it blocks a good deal of light, so it doesn't work as well in the dark corners of a stamp show.

I also have a very large stand magnifier, shown in Figure 4, that I acquired several years ago at a drafting supply shop. This has a heavy, large lens that sits at an optimal fixed distance above the object you wish to view under magnification.

It allows me to view several stamps under magnification simultaneously, or an entire cover. It is great for making comparisons by viewing stamps side by side. There is some distortion around the edges, but it is still a useful tool.

When I was working on the plating study, I found I really needed magnification greater than I could get from any of these magnifying devices.

That's when I discovered the small, lighted monocular microscope with 30X magnification shown in Figure 5. Only a small portion of a stamp may be viewed at a time, but that view is bright and clear, thus enabling the observation of fine details necessary for plating stamps.

The one I have is a Panasonic and was fairly expensive, but I have seen similar devices from other brands for about $30, including several in the Edmund Scientific catalog.

You should invest in a good magnifier. Being able to see the crisp details of line-engraved stamps is a delight. Seeing how tiny dots of color form together to make a colorful stamp printed by lithography is amazing.