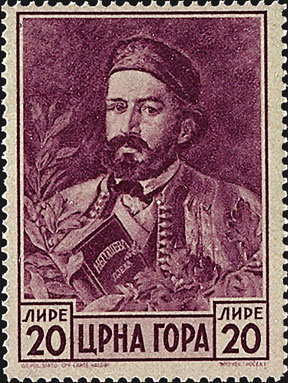 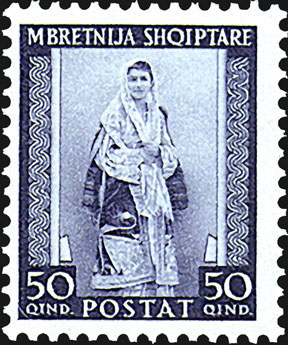 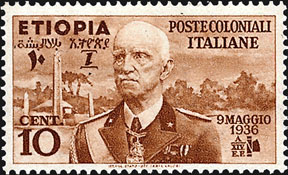 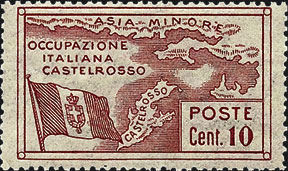 Figure 4. A Castellorizo 10-centesimo Map of Castellorizo and Flag of Italy stamp (Scott 61). Click on image to enlarge. 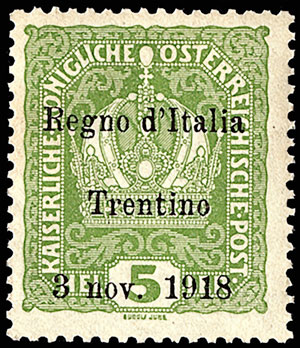 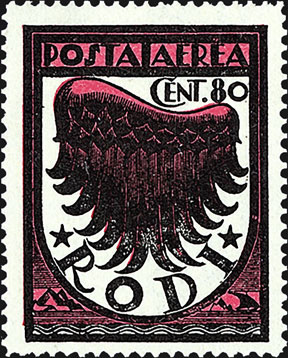 Figure 2. The 80-centesimo airmail stamp from Rhodes shows a symbol of flight (Scott C2a). Click on image to enlarge. 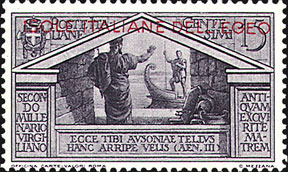 Figure 1. Italy's 15-centesimo Helenus and Aeneas stamp overprinted for use in the Aegean Islands (Italy-Aegean Islands Scott 3). Click on image to enlarge.
Previous
Next

The 20th century was the bloodiest in human history. For every million killed in battle in the 20th century, another 10 million died in gulags, death camps and political upheaval. This history can be traced through postage stamps.

Thumb through any volume of the Scott Standard Postage Stamp Catalogue and you will find stamps of one country issued by another country occupying it. These are called occupation stamps. Sorting out occupation-related stamps can be quite confusing.

Italy's strategic importance in Europe cannot be denied. The Italian Peninsula literally and figuratively sticks its toe into the Mediterranean Sea, plants its instep in the Ionian Sea and digs its heel into the Adriatic Sea. A couple of thousand miles of coastline offer anchorage to ships and landing areas for troops. Italy's northern borders bump up against France, Switzerland, Austria and Slovenia. When war erupted in Europe during the 20th century, sooner or later Italy was going to become involved.

In the back-of-the-book section following the listing for regular Italian postage stamps in the Scott standard catalog are found stamps that were overprinted "Egeo" and "Isole Italiane dell' Egeo" for use in the Aegean (Dodecanese) Islands. Italy seized these Greek-inhabited islands from the Ottoman Empire during the Italo-Turkish War of 1911-12.

An Italian 15-centesimo Helenus and Aeneas stamp overprinted for use in the Aegean Islands (Italy-Aegean Islands Scott 3) is shown in Figure 1.

Those stamps also appear in the Aegean Islands section of the Italian listings. While none of these stamps are classified as occupation stamps by the Scott catalog editors, that is really what they are.

The stamps of Rhodes are arguably the most strikingly attractive of the group. A Rhodes 80-centesimo Symbol of Flight airmail stamp (Scott C2a) is shown in Figure 2.

Despite a prewar alliance with the Central Powers, Italy entered World War I in May 1915 on the side of the Allies. This was primarily an attempt to acquire Italian-populated territory, known as Italia Irredenta (unredeemed Italy) controlled by Austria-Hungary.

The Italian front was the scene of some of the bitterest fighting of the war. Repeated Italian offensives made little progress at great expense, and Austro-Hungarian and German armies later surged across the border in a counteroffensive that drove deep into Italian territory.

Despite its setbacks on the battlefield, Italy was on the winning side of the war. After the collapse of Austria-Hungary, Italy occupied and issued stamps for Venezia Giulia, Trieste and Trentino (South Tyrol) and part of Dalmatia on the Adriatic Coast.

Unlike the stamps issued for the Aegean Islands, the Scott editors do classify the Venezia Giulia and Trentino stamps as occupation issues, so they are listed under Austria and their catalog numbers are prefixed with the letter "N." The occupation stamps were replaced by Italian stamps in 1919.

The peace settlements that ended WWI starkly divided Europe between winners and losers. The years between the wars were marked by rising nationalism and irredentism, as the losers sought to recover what they had lost, while the winners struggled to hold onto what they had gained.

Although it had been on the winning side in WWI, Italy was at the forefront of those trying to redraw the maps between the wars. Both Italy's Fascist government led by dictator Benito Mussolini, and its king, Victor Emmanuel III, were eager to restore the glory of the ancient Roman empire.

During WWI, France had seized the Greek-inhabited Mediterranean island of Castellorizo (Kastelorizo), from the Ottoman empire. Although the islanders had petitioned the Italian government for annexation during the Italo-Turkish War, the Italians had refused at that time. After WWI, the island was awarded to Italy on March 1, 1921. Italy began to issue stamps for the island in 1922. A 10-centesimo Map of Castellorizo and Flag of Italy stamp (Castellorizo Scott 61) is shown in Figure 4.

In 1936, Italy expanded its empire in Africa by conquering the kingdom of Ethiopia. The Italians were embarrassed by the stiff fight they encountered, but in the end the Ethiopians proved no match for Italy's modern arms and equipment. A 10-centimo Emperor Victor Emmanuel III occupation stamp (Ethiopia Scott N1) is shown in Figure 5.

In April 1939, Italy launched a massive invasion of Albania across the Adriatic Sea. Albania surrendered without a fight, as King Zog fled with his wife and newborn son just ahead of the invaders.

Victor Emmanuel III was declared king of Albania, and stamps were issued by Italian authorities. Curiously, the Scott standard catalog lists these as regular postage rather than occupation stamps.