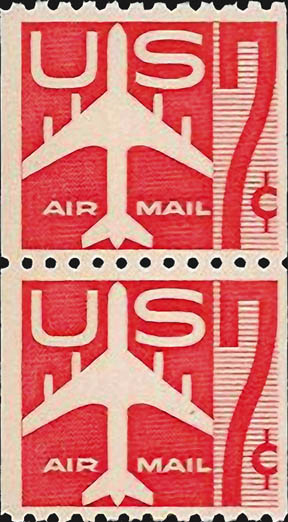 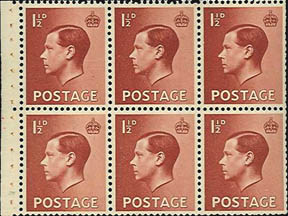 Figure 3. Some stamps are issued in booklet format. This is a booklet pane of the British 1½-penny King Edward VIII stamps (Scott 232a). Click on image to enlarge. 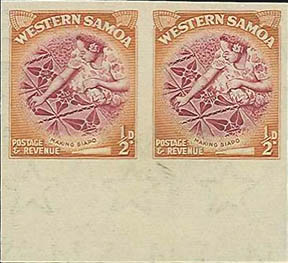 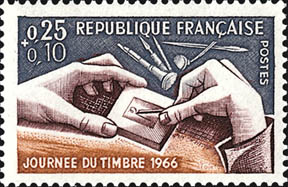 Figure 1. A French 25-centime+10c semipostal stamp (Scott B400) shows the hands of an engraver working on a stamp die. Click on image to enlarge.
Previous
Next

Recording artists who have one gigantic No. 1 hit and are never heard from again are referred to as one-hit wonders.

There are stamp collectors who specialize in one stamp. These collectors delve into every aspect of the stamp: the inception of the design, the production of the printing plates, printing and perforating the paper, and the stamp's usage.

It is easy to get a flavor for what it is like to assemble a one-stamp collection. Pick your favorite stamp and see how far you can take it beyond the one or two examples you already have in your collection. Do not try to do this with a stamp you can't bear to look at, or you will soon resent the time and money you invest in the project.

Begin by learning as much as you can about the stamp. This is made easier by the American Philatelic Research Library's card catalog available online at www.stamplibrary.org.

You can discover what books, catalogs and articles exist for your stamp. Borrow those publications and read them to learn what exists for the stamp.

Postage stamps are issued to prepay the costs for the service to send mail from point A to point B. But your stamp might have been issued for a particular rate or fee for a specific service, such as special delivery, registration or airmail. The more you learn, the more you will appreciate your stamp.

Recently, graphic design teams have been responsible for elements that, when combined, make up a stamp's design.

You can explore whether or not any preliminary design work, unadopted designs called essays, or other preproduction material exists for your stamp.

Such items are sought by collectors and may be quite expensive, if available. You may decide you don't want to spend the money to acquire such pieces, but it is nice to know what is available. Who knows? You might stumble upon something at a price you can afford, but you first have to know what to look for to find the bargains.

If a stamp was recess-printed, an artisan called an engraver probably created a die from which printing plates were made.

The French 25-centime+10c semipostal stamp (Scott B400) in Figure 1 shows the hands an engraver working on a die for a stamp.

In this multistep process, proofs usually are taken from the dies and plates as progress is made. A proof is a trial impression from a die or printing plate created before stamp production begins. Proofs are used to examine a die or plate for defects or to compare the results of using different inks. Proofs generally are imperforate and are often made on cardstock or thick paper.

Sometimes, as a printer experiments with finding the best colors for a stamp, proofs are made in colors not used for the finished stamp. These are called trial color proofs.

A plate proof is an impression taken from a printing plate, or part of the plate, before printing is started. A plate proof pair of the Samoan ½-penny Making Siapo Cloth stamp (Scott 203) is shown in Figure 2.

In addition to recess, other printing processes, such as lithography and typography, may produce proof images or other types of archival material. You can choose to collect these items or not, depending on availability and your willingness to spend the money.

The technical aspects of stamp production include the kind of paper on which it was printed. A surprising number of paper types have been used for stamps, and stamps of the same design have sometimes been issued on several different types of paper.

Many stamps have been produced on watermarked paper. Face-same stamps with different watermarks are considered to be different stamps.

Perforations are another technical aspect. Face-same stamps often are issued with different gauges of perforation. To correctly identify them, you must measure the gauge of the perforations with a tool called a perforation gauge.

Gum is a technical detail, too. In recent years, many stamps are self-adhesive, produced on peelable backing paper. Most earlier stamps were printed with moisture-activated gum. Gum condition can have a great impact on a stamp's value.

Minor varieties of many stamps exist. Major errors in production have resulted in missing colors, missing perforations and parts of the design missing or inverted.

Stamps are printed in sheets that are usually divided into panes before being sent to post offices for sale. Some stamps are issued in booklet formats. A booklet pane of the British 1½-penny King Edward VIII stamps (Scott 232a) is shown in Figure 3.

Other stamps are produced in long coils for use in vending or affixing machines. Figure 4 pictures a vertical pair of United States 7¢ Silhouette of Jet Airliner airmail coil stamps (Scott C61). Stamps in multiple formats give collectors all the more to seek.

When was the stamp issued? Most modern U.S. stamps are released with a lot of fanfare. Commemorative stamps have first-day-of-issue ceremonies and cancels. Collectors prepare cacheted covers to which the stamp and the first-day cancel are applied. These are known as first-day covers or FDCs.

Older stamps, especially those of the 19th-century, often went into service on whatever day they arrived at the post office. Finding the earliest documented use for an older issue can be quite a challenge.

A one-stamp collection can be as simple or as complex as you want. If it is a stamp you love, making a specialized collection of it can be enormously satisfying.