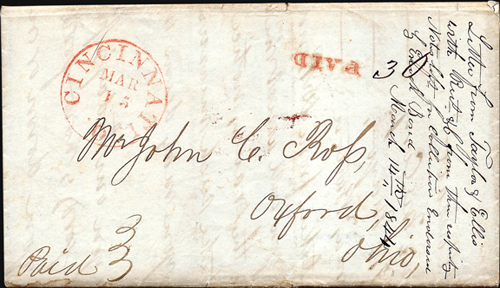 Figure 2. A folded stampless letter mailed March 15, 1844, from Cincinatti, Ohio, to Oxford, Ohio. This letter was assessed 30¢ in postage based on weight and distance traveled. 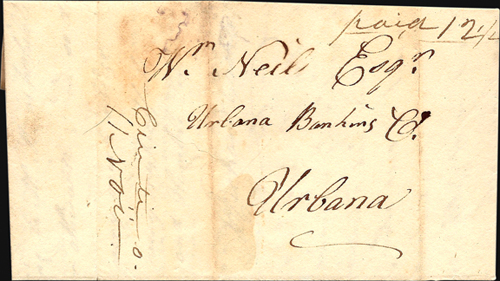 Figure 1. A stampless folded letter mailed Nov. 5, 1816, from Cincinnati, Ohio, to Urbana, Ohio. The letter was assessed a postage fee of 12½¢ based on weight and the distance it would travel.
Previous
Next

Although revenue stamps had been around for quite a while, adhesive postage stamps did not come on the scene until Great Britain issued the first stamp, the Penny Black, on May 6, 1840.

But people were writing and mailing letters long before there were postage stamps available to show prepayment of postage.

In those prestamp days, letters were written on one or more lettersheets that were folded and sealed with a wax wafer or sealing wax. Before 1845, most envelopes were handmade, fairly expensive and not widely available. Inexpensive, machine-made envelopes for enclosing letters did not become widely available until the latter half of the 19th century. Before that, folded letter sheets were the norm.

The address of the person to whom the letter was being sent was written on the opposite side from the seal.

The folded letter was taken to the post office where a clerk would determine how many lettersheets were used or how much the letter weighed and how far the letter was going. The postage assessed was based on the weight (number of sheets) and distance.

The amount of postage required to mail a letter was written by the clerk on the front of the folded letter. There was usually a handwritten or handstamped postmark that was also applied. This gave the place and date of mailing. All of that weighing and figuring out the distance and postal rate took a lot of the clerk's time.

The cost of postage prior to the 1840s was extremely expensive. For example, the letter shown in Figure 1 was sent from Cincinnati, Ohio, on Nov. 11. This is written sideways on the front of the folded letter and serves as the postmark.

To find out the year of mailing, the letter needs to be opened. This is a job that requires gentle handling. This piece is nearly 200 years old and has become brittle. The letter, fully contained inside, is dated Nov. 5, 1816, when the city of Cincinnati was just 28 years old.

This single-page letter was signed by Richard Gaines, who was a Cincinnati attorney. It was sent to another attorney in Urbana, Ohio, a distance of about 135 miles.

In 1816, the rate for a single-weight letter sent 80 miles to 150 miles was 12½¢. That is why "12½" is written in the upper right corner. According to the Measuring Worth web site at www.measuringworth.com/ppowerus, that 12½¢ would have the purchasing power of about $2 in today's money.

The word "Paid" is written next to the rate, indicating that this folded letter was prepaid by the sender and no money was to be collected from the recipient.

The unwieldy way of determining the proper rate was compounded because, in most cases, the cost of mailing a letter was borne by the recipient and not the sender. This was yet another inefficiency. A letter could be transported from one place to another without any money being paid for the service. Once the letter got to its destination, if the recipient was unable to pay, the cost of handling and transporting the letter was still borne by the post office, with no payment to offset those costs in the end.

Now compare the folded letter in Figure 1 to the one shown in Figure 2. Do you see the rate? It is the "30" in the upper right corner, written in ink. Right next to it, in an inverted position, the word "PAID" is handstamped in red ink. The word "Paid" was also handwritten at the bottom left, thus assuring that no attempt would be made to collect postage from the recipient.

The letter itself consists of a handwritten sheet and a sheet printed on both sides containing wholesale prices for produce, groceries, drugs and rates of exchange in Cincinnati on March 14, 1844. It is a fascinating glimpse into the commercial world of 1844.

So now we have determined the postal rate of 30¢ was charged for this letter in 1844. The distance between Cincinnati, the place of origin, and Oxford, Ohio, the destination, is not great – about 35 miles. The rate for a single-weight letter for distances between 30 miles and 80 miles was 10¢.

The contents just described comprised two sheets, a double weight, so how do these clues amount to 30¢?

The writing going down the right side, called docketing, explains the missing piece to the puzzle. The writing says what the contents are: "Letter from Taylor & Ellis with [unknown words] from them [unknown word] Notes left for collection enclosed by Enoch Bond."

There were no "notes left for collection" enclosed within the folded letter when I received it, so we can assume there was at least the equivalent of an additional sheet or sheets of paper that brought the rate to 30¢. That 1844 30¢ fee would have the purchasing power of $8.88 in today's money.

Great Britain's postal reform that began in 1839 substantially lowered postal rates to a uniform 1 penny for a single letter in 1840. Just as the postal reformer Sir Rowland Hill predicted, the lower rates increased business. Postal clerks no longer had to figure out distances and weights and thus the entire mail process was expedited.

The reforms worked so well in Great Britain that other countries followed suit. In 1845 the United Stated lowered domestic postal rates and simplified them to 5¢ for single letters sent under 300 miles and 10¢ for single letters over 300 miles. These rates are reflected in the first two adhesive postage stamps issued by the United States in 1847: the 5¢ Benjamin Franklin stamp and the 10¢ George Washington stamp (Scott 1-2).

The three-volume catalog published by David G. Phillips is no longer in print. Several years ago the U.S. Philatelic Classics Society obtained the rights to the catalog and hopes to publish an updated version in the future.

Collecting stampless mail is fascinating. You get a lot of bang for your stamp collecting buck.

There is the fun of deciphering the rates, routes and mode of delivery. With the letter contained within, there is also the joy of reading about life in the mid-19th century or earlier.

These old letters constitute fascinating everyday history that you can hold in your hand.