Be considerate of future owners: don't write on stamps and covers

Figure 4. A 1946 registered official cover from Ceylon with markings added in pen by a collector noting a spelling characteristic. 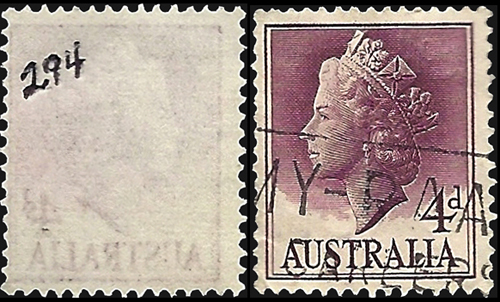 Figure 2. A ballpoint pen was used to write on the back of this Australian Queen Elizabeth II stamp. The pen pressure created embossing that can be seen on the front in the upper right. 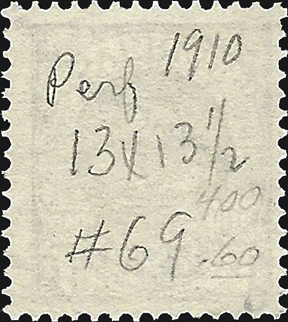 Figure 3. The back of a Swedish stamp that has a lengthy description written on it. 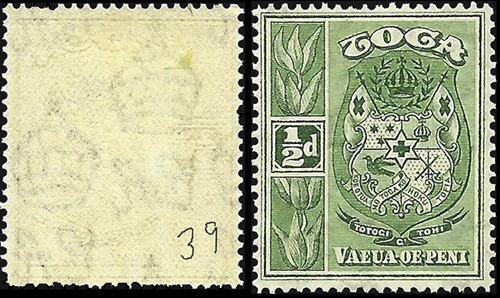 Figure 1. This stamp from Tonga was incorrectly identified with writing on the reverse of the stamp. Both sides are shown.
Previous
Next

Unless you collect only new issues acquired directly from the issuing postal administration, the stamps in your collection are previously owned. Depending on how old the stamps are, there might have been a dozen or more owners before you.

We are merely temporary curators of the stamps in our collection. If we take good care of them, another generation of collectors will be able to collect and enjoy them at a later date.

Caring for the stamps you have collected is not difficult.

Common-sense practices, such as careful storage in albums or stock books, are the first lines of defense in making certain stamps will not become damaged.

Storing albums upright, as well as keeping them out of direct sunlight and away from humidity and broad temperature swings, will help assure the stamps stay in good condition.

Avoid picking up bad habits. One of the most annoying and pervasive habits is writing on the backs of stamps.

Writing on the back of a stamp makes no sense. Dozens of different stamp catalogs are published all over the world. Which catalog was used to determine the catalog number?

Also, catalog numbers have been known to change over time, and catalog values change frequently. The collector who wrote the catalog number on the back of the stamp may not have correctly identified the stamp, and the number could be wrong.

Figure 1 shows a stamp from Tonga that was incorrectly identified on the reverse as Scott 39, a ½-penny green Coat of Arms stamp with the turtles watermark. The stamp is actually Scott 73 with a multiple crown and script CA watermark.

Pencil marks on the reverse of a stamp create additional problems. If it is a used stamp, a light pencil mark might be removable using a soft eraser, but there is a great risk of creating a thin in the paper from rubbing the eraser back and forth in one place.

Attempting to erase writing on the back of a stamp can lead to bent corners and tears. Troublesome though they may be, leaving the pencil marks alone is probably the best way to keep the stamp in reasonably good condition.

If light pencil marks are annoying, imagine what a ballpoint pen can do to a stamp. Many years ago, I purchased a stamp lot sight unseen from a mail-order dealer. Every stamp in the lot had a catalog number written with ballpoint pen, and, to make it even worse, the collector who wrote the numbers used so much pressure that the numbers were embossed into the stamp.

I returned the lot for a refund, but recreated the effect on the stamp illustrated in Figure 2, the Australia Queen Elizabeth 4-penny stamp (Scott 294) issued in 1957. The image should show the embossing from the pen pressure at top right on the front of the stamp.

Collectors of mint stamps would not want writing on the back of that otherwise fresh gum, and yet it is surprising at how often you see an otherwise mint never-hinged stamp with writing on top of the gum. The pencil marks are nearly impossible to remove, and the attempt to do so will leave a mint stamp with disturbed gum.

Even worse than a catalog number is a lengthy description written on the reverse of a stamp. The amount of writing on the Swedish stamp shown in Figure 3 is almost comical. A prior owner must have spent a lot of time working on the varieties and did not want to get them confused. The information that was written on the stamp might have been better placed on the album page in the space where the stamp was mounted.

I occasionally receive letters and e-mails from collectors voicing dissatisfaction with dealers who write values using pencil on the front of covers they sell. If this annoys you, it is best to discuss it directly with the dealer.

Encourage the dealer to use glassines or Mylar sleeves and to put the price on the outer covering.

Once you have acquired a nice cover I implore you to avoid writing anything on it. This may sound like elementary advice, but there are collectors who seem to enjoy pointing out significant points on a cover and recording them for posterity.

A former owner felt the need to draw attention to the town name that had a different spelling in the postmark than on the registration label.

Arrows, circles and underlines emphasize the added text: "Note the spelling with the postal mark." An otherwise desirable cover with an uncommon "M.O. & S.B." (money order & savings bank) postmark was instantly and permanently made less desirable with the addition of a few pen strokes.

One of the easiest and best things you can do to help the hobby prosper well into the future is to take personal responsibility for the care of your collection.

Realize that your collection will someday become another person's pride and joy. Take proper care of it for your own enjoyment now and for the collectors in the future.