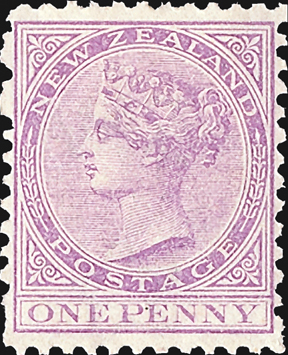 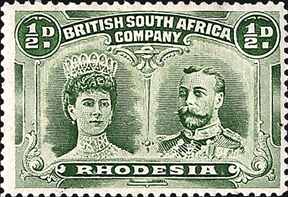 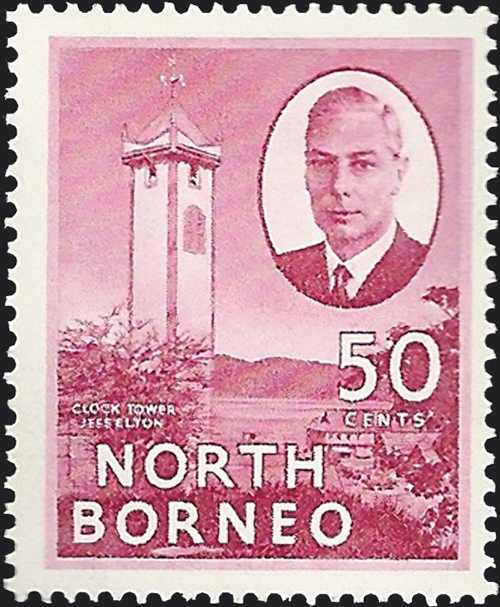 Printed stamp albums and stamp catalogs sometimes include wording that can stop a collector in his tracks. I had just such an experience recently when I was mounting some North Borneo stamps in my album.

The 50¢ cerise stamp shown in Figure 1 fit the clock tower description, but I didn't know which space was the correct one for it. The album indicated that one version was redrawn, but the differences between the two versions were not mentioned.

I could have mounted the stamp onto one of the spaces knowing that I had a 50-50 chance of getting it right. Those are good odds, but I hate putting stamps in the wrong space in an album. And mounting it without taking the time to learn why the stamp was redrawn was a wasted opportunity.

It was time to consult the Scott Standard Postage Stamp Catalogue. The catalog describes the original stamp (Scott 254) as "50c cer Jessleton," while the redrawn version is described as "50c cer Jesselton."

Jesselton is the former name of the capital of Sabah, formerly North Borneo. To put it more concisely, Jesselton, North Borneo, is now known as Kota Kinabalu, Sabah.

The stamp shown in Figure 1 reads "Jesselton" and thus it is Scott 259, the redrawn stamp of 1952. It now rests in the proper place in my album.

There are many good reasons to take the time to put stamps in the right places when mounting them in albums. The aesthetics of the page play a role. Stamps that are mounted artfully are a pleasure to look at and bring joy to the collector.

But there also are sound financial reasons for making certain that stamps are mounted where they belong.

Using the lookalike North Borneo 50c cerise Jessleton/Jesselton stamps as an example, suppose you purchased for $5 a mint never-hinged example of what you believed was Scott 259. You get it home, plunk it on the space for Scott 259 in the album, and, then years later, you get ready to sell the collection.

A dealer begins thumbing through the album and notices that Scott 259 is really Scott 254, and then checks other stamps more thoroughly.

Multiply that difference by hundreds or thousands of stamps that have been identified incorrectly and mounted in the wrong spaces in the album and you can see that a dealer contemplating the purchase of your collection will offer much less money than you anticipated. Why? Because you failed to perform due diligence in mounting the collection.

It pays to be careful. The North Borneo stamp is an inexpensive example of what can happen.

Similar stamps of far greater value are even more likely to be mounted incorrectly. The more careful you are, the better your collection will be.

Another downfall for some collectors is the lack of interest or ability to identify paper types, watermarks or determine the gauge of perforations.

Other stamps in the set have even more spectacular differences in catalog value depending on the gauge of perforations.

For a minimal outlay of a few dollars, you can purchase a perforation gauge. It takes a little practice to learn how to use it, but the payoff can be enormous.

A watermark is a pattern within the paper that is created during the manufacturing of the paper. You often can see a watermark in stamp paper by merely turning the stamp face down and viewing it on a dark background.

For some stamps, though, assistance is needed to see the watermark. This assistance comes in the form of watermark fluid that is specially formulated to not harm a stamp.

The stamp to be watermarked is placed face down in a black plastic, glass or ceramic tray, and a drop or two of watermark fluid is applied. The watermark will show up as a darker pattern on the back of the stamp. The watermark can then be identified by comparing it to illustrations in a stamp catalog.

The stamp was printed on paper watermarked with "NZ" and a star set well apart from the "NZ." The stamp has a catalog value of $100 mint and $5.75 used.

The same design was printed again in the same color in 1875, but this time on paper that had a large six-pointed star watermark. This stamp, Scott 57, catalogs $1,400 mint and $200 used.

Spend quality time with your collection. Put stamps in the proper spaces in your albums.

It pays off in the long run.