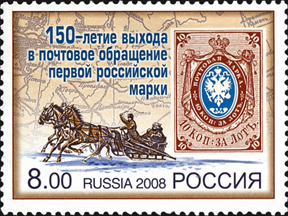 Figure 9. The 150th anniversary of the first Russian stamp was commemorated in 2008 with the issuance of a stamp-on-stamp design (Scott 7057).

Figure 8. The Apollo-Soyuz mission resulted in stamps issued jointly by the USSR and the United States. This is one of the Russian stamps (Scott 4339). 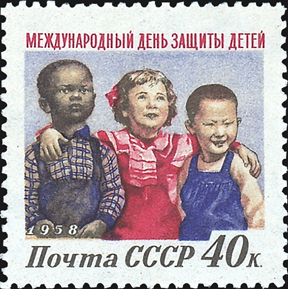 Figure 7. Three children of different races stand together for the International Day for the Protection of Children on this 1958 stamp (Scott 2070). 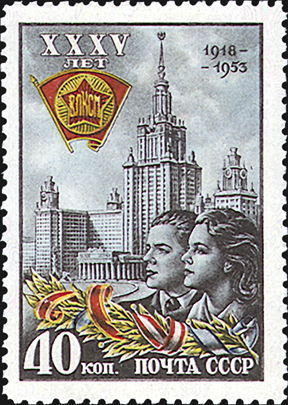 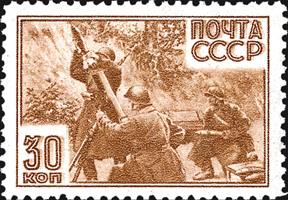 Figure 5. Russian soldiers firing mortar rounds from a trench during World War II, as depicted on a 1943 stamp (Scott 891). 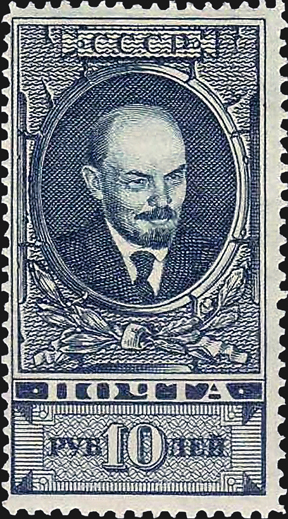 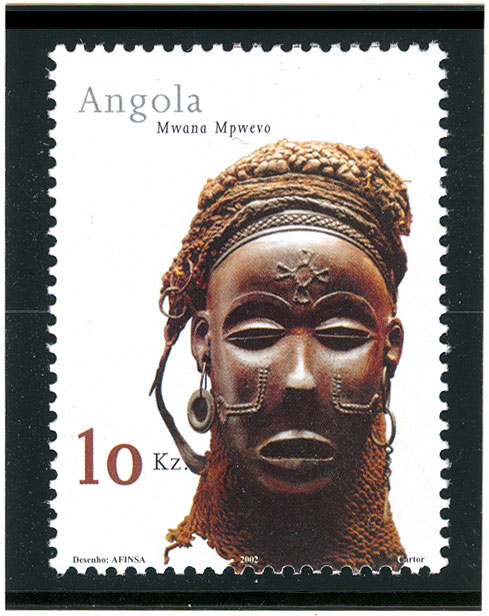 Figure 3. The Russian Soviet Federated Socialist Republic was represented in 1918 with a stamp (Scott 149) showing a sword breaking the chains of Imperial bondage. 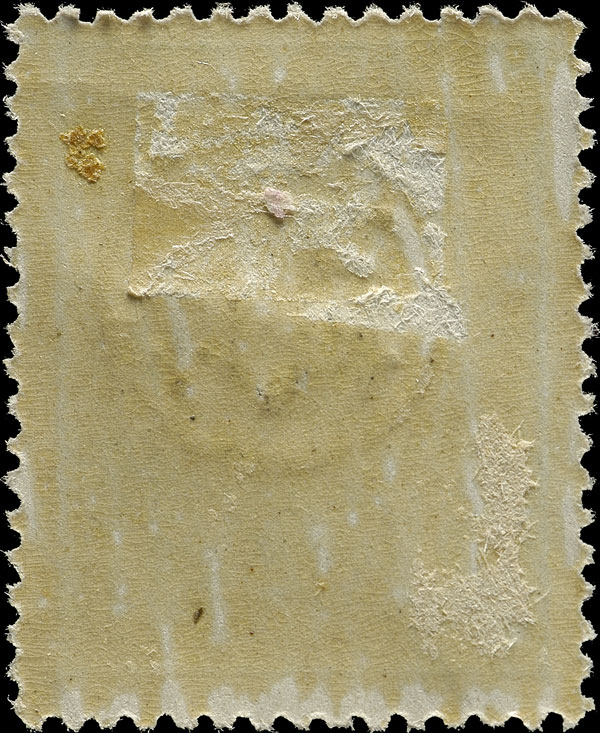 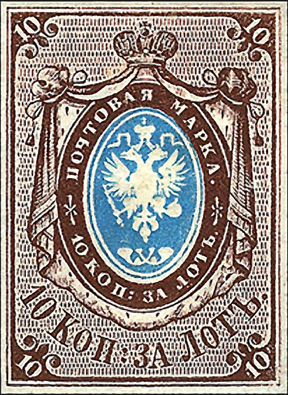 Sometimes it is fun to grab an album or stock book and just thumb through it, admiring the stamps as you go along. Some of the stamps will trigger a memory; others might make you wonder why the stamp was issued or what it depicts.

Today I grabbed an album off the shelf, opened it to a random location and landed in Russia.

Who says you can't travel around the world with your stamp collection? We can do that every day and never have to succumb to airport security or jet lag. And you don't need a passport, a visa or an interpreter.

But what about those Russian stamps? To understate the obvious, there are a lot of them. Some are delightfully simple, and others can be complicated to collect, with varieties of watermarks, papers, perforations, designs and overprints – even overprinting of varnish.

Add to that the complexity of Russia's history. When the first stamps were issued in 1857, Russia was an empire ruled by a czar, Alexander II, and the stamps bore the imperial coat of arms, as shown on the 10-kopeck brown and blue in Figure (Scott 1).

In addition to being the Russian czar, Nicholas II's official title included "Emperor and Autocrat of All the Russias." He was also the grand duke of Finland and king of Poland.

Nicholas and his wife Alexandra had strong ties to the British monarchy, as both were first cousins to King George V. There was a strong family resemblance between Nicholas and George V. All of the Romanov Dynasty of imperial Russian czars were shown on a series of Russian stamps in 1913. Figure 2 shows the 10kop stamp for Nicholas II (Scott 93).

Nicholas II's reign was turbulent. In 1904, Russia was at war with Japan. In 1905, there was a revolution in Russia that undermined the imperial government. From 1903 to 1906, the Russian Empire saw anti-Jewish riots known as pograms. In 1914, Russia entered World War I, allied with Britain and France against Germany and Austria-Hungary.

The war did not go in Nicholas' favor. The czar abdicated in 1917 and was executed, along with his entire family, in 1918.

The bleak days of 1917 resulted in another revolution. Vladimir Ilyich Lenin gained power and by 1918 there was a civil war. The remarkable 35kop stamp shown in Figure 3 (Scott 149) is a good representation of this period in Russia's history.

The Union of Soviet Socialists Republics (USSR), also known as the Soviet Union, was established in December 1922, with its capital in Moscow.

The first premier of the Soviet Union was Lenin, who died a short three years later after suffering a massive stroke.

The USSR honored Lenin with memorial stamps in July 1925. Two stamps were issued denominated 5 rubles and 10rub. The 10rub indigo stamp is shown in Figure 4 (Scott 303).

These two stamps can each be collected in three perforation varieties; with gauge 13½ perforations for the regular issue and in gauges 12½ and 10½.

For the next 70 years, the stamps of the USSR illustrated the dreams and desires of the Soviet Union. The earliest stamps promoted the social progress of the new regime. In the late 1930s, when the winds of war were blowing across Europe, the USSR began showing its military might on its stamps.

In 1941, Germany violated a nonaggression pact and invaded the Soviet Union, which was one of the so-called Big Three Allied nations, along with Great Britain and the United States.

Conditions were austere in the Soviet Union, but stamps kept coming that highlighted the military and sacrifices being made for the homeland.

The Soviet Union's military actions in World War II were boldly depicted on stamps during the worst of the fighting.

Figure 5 shows a 30kop stamp (Scott 891) issued by the USSR in 1943 during some of the bleakest days of the war. It shows soldiers in a trench firing mortar at the enemy.

With the fighting war over in 1945, the world entered into a new kind of conflict that became known as the Cold War.

The USSR's stamp program became heavily patriotic, showing off its military might and promoting its culture, its heroes, its prowess at sports and its dedication to the arts.

The stamps are largely dark and gloomy at first glance, but if you take the time to look carefully at them, you get a sense of what life in the USSR was like, and what Russians wanted to say about themselves.

Figure 6 shows a 40kop stamp from 1953 that depicts two young people looking toward the future in front of Moscow University (Scott 1674), to mark the 35th anniversary of the Young Communist League.

In the mid-1950s, stamps from the Soviet Union became less dreary and more colorful. One of the USSR's most touching stamps is shown in Figure 7 (Scott 2070). Issued in 1958, the 40kop stamp depicts three children of different races to commemorate the International Day for the Protection of Children.

A space race was going on between the Soviet Union and the United States. The Soviets won the stamp space race when compared in numbers to those issued by the United States, but in 1975 the space race came to an amicable conclusion with the successful USA-USSR Apollo-Soyuz joint mission, dually commemorated with the issuance of stamps from both nations.

Figure 8 shows the 12kop Soviet version of the Apollo-Soyuz of the joint issue (Scott 4339).

On Christmas Day 1991, the Union of Soviet Socialist Republics disbanded. Russia was an independent republic, no longer part of a union of states.

Other former Soviet states also became independent. Several of what stamp collectors call dead countries – countries that have stopped issuing stamps — were back in business. Nations such as Azerbaijan and Latvia began issuing their own stamps following decades of philatelic inactivity.

The "CCCP" inscription that symbolized the stamps of the Soviet Union was replaced with the name Rossija on Russian stamps.

In 2008, Russia issued an 8rub stamp, shown in Figure 9, to celebrate the 150th anniversary of Russian stamps (Scott 7057). The design includes the first Russian stamp, which was pictured here in Figure 1.