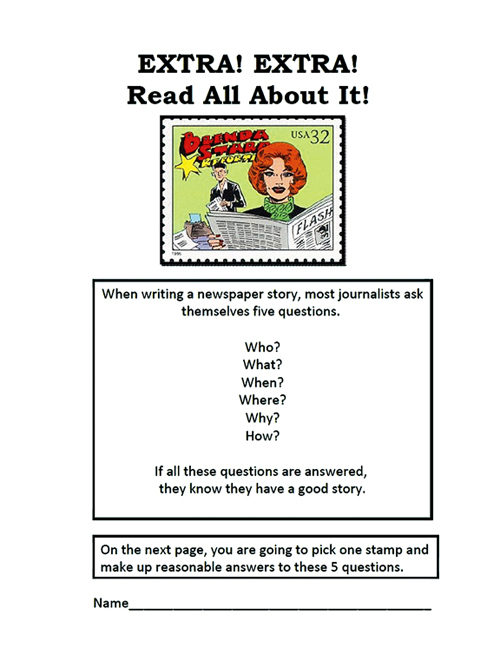 Figure 3. A Stamps Teach worksheet about writing a newspaper story. 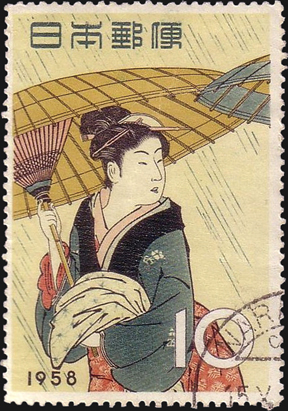 Figure. 2. Used example of a Japanese stamp (Scott 646) issued during Stamp Week 1958 that illustrates a woodcut by Kiyonaga. 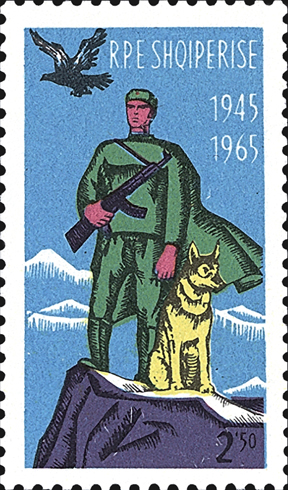 Figure 1. A 1965 Albanian stamp (Scott 807) showing a frontier guard and dog.
Previous
Next

When stamp collectors gather and begin discussing their earliest days as stamp-collecting youngsters, the conversation will inevitably turn to how much each person learned through the hobby.

Stamps are superb little teachers of geography, history, sociology and fine art. Pick any subject and there are stamps standing in line waiting to teach you something about it.

Suppose you know a child who has a beautiful, loving German shepherd dog. You hand that child the stamp shown in Figure 1 that has a striking image of a soldier and a German shepherd.

The child points to the dog and says, "that's my dog!"

You smile and explain that it is a guard dog that is helping the soldier on the stamp.

Then you can begin to talk about where the stamp is from.

This is tougher than usual, because the country name is in the Albanian language, so you have to investigate that by searching in a catalog, an encyclopedia or on the Internet. This takes time, and discovering the answer to the "Where is it from" question leads to more questions.

Where is Albania? You refer to an atlas and search for it on a map. You find Albania right next to the Adriatic Sea, northwest of Greece.

It looks as though there are a lot of mountains, which are indicated on the stamp, but where is the frontier and why did it need to be guarded?

You tell the child that you both are stamp detectives looking for clues.

It is now a fun game, and by the time you have answered all the questions this stamp provokes, you and the child with the dog have learned geography, history and perhaps have gained an appreciation of poster-style art.

It is a lot to learn from just a single stamp, and because you spent quality time playing stamp detective with a child, these are lessons you will both remember.

What do you remember from when you were eight years old? If you are like me, probably not a lot. But I do have one vivid memory from when I was eight, and that memory is there because of a postage stamp.

By the time I was eight, I had already been collecting stamps for two years. It was difficult for me to get stamps for my collection, so I was always nagging relatives, friend's parents and neighbors to save stamps for me.

My mother's best friend had a cousin who, I was told, lived in California and got a lot of mail. My mother's friend was going to ask her if she would send me some stamps.

One day a parcel arrived for me. I remember it perfectly. It was wrapped in brown paper and tied with string, back in the days when it was permissible to tie string around a mailed package.

The stamps on the parcel were postmarked California. Once the wrapping was removed I pulled the lid off a shirt box and the first thing I saw was a photograph of a pretty lady.

It was signed, "Fondly, Doris Day."

Beneath the photo was the largest pile of postage stamps I had ever seen in one place. I pawed through the stamps slowly, carefully and eventually found one from Japan, shown in Figure 2. That 1958 Woman with Umbrella stamp (Scott 646) became my favorite stamp then and now.

That box of stamps, sent by a thoughtful, successful, extraordinarily busy woman who just happened to hold the record of top female box office movie star of all time, changed my life. I had the entire world in my hands, removed – almost certainly by staff – from sacks of fan mail.

What did that Japanese stamp teach me?

And, in reflection, the whole box of stamps taught me that if someone with the fame and success of Doris Day can make time to send stamps to a little girl in her old hometown of Cincinnati, Ohio, then I should learn that spirit of generosity, too.

Who would have thought that stamps could teach a lesson like that?

The American Philatelic Society, in partnership with the Smithsonian National Postal Museum's Council of Philatelists and with assistance from the American Stamp Dealers Association, has launched a pilot program that uses stamps in classrooms throughout the United States. The second phase of the pilot program is now underway, the first phase having been completed this past June.

The 100 teachers involved used stamps, lesson plans, worksheets, activity cards and a learning center provided by the APS at no cost to the teachers. In return, teachers provided feedback once they had used the materials.

The response was nothing short of spectacular.

One of the worksheets, this one a lesson on writing a story for a newspaper, is shown in Figure 3.

Phase 2 is up and running and it needs your help.

If you know a teacher for grades 3 through 5, tell them about the free classroom materials they can receive by participating in the Stamps Teach pilot program.

Stamps Teach also needs some educators who will write or review lesson plans.

Going forward, Stamps Teach will be seeking grants to expand and provide stamps in as many classrooms that will accept them.

Can you help? If you can, contact APS Director of Education Gretchen Moody at 100 Match Factory Place, Bellefonte, PA 16823; or e-mail Gretchen@stamps.org.

Visit the web site for more information and to see the lesson plans that are in the hopper vwww.stamps.org/Stamps-Teach.

Wouldn't it be amazing if every child in the United States had the opportunity we all had to learn from stamps?