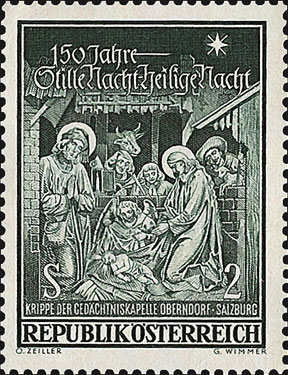 Figure 7. The creche at the Silent Night Memorial Chapel is shown on Austria's stamp for the song's sesquicentennial. 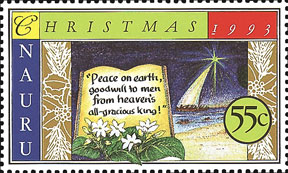 Figure 6. The first of Nauru's 1993 pair of Christmas issues used lines from a carol to wish for peace on earth. 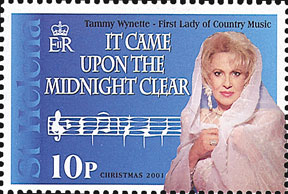 Figure 5. In 2001, stamps from St. Helena used lyrics from carols and an image of American country singer Tammy Wynette. 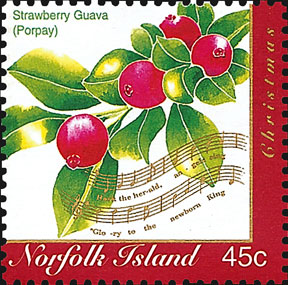 Figure 4. Norfolk Island joined Christmas songs with holiday plants on a 2001 set, with "Hark the Herald Angels Sing" and a strawberry guava on Scott 748. 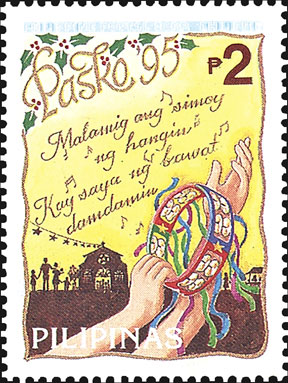 Figure 3. Here is the low value of a set of 1995 stamps from the Philippines, which paired first lines of carols in Tagalog with musical instruments. 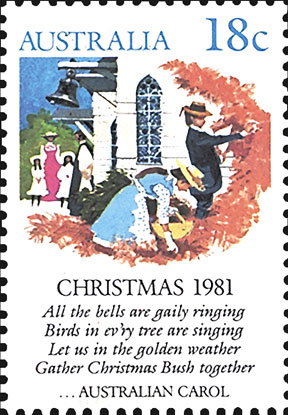 Figure 2. Uniquely Australian carols were featured on three Christmas stamps from that country in 1981. This is "Christmas Bush for His Adorning." 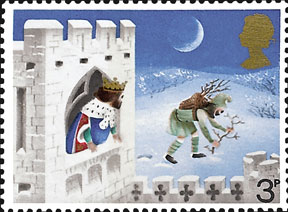 Figure 1. Great Britain's 1973 Christmas set told the story of "Good King Wenceslas," gazing from his castle on the feast of St. Stephen on the first
Previous
Next

As I write this, it is not yet Thanksgiving, and yet today Christmas carols were playing in my grocery store.

Christmas shopping and celebrations seem to start earlier each year. The Christmas music, however, is welcome, and I'm pleased to note that Christmas music has made appearances on many stamps from around the world. Most of these illustrate classic carols that focus on the biblical account of the birth of Jesus. Others convey universal themes such as peace, joy, sharing and hope.

Great Britain has issued several Christmas-carol stamps, beginning with its first in 1973: a set of six (Scott 709-14) that tell the story of "Good King Wenceslas" in pictures that the 1853 carol provides in verse.

Figure 1 shows Scott 709, which illustrates the verse "Good King Wenceslas looked out on the feast of Stephen." The feast of St. Stephen is the day after Christmas, Dec. 26.

The wintry weather was blisteringly cold and snowy, and the king could see a poor man in the distance gathering fuel for a fire to keep warm. The page left the castle and began collecting food and wood to share with the peasant who needed it, in a progression of actions depicted on the stamps.

The last line of the carol is the moral of the story: "Therefore, Christian men, be sure wealth or rank possessing, ye who now will bless the poor shall yourselves find blessing."

In 1982 Great Britain issued five more Christmas-carol stamps (Scott 1006-10), each one portraying a different song: "While Shepherds Watched," "The Holly and the Ivy," "I Saw Three Ships," "We Three Kings" and an encore performance of "Good King Wenceslas."

Australia's 1981 Christmas stamps (Scott 811-13) featured three carols by William James (music) and John Wheeler (lyrics), who collaborated to create uniquely Australian Christmas music, with traditional themes in "outback" settings. Figure 2 shows Scott 811, illustrating the song "Christmas Bush for His Adorning." The other stamps in the set depict "The Silver Stars are in the Sky" and "Noeltime."

The idea of making holiday songs appropriate for Australian Christmas, with Dec. 25 in the middle of summer, was carried out with references to Australian flora and fauna. James and Wheeler collaborated on six such carols, and while James composed many other works, the carols are his most enduring pieces and are still in music catalogs today.

One example would be the four Christmas-carol stamps issued in 1995 by the Philippines (Scott 2380-83), each featuring a different musical instrument and the first line of a Filipino Christmas song written in Tagalog.

Figure 3 shows Scott 2380, for the song "Himig ng Pasko" ("The Sound is Christmas"), with a tambourine. The illustrated line, "Malamig ang simoy ng hangin kay saya ng bawa't damdamin," translates to, "The breeze is so cold, joyful is every feeling."

Figure 4 shows Scott 748, "Hark, the Herald Angels Sing" with a strawberry guava, festive in its green leaves and red fruit.

The Norfolk pine appears on the 2004 Christmas set (Scott 827-30) from Norfolk Island, combined with lyrics from "Silent Night," "'Twas the Night Before Christmas," "On the First Day of Christmas" and "Oh Holy Night."

A somewhat perplexing set of Christmas-carol stamps was issued by St. Helena in 2001 (Scott 779-82). Figure 5 shows the first stamp of the set, each of whose designs include the first line of a traditional Christmas carol, the first bars of the carol's musical notation and a portrait of Tammy Wynette (1942-98), the famous American country singer.

Wynette did indeed leave a beautiful Christmas album as part of her legacy, but one wonders how the dots connected that album to the South Atlantic island of St. Helena.

Nauru's 1993 Christmas stamps (Scott 406-07) also had musical themes. Figure 6 pictures a 55¢ stamp with an open book showing lines from the first verse of "It Came upon a Midnight Clear," in which "that glorious song of old" includes wishes for peace on Earth (406). The second stamp in the set uses a design from "Hark the Herald Angels Sing."

One of the best-loved Christmas songs of all time originated in 1818.

Joseph Mohr, then assistant pastor at the church of St. Nicholas in Oberndorf, Austria, had written a poem called "Stille Nacht, Heilige Nacht" ("Silent Night, Holy Night") several years earlier, and he asked the St. Nicholas choir director and organist, Franz Gruber, to compose music for the words, for two solo voices accompanied by a guitar and choir.

"Stille Nacht" was performed for the first time at St. Nicholas for Christmas midnight mass on Dec. 24, 1818, by Mohr and Gruber with the choir.

Austria issued a stamp (Scott 558) for the 130th anniversary of "Silent Night" in 1949. The stamp features portraits of lyricist Mohr and composer Gruber.

Twenty years later, Austria commemorated the 150th anniversary of the beloved carol with a stamp (Scott 823, Figure 7) picturing the creche at the Silent Night Memorial Chapel in Oberndorf.

The stamps cited here are only a few of the many attractive worldwide stamps relating to Christmas music. Assemble a collection with this theme and listen closely, you may hear yourself singing along with your stamps.