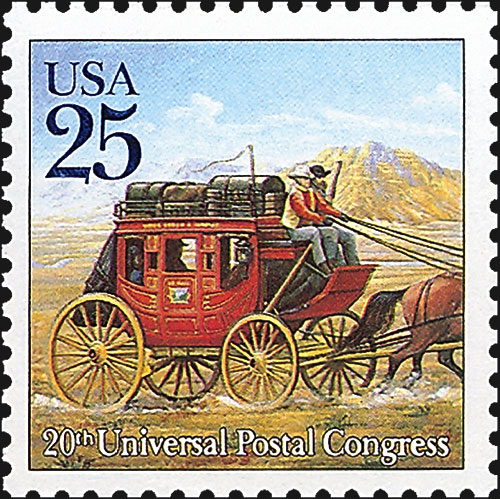 Figure 9. A Concord stagecoach is depicted on a U.S. stamp issued in 1989. 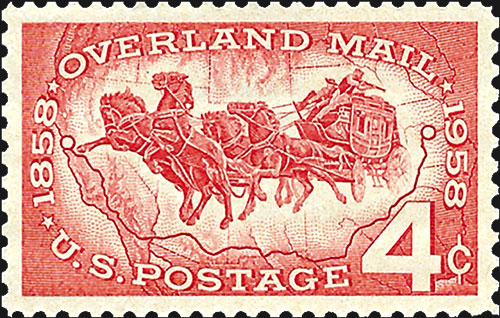 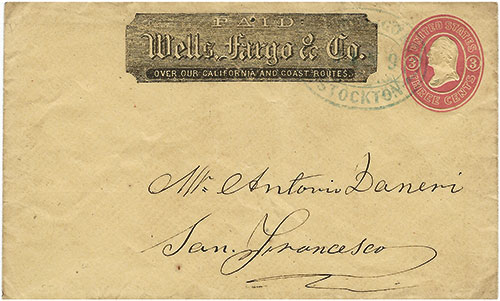 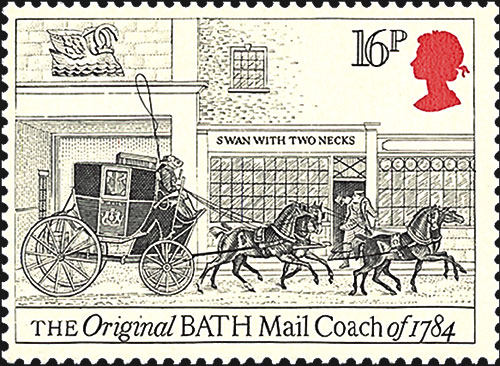 Figure 6. Great Britain honored the bicentennial of the Bath-Bristol-London mail coach on this 1984 16-penny stamp. 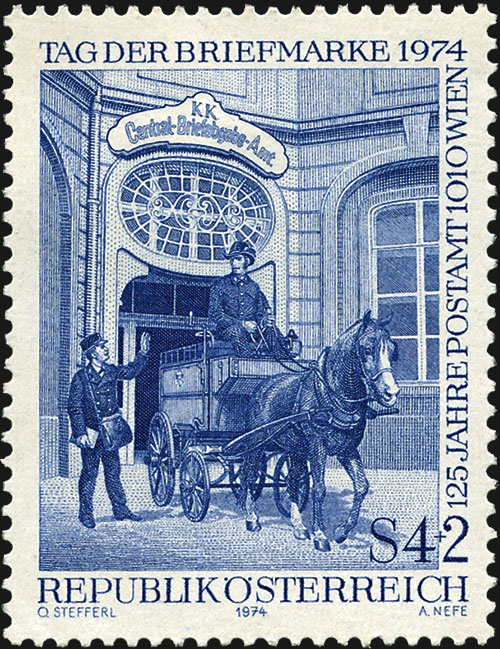 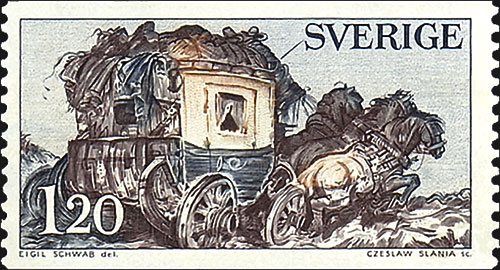 Figure 4. A mail coach drawn by three horses is featured on a 1971 stamp from Sweden. The post horn symbol can be seen on the door of the coach. 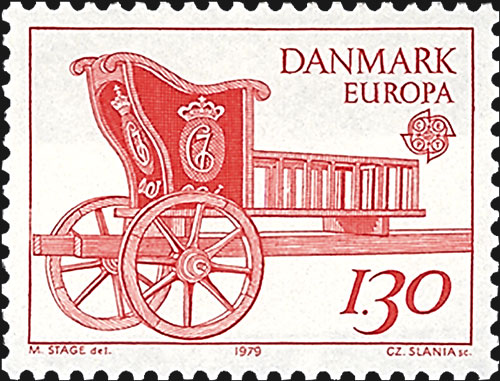 Figure 3. An early two-wheel mail cart is illustrated on a 1979 stamp from Denmark. 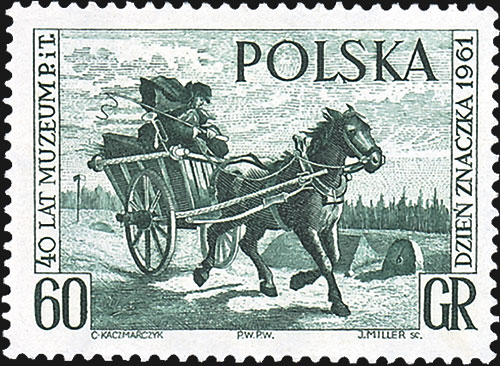 Figure 2. A 1961 Polish Stamp Day commemorative shows a painting of a two-wheel mail cart drawn by a single horse. 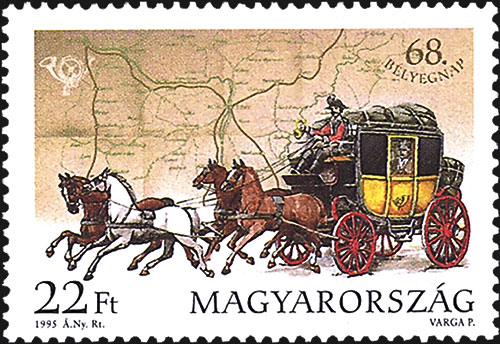 Figure 1. A 1995 stamp from Hungary illustrates a mail coach pulled by a team of four horses. A post horn is shown in white at upper left in the stamp design.
Previous
Next

Postal services the world over have used a dazzling assortment of methods to move mail from sender to recipient.

Although horse-drawn wheeled vehicles have existed for thousands of years, the earliest mention of a mail coach was in 1566, when the Duke of Bavaria traveled in a vehicle he called a mail coach.Mail carriers on foot and on the backs of animals were the earliest conveyors of the post, but as written communications became more common, wheeled vehicles drawn by horses were used to transport mail.

The word coach comes to us from Hungary. A vehicle drawn by three horses was developed in the Hungarian village of Kocsi, which is pronounced "ko-chee," and is now known as Kocs.

The horse-drawn vehicle was named for the village, and the name was Anglicized to coach.

Mail coaches were put into use in many European countries in the late 17th century. Shown in Figure 1 is a stamp issued by Hungary for Stamp Day in 1995 (Scott 3506). The mail coach depicted is pulled by a team of four horses.

The white horse in the lead at left often would be mounted by a rider called a postilion who would sound the post horn to alert the townspeople that the mail coach had arrived. If there was no postilion, the post horn was blown by the coachman driving the team.

A post horn appears in the upper left corner of the stamp.

Larger mail coaches carried passengers as well as mail, but large coaches were not the only horse-drawn wheeled vehicles that carried mail. Poland issued a stamp in 1961 showing a horse-drawn mail cart (Scott 1018).

The stamp, pictured in Figure 2, commemorates the 40th anniversary of the Polish postal museum.

The two-wheeled cart was pulled by a single horse and afforded just enough space for a rider and a sack of mail in a basket-like platform.

Compare the simple Polish mail cart with the grand mail coach from Sweden shown in Figure 4. That stamp reproduces a 1928 painting by Eigil Schwab, masterfully engraved by Czeslaw Slania (Scott 751A). You can tell this is a mail coach from the post horn image on the door of the coach. This coach is drawn by a team of horses galloping three abreast.

A nearly photographic image of an Austrian one-horse mail coach leaving a PTT (Post, Telegraph, Telephone) office was issued on a 1974 semipostal stamp, shown in Figure 5.

Great Britain issued a set of Mail Coach stamps in 1984. Each of the five stamps illustrates a coach used on a specific mail route. The stamp pictured in Figure 6 (Scott 1062) shows the Bath-Bristol-London mail coach of 1784, quite an early depiction of a mail coach.

American stagecoaches were largely based on the British model. The term "stagecoach" derives from the way a coach traveled in stages from station to station.

Arguably, the most well-known stagecoach routes were operated by Wells, Fargo & Co., and known as the Butterfield Overland Mail, named for John W. Butterfield, the Wells, Fargo president.

The Overland Mail had contracted to carry mail twice a week for the U.S. Post Office. It operated for five years with routes that began in St. Louis, traveled southwest through Texas to Los Angeles, through central California and ending in San Francisco, taking approximately 25 days to complete.

Figure 7 shows a typical Wells, Fargo paid frank on a U.S. embossed envelope. Both the frank and the embossed indicia are struck with a Wells Fargo Stockton (California) postmark dated "Jan 9."

The Overland Mail service centennial was commemorated in 1958 by the U.S. Post Office Department with the stamp shown in Figure 8 (Scott 1120).

A later stamp, pictured in Figure 9, does full justice to the famous Concord stagecoach that was drawn by a team of six horses (Scott 2434). This 25¢ stamp was issued Nov. 19, 1989, as part of a set showing traditional mail delivery and commemorating the 20th congress of the Universal Postal Union.

In his travelogue Roughing It, Mark Twain described his ride in a Concord stagecoach: "Our coach was a swinging and swaying cage of the most sumptuous description — an imposing cradle on wheels. It was drawn by six handsome horses, and by the side of the driver sat the 'conductor,' the legitimate captain of the craft; for it was his business to take charge and care of the mails, baggage, express matter, and passengers. We three were the only passengers this trip. We sat on the back seat, inside. About all the rest of the coach was full of mail bags."

By the late 19th century, most of the world's mail coaches were disappearing in favor of intercity railway mail service, motorized buses, trucks and, a few decades later, aircraft.