United States definitives form the basis for many collections 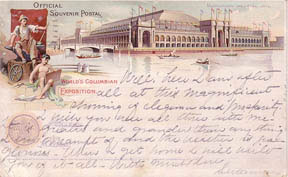 Figure 4. The first U.S. forever stamp was issued in 2007. The forever stamp can always be used on first-class letter mail, regardless of any rate changes. 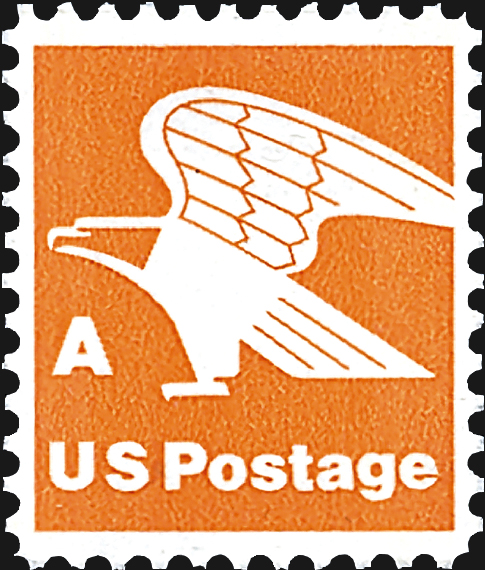 Figure 3. Some U.S. definitives show a single letter or a service indicator representing a postage rate rather than a numerical denomination. The 1978 A-rate Eagle stamp has a face value of 15¢. 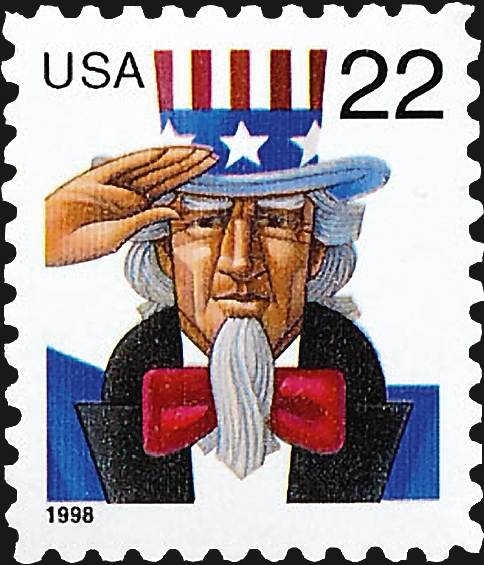 Figure 2. The 22¢ Uncle Sam stamp issued in 1998 doesn’t belong to any set or series, although there are three major varieties and a few minor varieties. 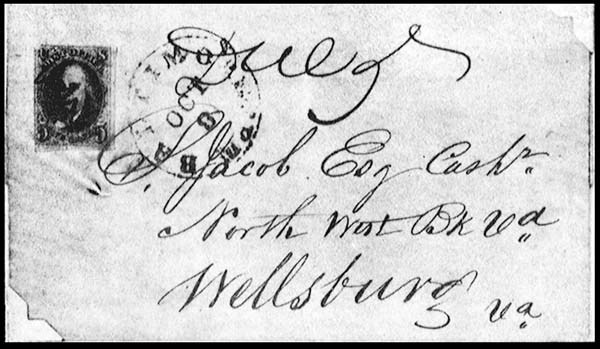 Figure 1. Both the 3¢ Thomas Jefferson stamp, first issued in 1932, and the 2¢ Navajo Jewelry issue of 2004 belong to larger definitive stamp series.
Previous
Next

Many collectors begin enjoying the stamp hobby by collecting stamps that are used as everyday postage.

Such stamps are known as definitive stamps.The stamps seen most commonly on United States mail are smaller stamps with designs featuring flags or similar patriotic symbols, though other design elements such as flowers are also used on these regular issues from time to time.

Definitives are regular-issue stamps that are returned to press repeatedly as the need arises. Many definitive stamps remain on sale at post offices for years before new issues are created to replace them.

Today, definitive stamps are commonly sold in self-adhesive panes of 20 with stamps on both sides, though they also exist in coils and other formats.

Different factors have affected how U.S. definitive stamps are produced, including postage rates that now change nearly every year, and the introduction of stamps that have no numerical denomination.

From 1932 to 1958, the domestic letter rate in the United States was 3¢ per ounce. That's more than a quarter of a century without a rate change.

When the U.S. Presidential definitive stamps were issued in 1938, the series included a 3¢ deep violet stamp honoring President Thomas Jefferson (Scott 807). That stamp was used for so many years and returned to press so many times that it became one of the stamps that U.S. collectors encountered most frequently.

Even today, more than 75 years later, that 3¢ Thomas Jefferson stamp is considered common and has a minimal value in the Scott Specialized Catalogue of United States Stamps and Covers. The 3¢ Jefferson stamp is shown at the top in Figure 1.

Although this standard issue has little monetary value, the fact that it was available for so long adds to its collectibility in ways you might not consider.

There are standard varieties to look for, including a coil version (Scott 842) and a booklet version in a pane of six (807a).

More valuable varieties include errors, such as imperforate pairs and booklet panes that are vertically imperforate between. Collectors also can look for coils with large holes and small holes, paper varieties, perfins and 30 different Bureau precancels.

Not bad for a common stamp. Add in examples of the stamp used on letters and parcels to pay various rates — a collecting area known as postal history — and you could build a specialized collection of the 3¢ Thomas Jefferson stamp that would keep you engaged for years to come.

The Presidential definitive series consists of 32 different designs ranging in face value from ½¢ to $5. Most of the stamps depict U.S. presidents, though the ½¢ stamp shows Benjamin Franklin, the 1½¢ stamp honors Martha Washington and the 4½¢ stamp depicts the White House.

The stamps in the series share similar design features, which is often the case with definitive series.

Even today, some U.S. definitive stamps have low denominations, such as the 2¢ Navajo Jewelry stamp first issued by the U.S. Postal Service in 2004 (and still in use today, nearly 10 years later).

The 2¢ stamp (Scott 3750) is shown at bottom in Figure 1. It is part of a current definitive series known as the American Design series. The 1¢ stamp in this series shows a Tiffany lamp, the 3¢ stamp depicts a silver coffeepot, the 4¢ stamp shows a Chippendale chair, the 5¢ stamp shows a toleware coffeepot, and the 10¢ stamp features an American clock.

There are numerous varieties in this series as well, including coils and sheet stamps, self-adhesive stamps and lick-and-stick varieties, different year-date sizes, and even imperforate errors.

While the Jefferson and Navajo Jewelry stamps are both part of larger series, some definitives are individual issues not associated with other stamps.

That is the case with the 22¢ Uncle Sam stamp pictured in Figure 2.

The Uncle Sam stamp was first issued in 1998 to pay for the second ounce of first-class letter mail. A new postage rate changed the cost of mailing a letter to 33¢, but if the letter weighed more than one ounce, an additional 22¢ in postage was required for each additional ounce.

Two self-adhesive varieties of the stamp were issued initially, in a pane of 20 (Scott 3259) and in a coil (3263). A perforated 22¢ Uncle Sam coil with moisture-activated adhesive was issued about a year later (3353).

These Uncle Sam stamps don't really resemble any other stamps issued around the same time, and they are not part of any definitive set or series issued during the 1990s.

Since the late 20th century, many U.S. definitive stamps have not had numerical denominations.

Beginning in the 1970s, some stamps were issued with letter designations to represent a certain rate. These nondenominated stamps were created by the U.S. Postal Service so it would have stamps at the ready when a rate was about to increase, but when the value of that new rate was not known far enough in advance to create denominated stamps.

The stamp shown in Figure 3 is the A-rate Eagle stamp issued in 1978 (Scott 1735). It had a postage value of 15¢ when issued, and that is still its postage value today.

In later years, some nondenominated stamps were issued with no message at all, or with the inscription "first-class." These stamps also retain only the postage value they had when issued, and no more.

Most U.S. letter-rate stamps issued today are forever stamps, inscribed with the word "forever" instead of a numerical denomination. The first forever stamp was a Liberty Bell definitive issued in 2007. An example (Scott 4125) is shown in Figure 4.

Forever stamps are sold with a certain value. They can be used for postage on regular letter mail immediately or anytime in the future, regardless of any postage rate increases.

The Scott U.S. specialized catalog lists the many U.S. definitive stamps that have been issued, and includes an illustrated identifier of definitive issues that runs for more than 30 pages in the catalog introduction.

Paging through the identifier gives you an idea of how many different U.S. definitives have been issued, and how much variety there is among U.S. definitive stamp designs and formats.