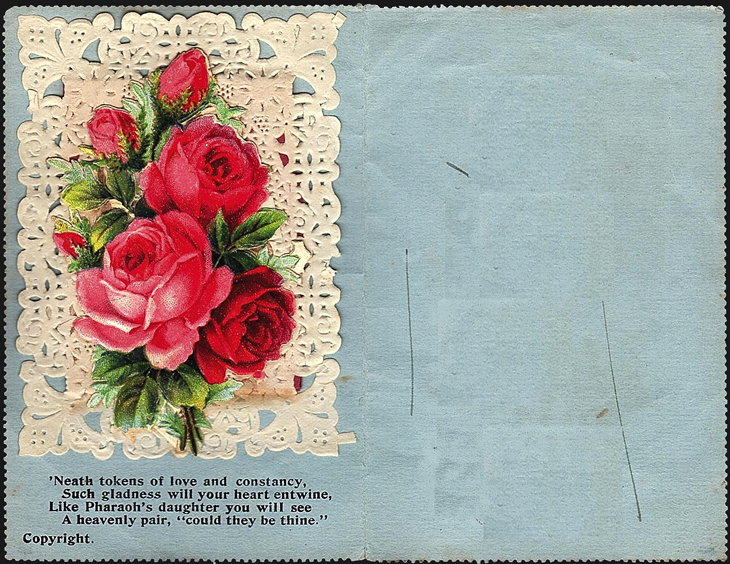 The plain letter card shown in the previous illustration contained a flowery valentine inside. 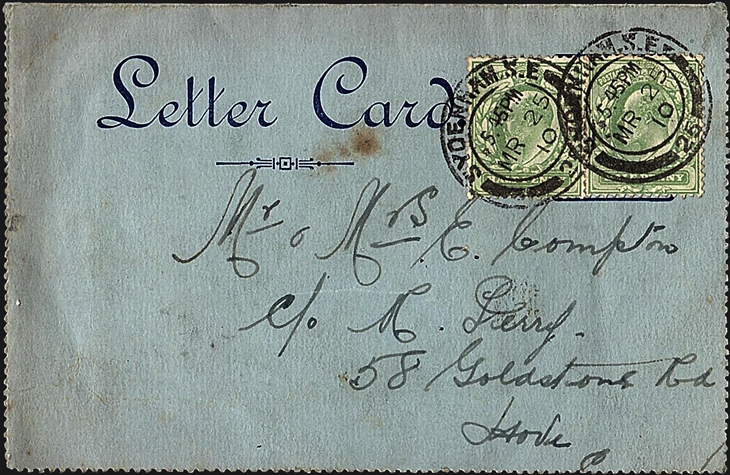 Letter cards were a cross between envelopes and postcards, with the messages sealed inside. This letter card sent from suburban London to seaside Hove in 1910 had a secret. 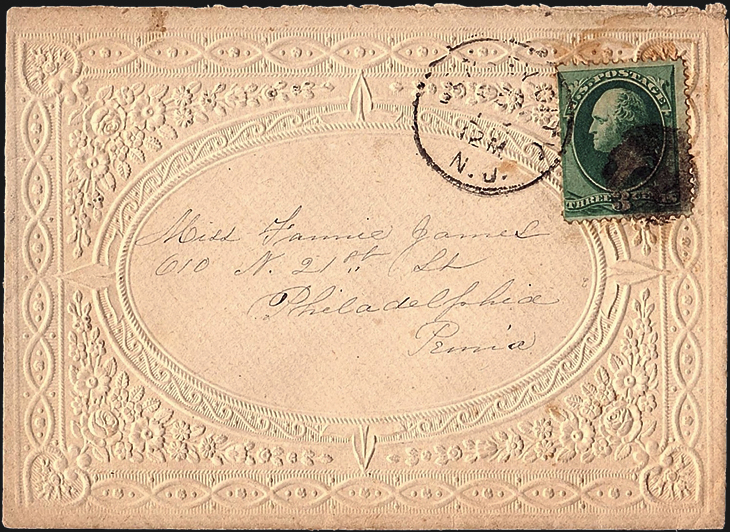 This heavily embossed cover for a valentine was mailed from Jersey City, N.J., to Philadelphia, Pa., in the 1870s. The cover bears a Philadelphia backstamp of Feb. 13, the day before Valentine’s Day. 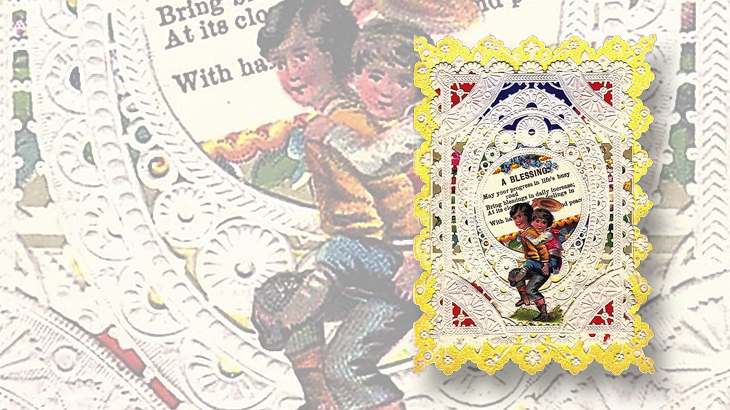 The envelope shown in the first illustration still contained its valentine card: not romantic but conveying good wishes. 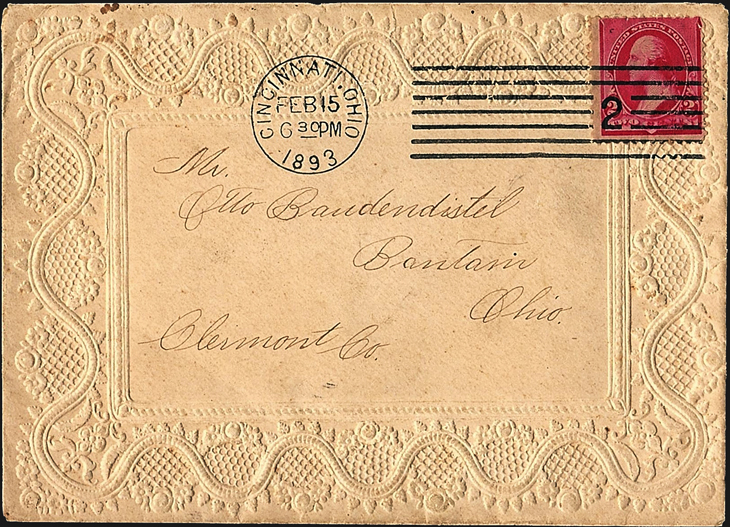 This embossed valentine cover was mailed from Cincinnati to Bantam, Ohio, the day after Valentine’s Day in 1893, but the recipient must have been pleased, since the envelope was saved.
Previous
Next

The origins of valentines allegedly lie in the late Middle Ages, in the form of handwritten romantic poems exchanged by lovers.

The earliest recorded valentine written in English, in 1477, was in the form of a letter sent by a British woman, Margery Brews, to her beau, John Paston. This valentine and its transcription can be viewed on the British Library website. You also can listen to a woman reading the message of love in the Old English language.

Valentine’s Day is actually a Christian feast day honoring St. Valentine on the day he is believed to have been martyred. There are many legends about Valentine, but the one most pertinent to the tradition of romantic messages has him writing a letter to a young girl with whom he had fallen in love while interned in a Roman prison for helping Christians escape cruel Roman imprisonment. Valentine is credited with signing his last letter to the girl using the words “from your Valentine.”

Other legends attribute the Feb. 14 date for Valentine’s Day to a pre-Roman pagan fertility festival called Lupercalia. This theory fits right in with love and passion.

By the middle of the 19th century, valentines transformed from being handwritten poems or letters into beautifully printed greeting cards with fancy envelopes (also known as covers to stamp collectors). A valentine cover with heavy embossing is shown in the first illustration here. It was sent from Jersey City, N.J., to Miss Fannie James in Philadelphia.

The postmark is unclear because it straddles the embossing, but luckily there is a Philadelphia backstamp of Feb. 13. During this period, United States postmarks generally did not have the year within the marking, but the 3¢ green Washington postage stamp dates it to the mid-1870s. It doesn’t always happen that the valentine is still inside its cover, but in this instance it was, and is shown in the second illustration: layers of lacy embossed papers in a variety of colors and the wish of “A Blessing.”

The young man who sent this to Miss James spoke not of love but of peace and harmony; however, for the valentine to be in such good condition after nearly 150 years, it must have been cherished by generations. In fact, it still is.

Many nations have issued prestamped letter cards, a form of postal stationery. Letter cards look like postal cards, but they are folded in half and a private message can be written inside. The letter card has three open edges that have adhesive borders so the message can be sealed. The borders have perforations, making it easy for the recipient to open the letter card.

In the fourth image is a letter card sent March 25, 1910, from Sydenham, a suburb of London, to Hove, on the south coast of England. The recipients must have been surprised when they removed the perforated borders and opened the letter card to find it was the valentine shown in the last illustration. It arrived rather late, but with loving prose and many layers of embossed cut paper and paper roses.

These elaborate valentines were a product of the romantic Victorian era. One of London’s most revered shops was that of Eugene Rimmel, perfumer and cosmetics creator. His fragrances were extravagant, and he made certain that the packaging was equally sumptuous. It was his packaging that led Rimmel to the production of scented valentine cards. He hired young women to make the cards, and as their talent grew, the cards became more flamboyant and in even greater demand. An online exhibit of eye-popping Rimmel valentines can be found on the National Valentine Collectors Association website at www.valentinecollectors.com. The association also has posted one of its newsletters containing an article about Rimmel.